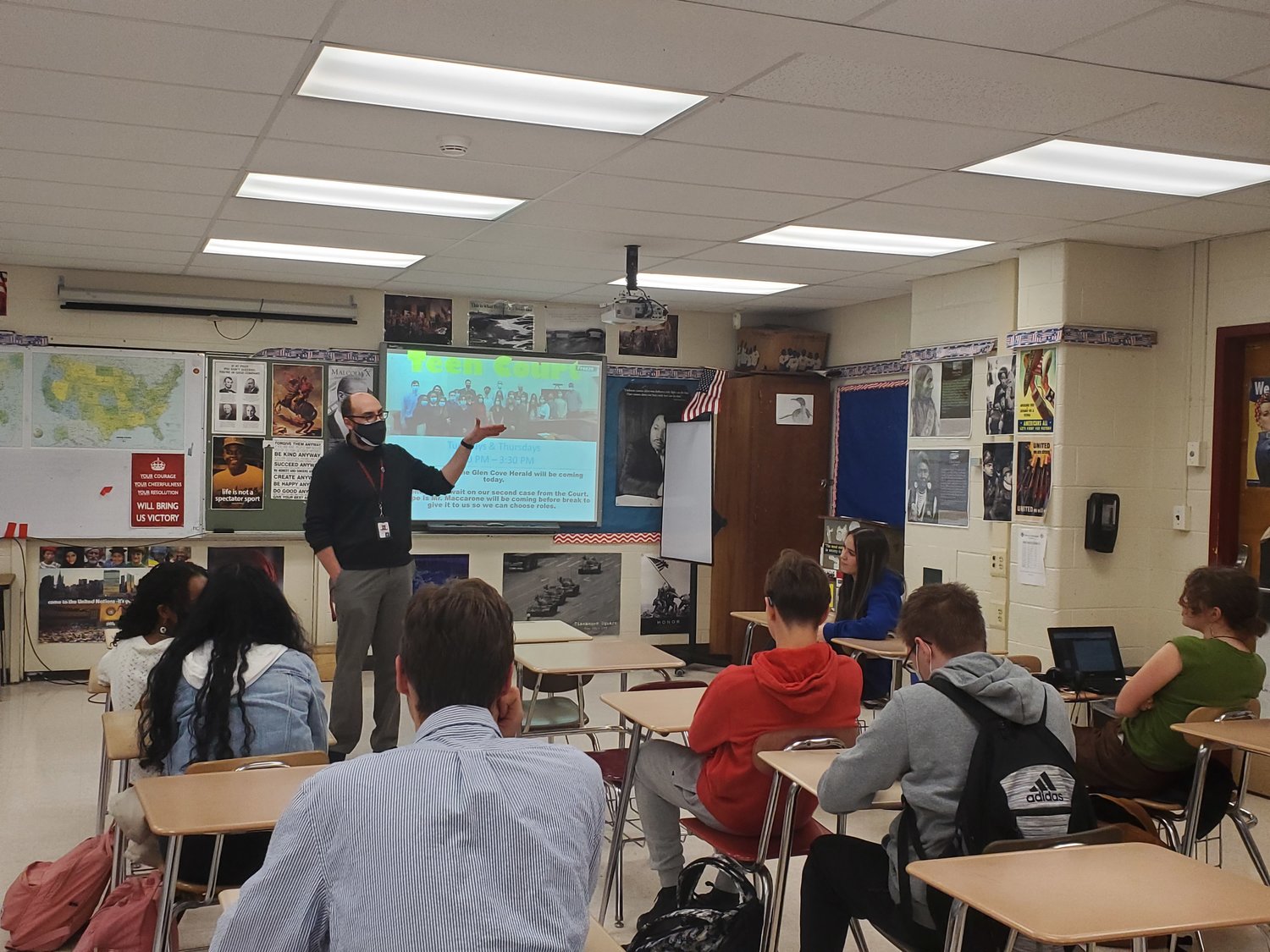 Since its inception in 2002, Glen Cove’s Teen Court program has gained statewide attention for its unique and hands-on approach to educating high school students about the judicial system. This half-credit after school elective allows students to actively participate in real trials of cases involving teenage offenders.

It is City of Glen Cove Judge Richard J. McCord and the Nassau County District Attorney’s office who decide which first offender teenagers arrested for crimes in Glen Cove will have the opportunity to go through the Teen Court program for peer mediation.

The program is directly supervised by McCord and long-time Glen Cove attorneys John and Kevin Maccarone, specialists in criminal law. They work closely with Glen Cove High School teacher and Teen Court advisor, Christopher Contorno to prepare students for trials by sharing their knowledge of the legal process and ensuring that the arguments and statements are legally valid. With their combined supervision, the students alternate as judge, juror, prosecution and defense after each trial period. Currently, there are 30 student members of Teen Court.

“This year we had so many students that we didn’t have enough roles for all of the students,” Contorno said. “We had our highest enrollment this year.”

Due to the increased popularity of Teen Court, this year’s program has incorporated the use of student mentors, GCHS seniors who have prior experience in the program and want to continue participating.

“I think  public speaking and a general knowledge of how courts work is good for students to have going into college and going into adult life, especially if you’re going to continue in mock trial in college or for a law degree,” said Colin Gallagher, 18,  a Glen Cove High senior and mentor. “Also in life, having a basic understanding of legal proceedings, how to speak and present formally, is just good for people to have”

Typically, Teen Court participant see two cases in the first half of the school year and two cases in the later half. The program was briefly suspended because of the pandemic but resumed this past September, which Contorno said caused slowdowns in the court system. As a result, trial dates and selections were briefly halted this school year.

Teen Court’s last two cases took place at Glen Cove City Court on Feb. 15 and March 22. The case in February included a defendant charged with harassment and criminal mischief, while the defendant in March was charged with numerous moving violations including reckless driving, leaving the scene of an accident and driving with a suspended license.

Contorno, who has been with the district for 14 years as a history teacher, has also taught mock trial. He said exposing students and youth offenders to the legal process and allowing both parties to have a learning experience is essential to judicial education.

“It’s really nice to be a part of it and get the kids this kind of experience and I hope it continues on for years to come,” Contorno said. “The kids really like it too.”

McCord’s long-time motto is: “Education is the best form of crime prevention.” His goals for Teen Court are to give participants familiarity with the court system, while learning first-hand the repercussions of violating the law, Additionally he hopes to make the proceedings less frightening and more educational for youthful offenders with penalties that are appropriate to the violation.

“This is the first year where we’ve had student mentors and I was very impressed with it. These kids take this very seriously,” McCord said. “They’re very well prepared.”