'The Wall that Heals' comes to East Meadow 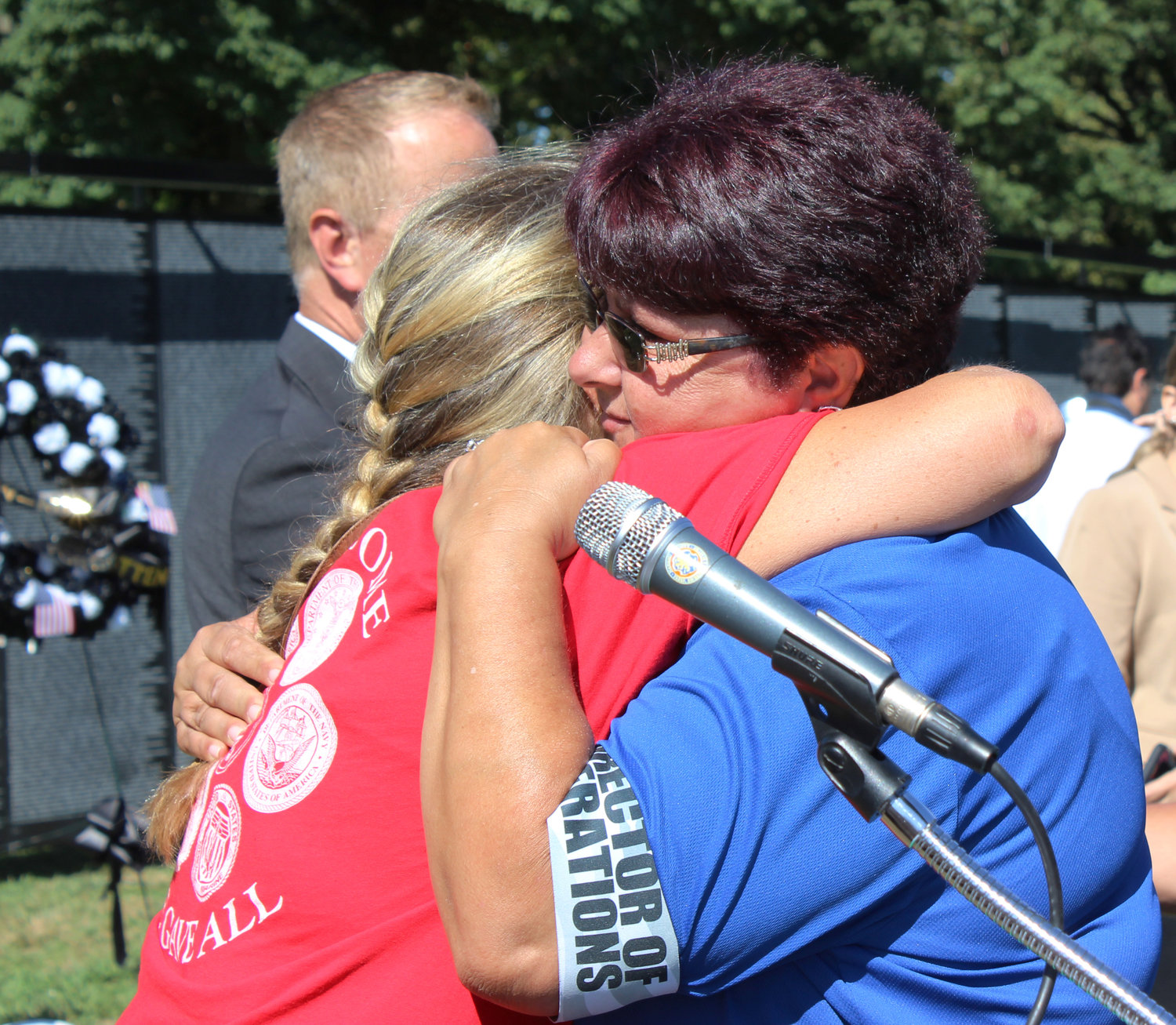 Virginia Cervasio, 61, of Glen Cove, right, is the founder of the nonprofit Heroes Among Us, which hosted “The Wall that Heals” at Eisenhower Park. She greeted guests at the opening ceremony of the 375-foot-long, three-quarter-scale mobile replica of the Vietnam Veterans Memorial.
BRIAN STIEGLITZ/HERALD 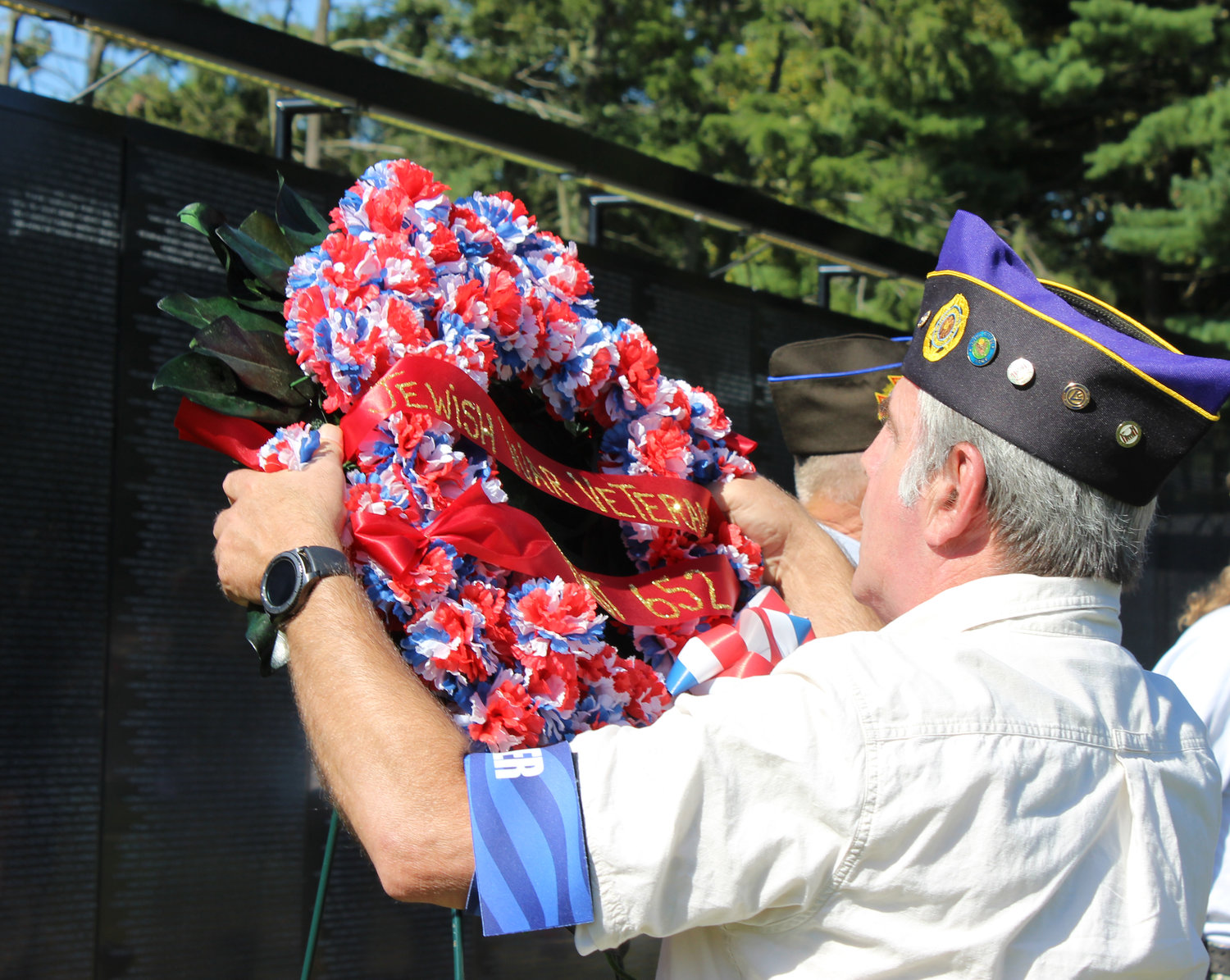 The ceremony included a placing of wreaths for local veterans organizations. Representing the Jewish War Veterans Post 652 was Gary Glick, its commander and a veteran from North Merrick.
BRIAN STIEGLITZ/HERALD 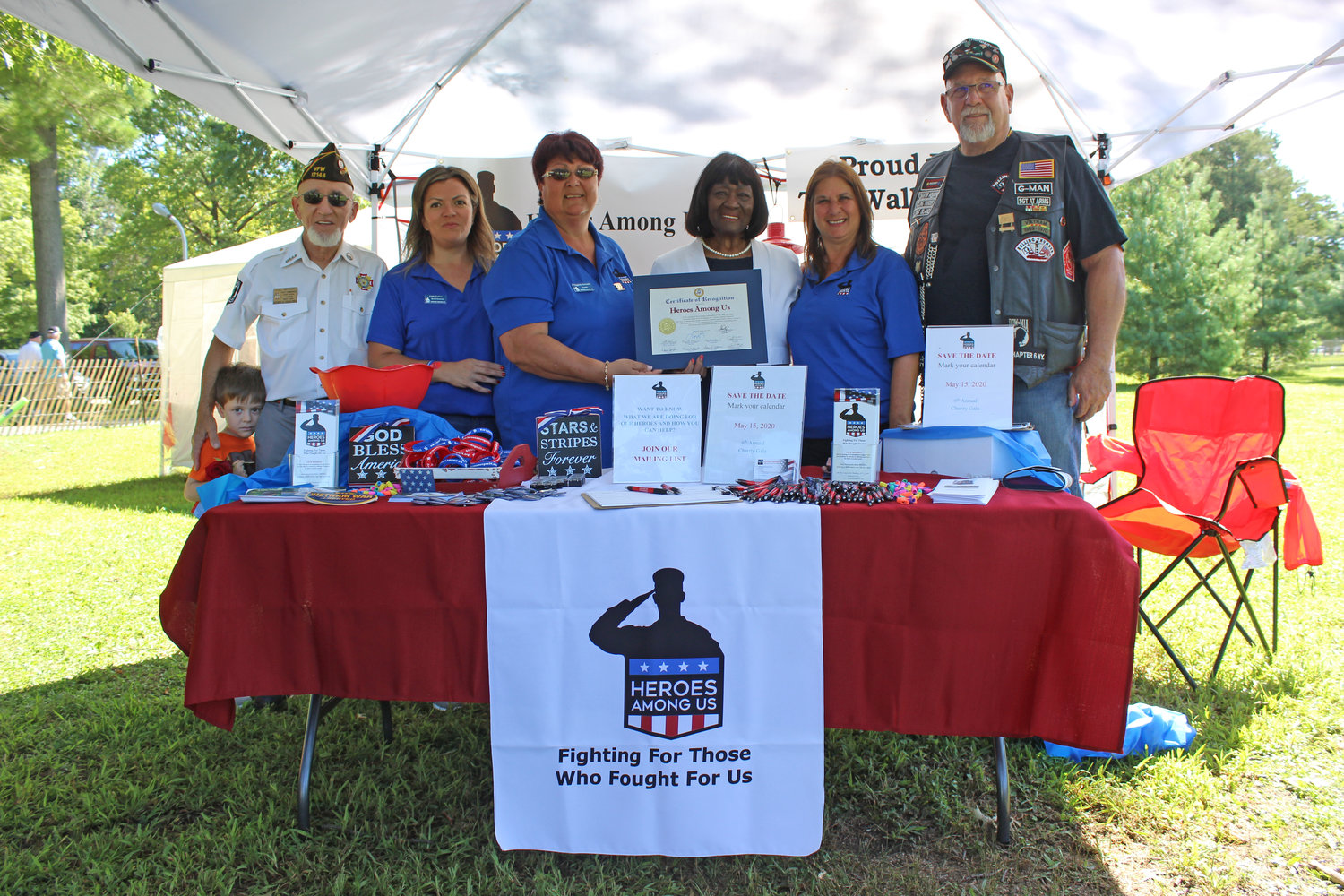 Virginia Cervasio, third from left, received a certificate of recognition from Hempstead Town Councilwoman Dorothy Goosby, third from right, for hosting the wall. With them were with Grayson Knott, 4, far left; his grandfather Joel Meyers, the commander of Veterans of Foreign Wars Post 12144; Lidia Jordan, the secretary of Heroes Among Us; Barbara Cohen, a board member of the organization; and Joe Ingino, a charter member of the veterans advocacy group Rolling Thunder.
BRIAN STIEGLITZ/HERALD 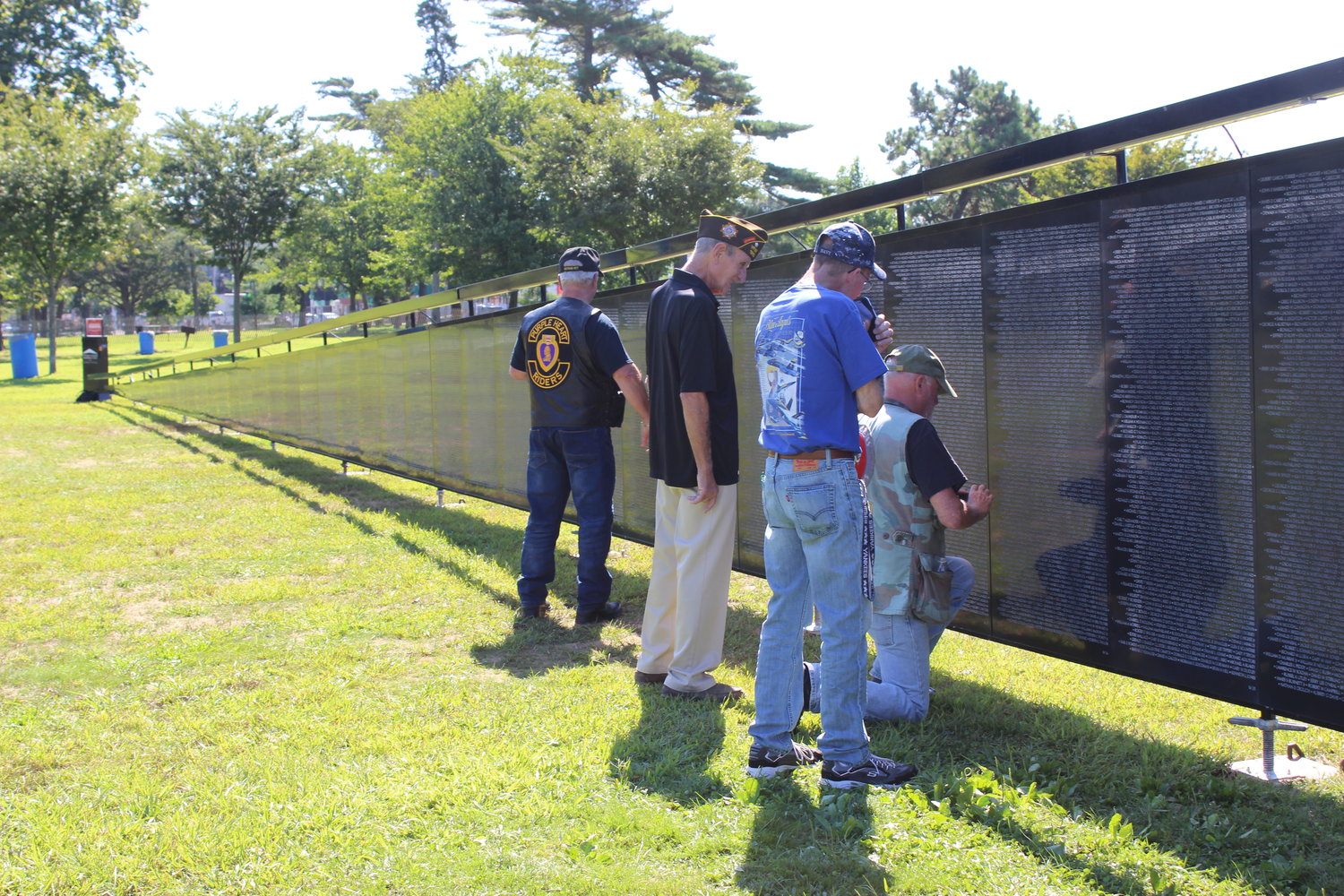 The memorial moves to another state each month, where people can see it without having to travel to Washington to see the original.
BRIAN STIEGLITZ/HERALD 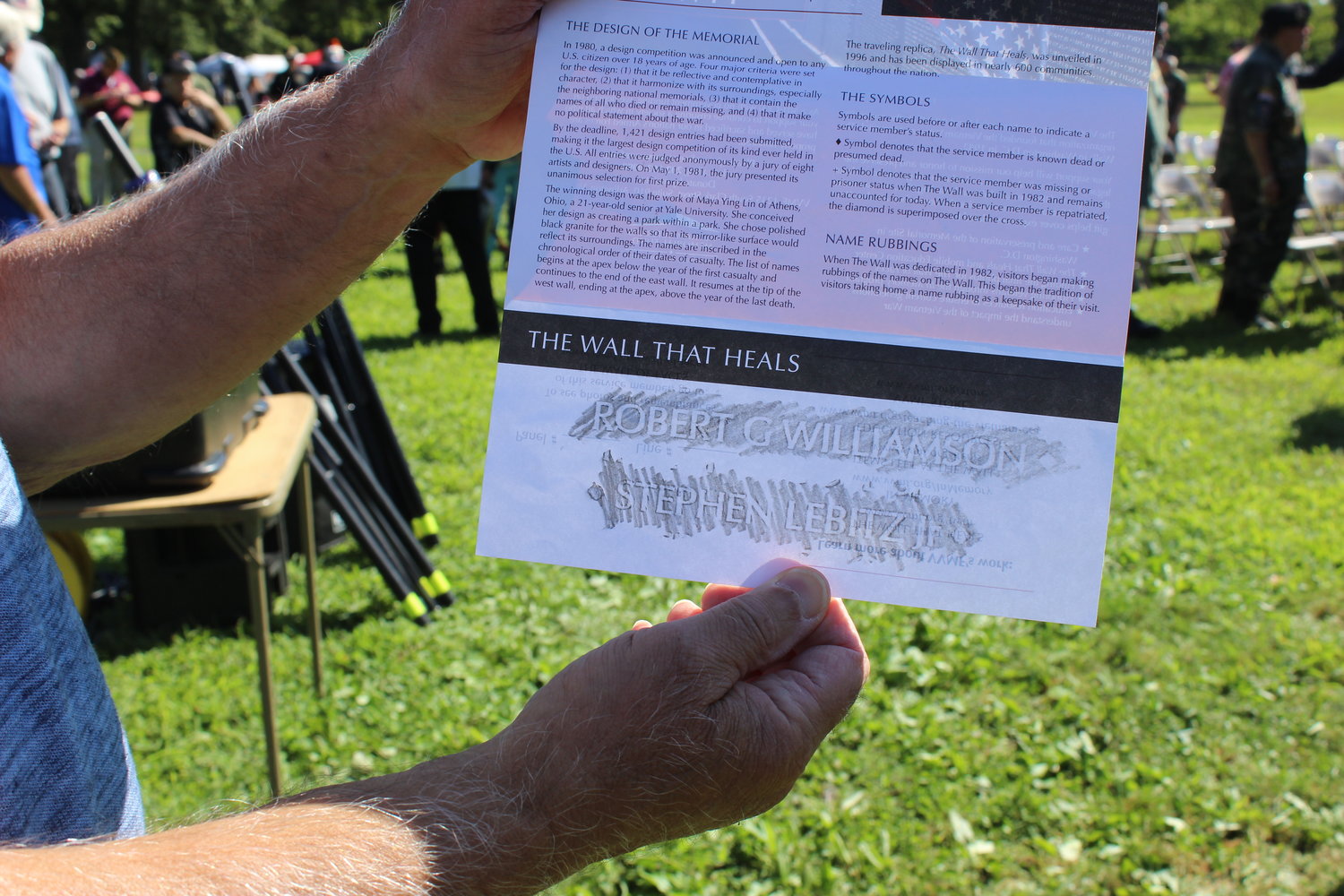 Louis Kaplan, of Deer Park, is a Vietnam veteran who had the chance to “honor some old friends,” he said — Robert Williamson and Stephen Lebitz — and create rubbings of their names.
BRIAN STIEGLITZ/HERALD
Previous Next
By Brian Stieglitz

Volunteers worked for roughly five hours, some of that time in hammering rain, in Eisenhower Park on Aug. 28 to assemble the pieces of a 375-foot-long, three-quarter-scale mobile replica of the Vietnam Veterans Memorial.

Know as “The Wall that Heals,” the memorial moves from one state to another each month, where it is hosted by a local organization, offering people a chance to see it without having to travel to Washington, D.C., to see the original.

“It is my hope that veterans will find healing when they visit the wall,” said Virginia Cervasio, 61, of Glen Cove, who founded the nonprofit Heroes Among Us, which hosted the most recent display of the memorial. She introduced it to hundreds of guests at an opening ceremony on Aug. 29, which included a placing of wreaths by local veterans organizations and elected officials who supported the wall’s appearance in East Meadow.

“This would have not happened if it weren’t for the town, county and everyone who helped put it together,” Cervasio said.

She launched Heroes Among Us in 2014 to help veterans readjust to life after war by connecting them with financial, social and medical resources for them and their families. She initially met with veterans at her home, but now works out of an office on Old Country Road, between Westbury and Salisbury.

Heroes Among Us has helped veterans pay their bills, helped them find therapists and organized school-supply drives for their families, among other services. Each May it hosts a gala to raise funds for its work, honor veterans who have died and recognize those who have contributed to their community.

Cervasio applied to host the traveling Vietnam memorial last fall, and has prepared for its arrival since she was notified that a stop in East Meadow had been OK’d by the Vietnam Veterans Memorial Fund in November. But her activism began long before she launched Heroes Among Us.

Her son Angelo joined the Air Force shortly after graduating from Locust Valley High School in 2000, and served as an airman 1st class during Operation Southern Watch in Iraq for three years before he was stationed in Oklahoma City for the remainder of his service.

When Angelo returned from the Middle East, he “didn’t want to talk about anything,” his mother recalled. “His whole character was different.” In 2006, six months after his discharge, he died by suicide. He was 24. His mother shared his story at the wall’s opening ceremony, explaining that she wanted to “continue his legacy” by starting her nonprofit.

Cervasio has spent the past five years helping veterans assimilate to life after war, but in hosting the wall, she said, she hoped to commemorate those who didn’t make it that far. “No matter how many years have passed, we are left with a void in our hearts,” she said, pausing to hold back tears, and implored the crowd to find names of loved ones on the wall and reflect on their lives, their passions, what made them laugh and their proudest achievements. “I hope it will bring you healing,” she said, “to know that I consider each and every one of them my hero.”

The wall began its local appearance on Aug. 27 with a presentation at the Glen Cove Fire Department, before it was escorted roughly 12 miles south on Glen Cove Road, by veterans on motorcycles, to Eisenhower Park. “It felt so gratifying,” said Gary Glick, of North Merrick, the commander of Jewish War Veterans Post 652. “I never thought of something like this coming here. And even though I didn’t serve in Vietnam, now I know what it means to them to be honored like this.”

Tim Tetz, director of outreach for the memorial fund, said he was especially moved by the local veterans who escorted the wall replica in and out of Glen Cove. “These vets on the wall did not have their homecoming,” Tetz said, “and this is the homecoming parade they deserve.”

Louis Kaplan, a Vietnam veteran from Deer Park, had the chance to “honor some old friends” he served with, he said. He found their names, Robert Williamson and Stephen Lebitz, and made pencil rubbings of them, as visitors to the original wall have done since it was dedicated in 1982.

Volunteers dismantled the wall on Sunday, and its next stop was planned for Plymouth, Pa., as it continues its annual tour across the country, which it has been doing since 1996.