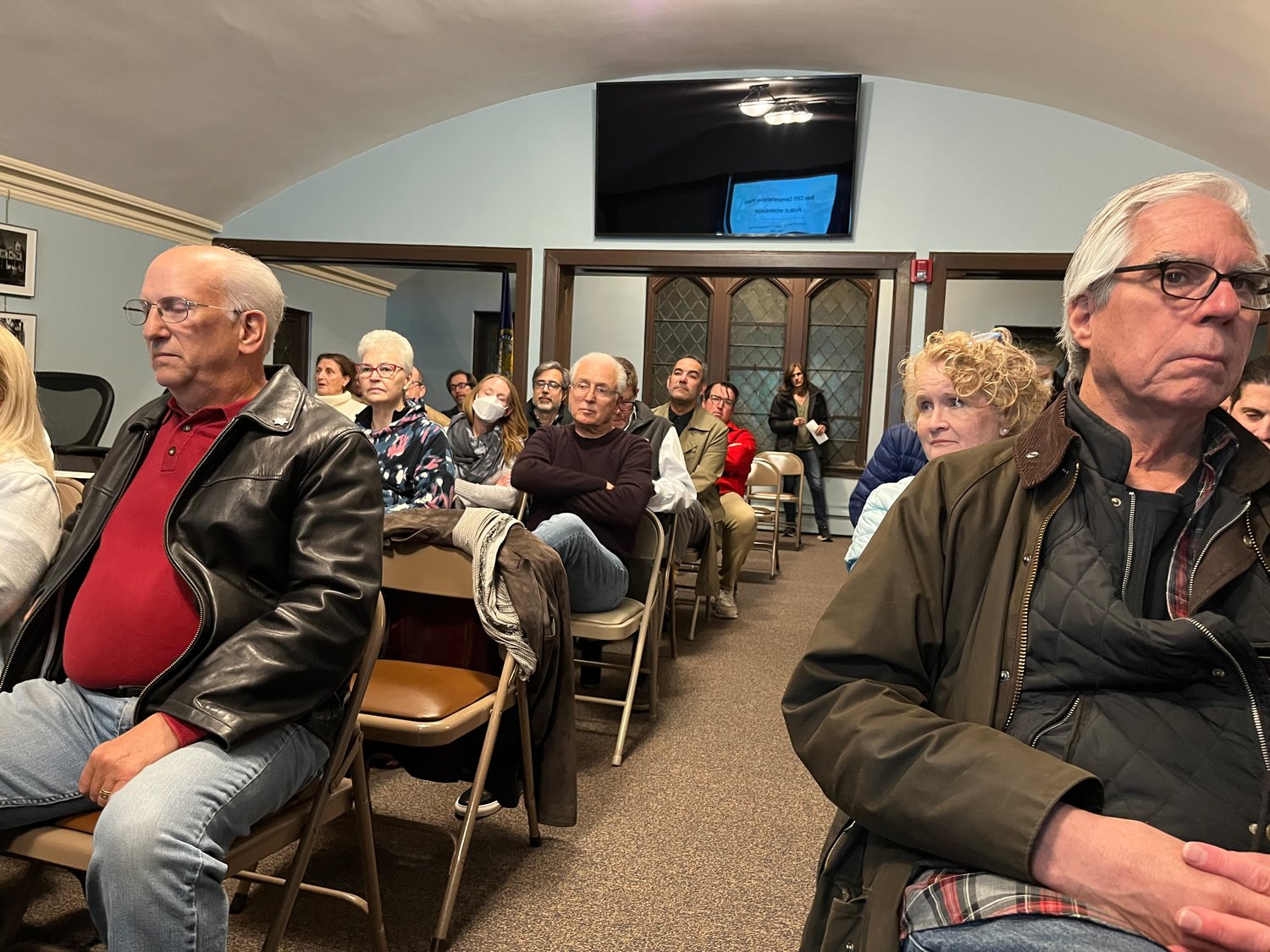 The room was filled with residents there to listen and share their thoughts at the village’s first public Comprehensive Plan meeting.
Will Sheeline/Herald

Failing to plan is planning to fail.”
Elena Villafane, mayor, Sea Cliff
By Will Sheeline

Roughly 50 residents of Sea Cliff gathered in the village board’s meeting room on Nov. 17 to hear and ask questions about the Comprehensive Plan. Representatives from BFJ Planning, the consulting firm hired to help craft the plan, public officials and members of the Long-Range Steering Committee discussed early plans to gather data and addressed questions and concerns posed by attendees.

Sea Cliff’s Comprehensive Plan, first initiated in 2019 with the creation of the Steering Committee, will be the first one developed by the village since 1970. Comprehensive, or long range, plans are often used by businesses, governments, nonprofits and other organizations to develop an outline to take short-term actions that achieve desired outcomes in the long-term.
Representatives from BFJ Planning led the meeting, beginning with a PowerPoint introduction of the company itself. BFJ is a consulting firm specializing in urban design, environmental analysis and other fields based in the city, which works with municipalities in New York, New Jersey and Connecticut.

The company is being paid a fee of $89,000 for one year of service while helping to develop the comprehensive plan.

Frank Fisch, one of the founding principals of BFJ and the head of their team working on Sea Cliff’s Comprehensive Plan, explained that the ultimate goal of the plan was to ensure the village would be prepared for any issues the future may pose, from environmental concerns to zoning issues to rising cost of living. He also emphasized that the plan should be a reflection of what residents want to see protected or changed in Sea Cliff.

“(Sea Cliff)’s not our hometown, it’s not our place and the plan should not be ours,” Fish said. “We really want public input, so that the plan produced represents your community and is not a plan that is going to end up on a shelf.”

Fish explained that BFJ has already begun some of the initial work, and cited two previous village surveys which had helped them craft the first few chapters of the plan’s draft. The first three chapters, which cover the history and regional context, demographics, and land use and zoning in Sea Cliff, are all available for public viewing at seacliffcomprehensiveplan.com.

After Fish and his fellow BFJ employees had explained the data and information they had already gathered, they opened up the floor to the assembled Sea Cliff residents to ask questions of both BFJ and members of the Steering Committee. Attendees asked a slew of questions, regarding everything from technical questions concerning the website to how the village plans to encourage young people to move there.

The conversation ended up spending a lot of time focusing on the zoning laws and potential issues regarding the North Shore Country Club, as some residents raised concerns that, if sold, the property could be broken up and sold en masse as hundreds of new properties. Fish and other BFJ representatives asserted that, through analysis organized by the comprehensive plan, the village could preemptively adjust the zoning laws as necessary.

One concern that was raised by an attending resident was whether the project was worth the cost. Anthony Losquadro, a 31-year resident of Sea Cliff, asserted that many other neighboring municipalities don’t have long-range plans, and claimed he didn’t necessarily see the need for one in Sea Cliff.

“You haven’t sold me on why this is all necessary,” Losquadro said. “All I hear about is this vision, and all of these high-sounding ideas, but it seems to me as a taxpayer that we’re spending money on a consultant who’s going to tell us how to spend more money.”

Several other attending residents spoke up in defense of the necessity of the comprehensive plan, including Sea Cliff mayor Elena Villafane. She argued that by looking to the future and anticipating problems before they happen the village will ultimately save money in the long-term.

“We as a village have an opportunity to look at this and craft a reasoned plan, because if we don’t have a good plan, we can’t change our zoning and we can’t effect good change,” Villafane explained. “Failing to plan is planning to fail.”