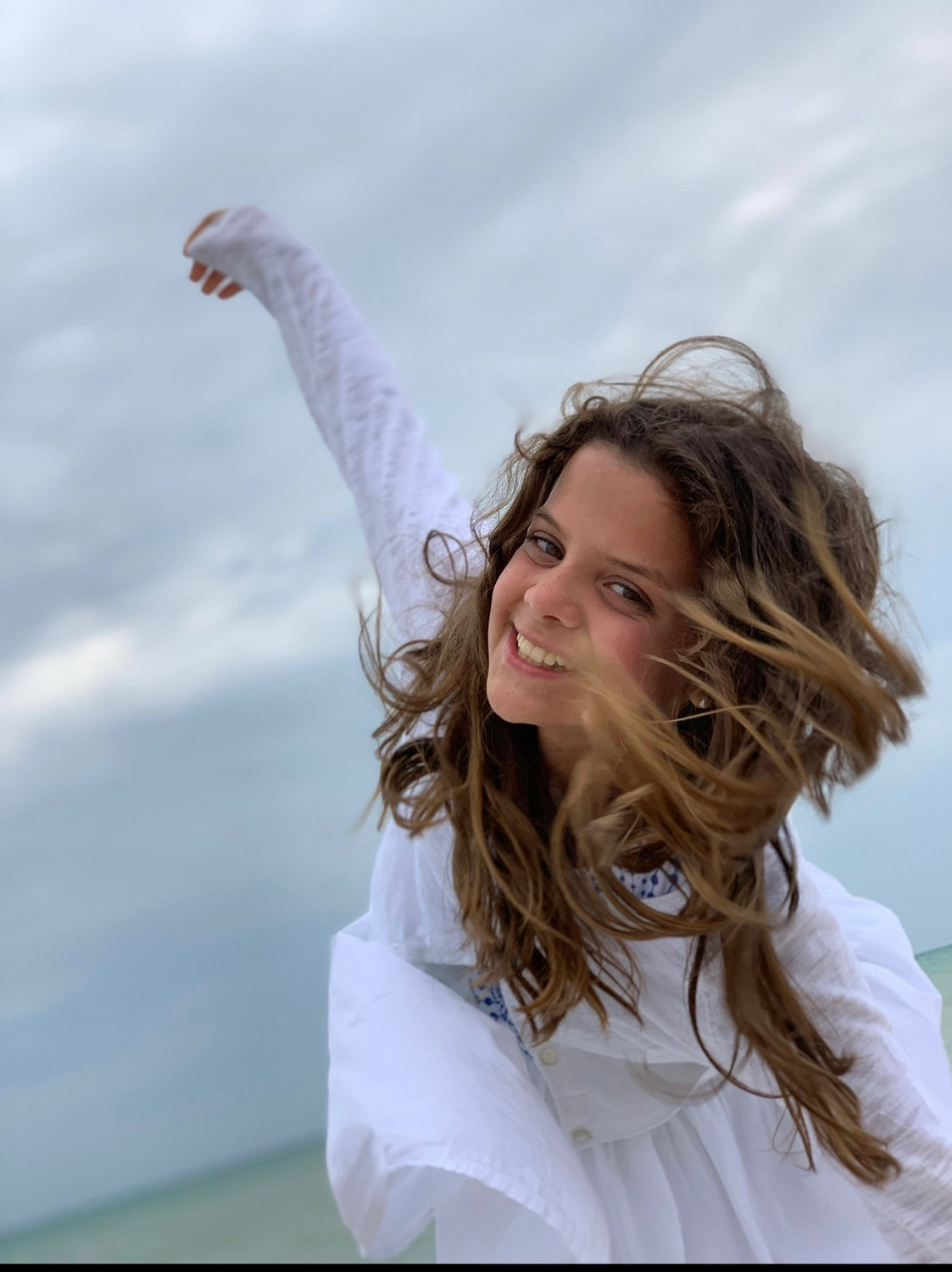 Penny Doerge, enjoyed a day at the beach in Boca Grande, Florida in 2021. She has been described as an angel and someone who only saw the positive.
Courtesy Doerge family 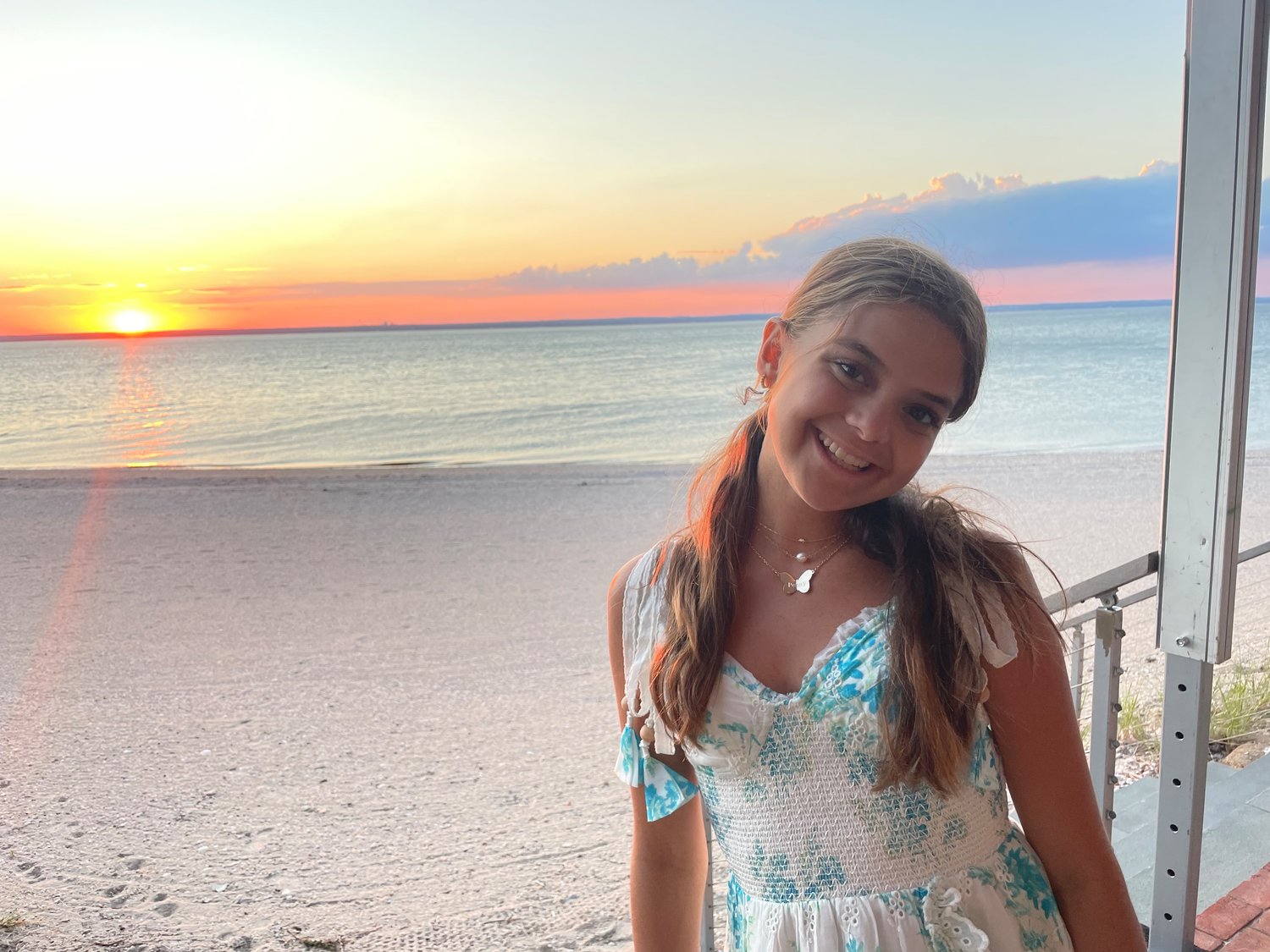 Penny Doerge, at Fox Point in Locust Valley in June 2022, lived her short life to the fullest.
Courtesy Doerge family 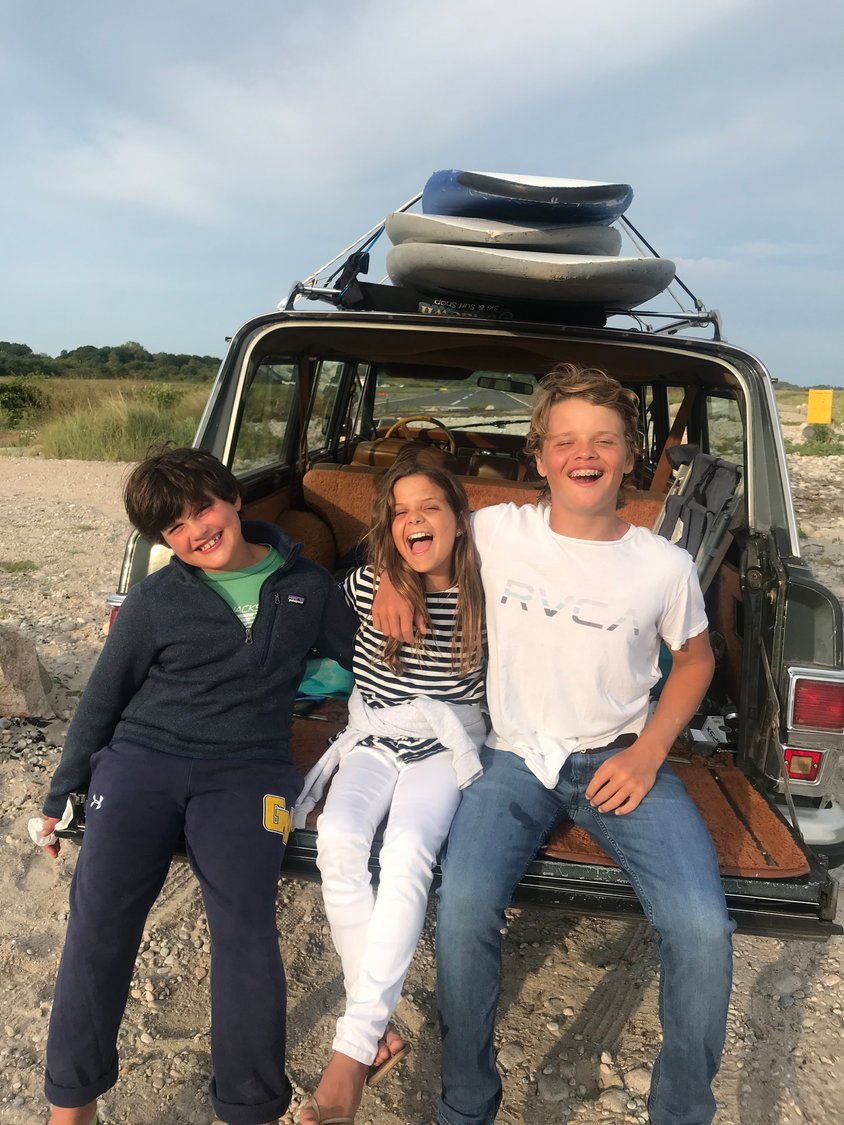 Penny, in 2019, with her brothers, Frankie, left and Henry, who she played pranks on.
Courtesy Doerge family
Previous Next
By Laura Lane

Last year, Penny Doerge saw an opportunity to do more. She created, what Courtney Callahan, called an art installation when she placed her plastic eggs and a stuffed bunny into the crevices of an unsightly 4-foot crumbling brick pillar.

“To Penny that brick was like a canvas,” explained Callahan, the director of children’s ministry and outreach at St. John’s. “The most amazing thing was Penny felt the cracks were full of beauty. The crumbling wall wasn’t like — this is how public housing is. Penny didn’t see it that way.”

A Glen Cove sixteen year old, described as a beauty both inside and out, Penny died on Nov. 10. The cause was brain cancer.

A few lines from a poem by Ariana Dancu were shared at the celebration of Penny’s life at St. John’s on Nov. 18, which roughly 1,000 people attended. Alix Smith, 16, said it personified her friend, Pen. It read: “She made broken look beautiful and strong look invincible. She walked with the universe on her shoulders and made it look like a pair of wings.”

“She was the cute one,” Alix said, “but that’s not what made her Pen. She was made up of much tougher stuff.”

Penny was diagnosed with nuerofibromatosis, or NF, at four months old after falling out of bed. Her fractured tibia wouldn’t heal, leading her parents, Chad and Kate, to take her to the Hospital for Special Surgery, where it was determined the fracture was a symptom of NF, a rare disease that presents differently in those afflicted. Penny’s primary symptom was pseudarthrosis — a bone disorder.

“Ever since Penny was a little girl, with her big bright eyes, kind smile and bouncing curls, we knew she was very special,” Kate said, at the memorial. “After Penny’s first surgery, she would commando crawl in her bright pink body cast across the room with a big smile and the determination of a little warrior that we would watch for so many years to come.”

Surgeons fused her tibia bone and put a rod alongside it, which made it possible for her to play sports. But Penny always wore the brace as a preventative measure, bedazzling it.

And although the possibility of other symptoms from NF loomed for her entire life, her medical issues never defined her, Chad said.

“From the early days, Kate and I never let this become a focus of who Penny was,” Chad explained. “At first this was our choice as parents but as Penny grew up, she took that attitude a step further.”

Penny was stoic when it came to her medical issues, which she rarely discussed. Chad said she never complained and was never sad or angry about what she had to endure.

“When it was time to go get a surgery or see doctors, she handled this with a clinical ‘get on with it attitude,’ like taking care of a business appointment before moving on to things she looked forward to doing,” Chad said.

Penny was always busy living life. She was a talented artist, fashionista, world traveler, and a social media influencer who loved TikTokking with friends, paddle boarding and dancing. She had an infectious giggle and loved playing pranks on her brothers, Frankie, 12 and Henry, 18.

When the coronavirus pandemic hit, Penny and her friends, Lilly Grant and Ellie Myles decided to open a camp. Glam Camp, a summer program for young girls, was a safe place for children during an unsafe time, Kate said, because it included the same group of children, whose parents were all friends.

The camp, which had themes, like movie star day and fashion runway day, rotated between the three girls houses where everyone was tested for Covid each day before enjoying the many activities that had been planned. Glam Camp was for girls from 5 to 8 years old the first two summers but then boys wanted to go too. So the third summer, the camp, renamed Adventure Camp, was for girls and boys.

Penny loved painting and her art was very important to her, Kate said. Her paintings were stunning, but creativity was also a part of who she was.

“She had an incredible eye for color and the way she dressed, she had her own creative style,” Kate said. “She was always doing her artwork, creating videos, TikTokks. Someone said Penny was an actress and the world was her stage. She was joy personified.”

Penny had an innate form of stoicism regarding her medical issues, which she rarely discussed. Chad said it made sense that many people, even those who were close to his daughter, didn’t have an understanding of what she faced.

The Reverend Mark Fitzhugh, rector at St. John’s, attributes Penny’s ability to experience life to its fullest to her parents.

“As a parent and person of faith what has been so inspirational to me is how Chad and Kate instilled in her a joy of life in the midst of struggle in her body,” Fitzhugh said. “Penny was and will continue to be a bright light for her friends and family.”

Penny attended the Green Vale School, in Glen Head, from pre-K until her graduation in 2020 and then enrolled at Portledge School in Locust Valley.

Dr. Jesse Dougherty, the head of school at Green Vale, said he would always remember Penny as someone who was unfailingly positive. When there was negativity around her she’d walk away, he said. And although academics wasn’t easy for her, Penny never gave up.

“She was a grinder and worked very hard,” he said. “Combining grit, hard work and happiness led to her success academically. It was the consensus of the entire school to give her the Buckley Award when she graduated.”

The Buckley Award for Effort and Achievement, one of the most prestigious awards awarded at Green Vale’s graduation, is given to a student or students who “show consistent effort and achievement in their studies.”

Dougherty said his memories of Penny would always be of someone who was friendly to everyone and had a magnetism about her. “Everyone wanted to be with her,” he said.
Chad’s parents, Carl and Meredith, of Locust Valley, have always been and remain impressed by their granddaughter’s tenacity.

“She was a little angel and she was full of beans,” Carl said. “She was fun and happy. Penny taught us — older and younger, a lot. When things aren’t right you say OK, let’s just take care of it.”

Carl can still remember when he went to an athletic event that Penny participated in. “She didn’t care if she could win or not,” he said. “She never said I can’t do it to anything. She was a gift from God. And she taught us how to treat other people.”

Penny was diagnosed with glioblastoma multiforme in 2020. An aggressive form of brain cancer, it is a symptom of nuerofibromatosis. Penny had the first of seven surgeries in early 2020 to remove the tumor on her brain. She also underwent chemotherapy and radiation. Her last surgery was in August 2022.

“We never stopped to think what if,” Kate said. “We lived life every day to the fullest and led a normal life.”

Penny trick or treated on Halloween but the next day she was exhausted. She was getting worse.

“When Penny returned from Memorial Sloan Kettering on Nov. 3 with the news from doctors that nothing more could be done, the community, friends and family stepped in. For eight days they stood by to help Penny and the entire Doerge family.

“We had this unbelievable support,” Chad said. “Everyone set up camp in our house like a love cocoon. There was so much love in this house and around Penny. People wanted to sing for her, play guitar, read to her and laugh with her.”

Penny never complained. “A doctor told me that in all of his career never had he seen a patient so brave and resilient in all of the treatments or someone who was doing so well turn so quickly,” Chad said.

Kate said she will always miss the joy that Penny brought to their entire household, her love of life and her infectious laughter.

The family asks that support be given to Hospital for Special Surgery-Lerner Children’s Pavilion at HSS.edu/pediatric-giving.asp or Advanced Neurofibromatosis Research-Children’s Tumor Foundation at www.ctf.org.