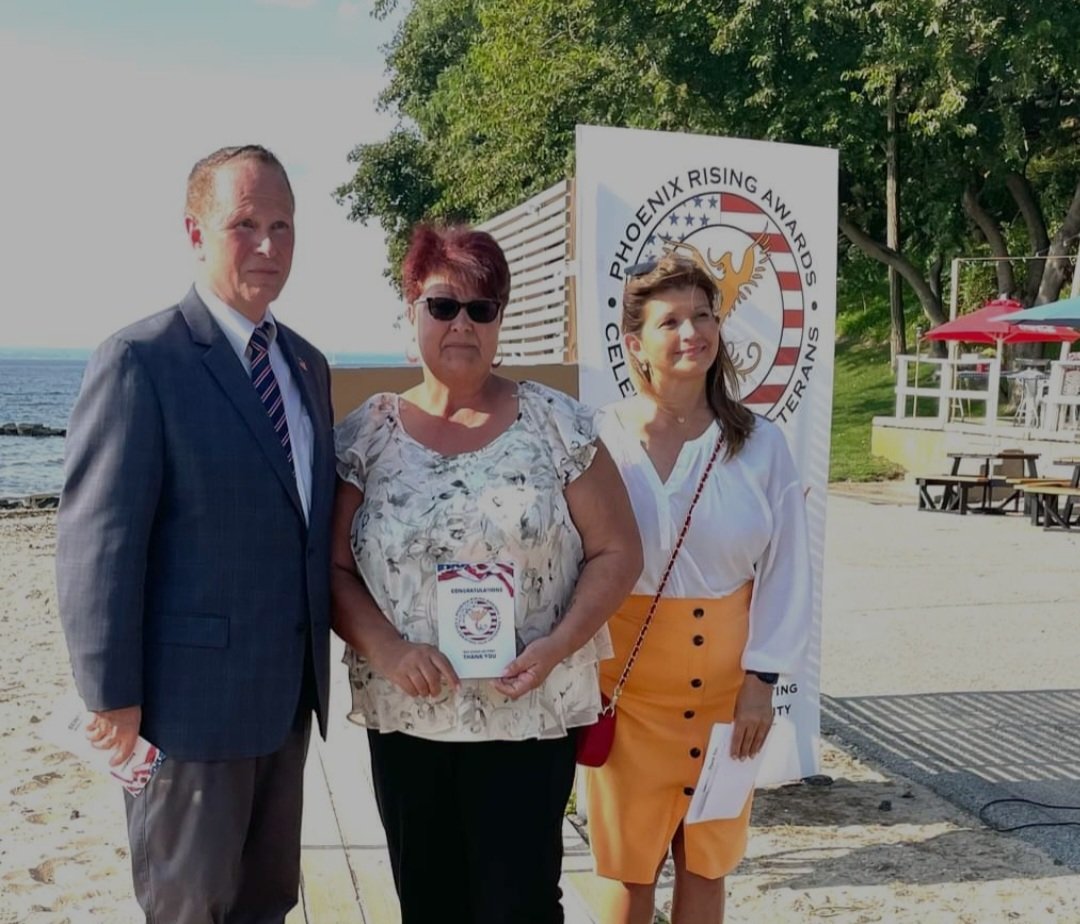 Gaitley Stevenson-Mathews and Connie Pinilla will present Virginia Cervasio, center, with the awareness and remembrance award, which she intends to accept in remembrance of her son and Locust Valley native, Angelo Cervasio.
Courtesy Raul Aguilar
By Roksana Amid

As part of their efforts, the Phoenix Rising Foundation recognizes veterans and outstanding community members for their service. Six of the 10 awards are specifically designated to be presented to veterans, with four of the awards for those who support veterans. The indivicuals that will receive the awards on Feb. 4, 2023 were announced at Morgan Park on Sept. 18.

The award categories relate to legacy, leadership, community service, volunteer, home front, impact, unity, front runner, honor, and the awareness and remembrance award. The last three awards noted are new categories. The front-runner award pays tribute to an individual or organization that has been a front runner who makes significant efforts in raising funds for veteran causes. The honoring award is for an individual who has focused his or her talents on working to honor veterans. The awareness and remembrance award pays tribute to individuals who have worked to heighten awareness on the rate of suicide among active service members.

The recipient of this year’s awareness and remembrance award will be presented to Virginia Cervasio. She intendes to accept the award in remembrance of her son and Locust Valley native, Angelo Cervasio.

Angelo was deployed to Operation Southern Watch, which was an air-centric military operation conducted by the United States Department of Defense that monitored and controlled airspace south of the 32nd Parallel in Iraq during the summer of 1992 until the spring of 2003. The then 24-year-old suffered from post-traumatic stress disorder and committed suicide Jan. 17, 2006.

Virginia started the nonprofit organization Heroes Among Us, which aims to better the lives of veterans after her son’s death. She is a supporter and sponsor of the VFW, and frequently donates with funds raised through Heroes Among Us.

Virginia worried that there were not any organizations specifically geared toward veteran well-being, so she established her own organization, realizing there weren’t enough resources to help veterans who return home after service.

“It’s very important that the community comes together and that we support our veterans because otherwise the alternative is that they may end up like my son,” she said.

The recipient of this year’s Homefront Award will be presented to Pete Prudente. A local Union 15 operating engineer, he is known around the city as a man who gives his all for others. Prudente said he often wonders why people don’t help one another and live together happily.

“So many people are so fractured lately in the world,” he said. “Nobody's getting along.”

Prudente is being the change he wants to see in his community, and often extends his services when he sees the need.

Prudente has become the face of altruism in Glen Cove, an identity that was cemented when he donated a kidney to a stranger in March 2019. At the time, he was only one of 150 living altruistic donors in the entire State of New York.

The James E. Donohue Veterans of Foreign Wars Post 347 headquarters in Glen Cove has been closed since August 2021, when a fire destroyed the second floor of the century-old building on Hill Street. One year later, the veterans are still without a place to officially call home. The cost of repairs has been estimated at $400,000, but their insurance policy is offering only $140,000.

The Phoenix Rising Committee, renamed Phoenix Rising Foundation, was created to help the VFW holding their first fundraiser on Feb. 19, which raised over $20,000. While the foundation is committed to supporting veterans and works with the leadership of VFW Post 347, the group is a standalone, and not a direct a part of the post.

The idea for the committee stemmed from Gaitley Stevenson-Mathews and Jeanine DiMenna, who wanted to take their birthday celebration and repurpose it to raise funds for the VFW. Both decided to take the opportunity to pay tribute to veterans across the north shore community and simultaneously support veteran causes.

The concept-name for Phoenix Rising Foundation was inspired by Greek mythology. A discussion within the 10-member executive committee concluded that the name was the best fit given the circumstance of the VFW fire.

“I think of it more literally at this stage of the game,” said Stevenson-Mathews. “It's the VFW Post rising from the ashes.”