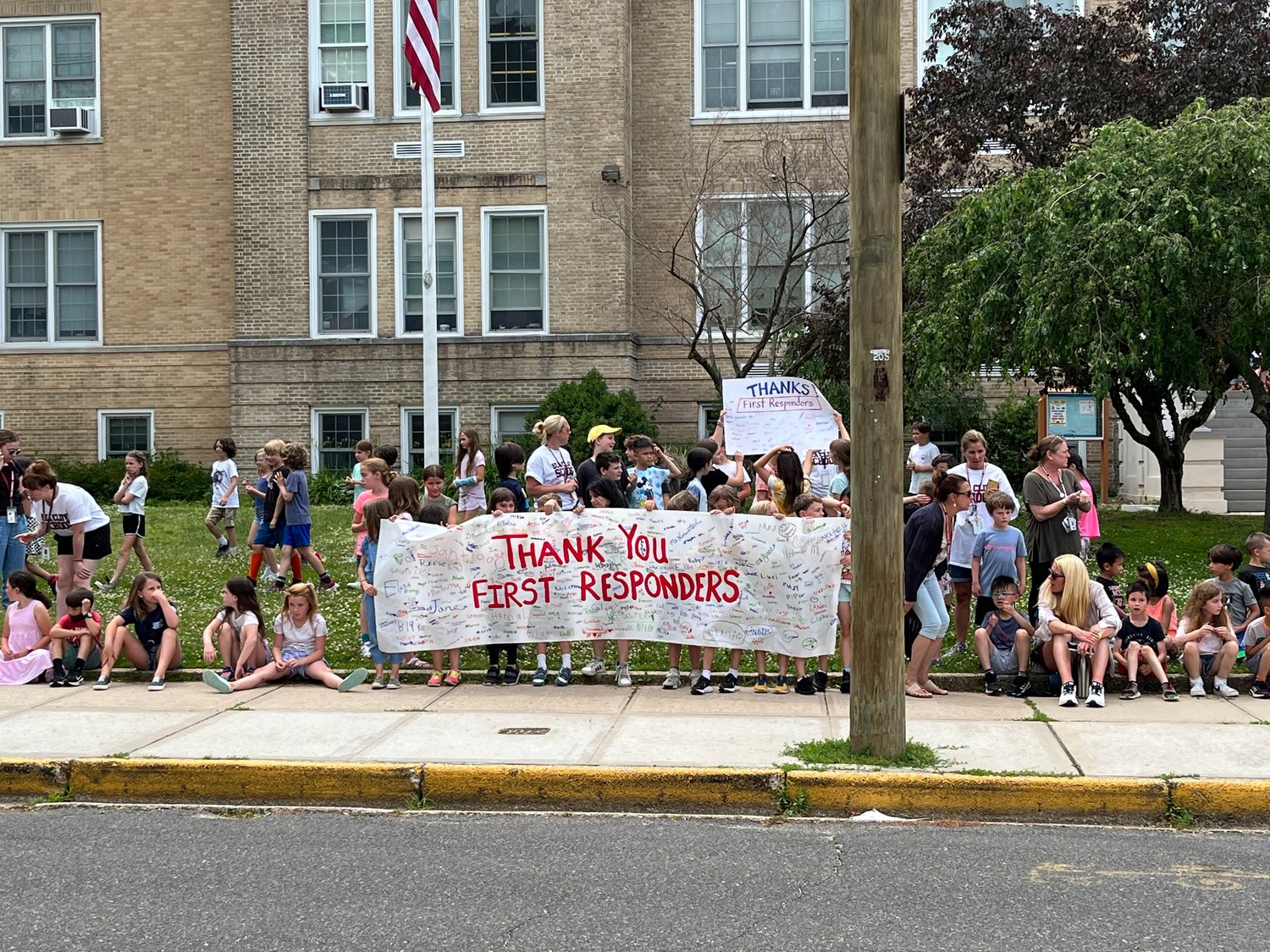 Everyone at Sea Cliff Elementary School pitched in to make and sign a banner thanking the volunteers of the Fire Department, which will be hung up in the firehouse.
Will Sheeline/Herald

An event like this is important on so many levels, it really brings the community together.”
Jeanette Wojcik, Sea Cliff Elementary School Principal
By Will Sheeline

The students at Sea Cliff Elementary School met hometown heroes Monday, when volunteers from the Sea Cliff Fire Department came by to help the children celebrate First Responder Day, answering their questions and explaining the importance of hard work, dedication and giving back to the community.
Courtney Citko, who has two children at the school, helped organize the event because she felt it was important for the students to be able to thank first responders, especially in the wake of the coronavirus pandemic.
“It just really seemed like they . . . are unsung heroes in a lot of ways,” Citko said. “We figured this would be a great way to help the kids to understand that there are people out there who help them and help their families.”
Students lined Carpenter Avenue, outside the school, at 1:45 p.m. in anticipation of the firefighters’ imminent arrival. The classes all made thank-you letters for the firefighters to take back to the firehouse, in addition to a large banner, signed by all of the students.
Jeanne-Marie O’Donnell, a teaching assistant, was the school’s primary liaison for the event, and was instrumental in organizing the banner-making. O’Donnell’s husband, Sean, is an ex-chief and current Sea Cliff firefighter. Their son Brian is the second assistant chief, and their other son, Jack, is a lieutenant in the department’s Hook and Ladder Company.


The school’s principal, Jeannette Wojcik, said the students wanted to show the firefighters how much they appreciated their help and presence in the community. She also mentioned that it was important for the students to be able to recognize the people who do the hard work of protecting the community by meeting and acknowledging them face to face.
“An event like this is important on so many levels, it really brings the community together,” Wojcik said. “Sea Cliff is a small community, and we have each other to rely on, so knowing that our community helpers, like firefighters and ambulance drivers, are the people who live in our community, is an important thing to know.”
When the ambulance and fire truck arrived, they were met with a standing ovation and delighted cheers from the crowds of students and faculty. Although initially two fire trucks had been scheduled to appear, a house fire in Glenwood Landing called the other truck to action, proving that the work of first responders never stops.
Three first responders arrived to speak with the students: Sal Spina and Andrew Janusas, a lieutenant and member in the Sea Cliff Fire Department’s Hose Company, respectively, and Jesse Lebus, a member of the Engine Company. The three firefighters spread out among the hundreds of students, answering questions, telling anecdotes and giving high-fives to the smiling children.
Spina explained to the students that he had recently finished studying to be an emergency medical transport vehicle operator. He showed them the inside of his ambulance, although some students were initially hesitant, worried that once inside they would have to go to the hospital. Janusas also showed a growing line of students the inside of the fire truck, giving them an opportunity to play with the fire hose and even climb in the truck.
Lebus, the pastor and rector at St. Luke’s Episcopal Church in Sea Cliff, and one of the firehouse’s chaplains, asked the children questions about what they thought it meant to be a volunteer, and what the most important part of the job was. The children responded with a chorus of “Volunteers help people” and “Helping other people,” which he explained was at the core of being a first responder.
“You all have the right idea, the key to being a volunteer is that you want to help. Volunteers help without any expectation of return,” Lebus said. “They don’t help for money, they don’t help for glory, they don’t help for pride or for any of that sort of stuff. They help because they want to.”
Report an inappropriate comment