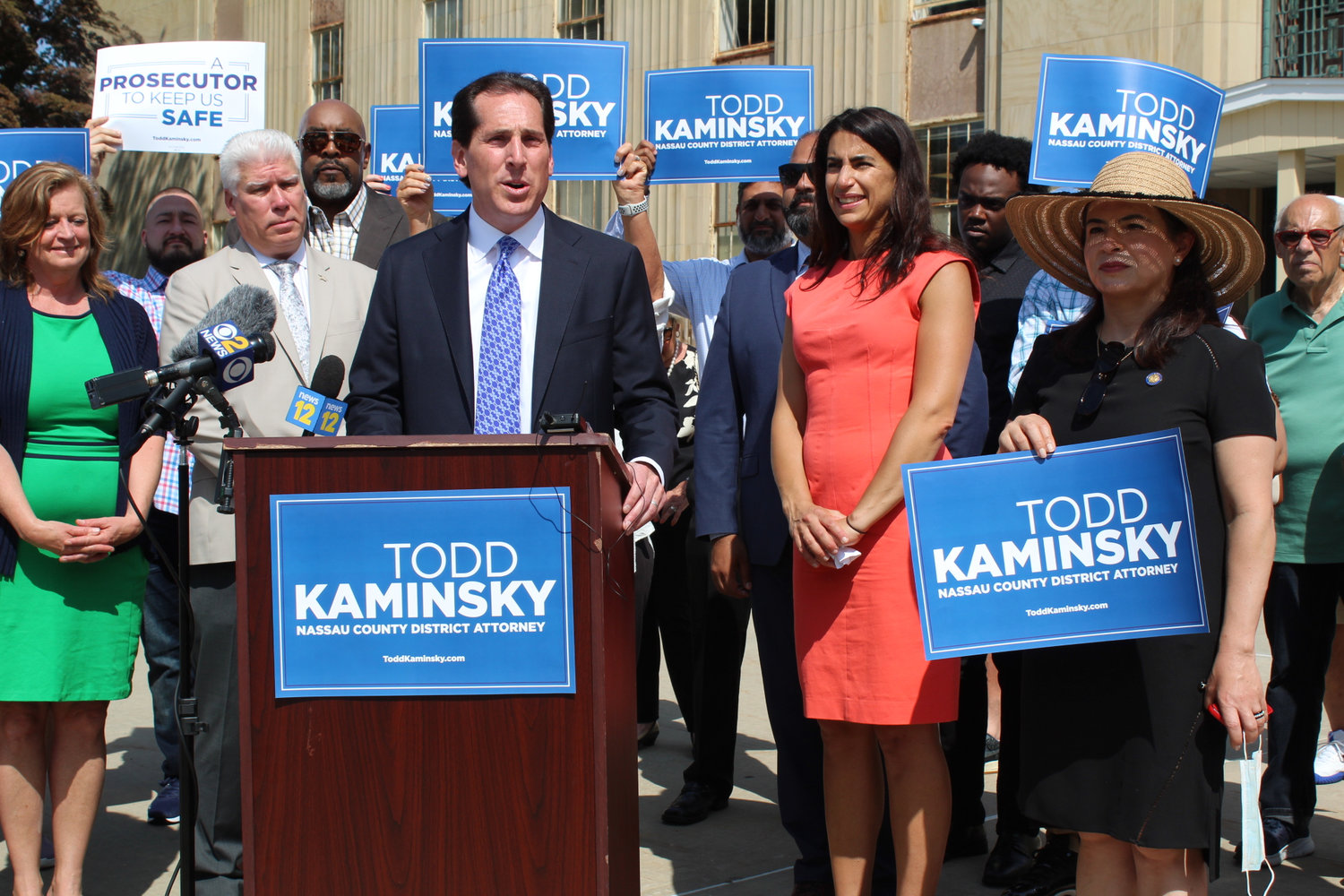 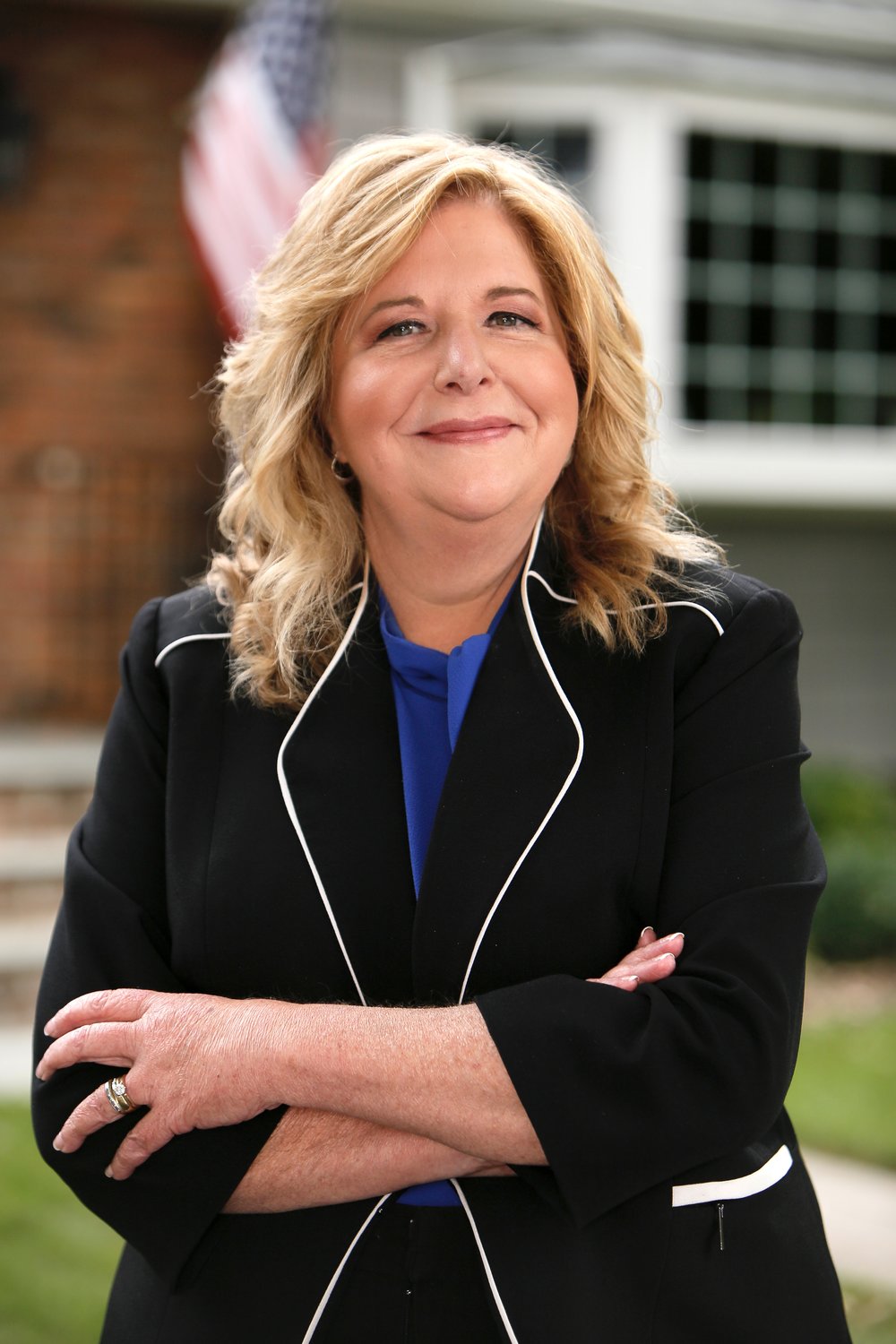 The race for Nassau district attorney has quickly become one of the most hotly contested in the county, with Democratic State Sen. Todd Kaminsky, of Long Beach, and Republican Anne Donnelly, of Garden City, trading blistering verbal barbs in a series of TV commercials.

The spots, running on CNN and other cable networks, began three weeks ago, when Donnelly, a 30-year career prosecutor in the Nassau district attorney’s office, aired one featuring a Syracuse woman, identified in the commercial as Jennifer P. The woman, Jennifer Payne, said her daughter’s killer was released without bail because of the state’s bail-reform law, which Kaminsky voted for in the Senate.

The State Legislature first passed the bail-reform measure in 2019, restricting the use of cash bail and pretrial detention in misdemeanor and nonviolent felony cases. It did, though, give judges discretion to assign bail in almost all violent felony cases and certain nonviolent cases, such as witness tampering, according to the Brennan Center for Justice.

In Donnelly’s commercial, Payne holds a framed photograph of her daughter, Sarah Tombs, who was 22 at the time that she died.

The man who allegedly shot her, Darien Shellman, then 24, a mall security guard who was a Navy veteran with no prior criminal record, was charged with second-degree (unintentional) manslaughter after, he claimed, his gun went off when Tombs, his girlfriend at the time, grabbed the weapon and a bullet struck her in the head, killing her, according to Syracuse.com.

Under the original bail-reform law, unintentional manslaughter was among the alleged crimes for which defendants were automatically released. The Legislature amended the law in April 2020, a little more than three months after the measure took effect, to include a greater number of crimes for which bail could be assigned, including any alleged crimes in which someone had been killed, according to the Brennan Center.

Although bail could have been reassigned in this case, it never was, and Shellman recently accepted a plea agreement for which he will serve no prison time, according to Syracuse.com. Kaminsky noted that the district attorney who offered the plea deal is a Republican.

Kaminsky has repeatedly said he voted for the bail-reform bill, but was not a prime sponsor, and he did not write it, as Republicans, including Donnelly, have incorrectly claimed. He also emphasized that he voted for the amended law giving judges back the discretion to assign bail in crimes such as second-degree manslaughter.

At one point in the 2010 case against Susan Williams, a Garden City mother, a mistrial was declared after a taped phone conversation between Williams and her daughter was erroneously played for a jury. In the commercial, Kaminsky blamed Donnelly for the error, and said she had changed an agreement sent to the judge.

Williams was ultimately found guilty in the case, but Kaminsky stressed that there “was a mistrial. That’s a serious thing.”

Asked for a response, Donnelly wrote in an email, “It is no surprise that [Kaminsky] would lie about my unblemished record as a prosecutor. It is sad that Senator Kaminsky is embarrassing himself this way, and the voters always see through a politician’s lies.”

So far in the campaign, Kaminsky has emphasized his law-enforcement background. In 2008, he joined the U.S. attorney’s office for the Eastern District of New York, in Brooklyn, and worked for six years as an assistant U.S. attorney. There he became acting deputy chief of the Public Integrity Section. He had been an assistant district attorney in the Queens County D.A.’s office, prosecuting domestic violence cases, robberies, shootings and other violent crimes.

Donnelly resigned from the Nassau County district attorney’s office to run for the top job, as she was required to do, but she has emphasized her extensive law-enforcement background. She was most recently deputy chief of the office’s Organized Crime and Rackets Bureau. She was also liaison to the Nassau County Correctional Facility. She formerly oversaw public corruption trials as acting chief of the public corruption bureau, once served as the deputy chief of the economic crimes bureau and was a senior trial assistant in the rackets bureau, as well as a felony-screening supervisor.

In the most recent financial filing, Kaminsky said he had raised $1.7 million for his campaign. A spokesman for Donnelly said she had raised more than $386,000.

Both Kaminsky and Donnelly said they planned to run more TV commercials in the coming weeks.