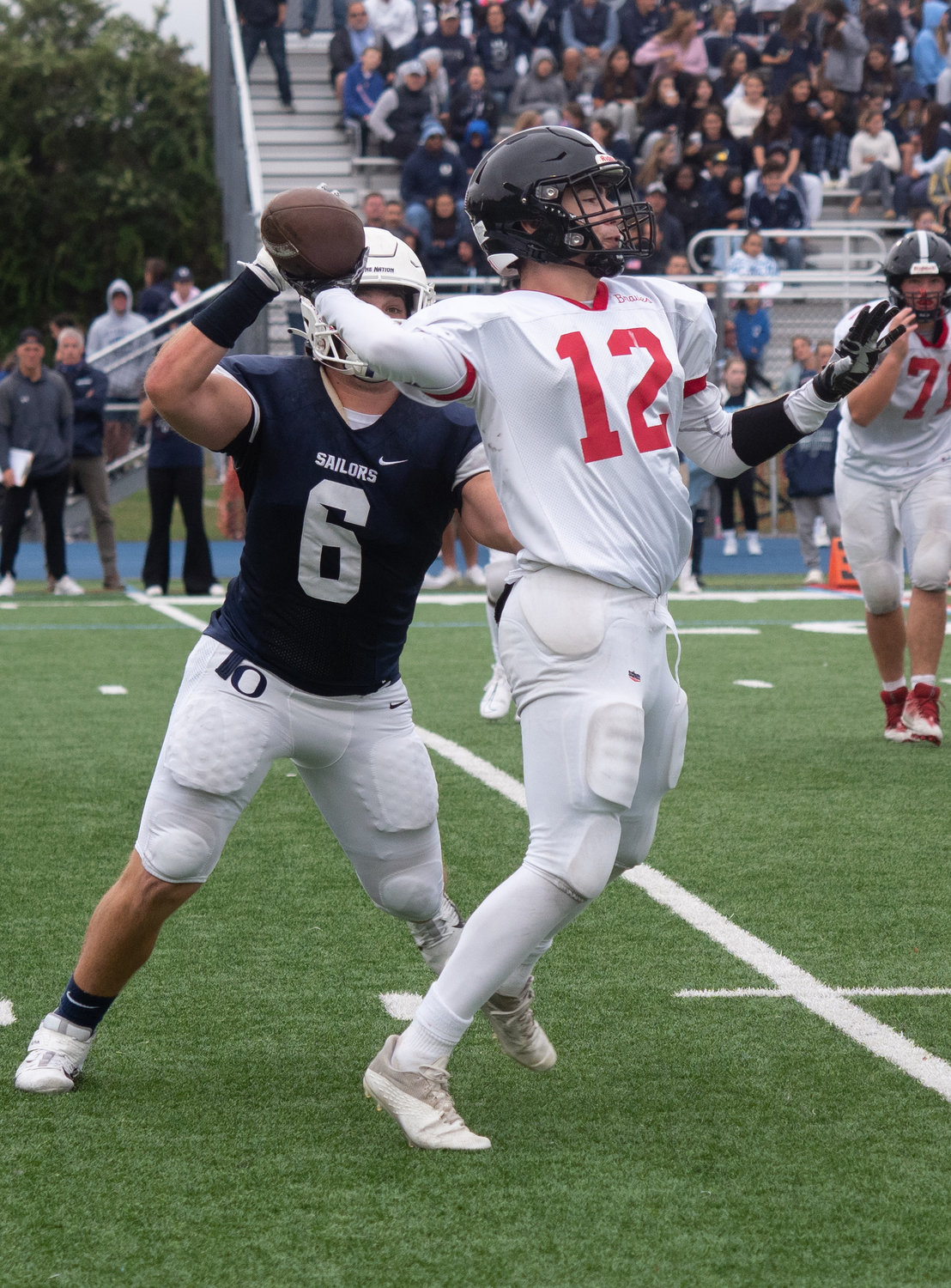 The Oceanside football team has encountered some pretty rude guests so far this season.

Under gloomy weather conditions, the Sailors were shut out for the second time in three home games and dropped to 0-3 on their own turf after a 28-0 loss to Syosset on Homecoming Day last Saturday. Oceanside trailed by just a 7-0 score at halftime, but the Braves put the game away with a 14-point third quarter.

The Sailors were hoping the momentum of their 43-7 laugher at Plainview Old-Bethpage the previous week would carry over into their celebratory weekend, but instead the team failed to score in the first quarter for the third time this season before eventually falling to 1-3 at the midway point of the campaign.

Head coach Rob Blount credited the defense for keeping Oceanside in the game as long as they could, with Mike McGann and Logan Lyson leading the way with five tackles apiece and Cole Parker chipping in four.

“I thought we played pretty good defensively,” he said. “It was 7-0 going into half and then we ended up making a couple of mistakes in the second half that ballooned the score to 28-0. We’re young and we’ve got a lot of guys in new positions and I think one of the common threads that we have so far [is that] we end up self-destructing, which happens with young teams.”

Oceanside had just four possessions in the first half. The first was a three-and-out and a penalty helped stall the next one after six plays despite the Sailors moving into Braves territory. The third drive also ended in six plays and a missed field goal ended a scoring threat just before intermission.

“Our problem right now is, on the offensive side of the ball, we put together three or four or five good plays and then we commit mistakes on our own,” Blount said.

Will Cawley’s two-yard touchdown run put Syosset (2-2) on the board with about eight minutes left in the second quarter. The Braves further deflated the home crown in the third on Kevin Hargrave’s 30-yard interception return for a touchdown and Mustafa Mozawalla’s 81-yard strike to Nicholas Padula. Mozawalla later tossed a 29-yard touchdown pass to Carter Mandel in the fourth.

Junior Nicky Cairo had 14 carries for 73 yards on the day after exploding for 112 yards on 15 carries with three touchdowns against Plainview. Parker had similar success with 12 carries for 70 yards and freshman quarterback Shane Harmon completed half of his 10 passes for 40 yards.

The Sailors next visit undefeated Massapequa – the team that beat them in each of the last two county title games – before concluding the regular season against struggling Hicksville (0-4), Valley Stream Central (1-3) and Freeport (1-3).

“We just have to execute, whether it’s just finishing our blocks, getting our stops on defense or running the right routes,” Blout said. “The stuff is there. We’ve just got to continue to get better and, as coaches, do an even better job of putting them in successful situations.”