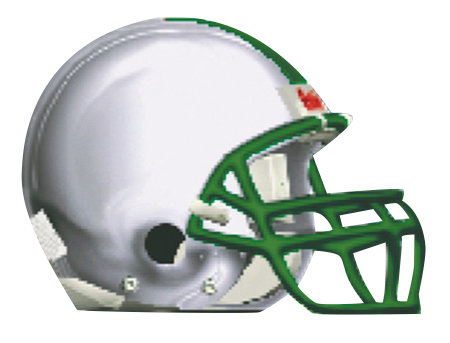 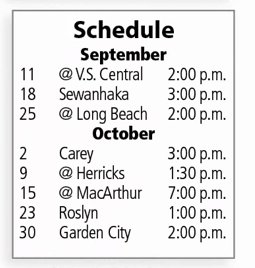 Elmont was relegated to the role of spoiler late last season and played hard until the final whistle, finishing with a 3-3 record thanks to an upset over playoff-hopeful Valley Stream Central in the Conference II finale.

The Spartans, who fell one win short of the playoffs and suffered a pair of one-score defeats, will need to overcome inexperience at many positions to get back to the postseason. Head coach Jay Hegi said he has no idea what to expect from a roster with only eight varsity returnees.

“We’re pretty young and facing a very competitive schedule,” Hegi said. “We have a deep group of receivers and a solid running game if our best guy stays healthy, but we also have a bunch of new linemen. Hopefully we find a way to be consistent enough to make the playoffs.”

Seeded sixth in the 14-team conference, Elmont returns to Valley Stream Central to kick off the season against the Eagles, whom they beat 22-20 on April 17 thanks to three touchdowns from then-junior Evan Colwell.

Colwell, the Spartans’ most talented receiver, showed the ability to play quarterback in the finale and could fill a need there. “We’ll be innovative with him,” Hegi said. “He’s a tremendous athlete who’s going to play outside linebacker or corner on defense. He’s not going to come off the field.”

The plan is for junior Reyvaun Powell to take over the offensive keys at quarterback. He saw action in a handful of games at the JV level last season and has a lot to learn. “He’s a dual threat and fast, but he needs work,” Hegi said. “He showed some signs in 7-on-7s during the summer.”

In the backfield, the status of senior Tyler Myers will be an important factor. He’s been banged up two seasons in a row. “If he stays healthy, he’ll be one of the top five backs in the conference,” Hegi said of Myers, who can also handle punting and kicking duties. “He’s the type of runner who can barrel through defenders.” Senior Kymani McDonald might be a bit undersized but makes up for it with talent and toughness. He’s in line for some carries and brings a wrestler’s mentality and toughness to the huddle.

The offensive line features a pair of strong two-way starters, Hegi said. Senior Thomas Renauld and junior Precious Ekeh do a lot of the dirty work in the trenches and will play tackle and guard, respectively, on the same side. Both are also run-stuffing defensive tackles. The Spartans could get a major boost from senior Kavan Henry, who missed last season but would be another two-way starter on the line. One project is junior Sabyan Schmitz, who is a candidate for center but has no experience there.

Elmont’s defense, which didn’t allow more than 28 points in any game and held three opponents to fewer than 10 points, has no shortage of options in the secondary with many of the wideouts possessing the ability to shutdown their counterparts. Senior Zachary Walton can be tough in man-to-man. Myers, McDonald and Young spearhead the linebacker corps.