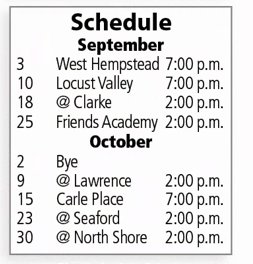 Malverne boasted one of the youngest rosters in Nassau Conference IV last season and will be bolstered by some members of an undefeated JV squad, bringing an excitement level not felt in the program for quite some time.

The Mules suffered some growing pains with three single-digit defeats leading to a 1-5 finish and must replace three high-end two-way starters as well as three role players. Seeded No. 7 in the 13-team conference, they open at home under the Friday night lights against West Hempstead.

“We have a bunch of guys with three or two years of varsity experience and have a lot to be excited about,” head coach Kito Lockwood said. “We lost some tough games in the fourth quarter but it wasn’t for a lack of effort. We have a tough schedule and come Weeks 7 and 8, we’ll find out if we’re a playoff team or not when we face the top two seeds.”

The offense is in the hands of sophomore quarterback Chad Wesley, who Lockwood said showed signs of greatness at the JV level before a late-season call-up to the big stage. “He has nice size (5-foot-10) for a sophomore and is still growing,” Lockwood said. “He’s played quarterback, receiver and running back growing up. He’s a dual threat and a perfect fit for our system.”

The face of the unit is senior running back D’Andre Blagrove, a 6-4, 240-pound workhorse with a combination of power and speed. He rushed for nearly 500 yards and four touchdowns while also serving as a defensive leader. “He’s not really going to come off the field,” Lockwood said.

Blagrove’s backfield and linebacker mate is junior Norman Brown, who doesn’t possess the same kind of size but is extremely talented, Lockwood said. “We used Norman a lot on defense and he’s going to be a little more involved in the offense,” he said. “He can be a bowling ball. I’m expecting big things.”

At receiver, the Mules saw Armando White go down in last season’s finale and it’s unknown if he’ll be ready for the start of his junior campaign. White had two touchdown receptions in his first game as a sophomore. If healthy, he’ll form a solid duo with junior Dustin McPherson, who earned All-County honors in spring track and showed a reliable set of hands in the air attack. He’s 6-3 and plays strong safety. White is a cornerback.

A trio of seniors — Ryan Thompson, Justin Murphy and Jeffrey Enwere spearhead the offensive front. Thompson returns as the starting center and handles the shotgun responsibilities well, Lockwood said. Murphy is a third-year starting guard, while Enwere moves into a starting job after filling a reserve role for a few years.

Another weapon on offense, something Malverne had been missing since Lockwood’s playing days in the 1990s, is kicker Javier Fuentes. As a freshman, Fuentes was successful on 85 percent of his extra-point tries and went 1-for-2 on field goals. “He’s legit,” Lockwood said. “Not a lot of teams have a strong kicking game and it could be the difference in close games. He also kicks off and punts.”

Malverne’s strength on defense is its linebacker corps, led by sophomore Hugh Wilkerson III, who has Blagrove and Brown as running mates. Wilkerson III led the team in tackles and posted double figures in stops in four of six games. “Hugh is a ball-hawk who gets to the ball with attitude,” said Lockwood, who also likes a secondary that includes junior shutdown corner Sylivan Castin and sophomore safety William Hartley. The latter could enter the mix at wideout and also serve as the holder on kicks.