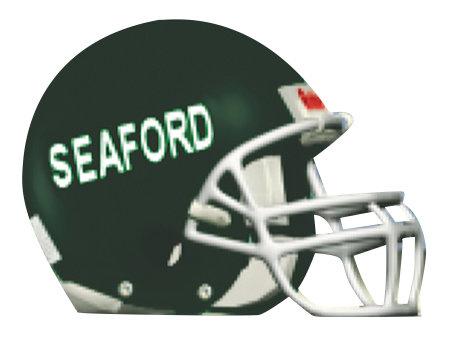 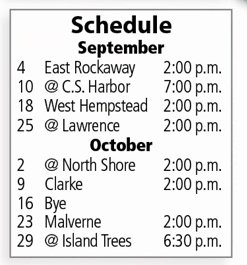 For the first time in more than two decades Seaford football will have a new face leading the program.

Rob Perpall retired in the offseason after guiding the program to eight county titles and two Long Island crowns in his 21 seasons roaming the sidelines. Mike Corcoran, who was on the coaching staff for Seaford’s run of four straight county titles from 2007 to 2010 as defensive coordinator, now takes over after eight years away and will try to continue the winning tradition established by his predecessor.

“It’s nice to be back,” said Corcoran, who returns to Seaford after serving as head coach at Roslyn from 2013 to 2016 along with assistant coaching gigs at Bethpage and East Meadow. “It’s a really good program and I’m happy to be the one to get to take it over.”

Corcoran, a longtime Seaford teacher and former boys varsity lacrosse coach, inherits a team that went 5-0 in a shortened regular season held in the spring due to the Covid-19 pandemic before falling to Wantagh in the Conference IV semifinals.

Joining Corcoran this fall as offensive coordinator is Long Island high school football coaching veteran Lou Buschi, who he worked with at Roslyn. Bushi’s offense will be led largely by senior running back James McHugh, who earned All-County honors as a junior with more than 900 yards rushing in just six games.

“He will definitely be one of our keys on offense,” said Corcoran of McHugh, who rushed for 163 yards in just 16 carries in Seaford’s season-opening 28-0 win against Lawrence and 165 yards with three touchdowns in a 32-6 victory versus Wantagh to close the regular season.

Thomas Kofod also adds experience to the backfield after some explosive performances last year that included rushing for 78 yards on just five carries in a 28-14 win at Clarke on April 10.

While Corcoran wants to continue Seaford’s recent history of run game success, he also is hoping to open up the passing game with returning senior quarterback Kyle Stark, who tossed some clutch touchdown passes in the spring. One of his main targets will be senior tight end Jack Murphy, a three-year varsity starter.

“We’d like to add a little more passing to the offense but we will try and push the run as much as we can,” Corcoran said.

Seaford graduated the bulk of last year’s offensive line, which was an integral part of driving the Vikings’ ground game success. Seniors Jake Kellner and AJ Arguello bring veteran leadership to the unit as returning starters and Corcoran will use preseason practices to determine who to fill the other spots.

Kellner, Arguello and Murphy are also key facets on the other side of the football as returning starters on the defensive line. The Vikings also bring back Kofod and McHugh at linebacker along with AJ Barone at free safety.

Seaford is seeded second in Conference IV behind only last year’s runner-up North Shore with Clarke right behind them at third. Defending champion Wantagh has moved back to Conference III after just one season in Seaford’s league due to increased enrollment.

After kicking off the season Labor Day weekend against East Rockaway, Seaford travels to Cold Spring Harbor for a Friday night game on Sept. 10. The Vikings visit North Shore on Oct. 2 before hosting Clarke Oct. 9 and then will have a late-season bye the following weekend. The regular season concludes on Oct. 23 at home against Malverne and at Island Trees on Oct. 29.