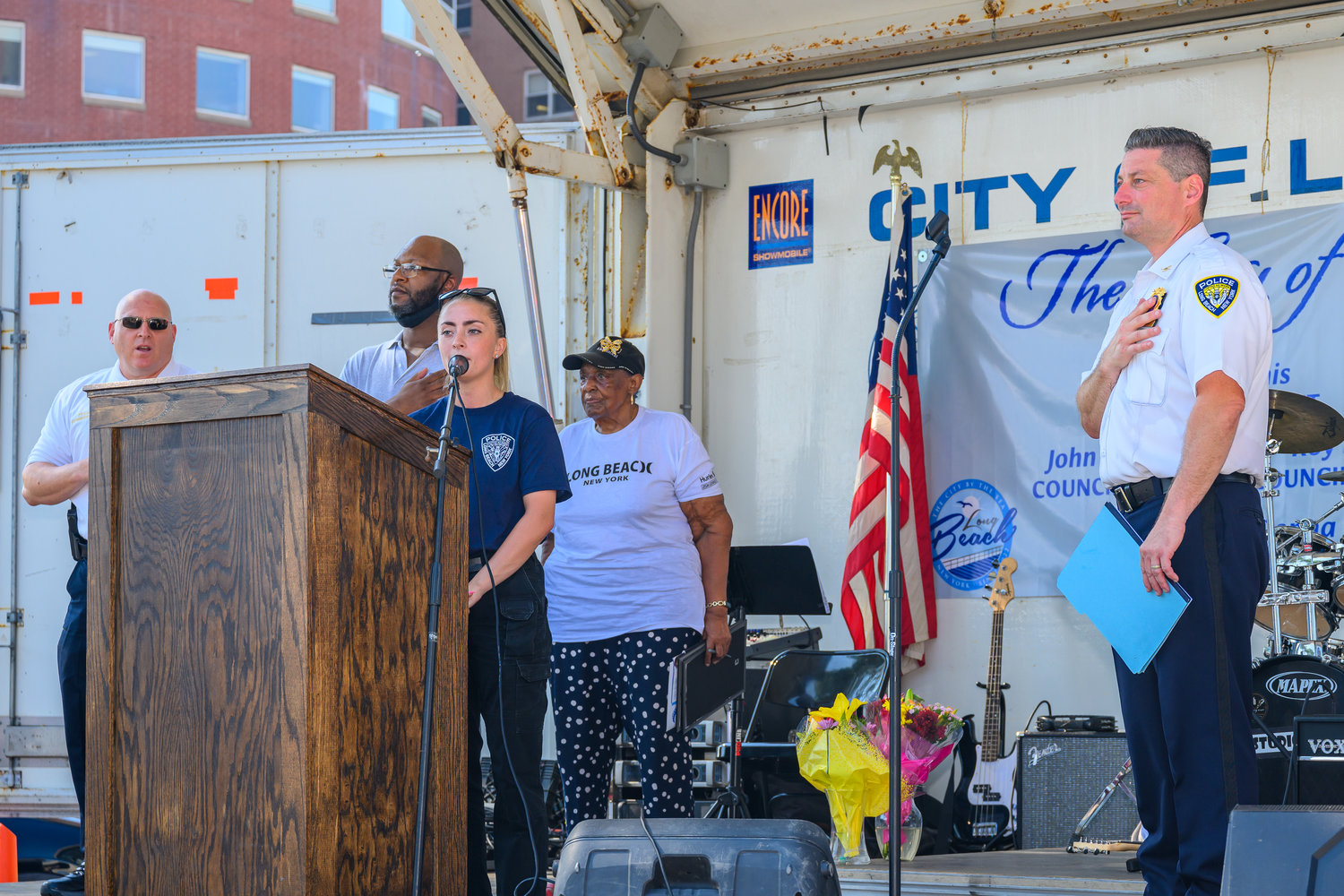 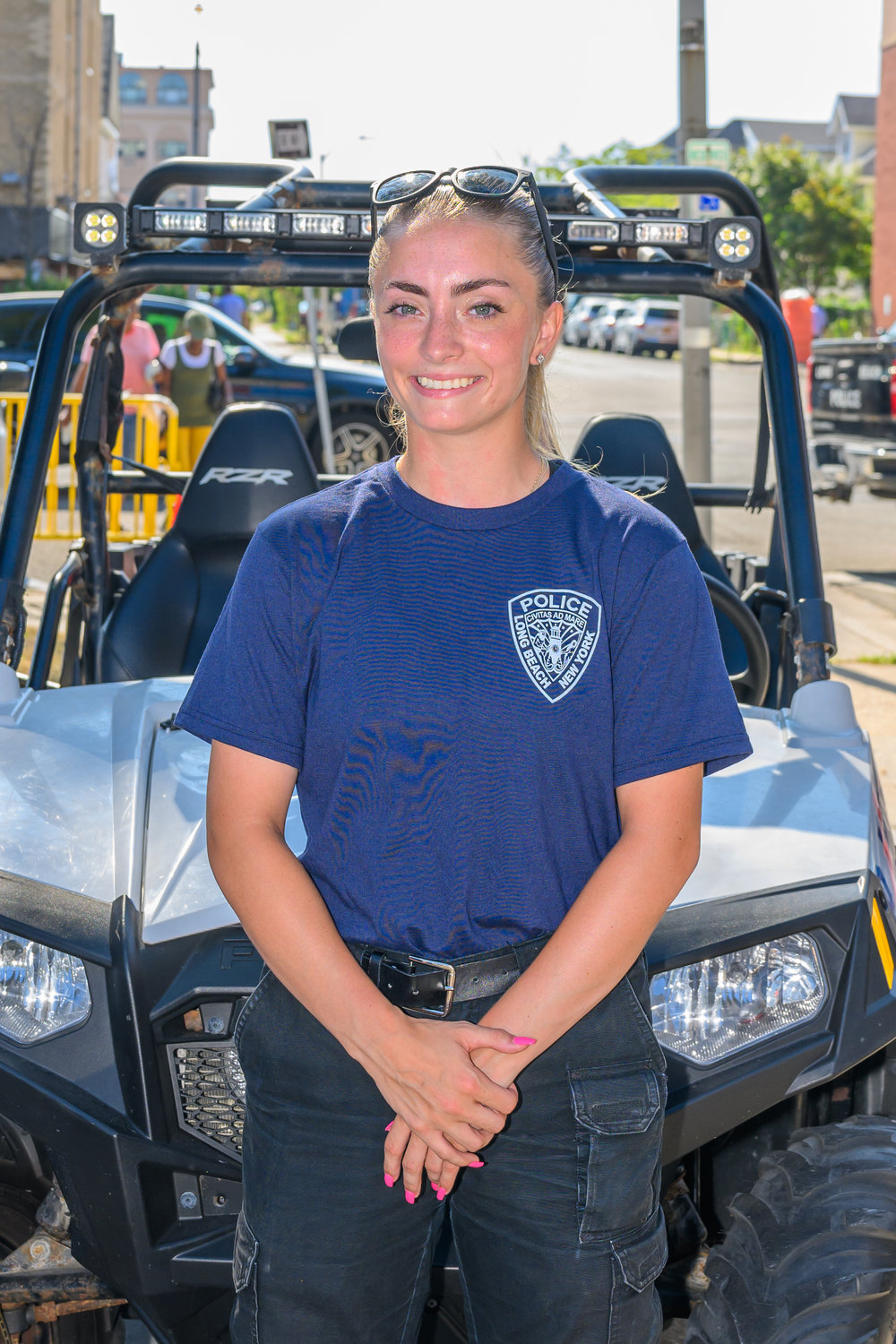 Kristen Murphy, a special officer in Long Beach, is also a multitalented performer.
Bob Arkow/Herald
Previous Next
By Brendan Carpenter

Kristen Murphy, an energetic 23-year-old, has worn the dark blue uniform of a Long Beach police special officer for just over a year. In other venues, you might see her as a dancer, a singer, or even a stunt performer on “Saturday Night Live.”

Police specials usually want to become police officers. So does Murphy want the silver badge or the silver screen? “Why can’t I have both?” she asked recently.

As a special officer, Murphy, who lives in Bellmore, handles administrative work and doubles as Police Commissioner Ron Walsh’s secretary, preparing paperwork and calendars for him.

“Murph,” as she’s known in the department, also supervises the “summer specials,” college students majoring in criminal justice, or related fields, who are interested in working in law enforcement — much like interns. She also attends many of the city’s events with the rest of the department, including last week’s National Night Out.

Murphy didn’t always want to be a police officer, but during the coronavirus pandemic, she took some criminal justice classes at Nassau Community College. She talked with Robert Costello, the chair of the department, and asked him if he could help her get an internship at a police department. In 2020, she became a summer special in Long Beach.

“I wanted to help people and have an active career, so I’m not doing the same thing every day,” Murphy said. “I really respect law enforcement, so, it just made sense.”

When she was younger, she wanted to be in show business. She began singing and dancing at age 3, and eventually attended Dickerson’s Performing Arts Center in Merrick. Her mother signed her up, she said, because “she didn’t want me to be shy. I was naturally shy.”

Murphy said she tried many dance studios while she was growing up. She was fortunate, she said, to have a mother who would take her to different places to train. “I just happened to have the natural ability,” she said, “but I worked very hard, too.”

In 2013, when she was 13, she won “Reach for the Stars,” a Nassau County singing competition for teenagers. There were 64 contestants, and the event took place in Eisenhower Park, in East Meadow. She sang “Popular” from the Broadway show “Wicked.”

At around the same age, Murphy began singing the national anthem at county events at Eisenhower Park. She sang a lot, she said, at occasions headlined by former County Executives Ed Mangano and Laura Curran. She sang the anthem at National Night Out in Long Beach last week.

Murphy attended St. Anthony’s High School in South Huntington, and in 2019 she became a member of the Knicks City Dancers, who take the floor at Knicks games at Madison Square Garden. “I do halftime performances and the T-shirt tosses,” she said. “It’s a great job, but you have to audition again every year. It’s cool, though, because it forces you to stay in shape and on top of your game.” She’ll be auditioning for the 2022-23 season in about a week.

Murphy has appeared in commercials for Adidas, Old Navy, Samsung and Edible Arrangements, among others. Now, she said she is starting to do stunt work and stunt doubling for television shows and movies. “I was just on the show ‘Bull’ on CBS,” she said. “And I doubled for someone and also got murdered, so that was fun.”

She also stunt-doubled for Kate McKinnon in a skit on “Saturday Night Live,” as a breakdancing Supreme Court Justice Ruth Bader Ginsburg. She will also appear in a new movie by M. Night Shyamalan called “Knock at the Cabin,” which comes out next year.

“Stunts and law enforcement go hand in hand,” Murphy said, “because, a lot of the time, they want people who actually train using a gun. It’s hard to teach that so it looks more authentic. Plus, as a cop, you can work four days a week and do other things.”

Murphy said she would love to work for any police agency on Long Island, but she added that the Long Beach department “really tries to emphasize community policing, and that’s important to me.”

Walsh said that Murphy would be taking her Nassau County police test soon, and he hopes the department can hire her. “She’s great with the public, and she’s very bright and motivated,” Walsh said. “Whatever department gets her is getting a great person.”

“It’s not necessarily a conventional lifestyle,” Murphy said of her multifaceted career, “but the dream right now is to make this all work in some way.”