‘A place you can rely on’ 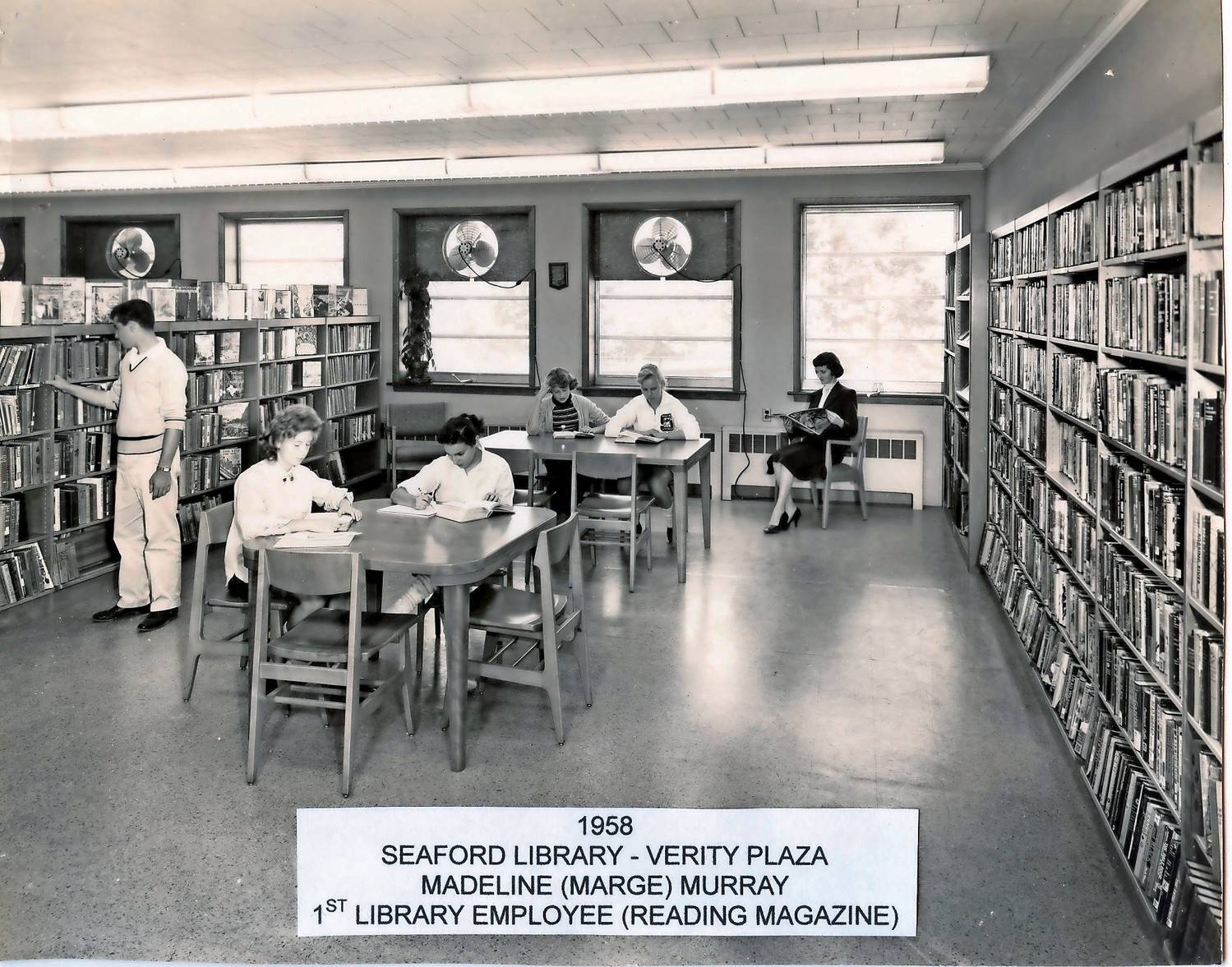 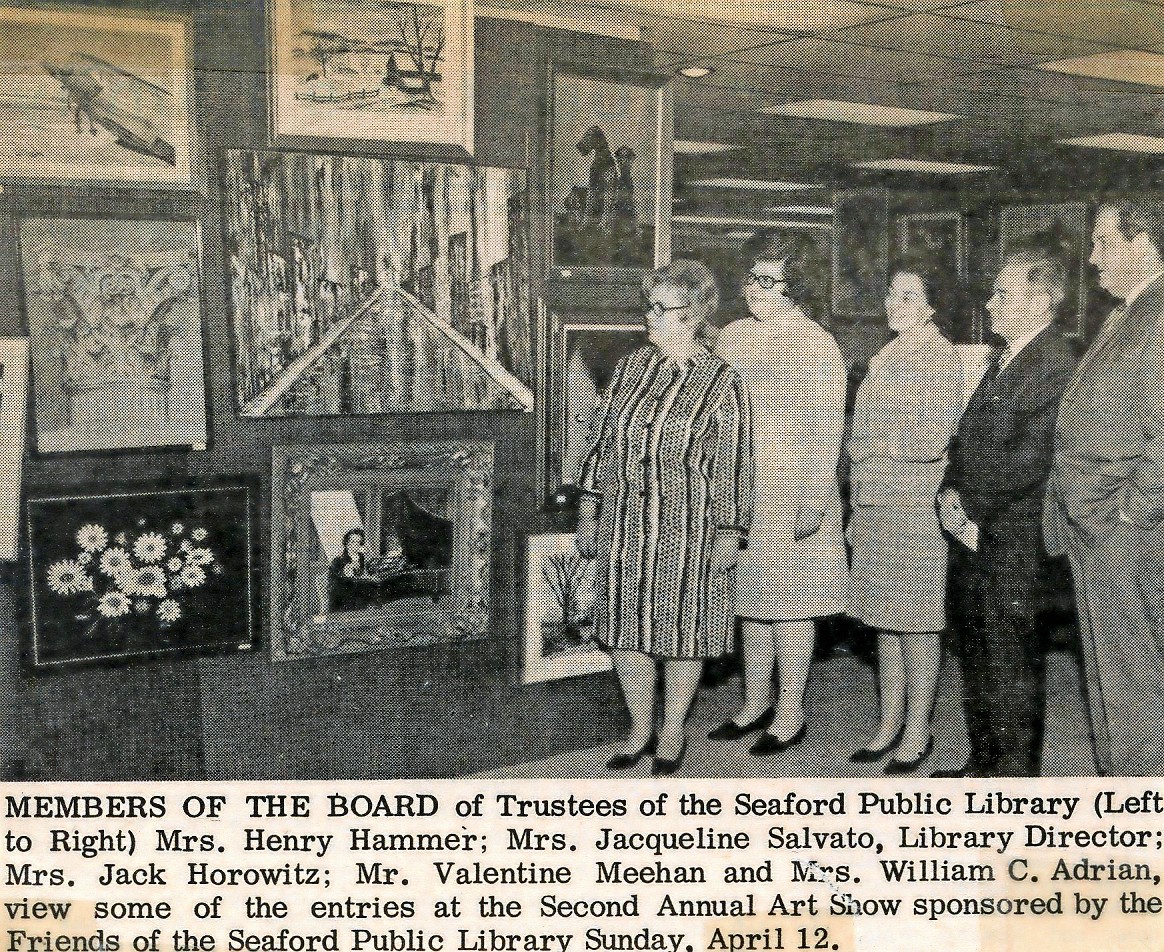 Seaford Library board members ­— including Henry Hammer, Jacqueline Salvato, Library Director Jack Horowitz, Valentine Meehan and William C. Adrian — viewed some of the entries in the second annual art show, which was sponsored by the Friends of the Library in the early 1960s.
Courtesy Seaford Public Library 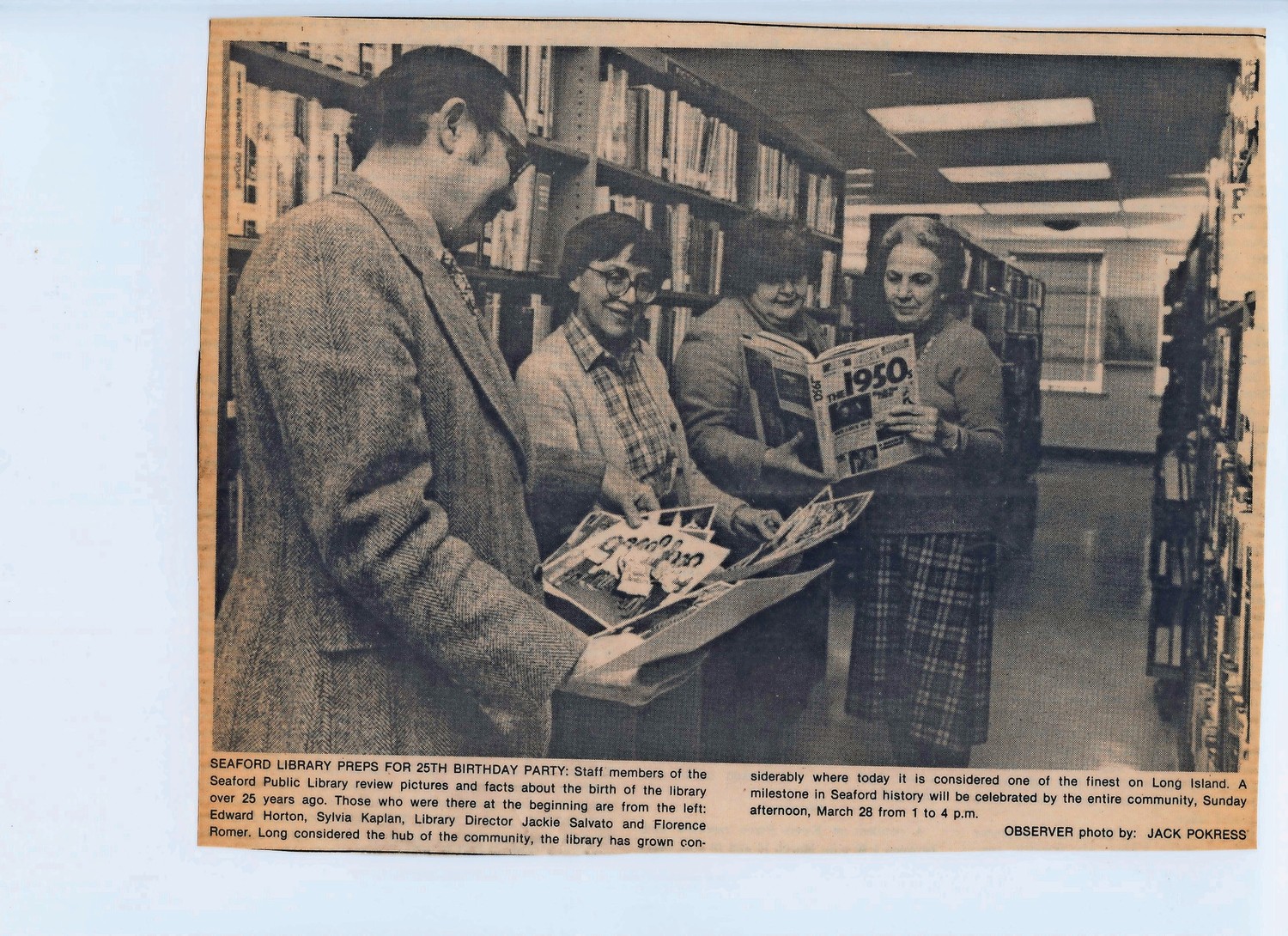 For as long as Peter Ruffner, 62, can remember, the Seaford Public Library has always been a place he could rely on.

When Ruffner was 9 years old, his father took him to the building on Jackson Avenue. They both registered for library cards and sifted through dozens of books in the sports section. After a few minutes, they came across their golden ticket: a book on eventual Baseball Hall of Famer Willie May who spent most of his career playing for the New York and San Francisco Giants.

Ruffner, a baseball fan, recalled reading the book with his father — a memory he would never forget, he said, and one that captures what the library has offered for six decades.

“There is a real vitality in keeping the library running,” said Ruffner, a library board trustee for more than 20 years. “It’s a focal point for people in the community and a tribute to the staff and taxpayers who have maintained it.”

The trustees, staff and community members celebrated the 60th anniversary of the library on Oct. 15. Seaford residents enjoyed live entertainment and crafts, and learned more about the community institution.

The library started as a small loft above the Mid-Island Department Store in Verity Plaza, on Merrick Road, in the early 1950s, according to Director Frank McKenna. After the store closed, the building was turned into the community movie theater.

The library found a new home on Jackson Avenue, in a space that was once known as the Powell Building. The library opened to the public on March 2, 1957.

By 1965, the library had become a staple in the community, McKenna said, gaining full support from taxpayers, who made ample use of its 32,500 books. Throughout the years, he added, the library staff expanded its children and teen programs and worked alongside outside organizations, such as the Lions Club and Wellness Council, to stay connected with the Seaford community.

“Looking through its history, the library has come a long way in terms of materials, programs and services,” McKenna said. “It’s very humbling to think what my predecessors — like Herman Robinton, the first library director — and even his successors had to do to create this institution.”

McKenna said that the library offers a variety of programs to patrons. The library’s annual summer entertainment series, called “Entertainment for a Saturday Evening,” included concerts, comedy shows and film screenings attended by residents of all ages. They also offer a speaker series in the spring and monthly book discussions, he noted.

Minor renovations have helped the library grow. McKenna said additional space for community groups and trustee meetings was created on the second floor, and all four bathrooms were recently refurbished.

Steven Gaughran, 83, a former board trustee, said he was impressed by the library’s growth. He still checks the newsletter because he said he loves to read about the fun and interesting ways that the community comes together at the library. “I was very proud to have been a part of that, and proud to see the great progression of the library,” he said.

Ruffner said he has also seen much change in the past 40 years. “As technology has evolved — lending out records, CDs and having computers — it has also become a part of the evolution of the library,” he explained. “You could get anything instantaneously — not just books.”

Out of 54 libraries in Nassau County, Seaford is one of the smallest. However, Ruffner said folks from neighboring communities come to Seaford’s library to find unique materials and take part in children’s programs.

He said he was happy that the library has been a big part of his life. “I like giving back to a different generation who gave to me at one point,” Ruffner said. “We are making Seaford a better community by providing our leadership, and I applaud the library for celebrating its big 6-0.”