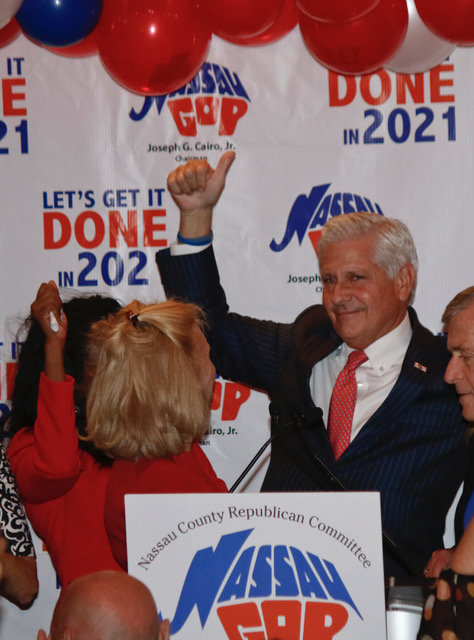 Bruce Blakeman was ahead of Laura Curran in the county executive race as of midnight, though close o 20,000 absentee ballots remained to be counted.
Christina Daly/Herald 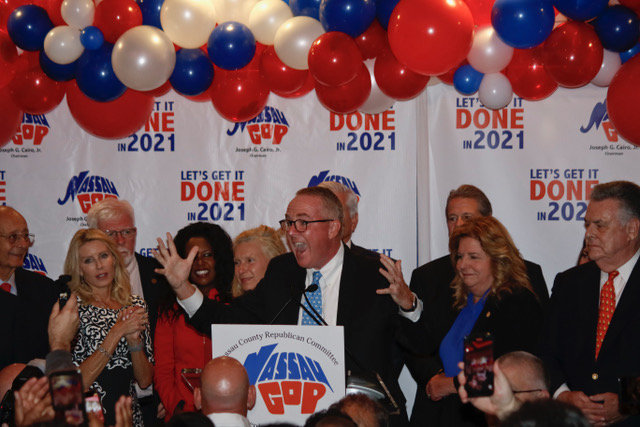 Don Clavin had a commanding lead over Jason Abelove in the Town of Hempstead supervisor race.
Christina Daly/Herald
Previous Next

As of Wednesday morning, Republicans in Nassau County-wide races were inching toward a GOP sweep.

Bruce Blakeman, the Republican Town of Hempstead councilman, had surged past incumbent Democrat Laura Curran in the race for county executive, with nearly all precincts reporting.

On Wednesday morning, Curran had not conceded the race, saying, "This is not over, and we must trust the process."

As of midnight, an official winner had not been declared in the race, but Blakeman had 52 percent of the vote to Curran’s 47 percent. Close to 20,000 absentee ballots remained to be counted, however.

"I think the Republican Party was on the right side of the issues," Blakeman said. "The two biggest issues were taxes and people were very upset with the broken reassessment system.  They were very upset they were not getting the tax relief they were entitled to."

What was certain: Republican Anne Donnelly, a 32-year career prosecutor in the Nassau district attorney’s office, was declared the winner in the race for D.A. Donnelly defeated State Sen. Todd Kaminsky, a Democrat from Long Beach. Donnelly had 60 percent of the vote.

In the race for Town of Hempstead supervisor, Don Clavin also appeared headed toward an easy victory over Democrat Jason Abelove, as of midnight, nearly doubling his vote.

All three legislators and the council  member who represents Oceanside and Island Park also appeared to be headed toward victory.

"After what New York state has seen over the last couple of years, residents were ready for a change," the councilman said. "They were tired of the revolving door of criminal justice, they were tired of law enforcement being treated the way they are all across New York state, and we really sent a message. We have good government in the Town of Hempstead, which was clear tonight by the overwhelming victory, and people wanted change in the district attorney's office, and that's why Anne Donnelly, a career prosecutor, is our next district attorney."

Absentee ballots have yet to be counted. All results remain unofficial until certified.