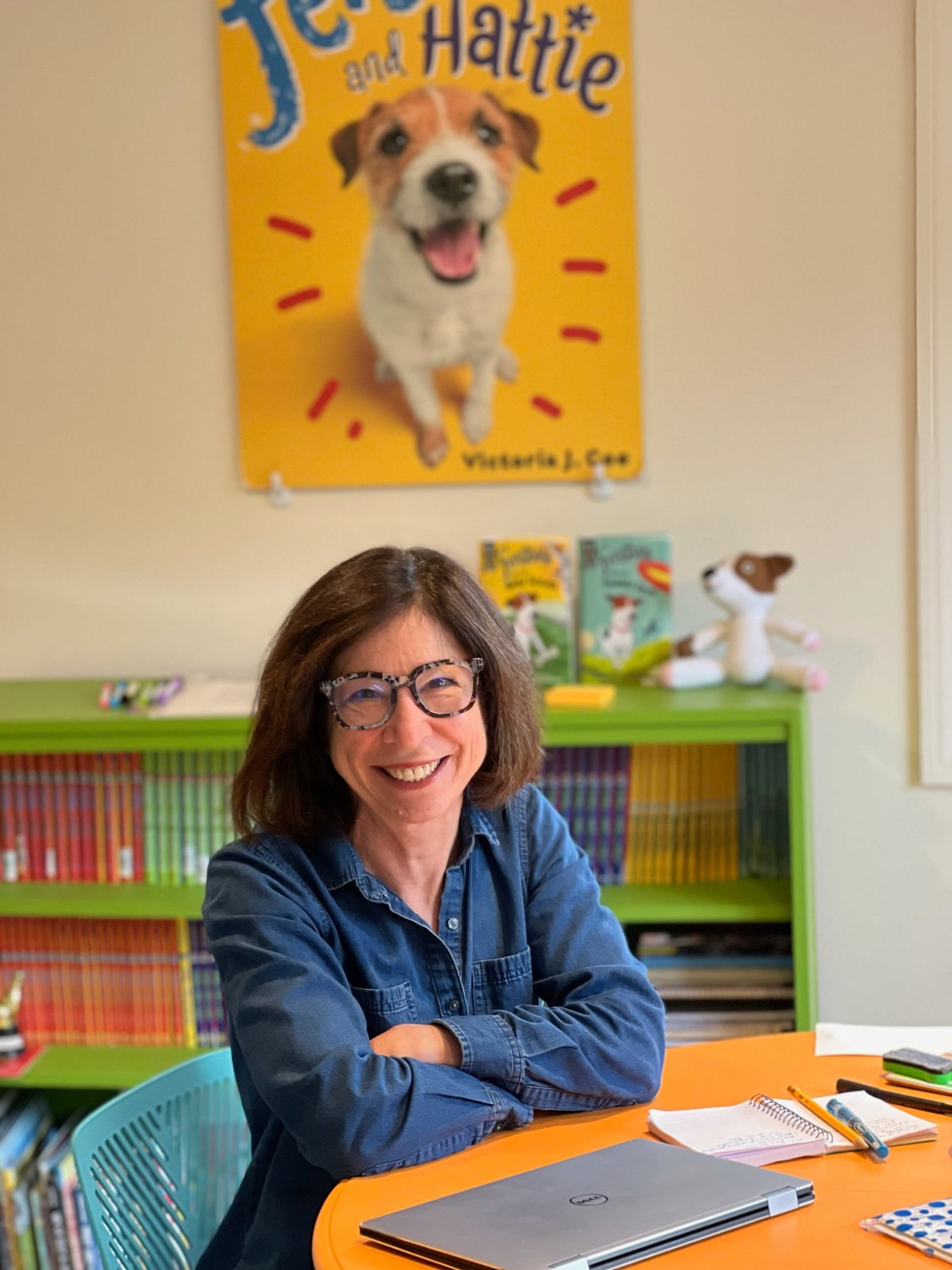 children’s author Victoria J. Coe, known for the “Fenway and Hattie” series, made a surprise visit to school #3 on May 18. Teacher Wendy Rossberg says the visit helped connect classroom lessons to the real world.
Courtesy Victoria J. Coe
Previous Next
By Jake Pellegrino

The door to literary learning opened, quite literally, for Wendy Rossberg’s second-grade class at Oaks School #3 on May 18 when renowned children’s author Victoria J. Coe walked into the classroom. The surprise visit later caught the attention of hundreds on social media.

Rossberg’s students have been fans of Coe’s “Fenway and Hattie” series, and Rossberg and Coe developed a friendship in 2017 when the books were made a selection for that year’s “Global Read Aloud” program.

“I did a lot of videos and Q and A’s for classes, and Mrs. Rossberg’s class was one of the very active participants, and they came onto my radar,” Coe said. “We stayed in touch over the years because she was reading my books to her classes every year, and she was really enthusiastic about them and would always post pictures. One year she even came to Boston, where I live, to meet me for coffee.”

The books tell the story of a Jack Russell terrier named Fenway and a girl named Hattie who move from their apartment in the city to a house in the suburbs and the challenges they face there. The narrative, however, is from Fenway’s point of view.

“Point of view in literature is very hard for a young child to understand,” Rossberg said. “As soon as I started reading the ‘Fenway and Hattie’ books, the kids were like, ‘Oh, the dog’s telling the story,’ and they get it.”

In May, Coe released a new spinoff series of “Fenway and Hattie” geared to younger readers in grades K-3, called “Make Way for Fenway.”

According to Coe’s website, “This new series is just as fun and funny as the ‘Fenway and Hattie’ middle-grade series. The differences? These books are shorter, the storylines are simpler, and the pages are filled with lively, laugh-out-loud illustrations by Joanne Lew-Vriethoff.”

To promote the new books, Coe had scheduled a series of in-person school visits, with the closet to Long Island being only an hour away. When Rossberg discovered this, she had to invite the children’s author to her classroom.

“She knew that these books were coming out and told me about how excited the kids were and that they were going to go crazy over them,” Coe said. “She bought several copies and sent videos of how excited they were. I said, ‘You know, I’m doing a school visit in Westchester County and that’s not that far from Long Island. And she said. ‘Are you serious? Can you come to my classroom?’”

Rossberg immediately approached the PTA, who offered to pay for her hotel stay, and said, “Let’s make it a surprise.”

The teacher said that it was “surreal” the moment Coe walked into the classroom.

“The kids were in disbelief,” Rossberg said. “Some of them were grabbing their books, looking at her photo in the book, then looking up at her and then back at their book like cross-checking and were like, ‘Oh My God, it really is her.’ And when they realized it was her, I had to sit down and calm them all down and then they just started chatting with her.”

She said that the best part of the visit was being able to demonstrate to her students the real-world connections to the lessons being taught in the classroom.

“It really put everything together for them and made them realize, ‘Wow, so she has ideas she took from her own life and used them for her books,’” Rossberg said.

Coe said that the excitement shown by the students was infectious.

“I posted the video on Twitter and it kept getting retweeted and getting so many comments,” Coe said. “Over the next day and a half, it had 50,000 impressions and 14,000 views, and I kept watching the numbers go up and up.”

She said she assumes it got that kind of reaction because of its positivity.

“People were just attracted to the joy because a lot of people share things online that are not joyful,” Coe said. “The joy of these seven and eight-year-old kids was something people really responded to and it struck a chord with a lot of people, including teachers, authors and people who love reading.”

“I love this so much. You’re a rock star!” wrote author Susan Hood, known for her children’s book, “The Last Straw.”

“I keep watching this over and over because it’s so adorable!” wrote New Jersey fifth-grade language arts teacher Ginette Garrity.

But the best evidence of their excitement comes from the students themselves.

“The reason the visit with Victoria J. Coe was exciting as Disney is because she is an author and we are young writers and it’s amazing how a young writer can turn into an author,” Cassidy Deacon said.

“The surprise visit with the author Victoria J. Coe made me feel super happy like I got a new puppy,” Ally Wong said. “But I did not scream. I screamed in my head. I was shocked because I never met an author in real life.”