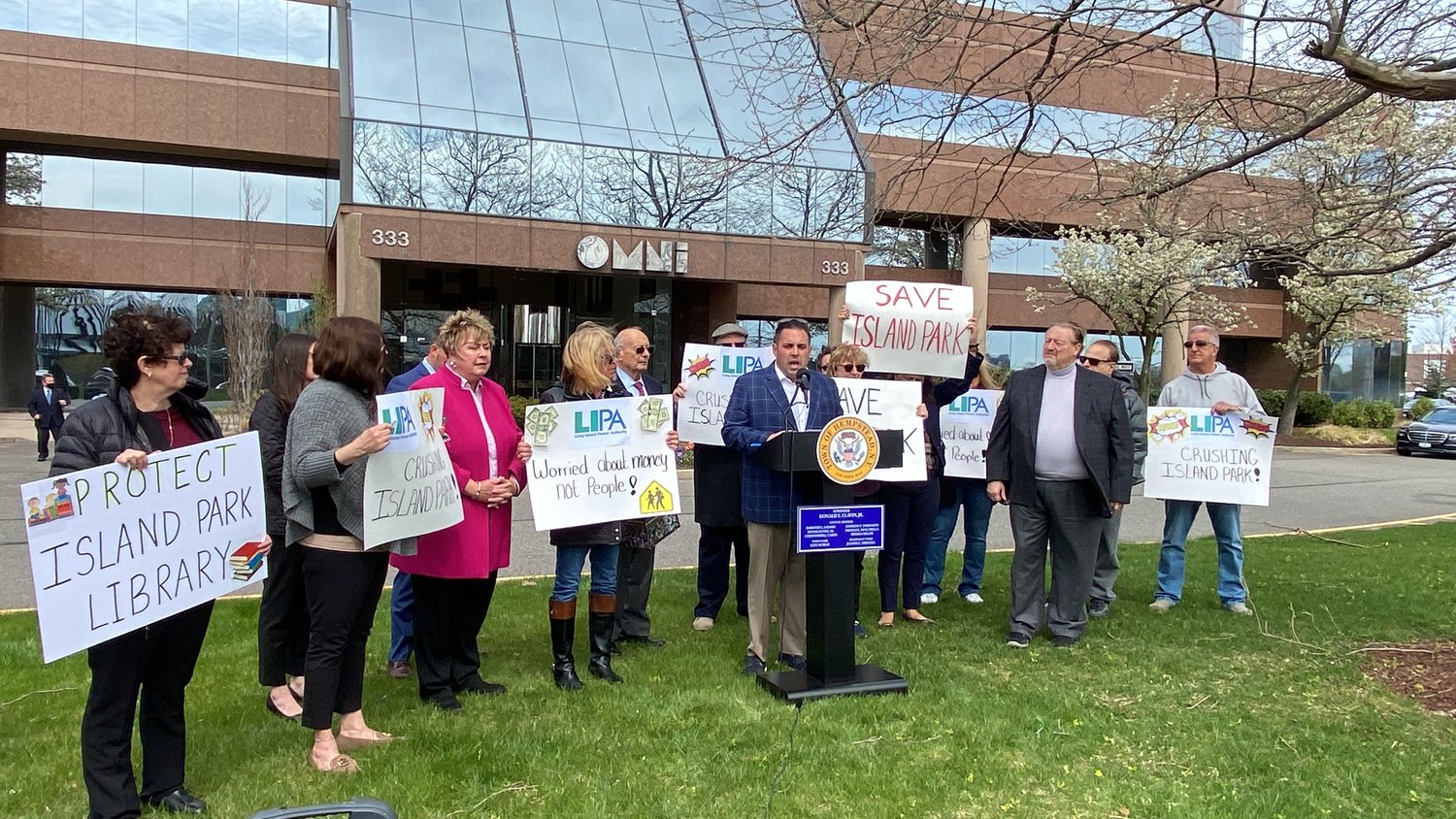 Town of Hempstead Councilman Anthony D’Esposito was joined by Island Park leaders at a protest in front of LIPA’s headquarters on Earle Boulevard on April 21.
Tom Carrozza/Herald 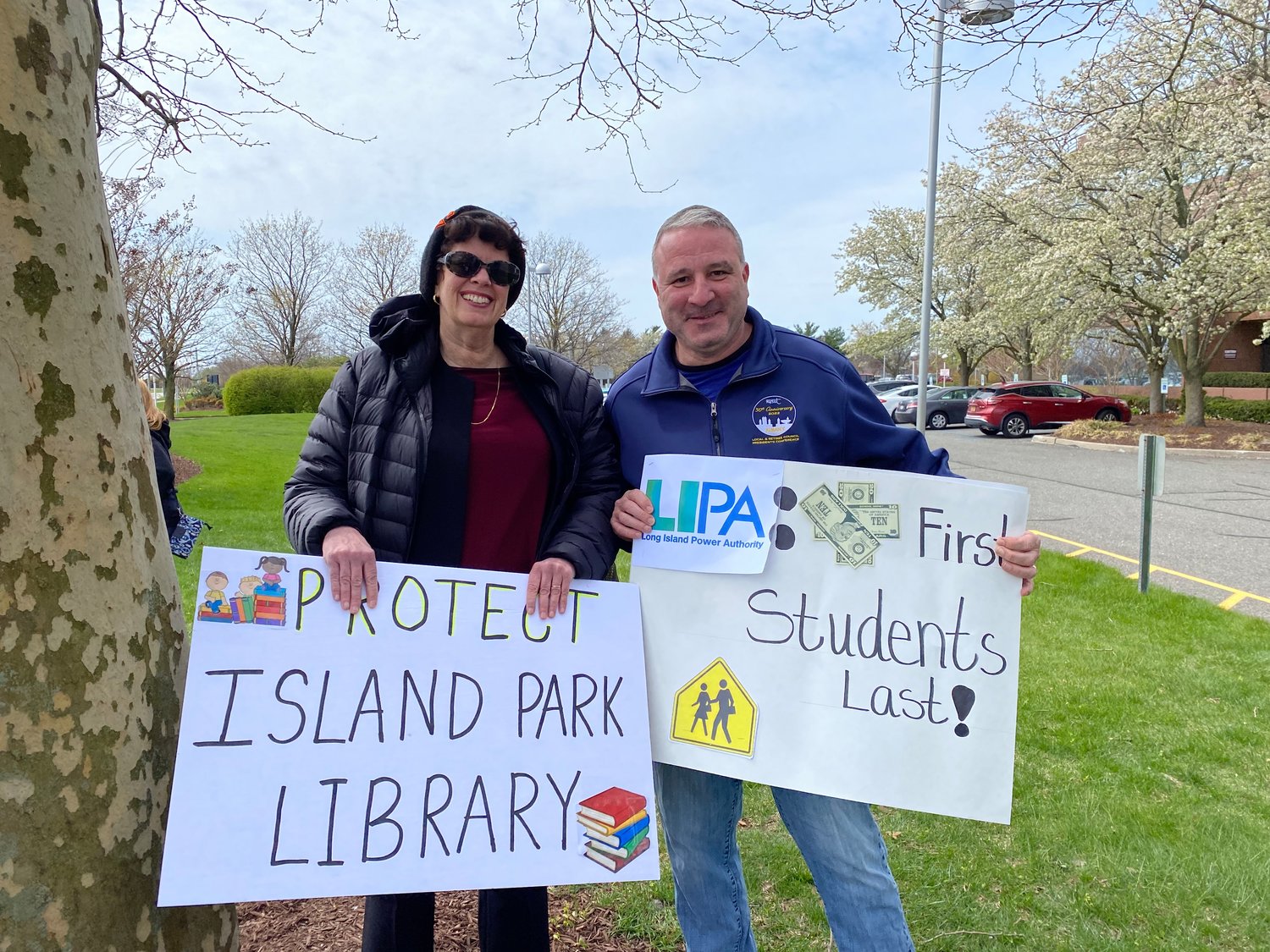 “We have built back better and stronger and we are in the midst of a renaissance in Island Park. And this settlement has a potential to halt that renaissance.””
Anthony D'Esposito, Town of Hempstead Councilman
By Tom Carrozza

Despite a protest at Long Island Power Authority headquarters on Earle Ovington Boulevard on April 21, the Nassau County Legislature voted on Monday afternoon to approve the settlement between the county and the utility over taxes at the E.F. Barrett Power Station in Island Park.

Hempstead Town Councilman Anthony D’Esposito, former U.S. Sen. Al D’Amato and Island Park School District and library leadership gathered 10 days after the Legislature’s Finance and Rules committees voted not to table the agreement. Schools Superintendent Vincent Randazzo and library President Jessica Koenig, among others, have voiced concerns about the increased tax burden that would likely be shifted to residents as part of the settlement.

Legislators Denise Ford and Delia DeRiggi-Whitton asked for the decision to be tabled, but that motion was voted down. The final vote accepted the settlement by a count of 10-8. James Kennedy was absent. Presiding Officer and District 9 Legislator Richard Nicolello, and other legislators who voted in favor of the settlement believed that the county would ultimately lose the case in court.

LIPA has argued that the Island Park power station has been overtaxed for over a decade. The deal will reduce the current $59 million annual tax bill on the Barrett station and the decommissioned Glenwood Landing power plant to $32 million over five years — a decrease of roughly 47 percent. The payments are guaranteed even if the plants close. As part of the settlement, LIPA will waive between $700 and $800 million in past refund liability for tax years dating back to 2010 when the current case began according to Dan Vincelette, who is representing the county in the tax dispute.

The Village of Island Park was tested severely a decade ago, with massive flooding caused by Hurricanes Irene, in 2011, and Sandy, the following year. “We have built back better and stronger, and we are in the midst of a renaissance in Island Park,” D’Esposito said at the protest. And this settlement has a potential to halt that renaissance.” He called for help from the state government.

Island Park Mayor Michael McGinty, who has called the LIPA suit a “plague of locusts,” joined D’Esposito in calling for a fund to protect property owners like the one for those who were impacted by the closure of the Indian Point nuclear power plant last year. In October, Gov. Kathy Hochul awarded $15 million in state aid for local infrastructure projects, job training, decommissioning monitoring, and environmental research in the communities around Buchanan, N.Y., in the wake of the plant’s shuttering.

“We deserve that!” McGinty exclaimed at last week’s protest. “I do not want to see our beautiful village — the home of Senator D’Amato, the home of so many devastated and decimated — property values set so far down underwater that we can’t come back.”

The property taxes paid by the Barrett plant funded significant portions of the Island Park school district and library budgets. Property taxes as a whole comprised $33 million of the district’s roughly $40 million current spending plan, and Randazzo said the plant’s taxes accounted for almost half of that total.

“There are a lot of amazing educational opportunities in the Island Park schools that we offer to our students each and every day,” Randazzo said, “and we certainly don’t want to see those go away due to this settlement.”

The Island Park Library could get lost in the shuffle, because its budget of roughly $1.5 million is a fraction of what the county and school district are discussing, but library Director Jessica Koenig and Trustee Dean Bacigalupo warned that the settlement could jeopardize senior citizen’s and children’s programs as well as staffing.

“As our staff gets smaller, we’ll have to provide less access and less programs,” Koenig said. “This couldn’t happen at a worse time. This library has had so many blows.” Before the coronavirus pandemic began, the facility had over 100,000 visits a year, according to Koenig and Bacigalupo. Now it sees 50,000 to 60,000.

D’Amato pleaded for the Legislature to let LIPA’s opposition make their case in court. He also cited a 1999 decision by State Supreme Court Justice Dana Winslow that LIPA did not follow the law when it finalized contracts worth more than $1 million dollars without approval from the Public Authorities Control Board. “Everything that LIPA has done since then is void ab initio,” D’Amato said, using the Latin term for “void from the start.” We want to make that argument in court.” It was speculated by Legislator DeRiggi-Whitton during the April 11 hearing that school taxes could jump over $200 per month in Island Park.

D’Amato also expressed his frustration with what he saw as a lack of support from State Sen. Todd Kaminsky and Hochul. “We’re a poor, working-class community and this tax is a death knell,” D’Amato said. “You will be killing the taxpayers, and the Legislature has done nothing to help us.”

Kaminsky, who is not running for re-election in November, responded with a statement on April 21. “Over the last two years, I have secured close to $2 million in additional aid for the Island Park Schools in light of the LIPA/Nassau County settlement,” it read. “But make no mistake about it, this deal is between LIPA and the Nassau County Executive and Legislature. While I am not party to it, I will continue to fight for additional resources for Island Park as I’ve done in the past.”

The county and LIPA were due to meet in court in late May before Judge Vito DeStefano. No LIPA representatives spoke at the meeting before the vote.

The vote for the settlement went as follows: