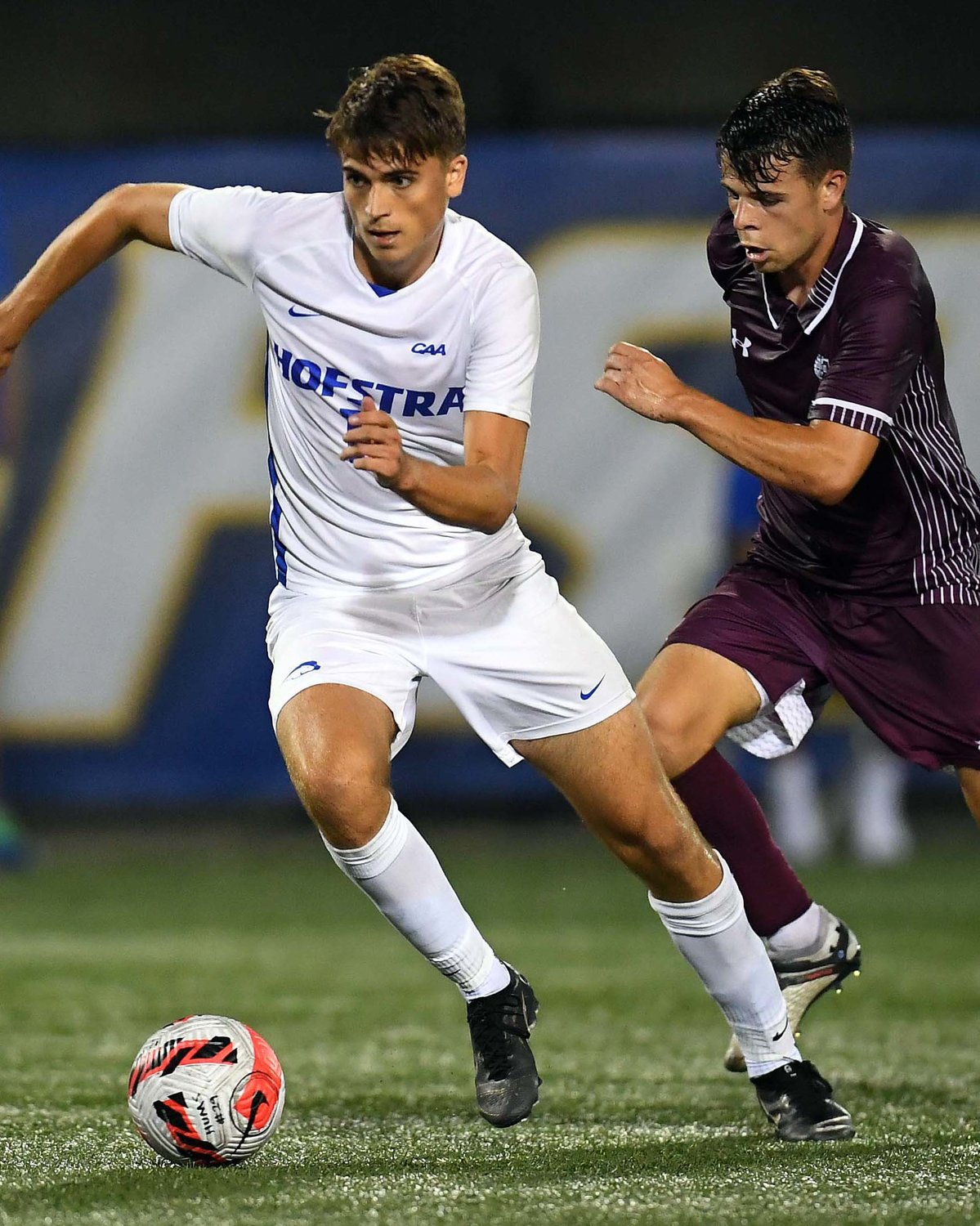 All-American midfielder Hendrik Hebbeker, left, was a big part of a prolific Hofstra offense in 2021 with 9 goals and 11 assists.
Courtesy Hofstra Athletics Communications 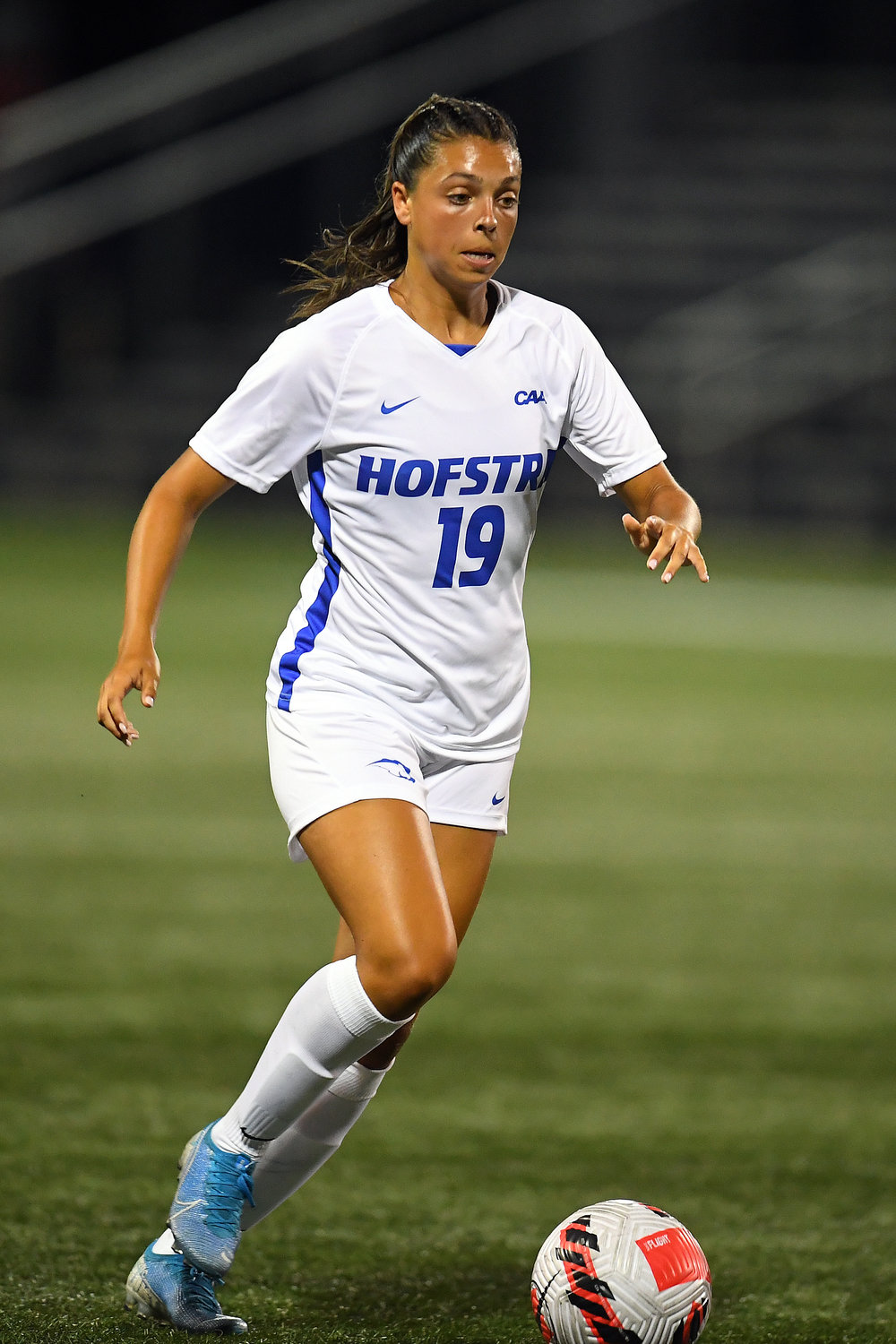 Krista Agostinello is part of a talented defense that helped the Pride capture its fourth conference title in five seasons.
Courtesy Hofstra Athletics Communications
Previous Next
By Andrew Coen

The Hofstra men’s soccer team has a big act to follow on heels of last year’s historic run to the third round of the NCAA Tournament.
Hofstra won two NCAA tourney games for the first time in program history including an 8-2 rout of Big Ten power Penn State in the second round that took the college soccer world by storm. The Pride bring back the brunt of last year’s team that went 18-2-2 with a 17-match unbeaten streak and the program’s first Colonial Athletic Association title since 2015, but lost its best defender in George O’Malley and one of its top goal scorers, Matthew Vowinkel.
“Once you’ve had a taste of it you want more,” Hofstra’s 34th-year head coach Richard Nuttall said. “Hopefully that will drive our returning players forward.”
Hofstra entered the season ranked 17th nationally in the United Soccer Coaches Poll and opened the new campaign with a dramatic 2-1 home win against Fordham on a goal from Eliot Goldthorp with just one second left.
Some key returners from the 2021 team, which led the nation in goals (56) and points (170) include reigning All-American senior midfielder Hendrik Hebbeker, who had 9 tallies to go along with 11 assists last fall.


Ryan Carmichael, who was the country’s leading scorer with 39 points, assisted on Goldthorp’s winning goal. Mason Tatafu, who won Colonial Athletic Association (CAA) Rookie of the Year honors last season and tallied a goal in the Fordham victory, is also a central part of the offense along with team captain Stefan Mason.
On defense, the Pride returned All-CAA First Team goalkeeper Wessel Speel following a sophomore season in which The Netherlands native achieved a 0.90 goals against average with eight shutouts and 72 saves. The backline in front of Speel includes Merrick native Pierce Infuso, who had 20 starts as a sophomore.
“He exceeded all expectations last year as a younger member of the team,” said Nuttall of the former Bellmore JFK HighSchool standout,. “He is a rock solid part of what we do.”
Hofstra, which was picked to repeat as CAA champions as a unanimous selection of the league’s coaches opens the home portion of its conference schedule on Sept. 17 against Northeastern at 7 p.m.

Many new faces for Pride women
Hofstra women’s soccer lost plenty of talent off of last year’s veteran-laden NCAA Tournament team and is seeking another climb to the postseason with a far younger squad.
The Pride returned only a few starters from a 17-4-1 2021 campaign that saw the program win its fourth CAA title in five seasons and reach the second round of the NCAAs. With many new faces, 17th-year head coach Simon Riddiough said it could be a long process before determining who will comprise his consistent starting lineup.
“It’s going to take a lot more work than we had hoped, but we’ll get there,” Riddiough said. “I think we’re going to have a lot of ups this season and downs and hopefully we can come out on a high note at the end.”
Hofstra still returns some key pieces from the CAA championship squad including a stout backline featuring veteran defenders Anja Suttner, Krista Agostinello and Louise Hayden along with senior goalie Skylar Kuzmich, who recorded 12 solo shutouts last season. After a 3-2 season opening win against Fairleigh Dickinson University (FDU), the defense did not surrender a goal in its next two matches, a 0-0 tie with Yale and 3-0 win against Albany.
Senior forward Ellen Halseth is the leading returning scorer off a 2021 season with 10 points and she netted the winning goal against FDU with just 2:19 remaining. The Pride have also gotten a spark plug early on this season from freshmen Thorhildur Thorhallsdottir, who netted the season’s first goal off an assist from fellow Iceland native Dagny Run Petursdottir.
Riddiough sees plenty of potential from some of his local newcomers receiving extended playing time this fall including forwards Leah Iglesias (Carle Place) and Cailey Welch (Glen Head). Sophomore forward/midfielder Olivia Pearse, a former standout at Seaford High School, netted two goals as a freshman.
“We have huge expectations for her,” said Riddiough of Pearce. “She’s got tremendous ability.”
The upcoming home schedule is highlighted by a visit from Pac 12 foe Oregon on Sept. 11 at 7 p.m.. Hofstra also hosts CAA newcomer Stony Brook in the regular season finale on Oct. 23 at 1 p.m. to kick off a new era for the Long Island rivals.