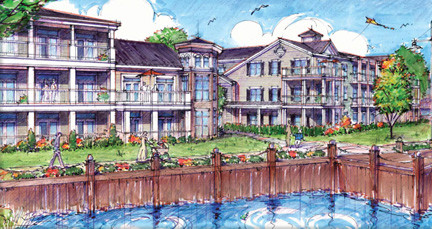 Artist’s rendition of the new homes that are slated for the former Cibro oil storage and distribution facility in Island Park.

For more than a decade the former Island Park oil storage and distribution site laid fallow and abandoned, contaminated by its former use and part of the New York State Brownfield program, which seeks to clean-up toxic waste sites. In the early 1990’s, the operator of the site went into bankruptcy and the site has been abandoned since that time.

Now, however, if a major Virginia developer of townhouse residences around the nation and a Suffolk County development corporation have their way, the former Cibro facility on Washington Avenue will morph into a $60 million, 140-residence complex.

Called The Battery at Harbor Isle & Avalon Yacht View, the development, more than ten years in the making, the giant Virginia-based Avalon Bay communities has partnered with Farmingdale-based Posillico Development to build the project.

Posillico paid $2.4 million for the site at a bankruptcy auction in 1999. The company had planned to build 172 condos on the site and received approvals from the Town of Hempstead and the state’s Department of Environmental Conservation in 2008, but held off when housing prices collapsed a few months later, officials say.

“The project is going very well now that we have an amazing partner in Avalon,” said Michael Posillico the firm’s CEO. “To have the Avalon name is tremendous and their track record means a lot to the project.”

“This project is good news for a community that was devastated by the storm,” he added. We have to work swiftly and have confidence that we will be able to move ahead.”

The deal, signed by Posillico and Avalon just two weeks before Hurricane Sandy devastated the area, gives Avalon 140 rental apartment units, leaving a piece of the property on the water for Posillico to build 32 condos, the great majority with boat slips. The local company will be responsible for the estimated $9 million cleanup of the environmentally challenged site.

Posillico is responsible for the clean up and the site prep. Avalon will follow up with building the infrastructure and the roads, Posillico said.