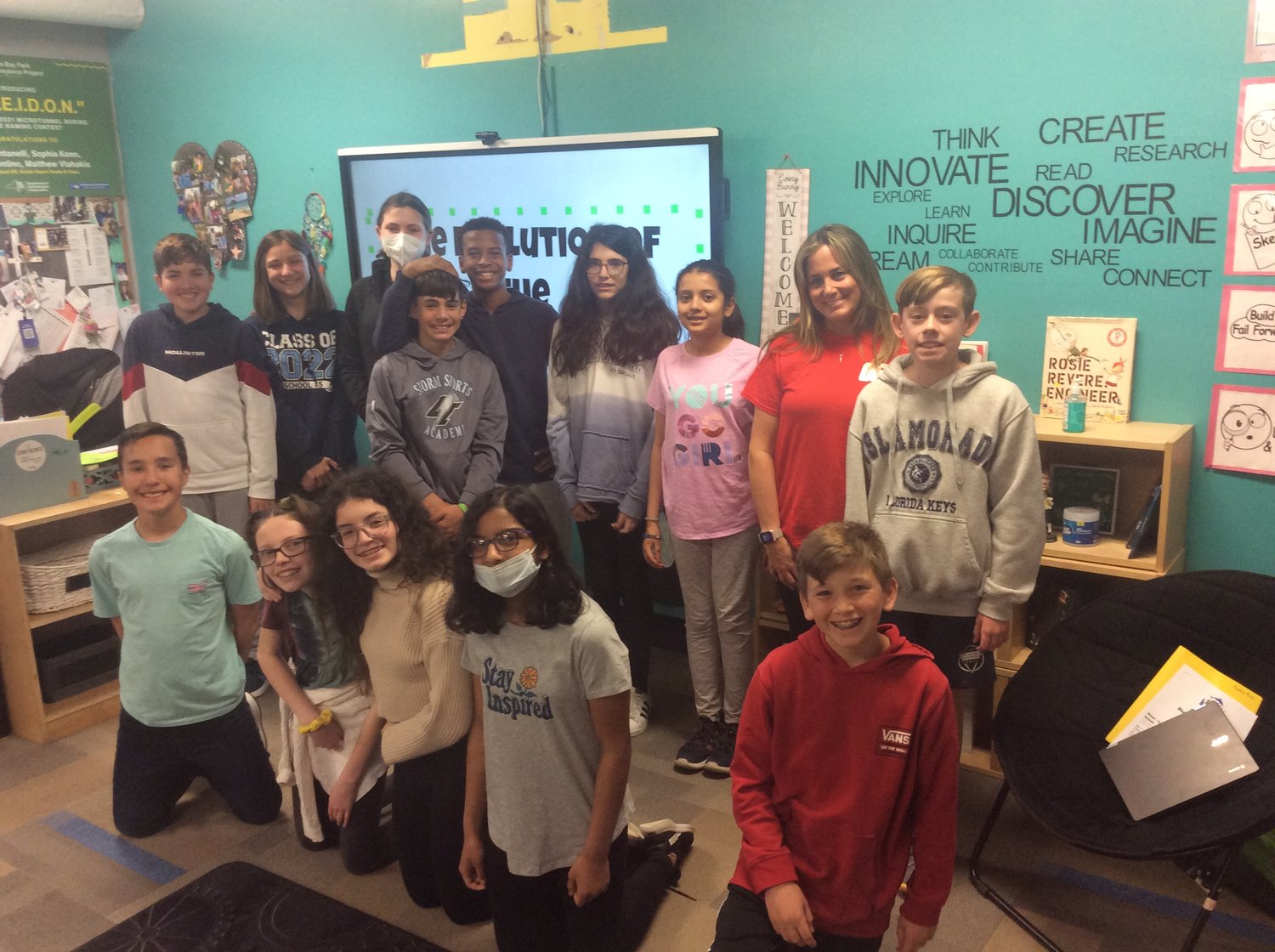 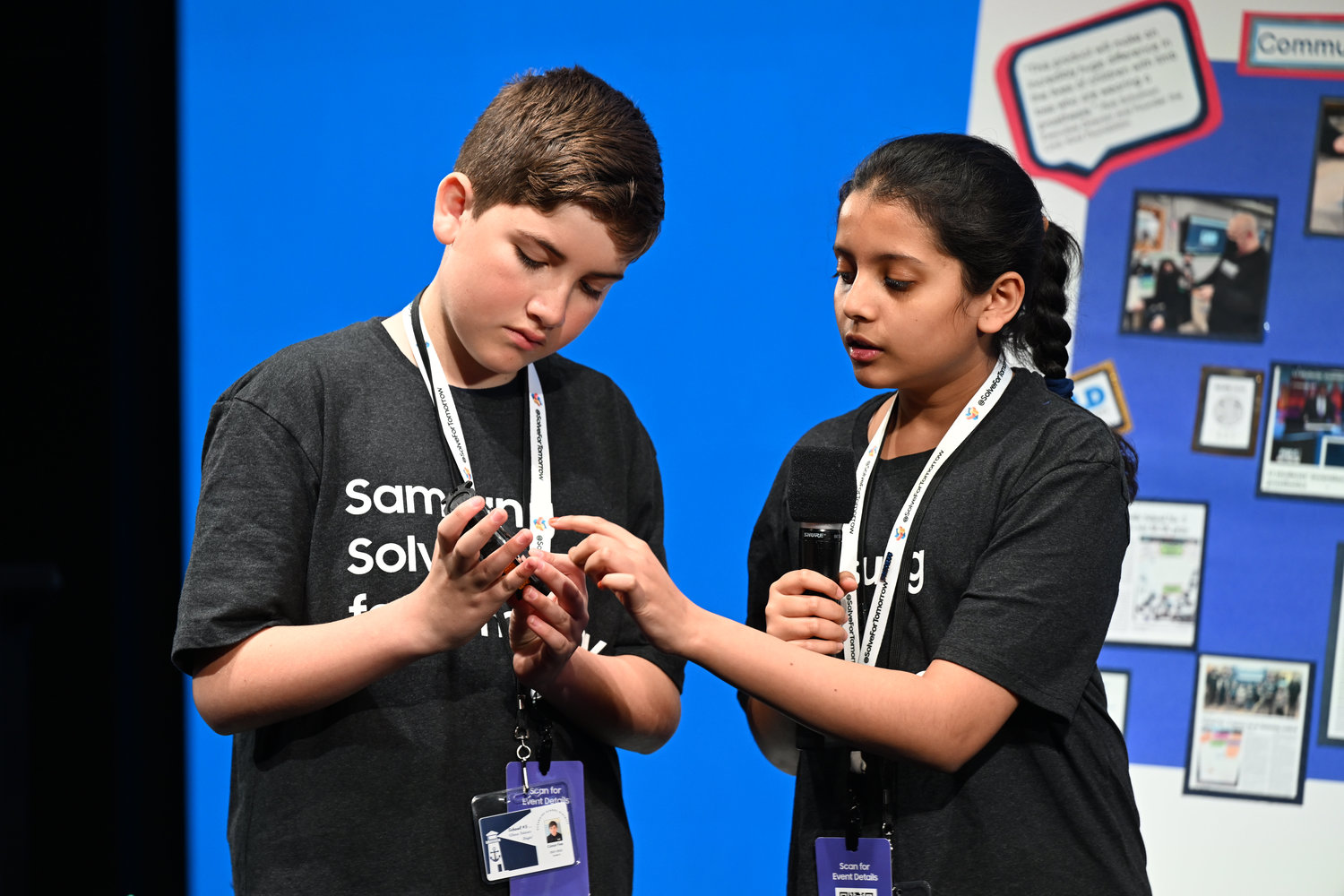 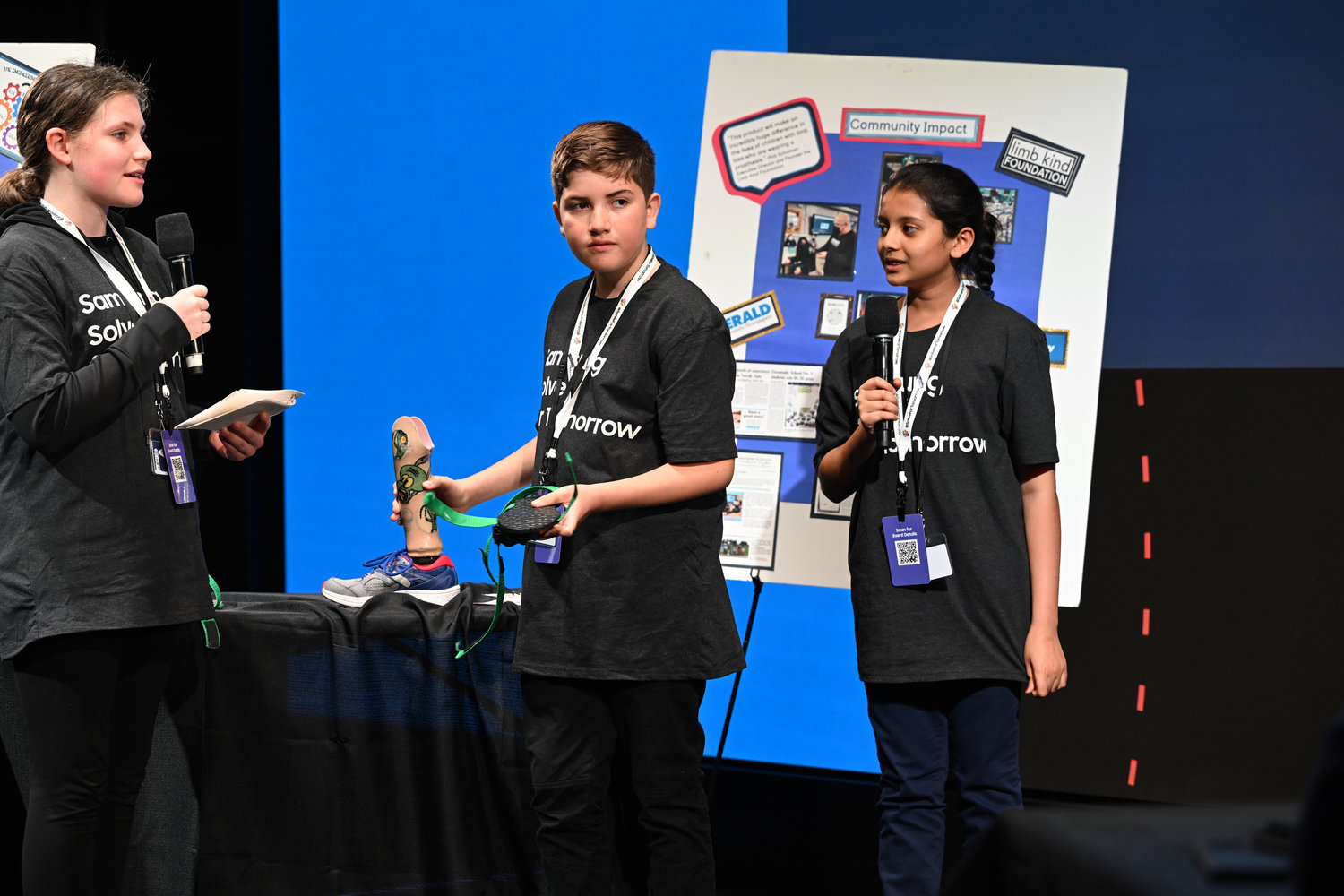 The students were able to walk away with $50,000 and an invention that will help children with limb loss.
Photo courtesy Jon Simon/Samsung SFT
Previous Next

After winning $6,500 and $50,000 in the first phases of the competition, Kristin Stea’s elementary students from Oceanside School 5 traveled to New York City to pitch their project to a panel of Samsung judges for the chance to be one of three classes to win a $100,000 grand prize from Samsung.

The students were among 10 national finalist schools to win $50,000 and advance to the final stage of the Samsung Solve for Tomorrow Science/Engineering Competition for their Pedal Mate invention, a shoe-pedal system to assist children who use a lower body prosthetic to aid them in riding a bicycle. After months of planning and preparation, competing for so much money on a big stage is something that they could not prepare for, and the students could not help but be overwhelmed competing for the grand prize.

“It was unimaginable because it was exciting but nerve-wracking,” said Zainab Shafir, who was among the students representing the class. “We really didn’t know what was gonna’ happen because we’ve never been in that situation, presenting in front of everybody.”

“Personally, it was a bit nerve-wracking,’’ said Conor Fee, another one of the presenters. “Once we actually start up on the stage, you just get caught in the moment. It’s a different experience.”

Stea’s students were the youngest group in the final phase of the competition and faced stiff competition from higher grades. “The other ones were also higher-level,” said Stea. “They used a lot of robotics in their design. Ours was more simplistic.”

The students are part of the Oceanside School District’s Project Extra program for gifted and talented students and after their success in the Samsung competition, Stea sees more innovation to come in the future for the Project Extra students.

“Whether it is Samsung Solve For Tomorrow or creating our own Ted Talks or making inventions and innovations or building a house for H4H and sustainable architecture, or solving a forensics challenge, students feel empowered to make a change in the world,” Stea said. “We are hoping that continues as they move through the middle school and high school and take advantage of research programs, research competitions.”

They were the only elementary school students to reach the final stage of the competition.

With more than 1,000 applications Samsung received, School 5 finished in the top 10. While the students fell short of the grand prize, they were happy to go as far as they did.

“The entire experience is one I really liked because it was new to me and foreign,” said student Katlyn V., the experience, the trial and error situations, the winning and losing.”

The students’ winnings will go to supplies to improve the classroom, with $25,000 used from Samsung products to spend around the school and the rest to purchase new technology such as new laptops and Chrome books.

The students were even more proud that they were able to create an invention that could help children with limb loss.

“My favorite part was when Rob [Schulman] said he was going to try it out on an actual amputee,” student Sophia K. said of the Oceanside resident and founder of Limb Kind Foundation.

“That made me really excited because that means our project actually has the potential to help someone. Even if we didn’t win, I’m still really proud.”