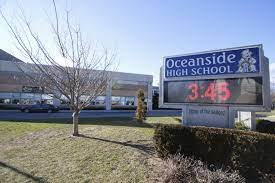 In the aftermath of Nassau County Supreme Court Judge Thomas Rademaker’s rejection of Gov. Hochul’s mask mandate on Monday, the Oceanside School District will go mask optional for students and staff for the time being.
Christina Daly/Herald
By Tom Carrozza tcarrozza@liherald.com

When news broke on Monday night that a State Supreme Court judge in Nassau County had ruled Governor Kathy Hochul’s mask mandate unconstitutional, many parents immediately wondered how that would affect their school-age children. Oceanside Superintendent of Schools Dr. Phyllis Harrington sent a letter to district parents and staff on Monday night that the district will go mask optional for now.

“Effective tomorrow, masks will be optional in all Oceanside schools for all students and staff,” Dr. Harrington wrote in the letter. “However, we are mindful of the possibility of additional court rulings based on the State’s anticipated appeal of Judge Rademaker’s decision. Rest assured, we shall continue to monitor the issue and update the community accordingly.”

The State Education Department also sent out a letter on Monday night, instructing school districts to continue to follow the mandate, citing the Albany County Supreme Court’s recently upholding of the regulation in the Massapequa School District as a conflicting decision.

“It is SED’s understanding that the Department of Health will appeal the Nassau County Supreme Court decision, which will result in an automatic stay that will unambiguously restore the mask rule until such time as an appellate court issues a further ruling. Therefore, schools must continue to follow the mask rule,” the letter from the department read.