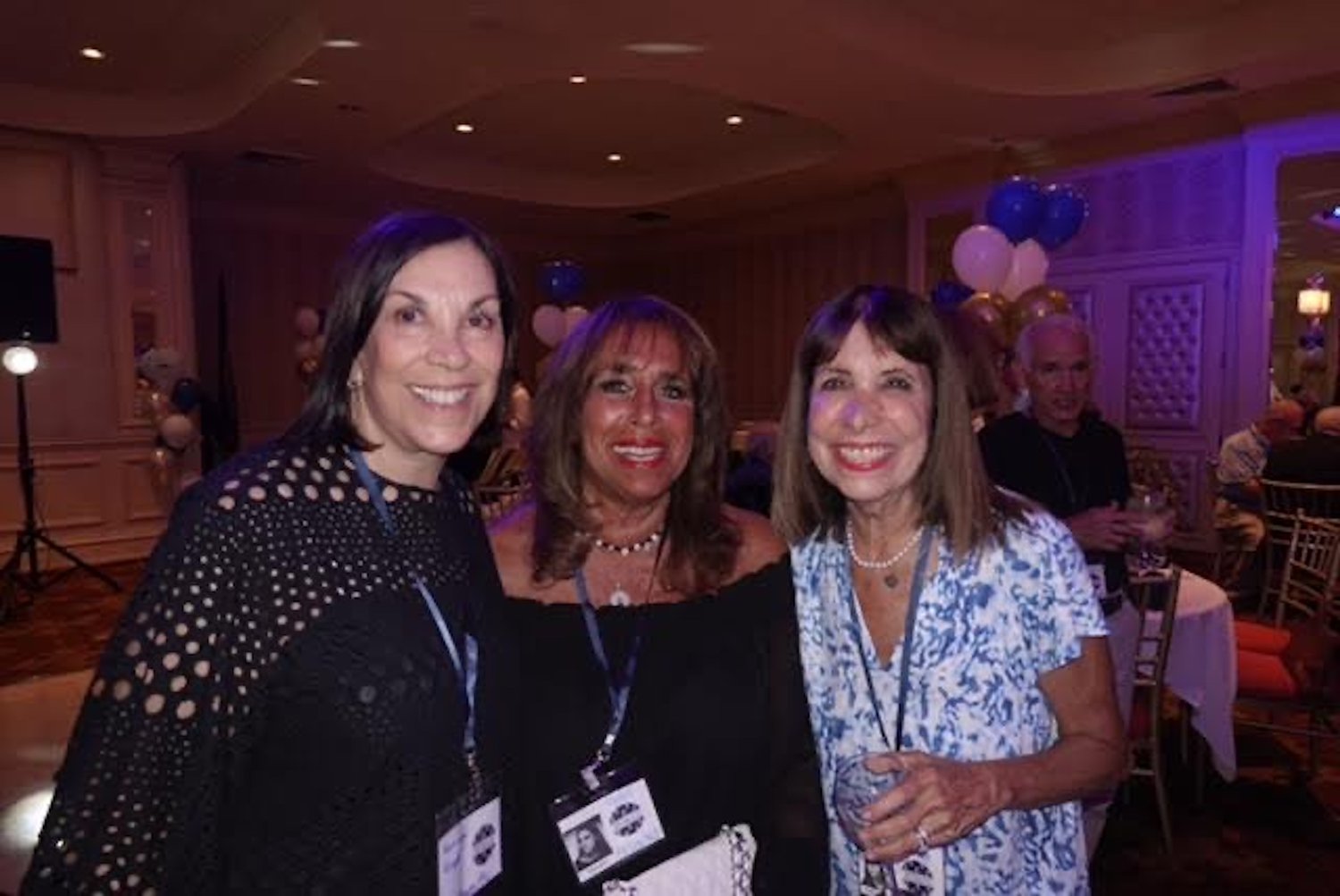 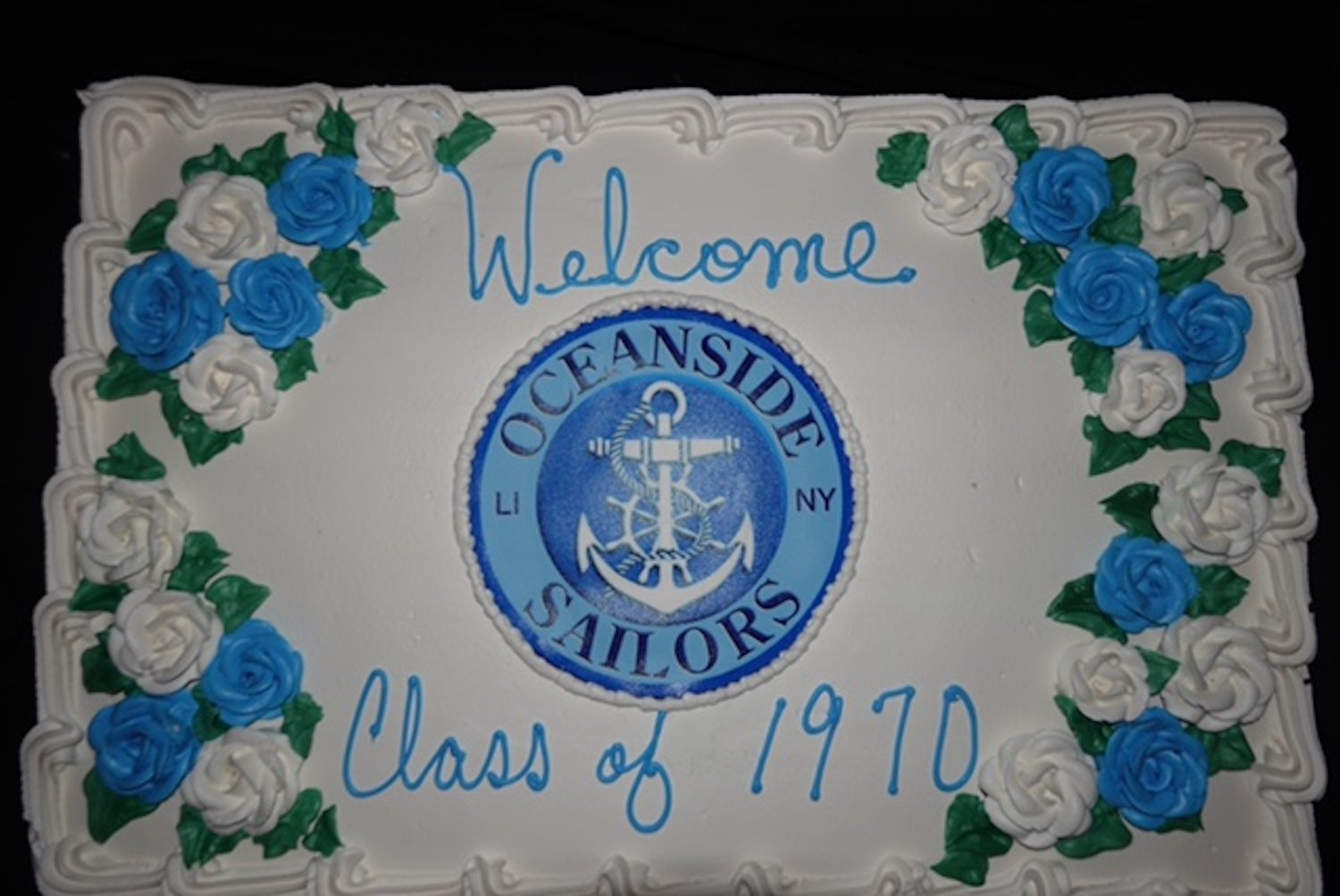 The Oceanside High School class of 1970 recently celebrated its 52nd reunion, twice delayed by Covid-19, where they donated $14,000 to the Luis Alvarez Fund
Photos courtesy Mindy Farber
Previous Next
By Taylor Nicioli

At the height of the Vietnam War, most members of the Oceanside High School class of 1970 marched the school grounds in protest. They were stronger in numbers, as they were a record-breaking class of 806 students. While they didn’t agree on everything, they didn’t need to in order to stand out. Then, and now, over 50 years later, the class of 1970 has proven to be one of the most notable yet.

It was June 20 of 1970 when more than 175 of the graduating seniors had gathered at what once was the Laurel Theater in Long Beach for their “supplementary graduation program.”

Their graduation speaker was Allard Lowenstein, a Democratic representative to the U.S. Congress from New York, who was a passionate spokesman for anti-war and human rights. Originally, he was set to speak at the actual graduation, having won the privilege with a class vote of 386 to 204; however, members of the school board at the time had deemed him to be too political of a speaker, so instead, Lowenstein spoke at a completely student-run alternative.

“This was one of the most famous, or you can say infamous, high school classes that ever graduated, in the fact that it got so much national publicity,” said Mindy Farber, OHS alum and reunion class chair, when recalling her own experience with her class and their ‘counter graduation’ that had been covered by many news outlets, including the New York Times. “And then the class grows up, becomes older and still has this fighting spirit to raise all of this money.”

Farber, now 70 and living in Maryland, attended the ‘counter graduation’ because it felt like “it was the right graduation.” Her parents had been appalled with the situation and thus Farber did not attend the real graduation that was scheduled for the following day. She also does not remember if she ever got her diploma, but she received her ‘counter diploma’ that was being handed out by Lowenstein at the ceremony in the movie theater and still has it to this day.

As reunion chair, she was tasked with finding people from her class to attend the 50th reunion. After being postponed twice due to Covid-19, 185 people attended the reunion that happened this July. It was a three-day event, beginning with a dinner on July 22, the main function with music and dancing on Saturday and a ‘farewell’ brunch on Sunday morning. A notable moment for Farber was during Saturday night, when the DJ had played the song “War” by Edwin Starr. The OHS alums had ran to the dance floor to scream out the words, “War! What is it good for? Absolutely nothing.”

“It was like people became, in one night, 17 years old again. They were all screaming the words out. Everybody got on the dance floor. Nobody was dancing with anyone in particular; the whole class was dancing together, and screaming out the words of songs,” said Farber.

The Class of 1970’s legacy doesn’t end there, because now 52 years later, they made one more impact in Oceanside. For their reunion class gift, they raised over $14 thousand to go toward the Luis Alvarez fund, a scholarship that is given to children of Sept. 11 first responders.

Alvarez was an Oceanside native and former New York Police Department detective who was cancer-stricken following his Ground Zero rescue and recovery work.

Additionally, a park in Oceanside was renamed in his honor in 2021.

During the reunion, several people had made donations to the class gift, including one member who had made a check for $5 thousand and another who sent one in for $1 thousand. Majority of the funds had come in from the people who originally planned on making it and paid to go to the reunion but could no longer attend. In lieu of asking for a refund, they told Farber to donate their money to the class gift.

Another member of the reunion committee, Wendy Cooper Seay, 70 and living in Virginia, was tasked with researching an organization for the class gift to be donated to. Upon her research, she found the Luis Alvarez scholarship fund, run by the First Responders Children’s Foundation. It was  founded in 2019 and sets aside $25,000 a year to be given to a child who has had a first responder Sept. 11 parent sickened by Ground Zero recovery work. This year, the college scholarship fund received its first ever outside funding due to the OHS Class of 1970.

Seay said she was very touched by the story behind the fund and knew she had found the right fund for their class gift. Seay said this choice of organization was well backed by the members of the class. For one of the reasons behind the generous donation, she said “I think we have always been very much aware of the world beyond Oceanside and wanted to be involved in it.”

The scholarship has been chosen to go to Kacey Pupo of Rockland County, whose dad, Christopher Pupo, had worked side by side with Alvarez as first responders. Maria Elefante, another member on the OHS class of 1970 reunion committee, is hoping to present the check to Alaine Alvarez, Luis’ widow, on behalf of the class in the next few weeks. The event is planned to be held at the Detective Luis G. Alvarez Park in Oceanside. Elefante, who has lived in Oceanside her whole life, knew the Alvarez family personally.

“They’re good people. He went through a lot, and did a lot,” Elefante said. “We’re just so proud to be able to donate to his fellowship. For the first responders, for the children, it’s all very special for us.”