90-year-old living in a trailer on property, waiting to go home 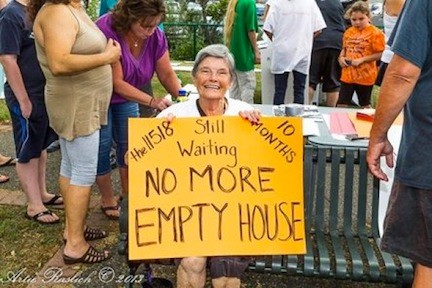 Ninety-year-old Muzzy, of East Rockaway, shown here at a local rally, is living in a trailer on her property until her home can be rebuilt.
Courtesy Art Raslich 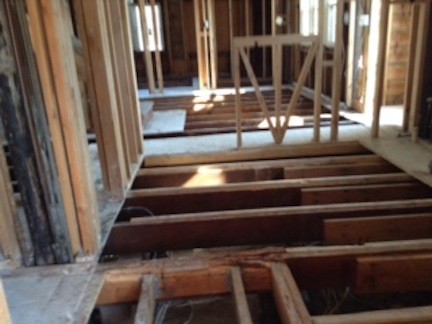 Muzzy’s house in East Rockaway has been declared uninhabitable. She is living in a trailer on her property.
Courtesy Kate Hughes
By Mary Malloy

Kate Hughes says that her 90-year-old mother, “Muzzy” — as she’s known to her neighbors and friends — has been victimized twice: once by Hurricane Sandy in October 2012, and again, for the past two and a half years, by the system that she turned to for help.

Currently living alone in a trailer on the property of her East Rockaway home, where she has lived for the past 68 years, Muzzy — who at first glance looks considerably younger than her years but has “aged considerably” recently, according to her daughter — doesn’t understand what the delay is in getting back into her home.

Muzzy and her late husband, Jim, moved into the two-story, four-bedroom home in 1947, and raised 11 children there.

Technically within the village but close to the waterfront community of Bay Park, her house was in Sandy’s path, and was inundated by 6 feet of water. Muzzy (whom Hughes declined to identify further, fearing for her mother’s safety) lived with another daughter in Massapequa for a year and a half after the storm, but wanted to go back to her home.

“Getting through all of this red tape is a full-time job,” said Hughes, who lives in Ronkonkoma. “My mother, who has survived polio and breast cancer, doesn’t want to leave her home again, so we’re going to demolish and rebuild — but we can’t do that unless we have the money to be able to rebuild. And we’re $100,000 short.”

Hughes said that county, town and village officials have helped her navigate all of the post-Sandy regulations and insurance considerations, but none have been able to make her mother’s case move forward any faster.

“The caseworkers at New York Rising are great, but they’re backed up, and they can only do so much,” Hughes said. “The system doesn’t allow them to coordinate at all … they just take the paperwork and the grief.”

She explained that she is opting to demolish and rebuild her mother’s house to code instead of selling it to the state because her mother wants to stay there. “She was with my sister in Massapequa after the hurricane, while a local organization, the11518, helped to clean up her property … but all she every really wanted was to be home,” Hughes said. “But nobody cares … it’s all about numbers, and not about people.”

Think about accessibility when you elevate your home