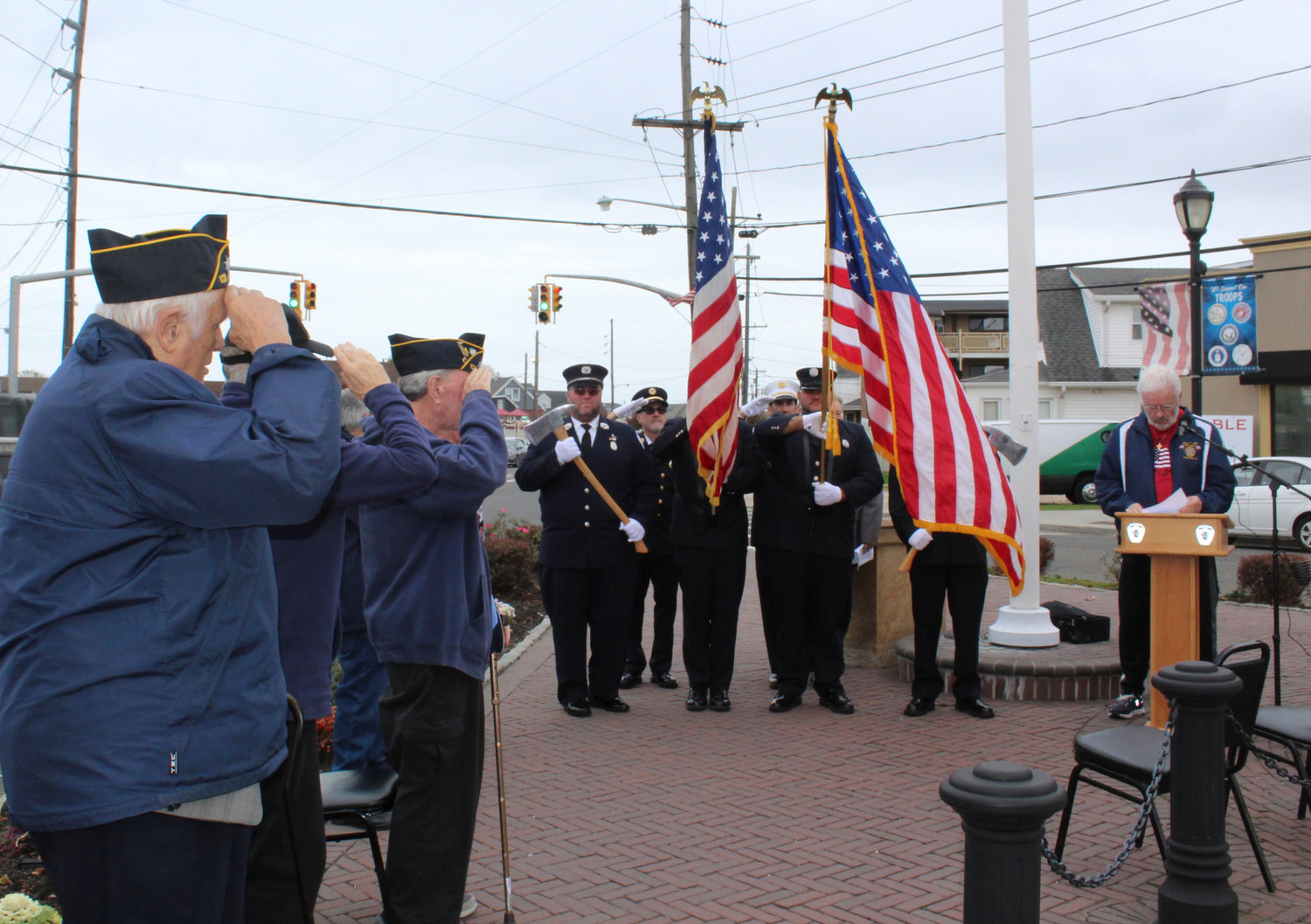 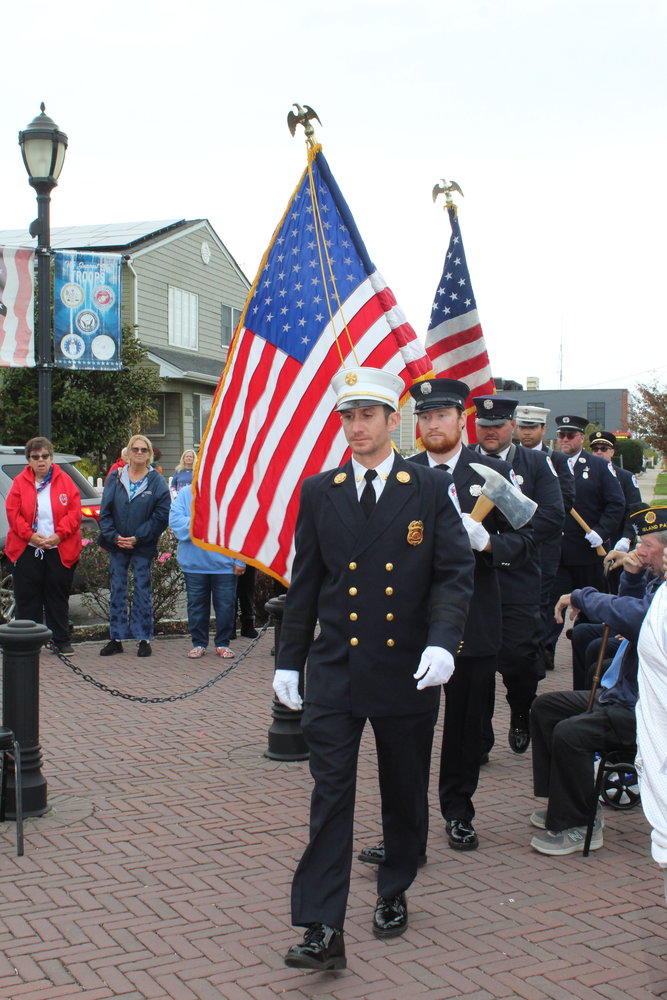 The Island Park color guard began the ceremony by presenting the American flag.
Karina Kovac/Herald
Previous Next
By Karina Kovac

On Veterans Day, the nation pays tribute to the valiant men and women who have served in the military. In Island Park, hundreds of residents left the lives they knew over the decades to preserve our collective freedoms. Last Friday, they were honored at the American Legion war memorial.

Bob Wilson, the village coordinator of veterans activities, served in South Vietnam from 1965 to 1967. Age 21 when he went in, the time he served, he said, was like no other. “It was unique — it was probably the best education I’ve gotten my entire life,” Wilson said. “You grow up fast. As much as I thought I was an adult going in, I was certainly a different person when I came out.”

Stationed at a field hospital in Saigon, and then moved to another hospital at the Cambodian border, Wilson supplied critically needed remedies to injured soldiers. Helping those fighting during a particularly bloody time, he said, “Strengthens your faith, strengthens your trust in your fellow man and county. I came out a better person. I’m very grateful for that.”

To this day, Wilson said, his time in the military helps him keep things in perspective. “Never complain about (the weather),” he said. “People say, ‘Well it’s 90 degree, it’s really hot.’ I worked in, like, a MASH unit, and I had a supply tent that I worked out of, and the temperature in the tent on an average day was 130 degrees.”

He said he has no regrets about his time in Vietnam. He added that he was “happy I was there, and I did that because it made me a better person today.” He was also pleased that the village where he’s lived since he was 11 had the ceremony. “I love this village,” Wilson said. “It’s a great place because we do stuff like this. We honor our veterans, we take care of our children. Nobody does anything by themselves.”

Another attendee was Navy veteran Patrick Martin, who served on three aircraft carriers from 1984 to 1988 — the USS America, the USS Saratoga and the USS Dwight D. Eisenhower. “We went to the Mediterranean and South American and the Atlantic,” Martin recounted. “I had a wonderful experience in the Navy. I didn’t experience what a lot of veterans experienced. I feel bad; it was just wonderful. I was seeing the world like the commercials back then.”

Doing four years on flight decks as a jet mechanic, Martin said he was the “last guy to see the planes go off the aircraft carrier,” which was “controlled chaos.” One event that stood out was when planes from his ship bombed Libyan dictator Muammar el-Qaddafi’s residence during Ronald Reagan’s presidency.

“We helped load the ammunition onto the planes,” Martin recalled. “He was a menace to society,” he added of Qaddafi, “and we didn’t hear again from him for 20 years, so it was very successful.” Working closely on the ship with other crew members, the bond is indescribable, Martin said. “They’re the most selfless, unbelievable people you ever meet in your life, the privilege of meeting in your life. They just love the county, and it’s a tremendous bond.”

Island Park Mayor Michael McGinty didn’t serve in any war, but by hosting the Veterans Day ceremony each year, he said, he has become a collector of the many stories of valor that involve veterans from Island Park.

One tale is that of Mike Masone, a World War II veteran who, along with other Island Parkers, took part in capturing the Ludendorff Bridge at Remagen in 1945, which gave the Allies a foothold in Germany and opened the country up to invasion. “Then … Mike and two others were invited back to the town for the 50th anniversary of World War II … and they went,” said McGinty.

McGinty’s father, Francis, was also a World War II veteran, serving in the South Pacific for six years. “He was a gunner in one of the planes off a battleship, although the men didn’t talk about their World War II service,” he said. One story, however, was retold, of the battle of the Philippine Sea, which would later be known as the Great Marianas Turkey Shoot in Midway, a major naval battle that eliminated Japan’s ability to control the seas.