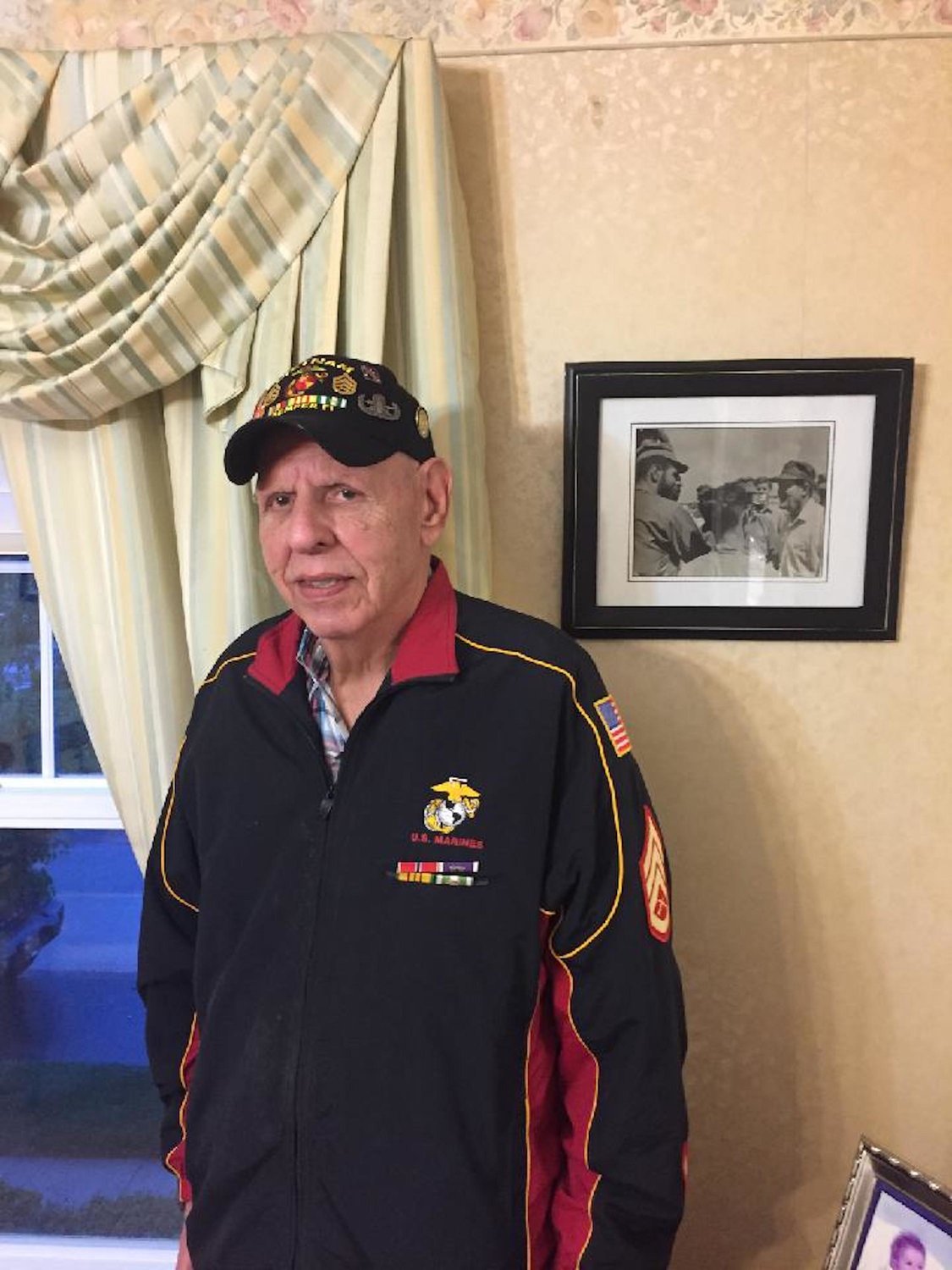 Barry Lederman of East Rockaway, Vietnam veteran and community volunteer, proudly poses with a picture of himself receiving his purple heart from Vice President Hubert Humphrey at Da Nang Hospital in Vietnam in August 1965.
Courtesy Barry Lederman
By Jake Pellegrino

For Vietnam veteran Barry Lederman, his service didn’t end when he was honorably discharged from the Marine Corps in 1969.

After his time in the corps, he dedicated much of his time to serving the Oceanside community by teaching youth about the service, helping other veterans and participating in community service projects. But his greatest post-military service will come on Monday when he marches as the Oceanside Memorial Day parade’s Grand Marshall.

“I volunteer for the VA in East Northport where I do a lot of work with the physically disabled veterans and I do a lot of volunteer work and serve as Vice Commander for the Oceanside VFW,” Lederman said. “This past Monday, I went to the school six kindergarten class to give a speech about the service; a lot of school boards call me to do stuff like that pretty often. I also belong to the Marine Corps League in Massapequa where I set up for their parties and I’m going to do a flag raising ceremony at a park in Oceanside soon.”

Although he lives in East Rockaway, he joined the Oceanside VFW post after finding a kinship with the members there.

“All my friends are all Vietnam vets so we looked around at the East Rockaway, Baldwin and all the other local VFWs and found the nicest one was the Oceanside one,” Lederman said. “We met a few other guys who were Vietnam vets and around our age, so we felt more comfortable and at home; you want to be among guys who fought where you fought”

Lederman is originally from the Bronx and a graduate of DeWitt Clinton High School and at only seventeen-and-a-half years old was already eager to serve his country.

“When I went to the recruiter, he said ‘I can’t take you, you’re not emancipated,’” Lederman said. “ ‘I said ‘whoa, whoa, whoa, ‘what are you talking about? I’m not a slave. He says, ‘you’re an idiot, you’re not 18 years old, you got to bring your mother here.’ And she came down to sign the papers and turns to the recruiter and says ‘he’s your problem now.’”

After almost seven years of active duty and earning three purple hearts and one bronze star, he returned home to work for his former officer, Major More, of Banker’s Trust.

Banker’s Trust was eventually bought out by former U.S. Secretary of Commerce Wilbur Ross, who later opened his own company, called W.L. Ross LLC, and hired Lederman, where he worked for 40 years. However, in 2019, it was sold to Invesco and merged with Oppenheimer and all of its employees were given a choice to move to Singapore or lose their jobs. Lederman chose the latter in favor of serving the community full-time.

Of the honor of being selected to lead the parade on Monday, he said.

“I’m very, very proud of that; extremely proud,” Lederman said. “I have a little speech I’m writing right now about my tour of Vietnam; I’m not going to go into too much detail and show where I got shrapnel in my leg or got my head opened up but I’m going to talk about the good times and the bad times. I’m very loyal to the United States and I’m proud of everybody else who is loyal to it because this is my country and I have no intention of ever leaving it.”

The parade kicks off at 10 a.m. at the schoolhouse green on Foxhurst Road just east of Long Beach Road and marches through the local streets to the high school. It will be followed by a memorial service in the high school auditorium where various leaders from religious organizations and the VFW will speak, including Lederman.