Herbert Rosenberg survived over a year in Nazi captivity 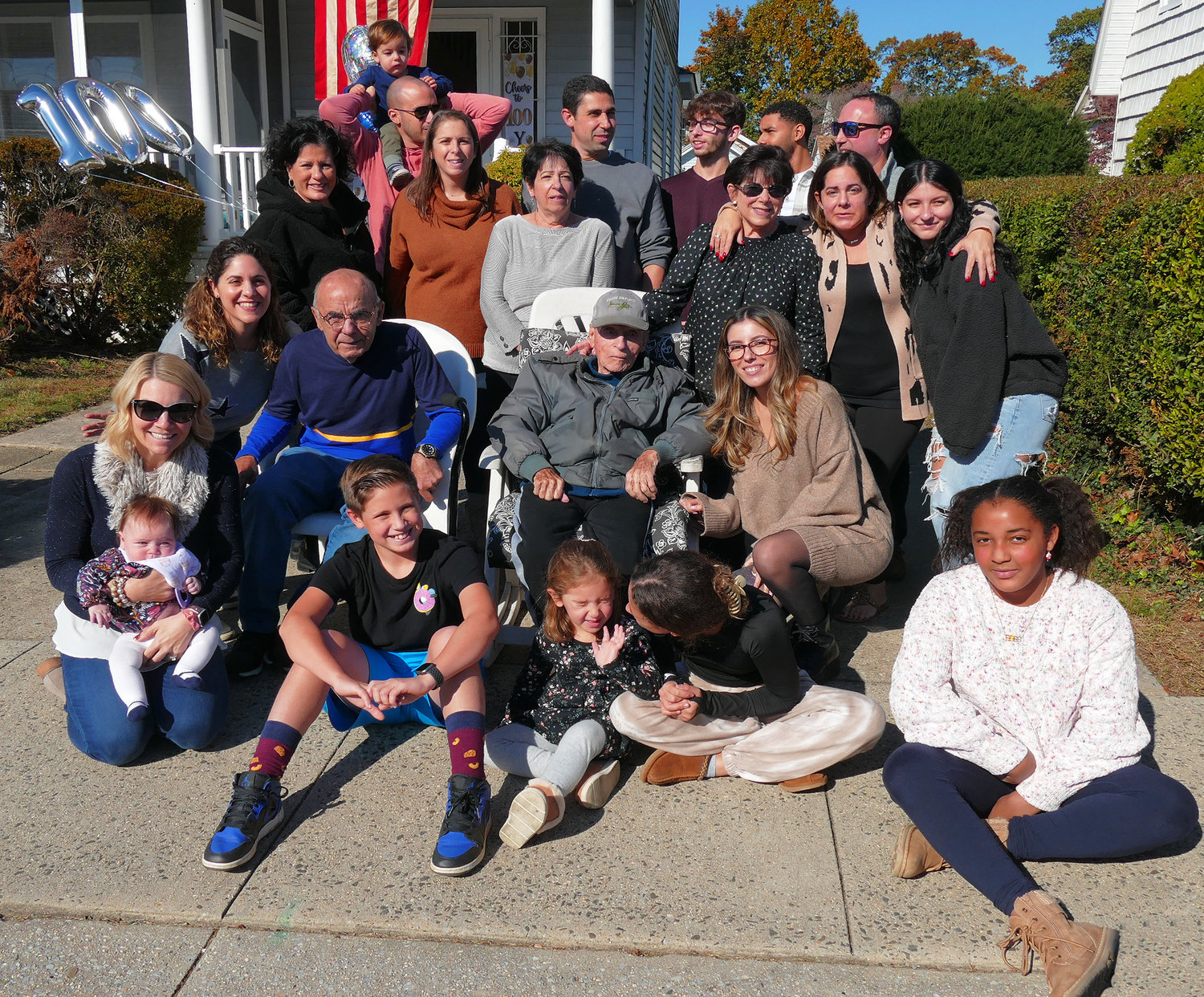 Herbert Rosenberg surrounded by family and friends in front of his home on the Rockville Centre-Oceanside border.
Joe Abate/Herald 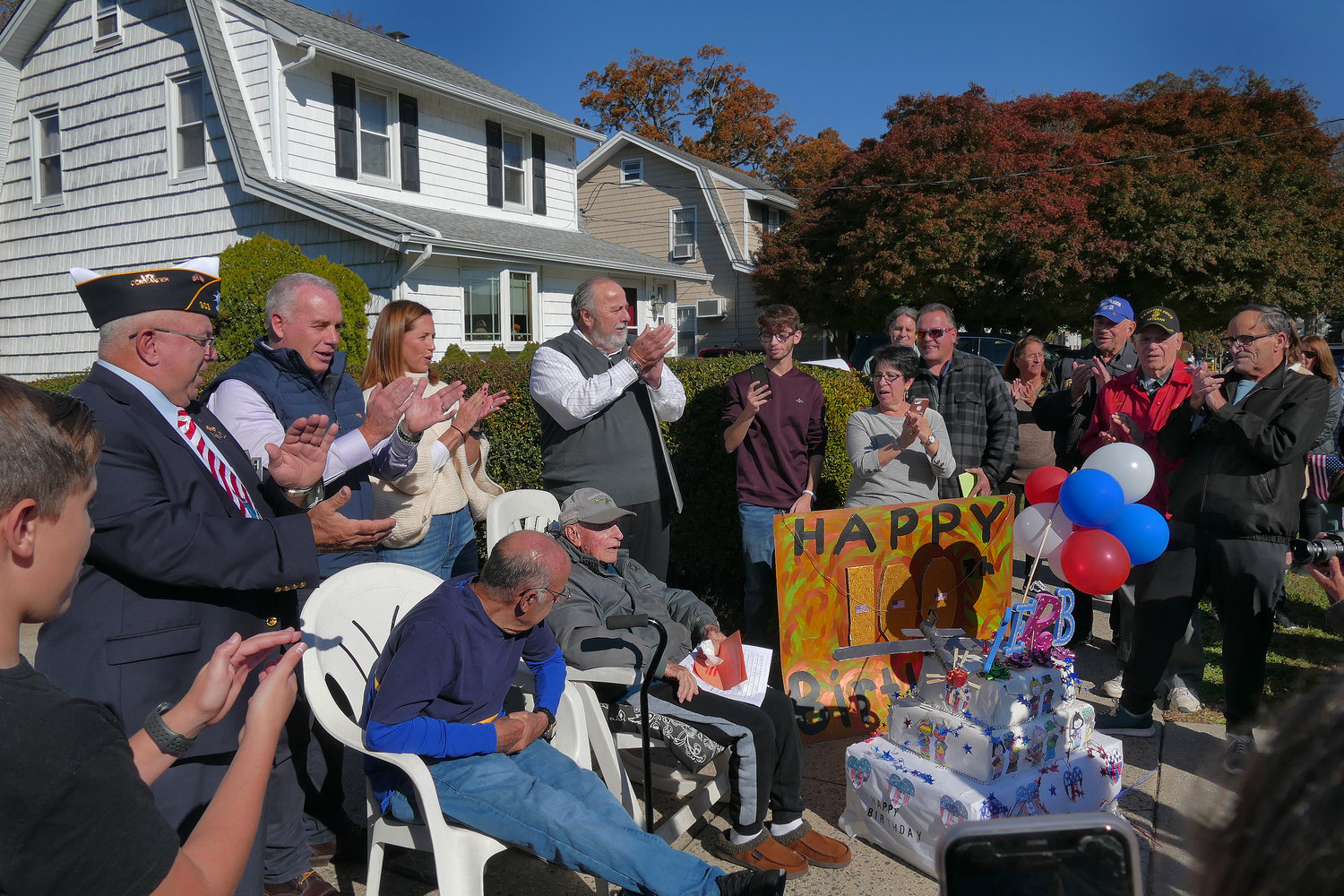 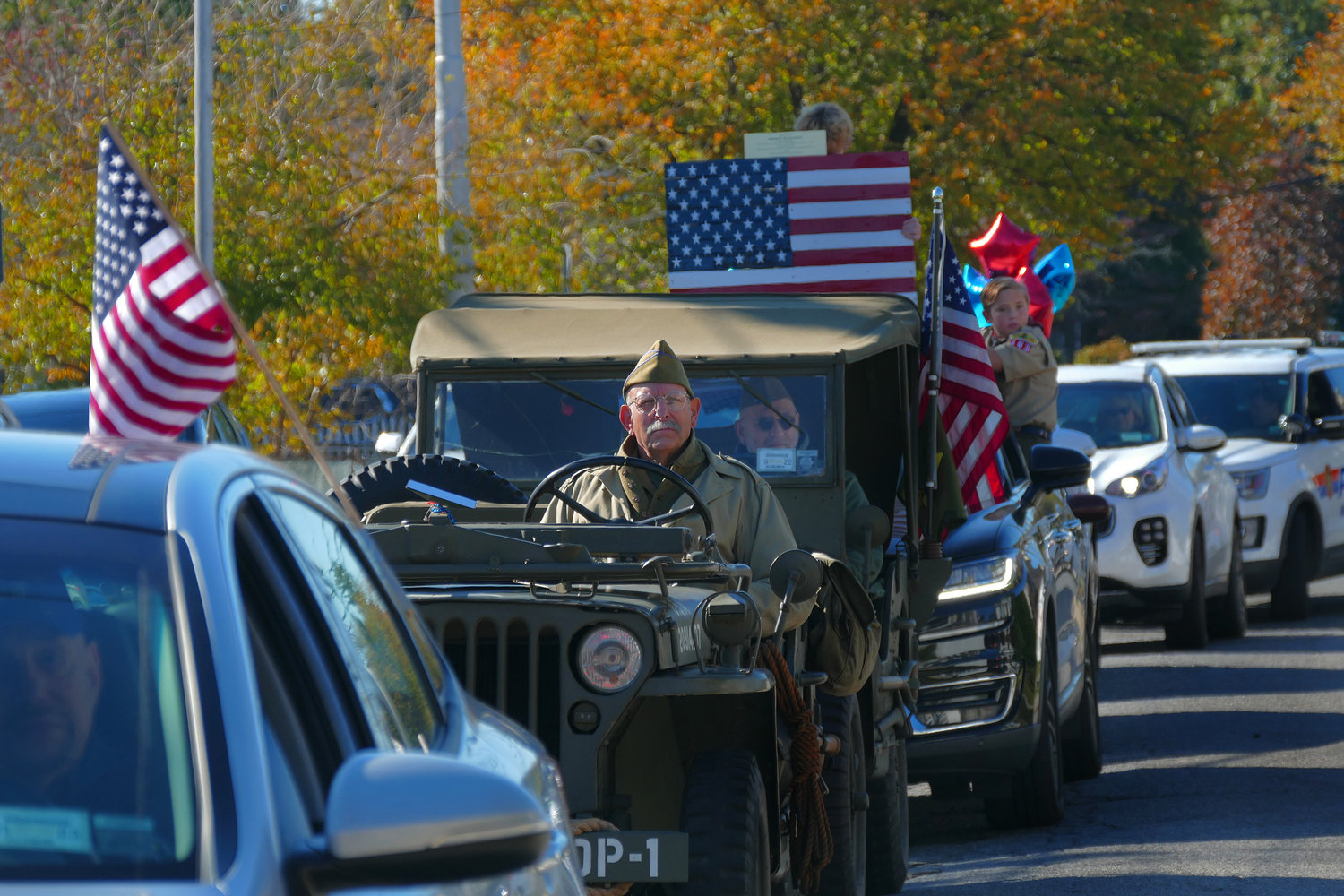 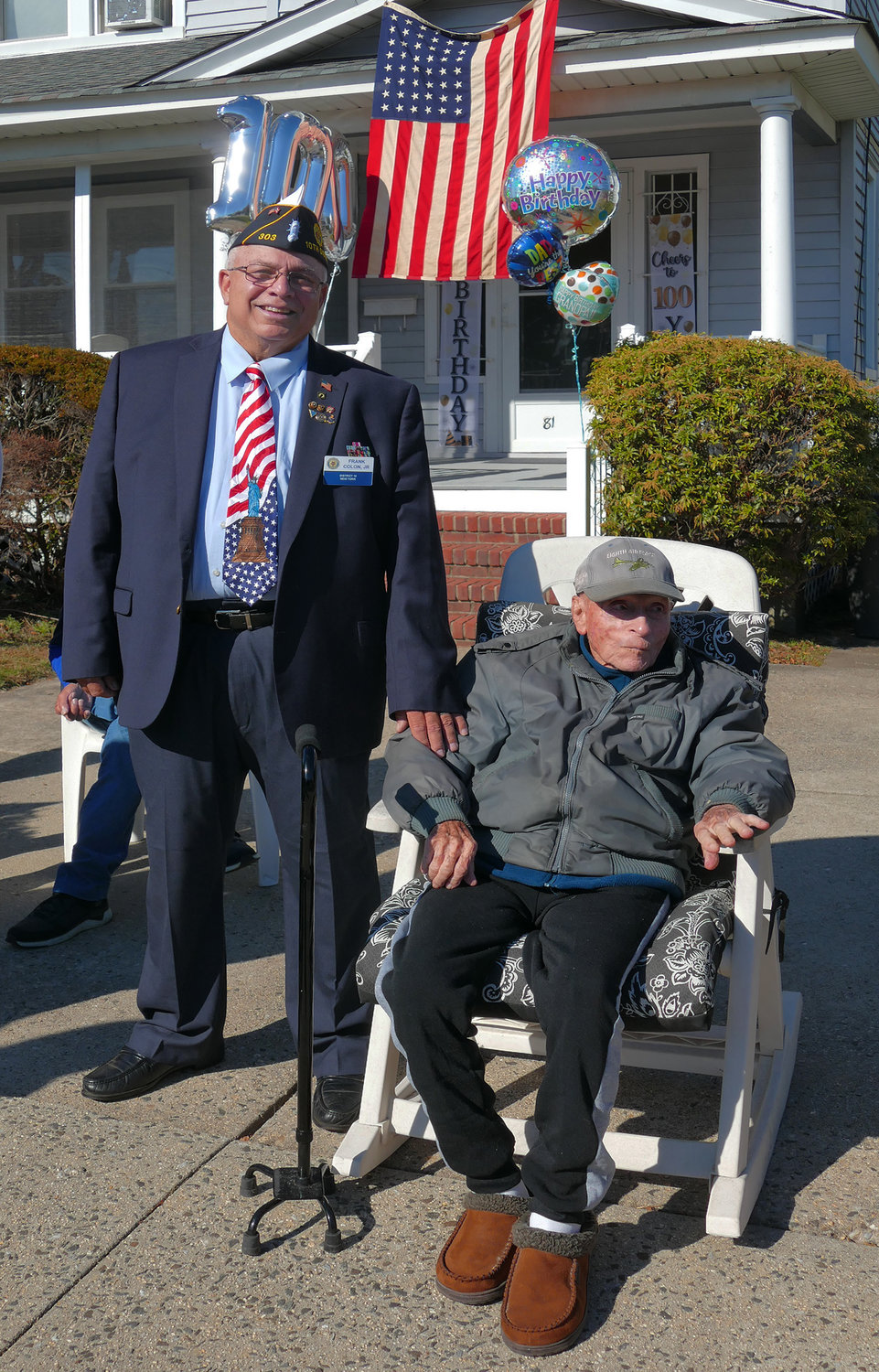 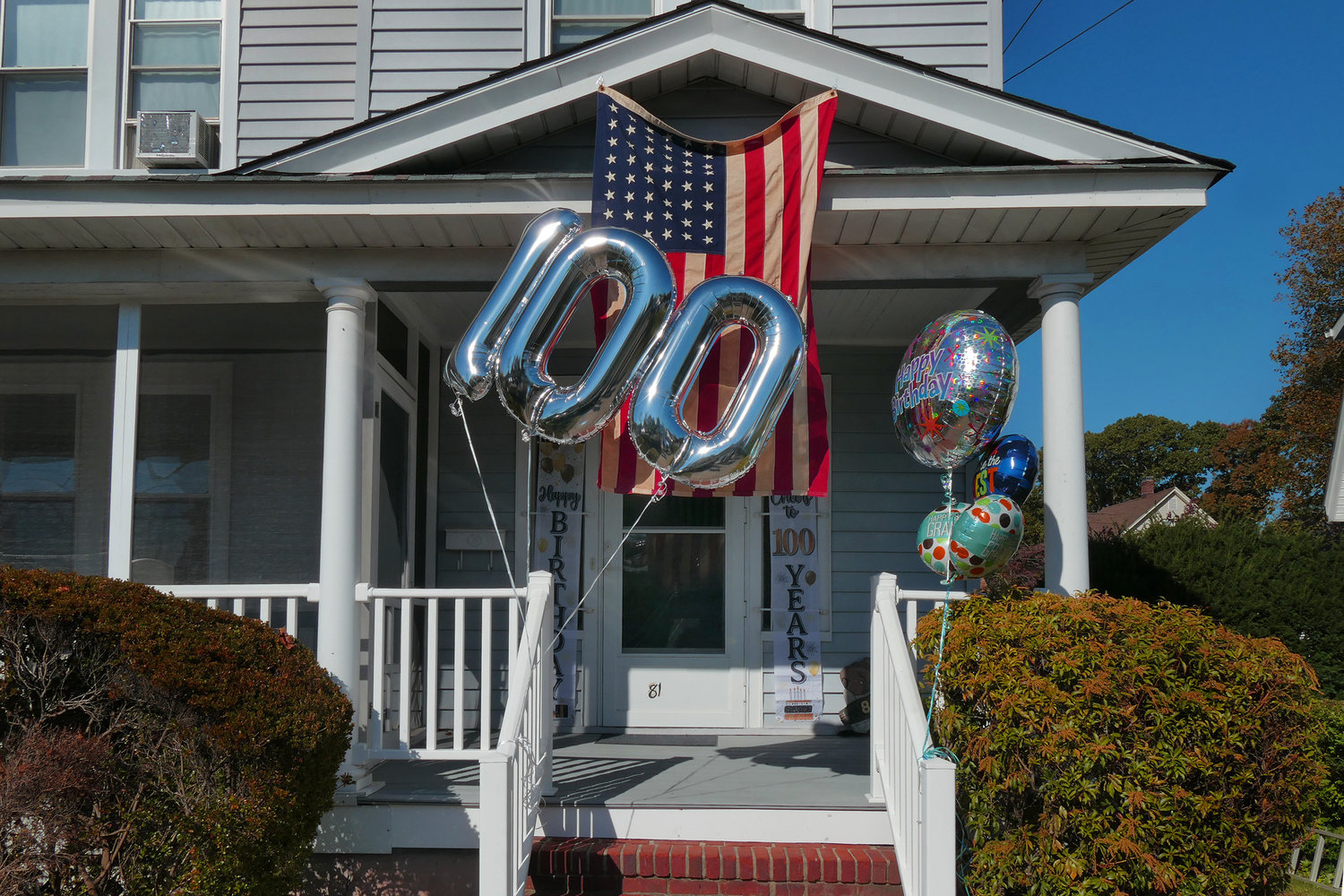 A 48-star American flag flew over Rosenberg’s home during the parade.
Joe Abate/Herald
Previous Next

I'm in tears. I never expected anything like this.”
Herbert Rosenberg, World War II veteran
By Tom Carrozza tcarrozza@liherald.com

Herbert Rosenberg, a World War II veteran and prison camp survivor, was honored during his 100th birthday on Saturday at his Cleveland Avenue home, on the Rockville Centre-Oceanside border, by his family, friends and fellow American Legion post members. The parade saw Rockville Centre firefighters, Nassau County police and veterans drive by his home for a salute to Rosenberg.

Rosenberg was drafted into the Army in 1942 when he was 20, and he worked his way up to the rank of staff sergeant, becoming a right waist gunner on a B-17 bomber. In 1944, Rosenberg’s aircraft “Punchboard,” of the 452nd Bombardment Group, was shot down by German fighters during a mission over Poznan, Poland, and crashed in Nazi-occupied Denmark. The crew were captured immediately and sent to the Stalag Luft 17 prison camp.

During the procession of firetrucks, police cars and motorcycles, Rosenberg teared up. Attendees also sang “God Bless America” and “Happy Birthday” to Rosenberg. A World War II Jeep and truck brought up the rear of the procession.

“It’s very emotional,” Herb’s son Bob Rosenberg said. “For many years growing up, he never spoke about his experiences, and it was only after the past 20 years or so that he opened up about it.”

The Rosenberg extended family celebrated their Thanksgiving dinner after the ceremonies, since it was one of the first times during the pandemic when they could all be together. They were extremely careful around Herb, donning masks in close proximity to him to keep him safe.

Frank Colon, the post commander of Rockville Centre American Legion Post 303, helped organize the event for his neighbor and fellow post member. He also spoke about the many incredible experiences of just listening to Rosenberg’s story. “He’s an inspiration,” Colon said. “He’s like a treasure chest of history of this country, which we need to continue.”

A 48-star flag, hung over the porch of Rosenberg’s house, was originally to be used for a planned parade for the 75th anniversary of the end of World War II, before the pandemic forced it to be canceled. Rosenberg was to be an honoree at that parade.

“I’m in tears,” Rosenberg said. “I never expected anything like this. I hear ‘thank you for your service’ all the time, but being here with family and neighbors, I break down and cry a little bit.”

“We all suffered,” Rosenberg said. “I lost three years of my life in the service and as a prisoner of war, but I’m happy now. I’m here with my friends, neighbors and family, and I can’t ask for more.”

A Queens native, Rosenberg spent 15 months in harsh conditions at the camp before German guards abandoned all prisoners in a forest near the camp, where they were eventually rescued by American soldiers and returned home.

After returning stateside, Rosenberg attended pharmacy school, married his wife, Barbara, and settled in the area in the mid-1950s. He opened a pharmacy in East Rockaway.

In 2016, Rosenberg was awarded a prisoner of war medal from the Department of Defense recognizing his survival in the camp as a Jewish-American soldier.

Rockville Centre Mayor Francis Murray and trustees Katie Conlon and Emilio Grillo presented Rosenberg with a village proclamation thanking him for his service.