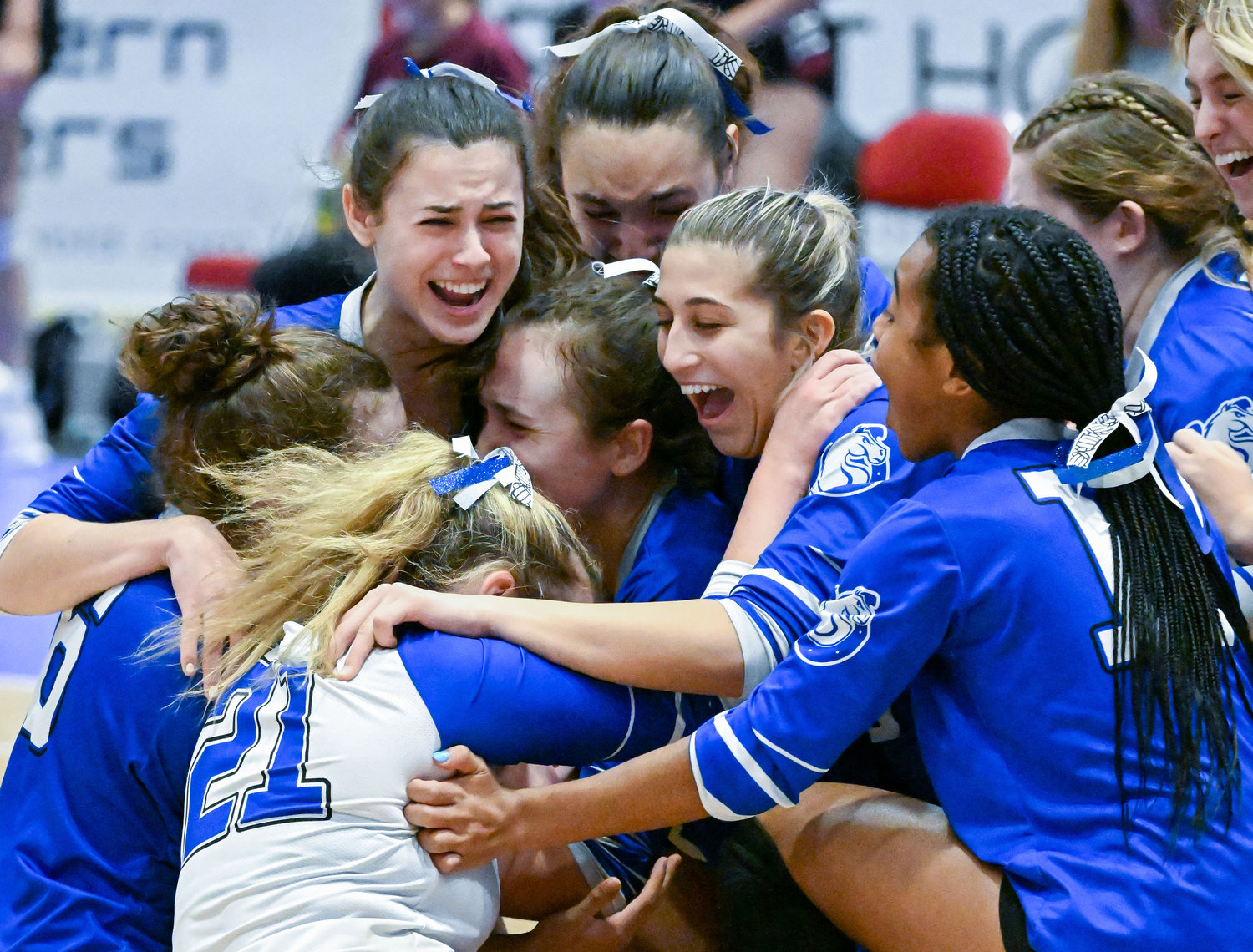 Calhoun left little doubt as to which high school girls’ volleyball team is the best in New York State.

Backed by the inspiring play of senior co-captains Julia Lawrence, Ella Maldonado and Victoria Zovich and key contributions from other players in the rotation, the Colts made good on their preseason mantra of “Road to States”, which coach Christina Strezenec said was put on the team’s white board in response to last season’s Nassau County final loss to Wantagh.

“We knew it was a dream of ours and we knew we could get it, but it was a matter of how far we were going to get,” Strezenec said after the title match. “I’m so happy that that white board message has been with us the past few months.”

During pool play, each of the four Class A teams played the other three in short two-set matches and the schools with the two best cumulative records in those six sets advanced to the final. Calhoun swept Burnt Hills-Ballston Lake in the opener 25-22, 25-21, handing the Spartans their only two losses during the round robin.

“The girls knew the game plan heading in and we had posters with the strategies for each team this entire week and the girls really stuck to that,” Strezenec said

The Colts then swept Cornwall 25-12, 25-22 before splitting with Irondequoit 25-17, 18-25. With a spot in the final already sewn up, Strezenec rested her starters in the last set after a long day of playing.

“We went upstate not knowing what to expect, but I think after Saturday’s pool play we really felt like we could win it,” Lawrence said.

After winning the first set of Sunday’s championship match comfortably, Strezenec recognized that Burnt Hills began to play a little more aggressive in the second and even more so in the third when the Spartans jumped out to a 9-1 lead. But the Colts settled down and took the lead and Grace Miller’s kill at 24-19 iced the championship.

“It's pretty surreal,” Zovich said. “We’ve been working so hard all season. It was hard falling asleep Saturday night knowing what was in front of us Sunday. But we did it.”

Strezenec also lauded the play of setter Olivia Katz, who battled through an ankle injury suffered during the tournament, sophomore Olivia Ruisi, who “rose to the occasion this weekend and outlasted the middies on the other teams”, and junior Amelia Secor, who sparked a lot of runs with her strong serving.

“It hasn’t sunk in yet,” Maldonado said. “To be state champs is so special to all of us. Burnt Hills is a very talented team. Every point was a battle even though the final score didn’t reflect it.”

Calhoun’s road upstate went through Great Neck North, Mepham, defending county champion Wantagh, and South Side in the Nassau Class A playoffs. Then came an impressive sweep of Sayville for the Long Island Class A crown.

The Colts claimed their first-ever county title Nov. 9 with a back-and-forth, four-set victory over top-seeded South Side. Two days later, they added the L.I. championship and punched their ticket upstate with a 25-21, 26-24, 25-19 victory over Sayville.

Calhoun won its first six conference matches as well as two tournaments to open the season before hitting a bump in the road. It lost five of seven matches, including setbacks to eventual playoff opponents Mepham, Wantagh and South Side, before defeating Mineola to go into the postseason on a positive note.

“Winning the last regular-season match was huge,” Maldonado said. “Everything we wanted to accomplish was still in front of us. It really was a dream ride.”