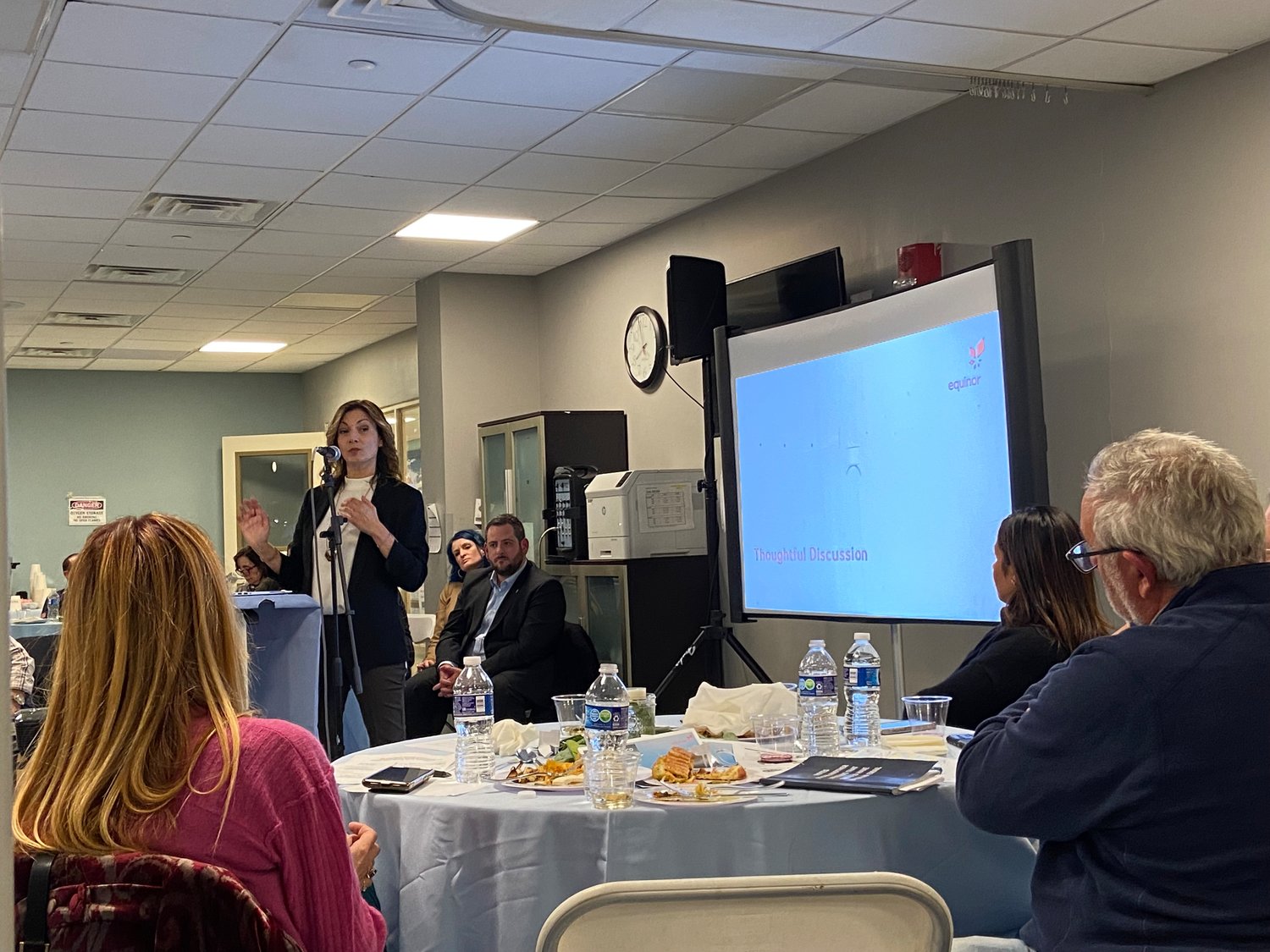 Susan Lienau, Equinor’s community engagement manager for Long Island, led part of the discussion at the company’s presentation to the Chamber of Commerce.
Brendan Carpenter/Herald
By Brendan Carpenter

Equinor, the Norway-based energy company set to build wind turbines in the Atlantic Ocean off Long Beach, is hoping to drum up public support for its project by visiting local organizations and explaining its plans.

On Monday night, Equinor officials appeared before the Long Beach Chamber of Commerce at its monthly meeting, and company representatives said they would make two other local appearances in the coming weeks.

Whether or not they succeeded in convincing people that wind turbines represent the future of energy generation, company officials delivered some news that many who attended the meeting, at the Bay Vista Assisted Living Community, did not like: Energy bills are likely to increase.

In response to a question from the audience, Josh Verleun, Equinor’s director of permitting, said, “Each household’s energy bills should increase slightly. It should be about 95 cents monthly, and approximately $12 a year.”

“It will also include up to 216 nautical miles of inter-array cable, which is the cable between the turbines offshore,” Susan Lienau, Equinor’s community engagement manager for Long Island, explained. “Then there will be up to 66 nautical miles of submarine export cables, which are the cables that bring the power back onto land.”

Lienau said that one of the biggest questions she is asked is, “What is the view from the beach?” Container ships, she said, would frequently pass in front of the turbines, making them less visible from the Long Beach shoreline.

The submarine export cables will run underground, routed beneath the beach and boardwalk at Riverside Boulevard. They will run north, under Lincoln Boulevard, before crossing Long Beach Road when they reach East Harrison Street. There they will follow the path of the Long Island Rail Road tracks up to where Pop’s Seafood Shack and Grill is now, on Railroad Place in Island Park.

This summer was the last for the restaurant. Equinor bought the property. There, a large substation will be built, which the cables will pass through before continuing along the LIRR tracks to the Barrett Power Station.

The attendees at Monday’s meeting asked a number of questions, including the one that had many people curious, if not concerned: How much are energy bills going to be impacted? Many said they were dismayed to find out that those bills will increase, even if, as promised, only slightly.

Equinor officials told them that those increases would make thousands of jobs available.

Harrison Feuer, the company’s New York director of public affairs, said that “every dollar the project spends is an investment of $1.70 into the local economy.” Equinor is partnering with Farmingdale State College to offer training for those interested in working for the company.

“We recognize the opportunity the offshore wind industry has to be more in the community than power into the grid,” Feuer said. “We put a priority on being open and collaborative. We want to do it the right way, with engagement from everybody in the communities where we’re working.”

Equinor will hold two more forums in the coming weeks. The first will be Nov. 29, at Lincoln Orens Middle School in Island Park, and the second will take place at the Long Beach Public Library on Dec. 8.