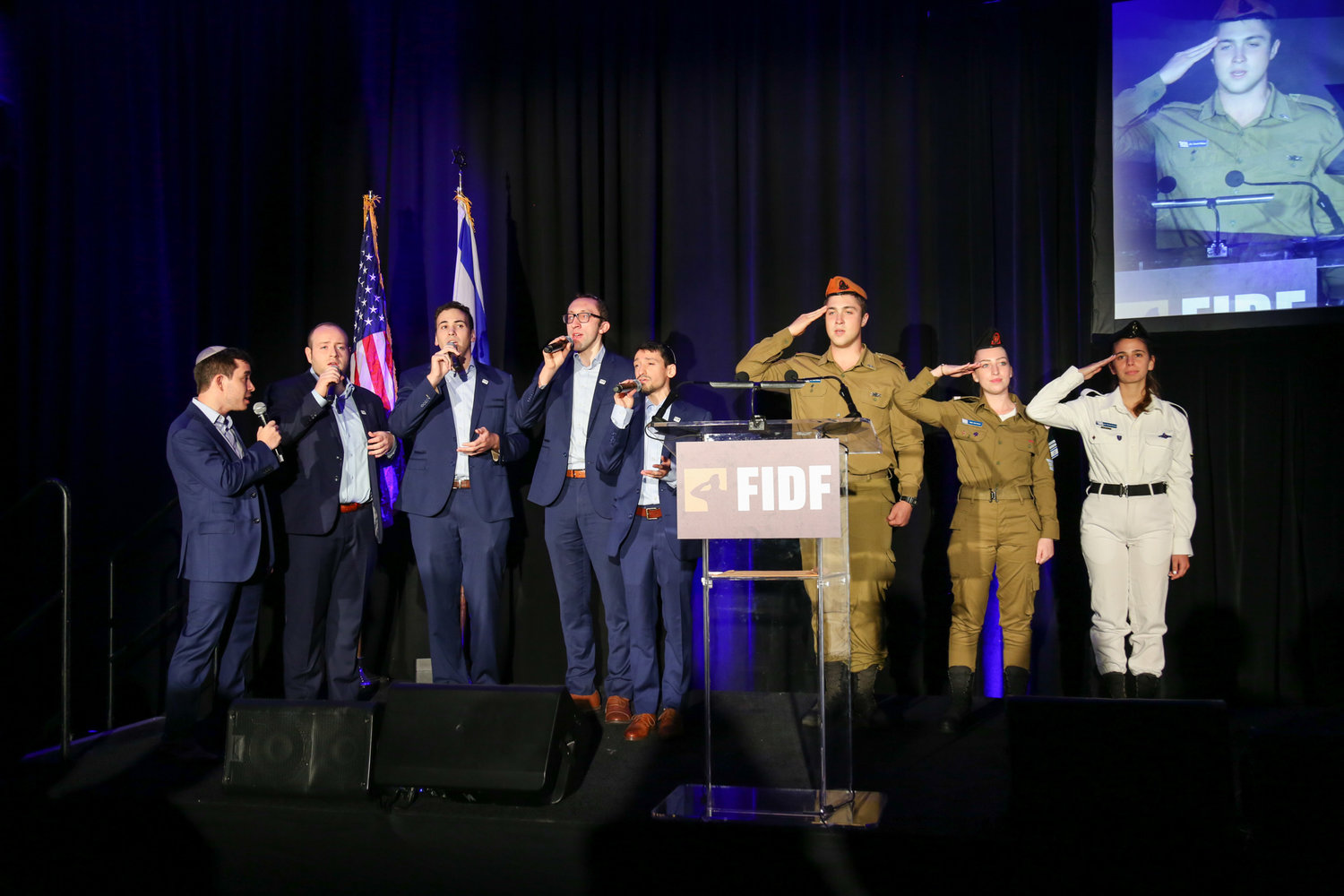 People honored at the gala saluted the crowd in Long Beach.
Courtesy Friends of the IDF
By Brendan Carpenter

At a time when antisemitism is rampant and support for Israel and the IDF is challenged, Friends of the IDF, an organization dedicated to the wellbeing of the soldiers of Israel, brought together members of the Five Towns community in a strong show of solidarity for the brave young men and women of the Israel Defense Forces.

Over 400 local IDF supporters gathered on October 24 for the Five Towns and Greater South Shore 9th Annual Gala at the Sands in Long Beach.

“I’m honored and proud of our parents for their extraordinary leadership and passionate commitment to ensuring a better future for the brave men and women of the Israel Defense Forces, the State of Israel and the entire Jewish community,” said Trudy Stern, a relative of one of the families recognized. “I know I speak for the entire Jewish community in expressing my thanks to FIDF for the incredible work that they do and opportunities they provide. Without a strong IDF, there is no Israel and there is no organization better equipped to meet the social, educational and wellbeing needs of Israel’s heroes.”

Guests heard from three active-duty IDF soldiers. Sergeant Shachar, a naval combat sailor in the IDF’s 3rd Flotilla spoke about her experience as part of the team that used the anti-missile system on the INS Eilat for the first time. While on a patrol sailing, Shachar’s team successfully intercepted two drones sent by the Hezbollah terror organization in an attempt to damage one of Israel’s gas rigs. She was proud to play a part in this difficult task. In addition, Shachar spoke to the value of the support she and her unit receives from FIDF. “You make us all feel so appreciated.”

Another Soldier, Staff Sgt. Alisa spoke about her time in the elite Paramedic Unit in the IDF and what FIDF’s support means to her. “It is not taken for granted that so many people from across the globe care. I feel so lucky to be able to defend and represent the incredible values of the one State of Israel.”

Lastly, FIDF CEO Steve Weil took the stage and praised the evening’s honorees. “Tonight, a story of courage with Staff Sgt. Alisa and 2nd Lt. Yosef showed us the importance of putting purpose over our comfort zone. And we’ve seen how the culture of courage that FIDF supports enables a soldier like Sgt. Shachar to save a nation under threat. This is the Jewish people. This is the compound effect of courage.”