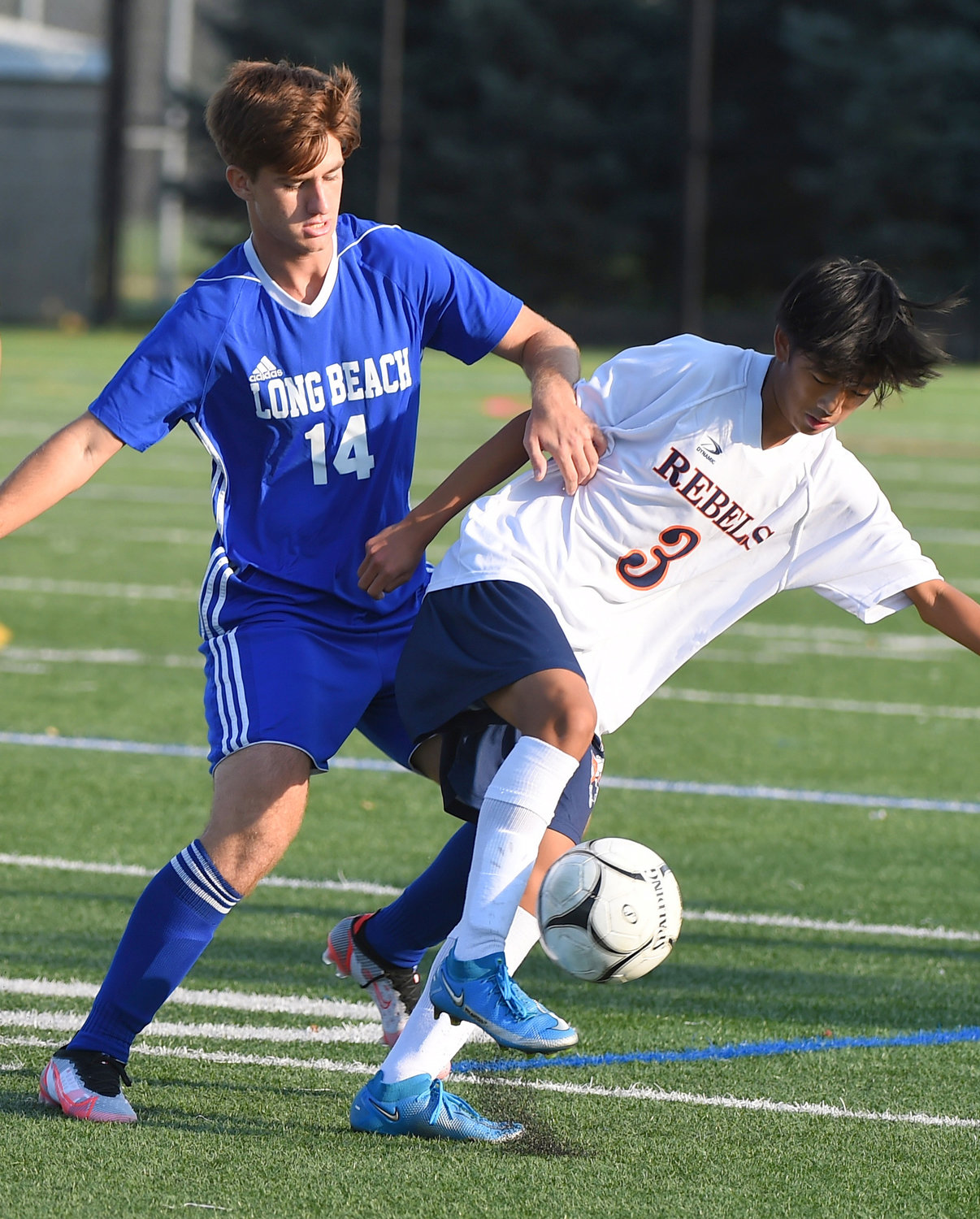 Long Beach junior Ryder Moore, left, is a defensive-minded midfielder and one of many returning starters for coach Leo Palacio.
Donovan Berthoud/Herald
By Tony Bellissimo

Long Beach coach Leo Palacio is looking for the Marines to pick up where they left off last spring when they peaked down the stretch and reached the second round of the Nassau Class A boys’ soccer playoffs.
“We went undefeated in our conference but had some trouble in the crossover games,” Palacio said. “We were playing some nice ball going into the playoffs and beat Seaford in the first round. Garden City knocked us out 3-0, but they beat us 6-1 during the regular season so we really showed progress.”
Now in Conference A-1 along with Great Neck South, Great Neck North, Jericho, MacArthur, Mepham and New Hyde Park, the Marines boast the largest senior class Palacio has ever coached. “They’re a few months older and more experienced,” he said. “The conference is very tough, but I told the kids I’ve still got high expectations.”
Palacio said defense is the key to success and Long Beach plenty of proven commodities, including Honorable Mention All-County sweeper Anthony Camas. A senior who is calm under pressure, Camas anticipates well, moves the ball out of the zone and also handles free kicks. “We ask him to do a lot and we need him to stay healthy,” Palacio said.
Other integral pieces of the defense also return. Senior Jaden Bloom, an outside back, will get any one-on-one marking assignment when the situation calls, Palacio noted. “Jaden is great one-on-one and also has speed and reads the game well,” the coach explained. Junior stopper Michael Contreras is a strong on-ball tackler and covers a lot of ground in the back, cleaning up any mistakes that arise. Senior Daniel Cipra’s left-footed crossing passes rank among the best of anyone on the team, Palacio said, and has excellent field awareness and the ability to contribute in the midfield.


Between the pipes, junior goalkeeper Avie Mann enjoyed a strong ending to last season and earned All-Conference honors. “He’s vocal and confident,” Palacio said. “In the conference we’re in, you need a strong goalie to compete.”
Having senior Liam Sagy on the field for every game would provide a huge boost, Palacio said. An impact player with a high-level skill set, Sagy, who appeared in about half of the games last season, can dictate much of a game’s flow as a facilitator at center-midfield. “He can dictate how we transition into offense because he has great vision and distributes so well,” said Palacio, who added junior Ryder Moore is a consistent defensive-minded middie who provides balance.
On the outside, junior Aran Corbett is coming off an All-Conference campaign that saw him lead the Marines in scoring. “He hustles all over and contributes at both ends,” said Palacio, who is also counting on junior Jesus De Los Santos and sophomore Ryan O’Campo to make bigger contributions.
Up front, senior Arthur Quezada enters his fourth varsity season and has the ability to put the ball in the net and set up teammates as he did four times last season. Senior Ryan Kalv and junior Yeris Miranda both provided sparks off the bench and are in line for larger roles.