Hundreds turn out for Fall Festival 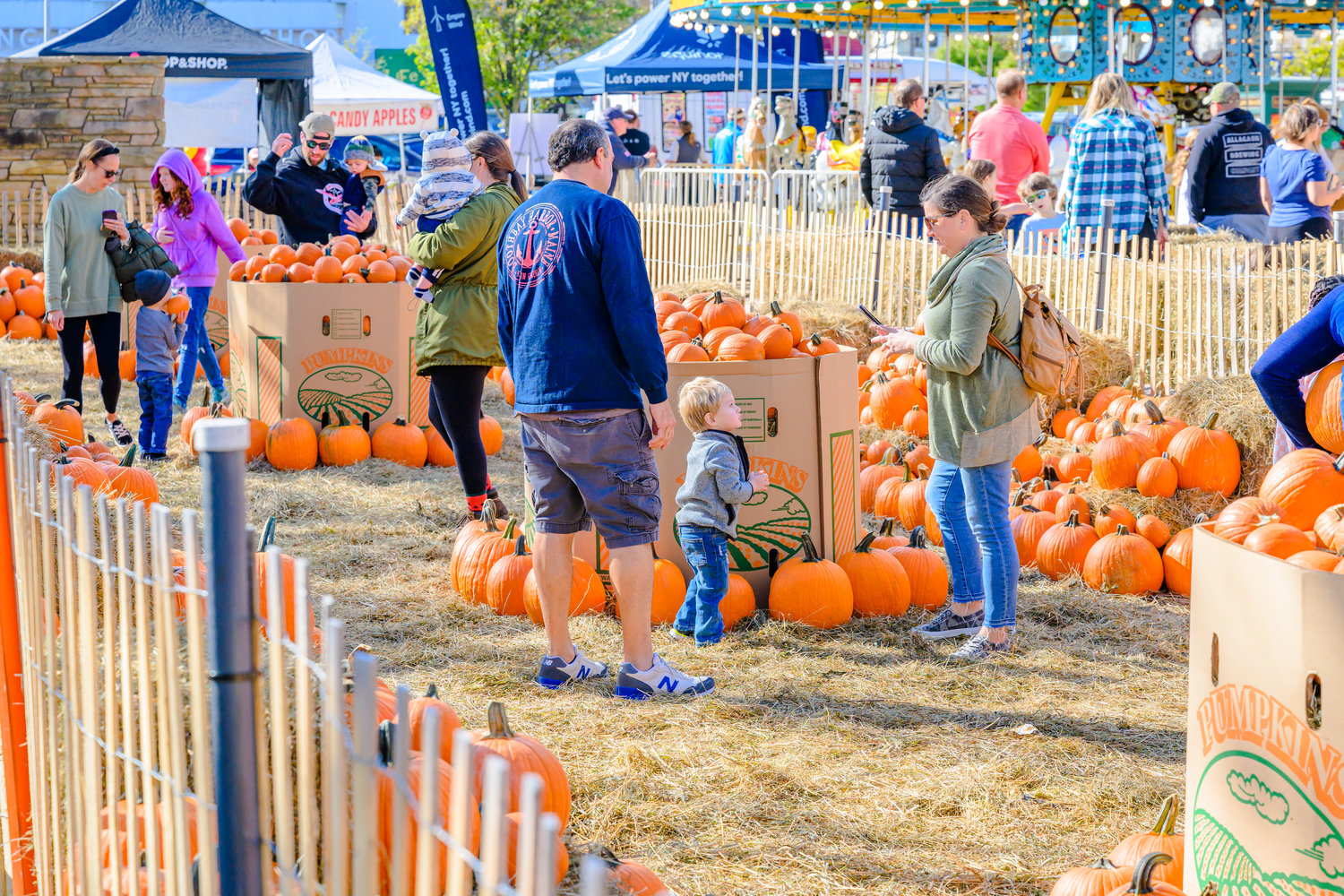 Pumpkin pickers had their choice at the Festival, which featured food, photograph, trinkets and wine and beer for the older set.
Bob Arkow/Herald

A large group of Festival attendees lined up to show off their outfits for the day they had been waiting for since the pandemic.
Bob Arkow/Herald
Previous Next
By James Bernstein

Not only was fall in the air in Long Beach this past weekend, but it was also on the ground at Kennedy Plaza outside City Hall, and it was in the pumpkin patch, and the Ferris wheel and the carousel and the food and trinket booths.

It was Long Beach’s Fall Festival, which returned after a two-year hiatus because of the coronavirus pandemic. There were masks here and here, but there was more of a relaxed and casual feeling among the hundreds who attended the Saturday and Sunday events and the Halloween Parade.

Judging by the hundreds of pumpkins in a large pit in the middle of the Plaza, and the masks and costumes many of the children were wearing, it was certainly fall.

The Festival brought out members of the Long Beach City Council, as well as candidates for political office. Vicky Shaw, the administrator of the Park Avenue Extended Care facility, across the street from the Plaza, had he 10-year-old son, Chase, in hand.

“We’re here to support the city and all of the kids who turn out,” Shaw said.

Chase agreed: “It’s nice to see everyone out and about,” he said.

Mike Jordan, president of the Long Beach Kiwanis, used to occasion to drum up new members. He wasn’t signing up too many people., but he was glad to see the growing crowds as the day wore on.

“Look at all the vendors you’ve got here” Jordan said. “You can do your Christmas shopping here. You can get ready for Thanksgiving.”  Indeed, there were apple and cherry pies for sale.

Liz Nachman, the Herald’s Person of the Year last year, was selling tee shirts. She spends much of her time raising money for the homeless and those suffering from food insecurity.

For us vendors, we’ve got a lot of parents shopping for their kids. This is our first year back in two years. “It’s so nice to see people back out and having a good time.”

There was a serious side to all this too. The city hopes to at least break even on the Festival, instead of losing money. As such, Long Beach asked Equinor to be a prime sponsor. The international energy firm hopes to play a large role in the city’s future.

The construction of its proposed Empire Wind, a $3 billion wind farm project that includes plans to run an underground cable through Long Beach to a substation near the E.F. Barrett Power Station in Island Park, is still pending approval. A Jack-Up Barge was built and began operating in the ocean off Lido Beach in January, taking samples of the soil underwater to test its strength, in order to determine the best location for the cable to run under the barrier island.

Equinor had a booth, manned by employees Susan Lienau and Brian Young.

“We’re here to support the community,” Lienau said, while handing out free Equinor tee shirts and other trinkets. She said visitors to the booth seemed to favor the project, but some had questions about where the company will place the underground cable.

“Equinor wants to thank the City of Long Beach for welcoming us to be part of this year’s festival,” said Harrison Feuer, the company’s New York director of public affairs, said last week. “I also want to recognize that the city is celebrating its 100th year and 24th year of this festival. So we’re in a special place during a very special time.”

The construction of the wind farm is far off. Just over a year ago, the federal Bureau of Ocean Energy Management began its studies of the construction and operation of the project, which is expected to take about two years, and it would need approval from New York State as well. Work on Empire Wind would begin no sooner than 2025.

The festival’s highlights included a pumpkin patch filled with thousands of gourds for families to choose from. A pumpkin bounce house, a carousel, hayrides and rides in fire engines will also return after the pandemic hiatus, as will the children’s activity tent, with fall-themed crafts. There will also be Long Beach centennial-themed attractions.

But the day was all about fun. Five-year-old Michael Sosa could barely wait to get into the red bounce house. His mom, Sydney Sosa, a former U.S. Marine who recently transferred to serve in the Army, said she came from their home in Island Park.

“I wanted to spend more time with him,” she said of her son, who was hungering for a hot dog.