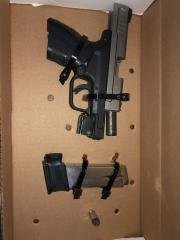 The loaded Springfield XD .40 caliber gun that was allegedly found in a vehicle at a North Lawrence business on Nov. 20.
Courtesy NCPD
By Jeff Bessen

An Inwood resident was found to have a loaded handgun at a North Lawrence business on Nov. 20, according to police.

Nassau County police responded to a call that a person had a gun at Five Towns Car Wash on Rockaway Turnpike at 2:49 p.m. During the subsequent investigation police said they recovered a loaded Springfield XD .40 caliber gun between the driver’s seat and the center console of the vehicle being driven by Brandon P. Millington, 24, of Yale Street.