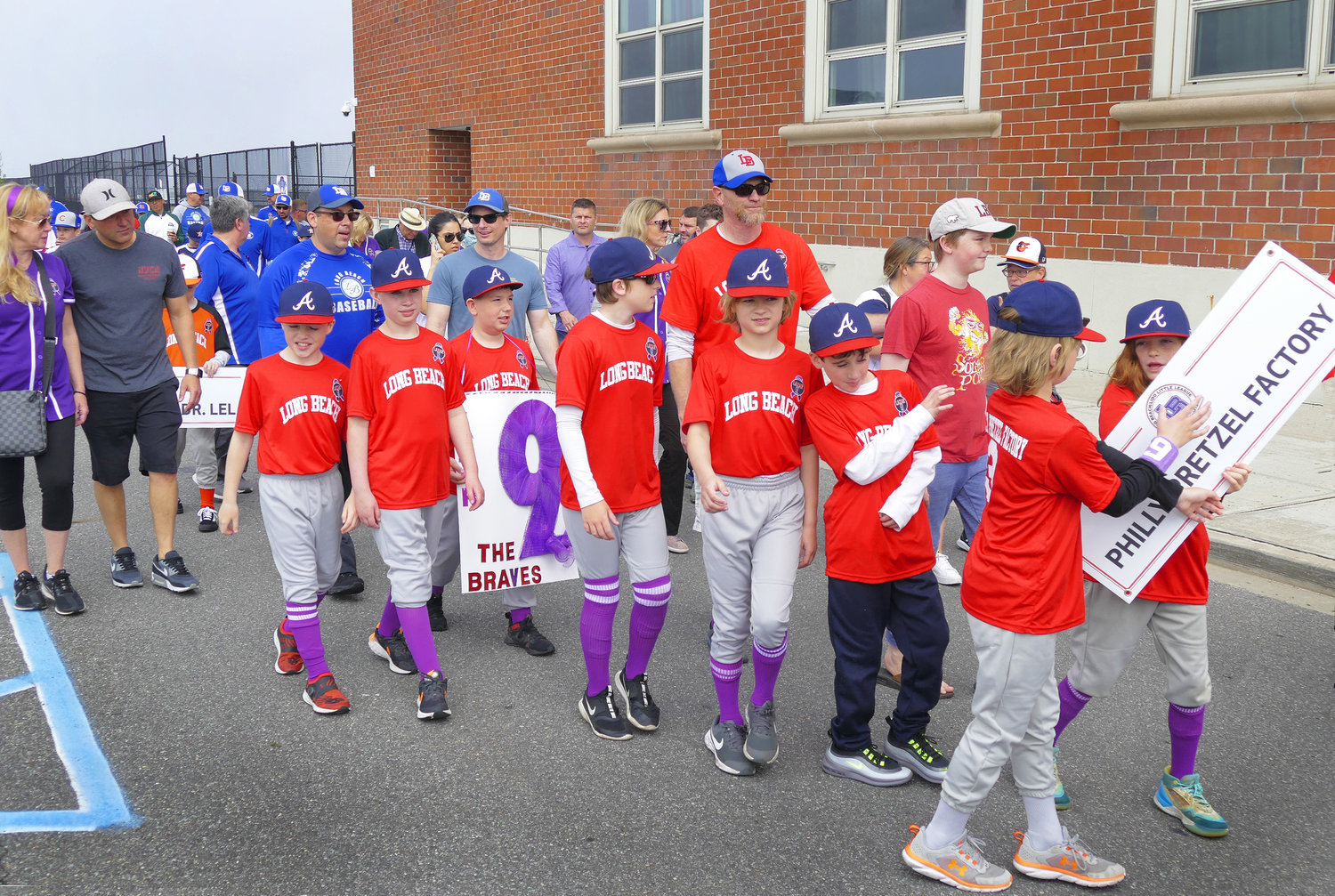 Lazar LaPenna’s teammates from the Braves paid tribute to the young man who loved the game.
Joe Abate/Herald
By James Bernstein and Brendan Carpenter

Little League parades are usually an ordinary ritual filled with happy chatter about the upcoming baseball season. But the parade in Long Beach last Sunday morning was anything but usual.

The Long Beach/Lido Little League parade honored the memory of Lazar LaPenna, who died April 29, two days after his 10th birthday, when he collapsed on the field, the result of what was believed to be an epileptic seizure. An ambulance was called, but he died a short time later.

About 500 people — Little Leaguers, parents and other adults — gathered outside Lindell Elementary School shortly before 10 a.m. to remember Lazar, who this season would have been a member of the Braves, one of the teams in the league. The air was gloomy and foggy on the somber day, almost as if on purpose.

The Little League was scheduled to hold its annual parade April 30, but postponed it after Lazar’s death. League officials said that the remainder of the season would be dedicated to him.

All of the players wore a blue patch on their uniforms with Lazar’s name emblazoned on it. There were posters around the Lindell school, also displaying his name.

He was widely described as a young man who loved baseball, whether playing the game or talking about it. He loved spending time outdoors, and he also loved Legos.

“He liked playing a lot of sports,” said Logan Wien, 11 a friend of Lazar’s since both were 2 years old. “He was always excited about the games. He always talked about sports.”

Mavis Fox, 9, played sports with Lazar growing up. She has played baseball for the past three years, and has known him every step of the way.

“I’m excited for this year’s parade,” Mavis said just before the march began. “I think it was the right choice to make this one for Lazar.”

State Sen. Todd Kaminsky, of Long Beach, was among the parents at the march. His 7-year-old son, Rafe, plays for the Astros.

“Long Beach always pulls together when the chips are down,” Kaminsky said. “We’re all feeling the loss. We think being together today, at the baseball field, is the way to go. This is the way we’re coping.”

Kaminsky said of his son, “He knows there was a tragedy, He knows the community cares.”

Jennifer Ragona, a Little League parent, was also marching. “He was full of life,” she said of Lazar. “And he was funny.”

Brody Butt, 8, has played in the Little League for three years. He and his father, Richard, shared their enthusiasm and excitement for the parade. This year, however, they knew it meant something different.

“I think the parade is a great tradition,” Richard said. “Especially this year, it’s great to have everyone and all teams come together.”

Beryle Jackowitz has two sons — Jonah, 7, and Abe, 9 — in Little League. She said that Abe understood what had happened. “He knows he’s not with us anymore, and that’s sad,” she said. “But he also knows it’s important to honor him, by wearing the patches.”

“He was a beautiful boy,” said Mary O’Connell, who walking with the crowd to the Long Beach Recreation Center, about five blocks from the elementary school.

Lazar had been playing baseball since he was 5. On the day he died, he was playing at a field in Lido.

He had just smacked a single, and was rounding first base when he suddenly collapsed. His older brother, Jerry, was coaching at first base and was cheering Lazar on, along with the rest of the crowd.

Lazar had a big smile on his face before he fell.

His father, Gregg LaPenna, a Long Beach restaurant owner, has said that Lazar had been diagnosed with epilepsy at a young age, but the disorder never stopped him from playing the game he loved.

A few days after his son’s death, LaPenna said, “I’m holding the scorebook as he looks at me with the biggest smile.  I look down at the book to mark his single. That’s when my family’s life changed.”

At Lazar’s school, students wore blue to honor his memory.

Tributes came in from Long Beach city officials, Little League programs across the country, players in other parts of Nassau County and even from the New York Mets, the team he loved more than anything.

“We send our love and support to his family and teammates in the Long Beach/Lido League,” the Mets organization wrote in a social media post.