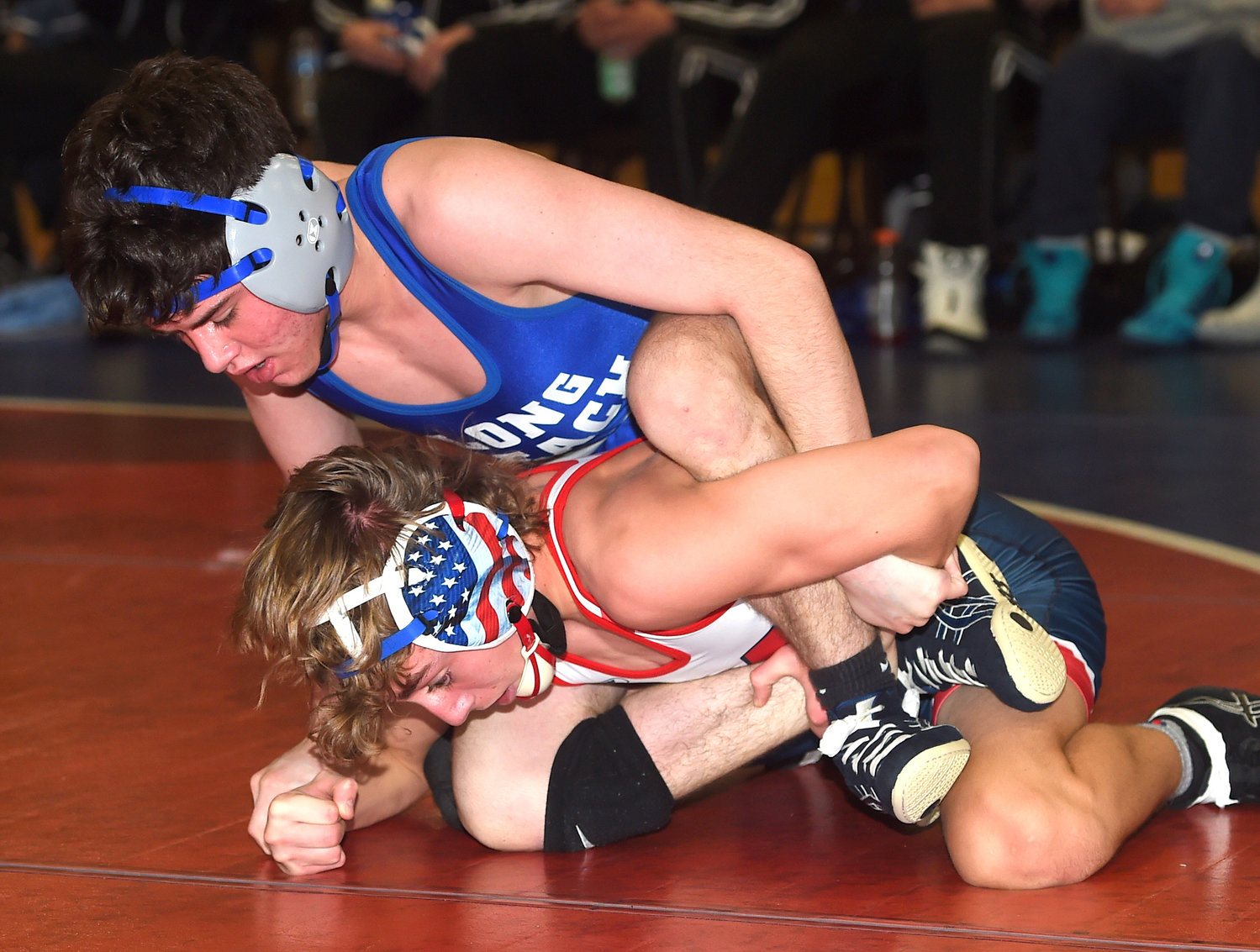 Senior Mason Franklin, top, won each of his 110-pound bouts on Jan. 20 to help the Marines defeat Division and Calhoun in the dual meet playoffs.
Donovan Berthoud/Herald
By Tony Bellissimo

The battle for the Nassau Conference 2B wrestling title came down to a showdown between Long Beach and MacArthur on Jan. 11 and was deadlocked heading into the final weight class.
A pin in the second period by MacArthur’s 285-pounder Matthew Clarkson gave the Generals a 32-26 victory and the crown, but the Marines, down three starters, left it all on the mat, coach Ray Adams said.
“MacArthur is very strong in the upper weights and we left some points all over the board,” Adams said. “I’m proud of how every kid battled and they responded to the loss to win two playoff matches.”
Long Beach won 6 of 13 bouts against MacArthur and built a 26-17 lead before dropping each of the final three scraps. Eighth-grader Dunia Sibomana and senior Mason Franklin got things going early with a pin and major decision, respectively, at 102 and 110. Both will go at 102 in the county qualifier tournament hosted by the Marines next weekend.
“They’re both having big seasons,” Adams said. “Mason hasn’t lost to anyone at 102 and Dunia’s only two losses are to Mason. They’re both capable of going very far in the county tournament.”


After MacArthur’s Jonathon Fox took the 118-pound tilt, Long Beach rebounded with two more victories as Michael Berube won a tough 12-8 decision at 126 and Greg Milone dominated at 132. Adams bumped county title contender at 126, Wyatt Parker, up several weights where he fell to Generals’ standout and D1 recruit Killian Foy at 138.
Yehuda Bitton (160) and Luke Anfossi (172) both won major decisions to put the pressure on MacArthur.
“It was a great high school wrestling match,” Adams said. “Of course, we would’ve liked to finish it off. But we have to give credit where credit is due.”
The Marines returned to action nine days later and defeated Division, 47-12, and Calhoun, 39-24, in the dual meet playoffs. The Calhoun match began at 152 and Davila Oscar delivered a major decision win to get Long Beach out of the gate in positive fashion. After losing the next three, John Miller (215) and Ben Shapiro (285) had momentum-altering wins.
“Miller got a late pin and it really ignited us,” Adams said. “Then Shapiro followed with an upset win in overtime and kept everyone fired up.”
Eight other teams — Hewlett, Freeport, Oceanside, South Side, Roslyn, Valley Stream North, Lawrence and Hempstead — will head to Long Beach on Feb. 5 for one of Nassau’s five qualifier tournaments. Adams says he’s hopeful at least 15 Marines advance to the county’s big stage Feb. 12-13 at Nassau Community College. The top five finishers in each weight class in each qualifier will move on.
“It’s going to be a competitive qualifier,” Adams said. “That’s how they’re set up to be.”
In the latest rankings, posted Jan. 16, Parker is No. 2 behind Hewlett’s Ariel Waldmann, Franklin and Sibomana are third and fourth at 102, and Hector Morrobel is sixth at 152.