Released from hospital after three days 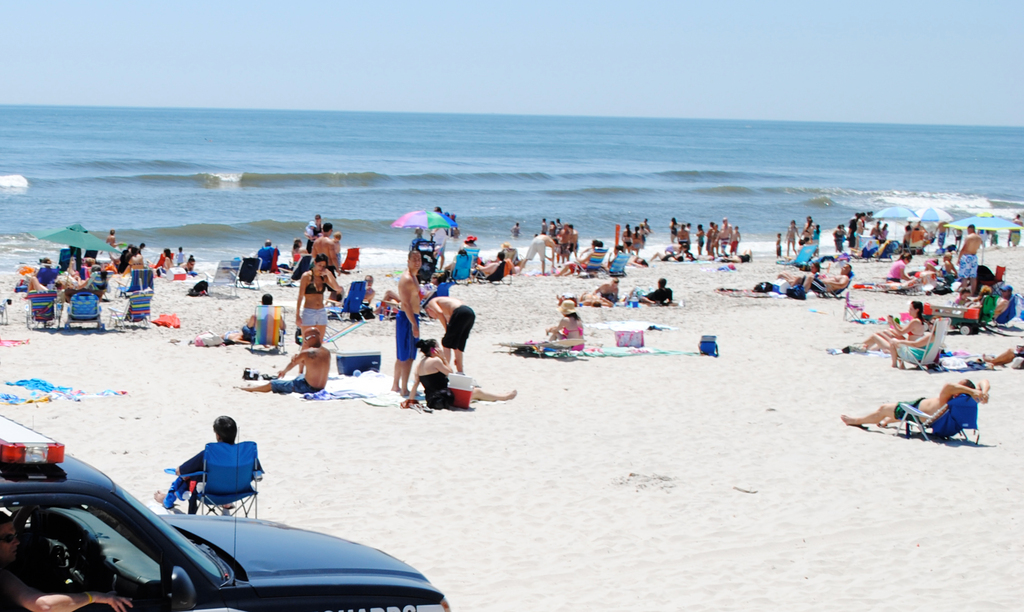 sunbathers enjoy the beach at Monroe Boulevard on Sunday, four days after a Long Beach police SUV ran over an Oceanside man in a lounge chair on the beach. The man was brought to Nassau County University Medical Center. He was released on Saturday.
Alyson Goodman
JOSEPH KELLARD, TONY RIFILATO AND ARIELLA MONTI

Orange traffic cones were lined up to create clearly demarcated driving lanes on the beach over the Memorial Day weekend after a sunbathing man was run over by a Long Beach Police Department SUV on May 26. The officer who was driving the vehicle was responding to calls to help a distressed swimmer.

The incident occurred near Laurelton Boulevard at 12:11 p.m. last Wednesday, when the SUV driver, officer Paul DeMarco, was patrolling the beach. DeMarco saw and heard people calling and waving at him to alert him to a female swimmer who was in distress by the jetties, according to Detective Lt. Kevin Smith, a spokesman for the Nassau County Police Department, which took over the investigation.

"He looked in their direction and made a sweeping U-turn, and lost sight of the ground in front of him and struck the sunbather," Smith said.

Police said that DeMarco — who has been on the Long Beach force for 27 years — made a visual check in all directions before turning his Dodge Durango, but did not see Marshall Starkman, 43, an Oceanside man on a low-lying lounge chair.

Starkman was struck by the SUV's right tires and sustained fractures to his neck and ribs. "My understanding is that the officer —who is a very seasoned, well-respected police officer— was on the beach patrolling, and he had stopped to speak with someone," City Manager Charles Theofan said. "He was called away to respond and, unfortunately, he was making a very sharp right to go back east and did not see this gentleman. He didn't even realize it until he heard people yelling and of course stopped."

Starkman was transported by helicopter to Nassau University Medical Center, where he was listed in serious but stable condition. Theofan said that he may have suffered a broken spine. On Tuesday, an NUMC spokeswoman said that Starkman was discharged on May 27, but she was not authorized to say whether he was transported to another hospital or taken home. His family declined to comment.

Neighbors described Starkman as a "clean cut," friendly man who shares his Oceanside home with his mother. "I think they're lovely people and lovely neighbors," said Beverly Seidman, who lives on the same street as Starkman. "As soon as I heard about it, I ran across the street, and I don't have to tell you how awful [his mother] feels. We're all shaken and very upset."

Smith said that when DeMarco responded to the shouts and waves, he was not in emergency mode, meaning he did not have his flashing lights and siren on. But, Smith added, after police interviewed witnesses on the beach as well as DeMarco and Starkman, the incident was deemed an accident.

"You look to see if there was any criminality just to cover all your bases, but it doesn't look as if the officer did anything wrong other than not see this bather, so there was no criminal negligence or recklessness," Smith said.

The accident occurred on a particularly busy preseason day on the beach, when temperatures climbed to nearly 90 degrees and a number of swimmers were overwhelmed by the rough, cold ocean water."

[The officer] had gotten a call for one of the water rescues, which is why he was pulling away quickly," Theofan said. "There is clearly nothing here to indicate more than a tragic accident."

Theofan said that similar incidents have happened in the past. "We have had people in the past that have been run over by our garbage trucks, and some got no injuries at all because they just get pressed way into the sand," he said.

Paul Gillespie, the chief of Long Beach lifeguards, recalled that the last time someone was hit and killed by a vehicle on the beach was 15 to 20 years ago, when a bulldozer ran over a man on a West End beach.

Stanton’s World of Legos inspires many

Experts weigh in on shortage of baby formula