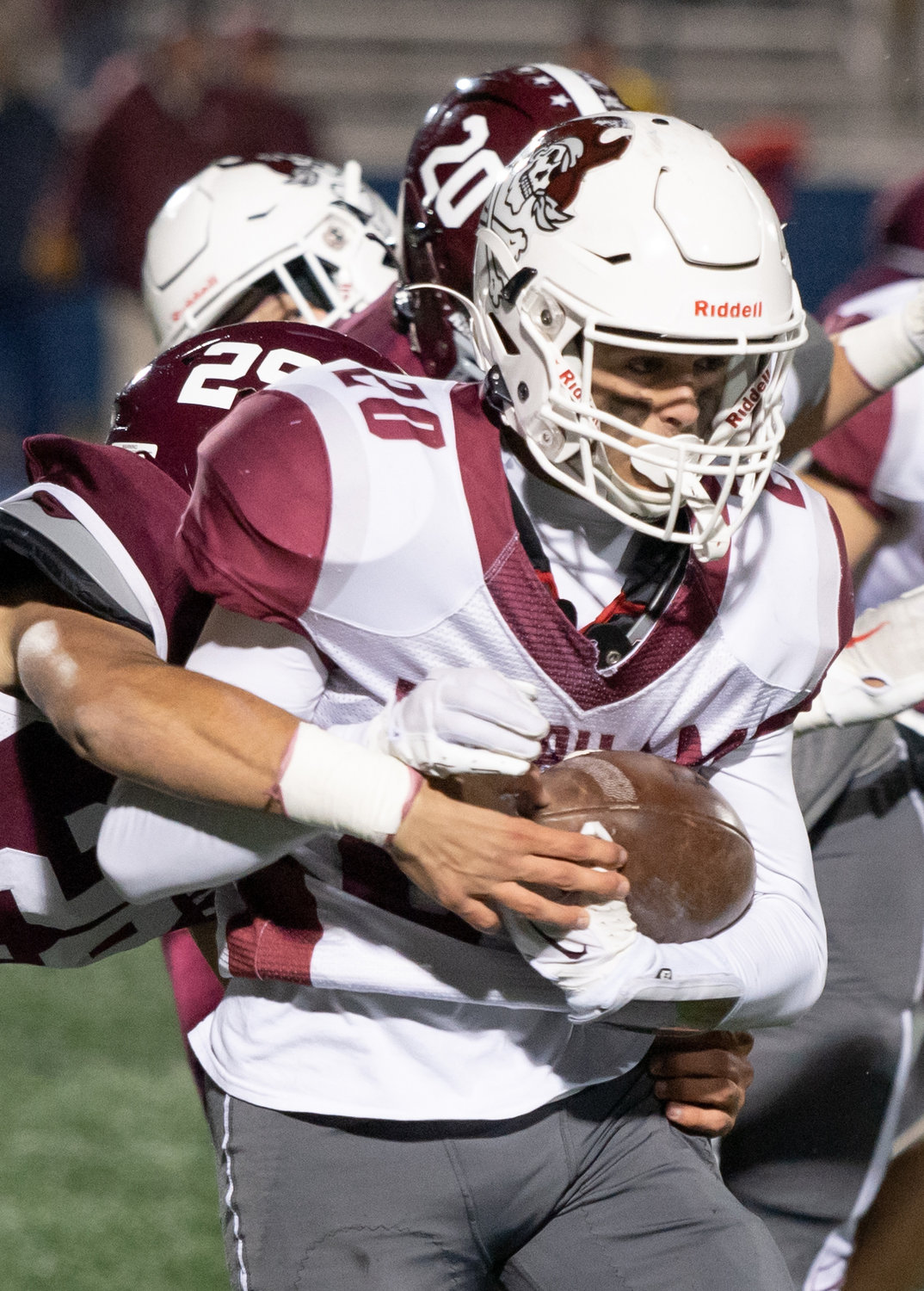 Mepham lived up to its preseason billing as the second-best football team in Nassau Conference II throughout the regular season, going 7-1.
Last Friday night at Hofstra, the Pirates remained No. 2.
Juggernaut Garden City scored touchdowns on each of its five first-half possessions and dominated the Pirates on the way to a 38-7 victory in the county championship game for its seventh straight title.
The Trojans, who outgained Mepham 236 to 11 in the opening half, upped their winning streak to 27 games and advanced to meet Bellport for the Long Island Class II crown on Friday at Hofstra at 4;30 p.m. Garden City is looking for its 10th L.I. championship.
“It was a rough one,” Mepham first-year head coach Matt Moody said. “That’s what happens when you have turnovers and bad tackling.”


Three costly Mepham turnovers led to 21 Garden City points in the first half and the margin was an insurmountable 35-0 at intermission. In the first half alone, Garden City’s Stevie Finnell had 122 yards and two touchdowns on just 12 carries and had a 21-yard interception return for another score. Jack Archer added touchdown runs of 31 and 35 yards, both on direct snaps with the latter coming on third-and-goal.
The Trojans (11-0) have outscored opponents 432-73 this season.
“For the first time all season we dropped our heads a little bit,” Moody said. “I just asked them to give me everything they had for the last two quarters.”
Mepham’s opening drive showed early promise but ended when Garden City’s Tristan Mullahey recovered a fumble on the Pirates’ 38. Four snaps later, Archer busted down the middle for the 31-yard score and the Trojans were off to the races.
RJ Votruba ended Mepham’s second possession with an interception, and Archer capped a 58-yard drive with a 35-yard touchdown run from the Wildcat on a third-and-goal after the Pirates pushed them back 28 yards on the first two plays.
Finnell then scored three times in the second quarter. He scored on a 37-yard run, on a 7-yard run, and then on the Pick-6. Garden City kicker Hayden Minuto went 5-for-5 on extra points in the first half and then booted a 34-yard field goal in the third quarter after Mepham snapped the shutout.
The Pirates got on the board with a 1-yard touchdown run by senior Ryan Thier midway through the third quarter. Thier capped an 8-play, 69-yard drive that featured 50 yards rushing from senior quarterback Dominick Novello, who led Mepham to playoff victories over MacArthur and Long Beach to get to the championship stage.
Novello’s touchdown run in the closing seconds gave the Pirates a 14-7 win over MacArthur in the first round. Then, in the semifinals, in a driving rainstorm, he broke a scoreless tie with Long Beach with a touchdown run with 7:58 remaining in the Pirates’ 14-0 win.
“We didn’t accomplish our ultimate goal, but we still had a lot of success and set a school record for wins in a season,” Moody said.