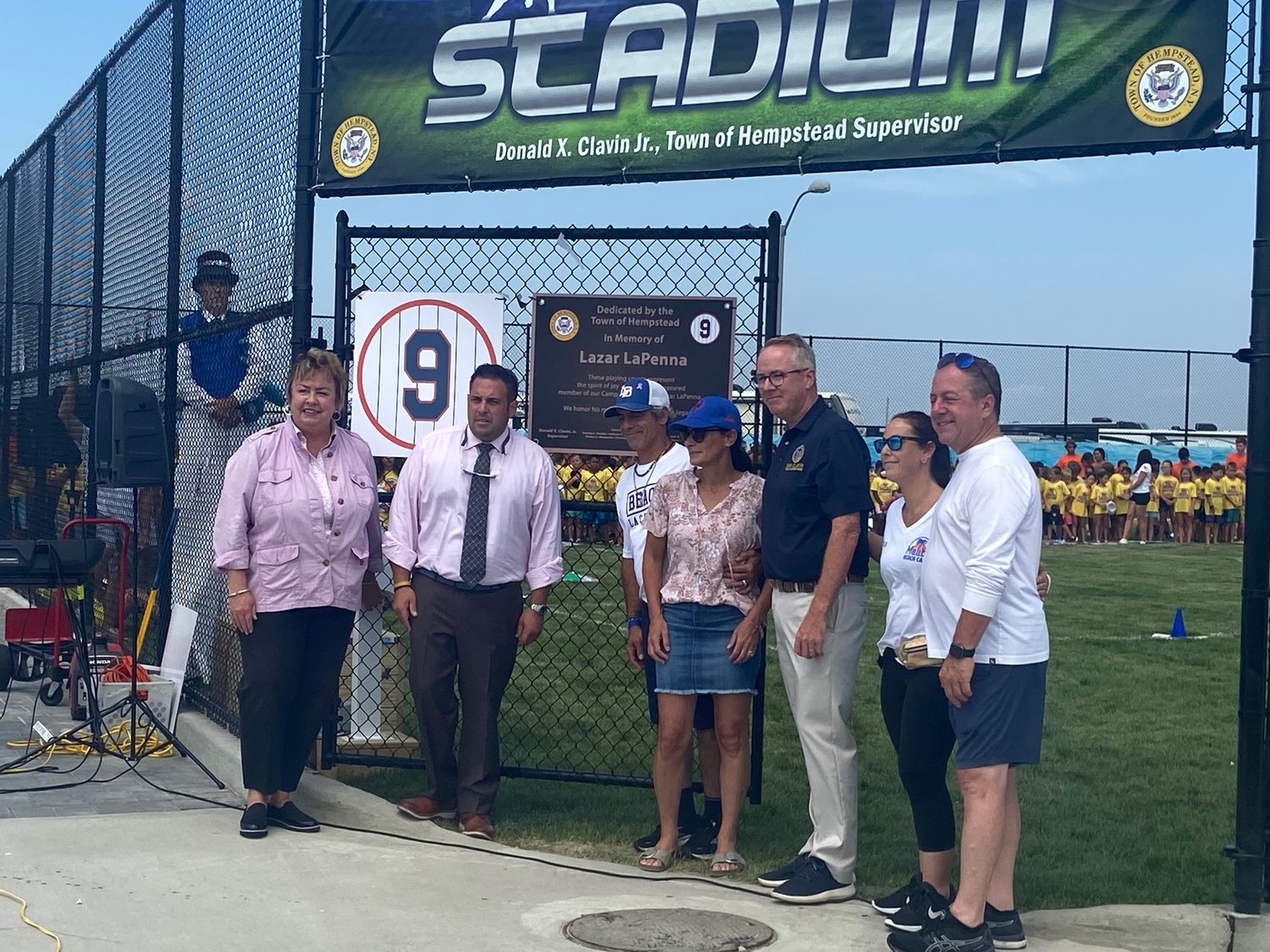 Don Clavin was joined by Gregg and Monique LaPenna and other town officials to announce the dedication of MAalibu Beach Cub fields to Lazar Thursday.
Brendan Carpenter/Herald
By Brendan Carpenter

Town of Hempstead Supervisor Don Clavin was talking about Lazar LaPenna, the 10-year-old Long Beach Little Leaguer who died on the field after suffering a seizure on April 29.

“It is a wonderful day for the dedication of the fields and the unveiling of the plaques for a very special young man who was taken away very tragically at a young age,” Clavin said on July 21 at Malibu Beach Camp.

Lazar’s parents, Gregg and Monique LaPenna, joined Clavin and other town officials at the camp, where Lazar spent five summers. They gathered to dedicate the camp’s new field in his honor, and to install two plaques: one for the field, and one showcasing his now well-known favorite number, 9.

“There was a feeling to acknowledge and give something special to remember this young man,” Clavin said. “That’s what we’re here to do today — just remember somebody who’s very, very special to not only his family, but to his friends.”

Some 600 of Lazar’s fellow campmates gathered on the newly named Lazar LaPenna Field 9, some with signs, just past the gates where the plaques were hung to honor their friend. After the unveiling, Clavin and the LaPennas joined the crowd on the field. The campers sang songs, starting with “Somewhere Over the Rainbow,” while a beach camp worker accompanied them on guitar.

The campers then did a ceremonial run around the bases in honor of Lazar.

On April 29, Lazar, who had been playing baseball since he was 5, was batting for the Braves in a Long Beach/Lido Beach Little League game, and smacked a single. His older brother, Jerry, was coaching at first base and was cheering Lazar on, along with the rest of the crowd.

The cheers went silent when Lazar collapsed, the result of what was believed to be a seizure. An ambulance was called, but he died a short time later.

Gregg LaPenna said that when his son attended the camp, “It wasn’t like he was going to camp. It’s like going to a summer family. I’m so touched — my family is touched.”

“This is something I’ll never forget,” LaPenna added. “This is Lazar. Everything that’s going on, this is him. This is the type of boy he was, and I couldn’t thank you all enough.”

The camp manager, Butch Yamali, has known the LaPenna family for years. He said he wanted to dedicate the field, and now the LaPennas “will see, the children will see, and your grandchildren and everybody else will see it.”

Lazar’s death was commemorated around Long Beach. He was a fifth-grader at East Elementary School, and district Superintendent Jennifer Gallagher wrote in a statement, “This tragedy is sure to raise many emotions, concerns and questions for students and staff, particularly for those who are close to this family.”

“Please continue to keep the LaPenna family, especially Lazar’s parents and siblings, in our thoughts and prayers,” Gallagher wrote.

The City Council, led by President Karen McInnis, paused before an April meeting to honor the boy.

In May, the New York Mets left three bats leaning on a wall outside their clubhouse in tribute to Lazar, who was a die-hard fan. “We send our love and support to his family and teammates in the Long Beach/Lido Beach Little League,” the team wrote in a social media post. A number of Long Beach families also left bats outside their homes, with the hashtag “Bats Out For Lazar.”