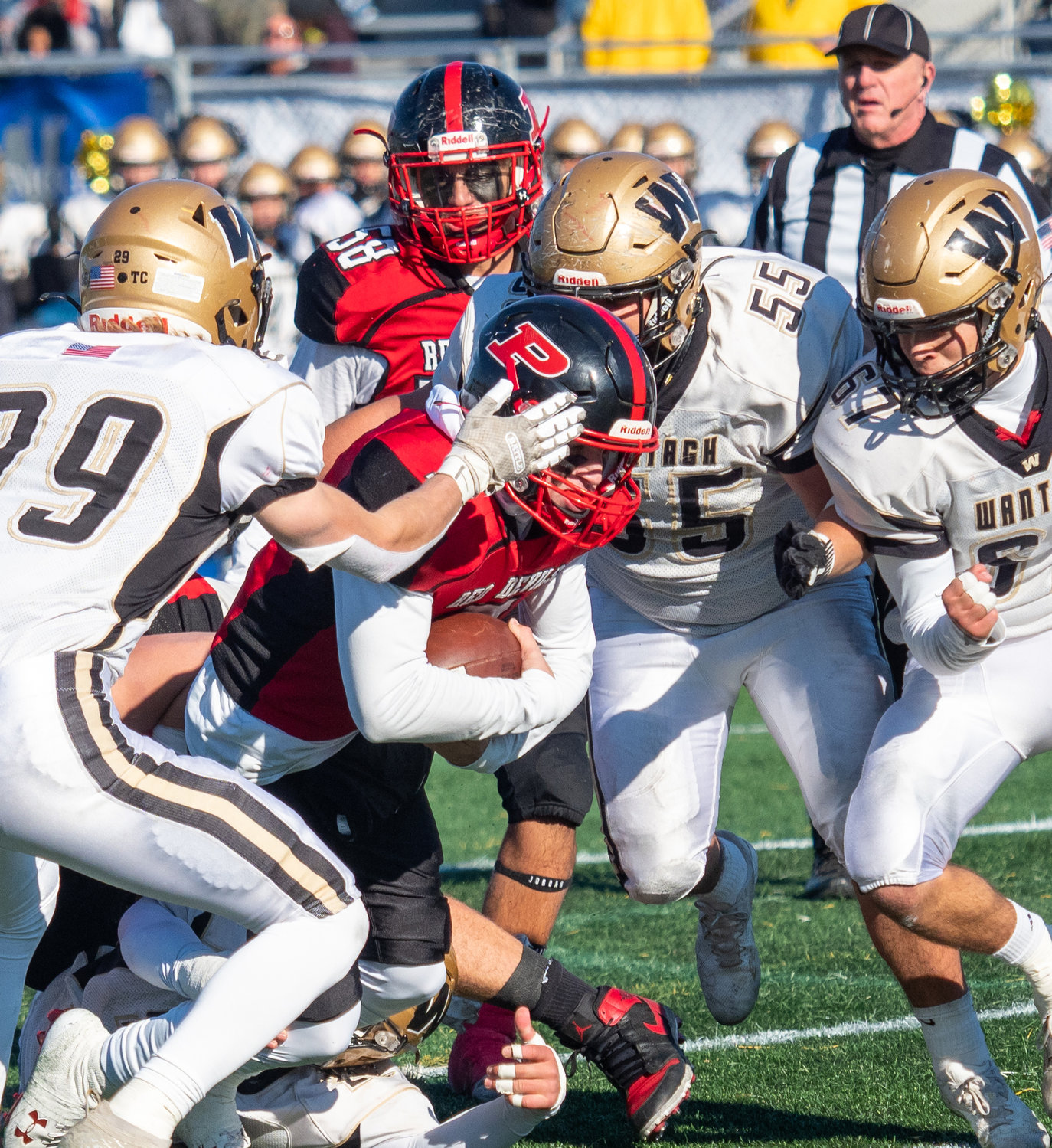 Wantagh was on the verge of heading into halftime of the Conference III football championship with unbeaten Plainedge only down a touchdown before one play suddenly flipped the momentum.
Trailing by 10, the Warriors drove to the Plainedge 21 and lined up for a 39-yard field goal with three seconds left in the second quarter. Plainedge’s James Kass found an open lane and blocked the kick with Michael DeMatteo scooping the ball up and racing 71 yards for a touchdown.
The blocked field goal proved to be the decisive play in Plainedge’s 38-13 win at Hofstra’s Shuart Stadium last Saturday afternoon, giving the Red Devils their second straight county title. Wantagh finished its season 9-2 with both losses coming at the hands of Plainedge.
“We actually took control of the game in the second quarter and started stopping them and moving the ball very easily and we’re very excited about going into halftime down 10-3 three and we thought we’d win the game,” said longtime Wantagh head coach Keith Sachs. “That kind of demoralized us and we tried to get over it, but it was hard.”
The Warriors, who fell to Plainedge 35-7 in the teams’ regular season meeting on Oct. 22, trailed 10-0 prior to the pivotal play to the end first half after holding a high-powered Plainedge offense to a field goal and punt on the previous two possessions. The team drove 70 yards in just three plays to set up the field goal attempt.


Plainedge put the game out of reach in the third quarter with back-to-back touchdowns to make it 31-0. Senior quarterback Joe Legovich got Wantagh on the board late in the third quarter with a one-yard touchdown run. Senior running back Nick Cupelli had a 65-yard touchdown run in the fourth quarter followed by a Niko Zervos extra point to produce the game’s final points.
Cupelli in his final high school football game finished with 141 yards rushing on 17 carries.
“They are a tough team to face and we solved it and figured it out around the second quarter and they were using times outs on on third and fourth downs because they didn’t know what to call and they got a bunch of penalties they were rattled which was nice to see,” said Sachs of how the game was shaping up late in the first half. “They were completely disoriented and rattled and worried and I think if it would have gone into the fourth quarter like that we would have won the game.”
While the season ended short of a championship, Sachs is proud of how his team competed until the end. Wantragh reached the country finals with a dominating 28-0 win against third-seeded Bethpage with Cupelli amassing 100 yards on the ground and a touchdown. Junior running back Jake Martini also had a big day in the Bethpage win with 73 yards rushing on just nine attempts.
“We weren’t supposed to be a great team and we really came together,” Sachs said.  “Everybody really stepped up and bought in.”