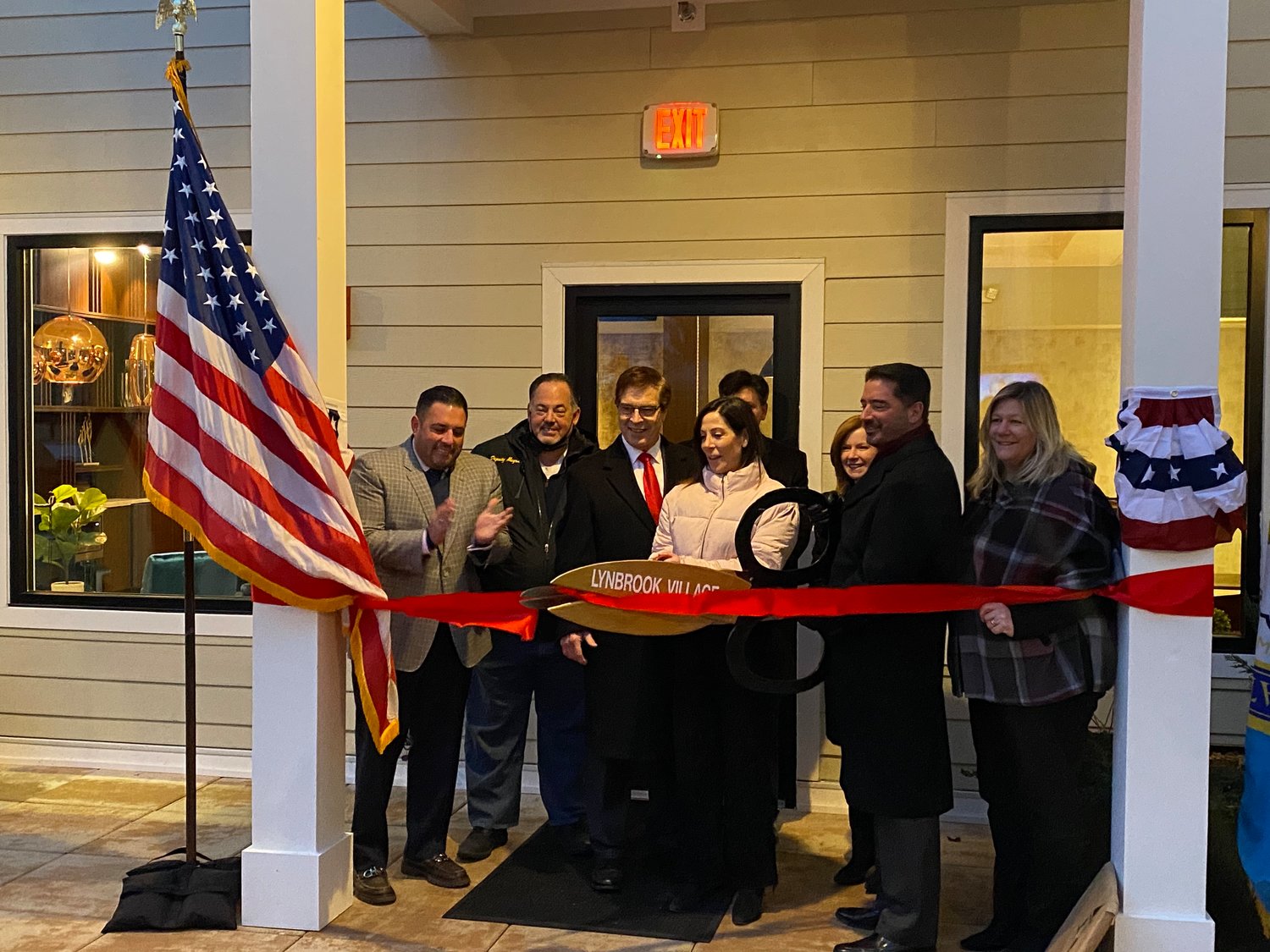 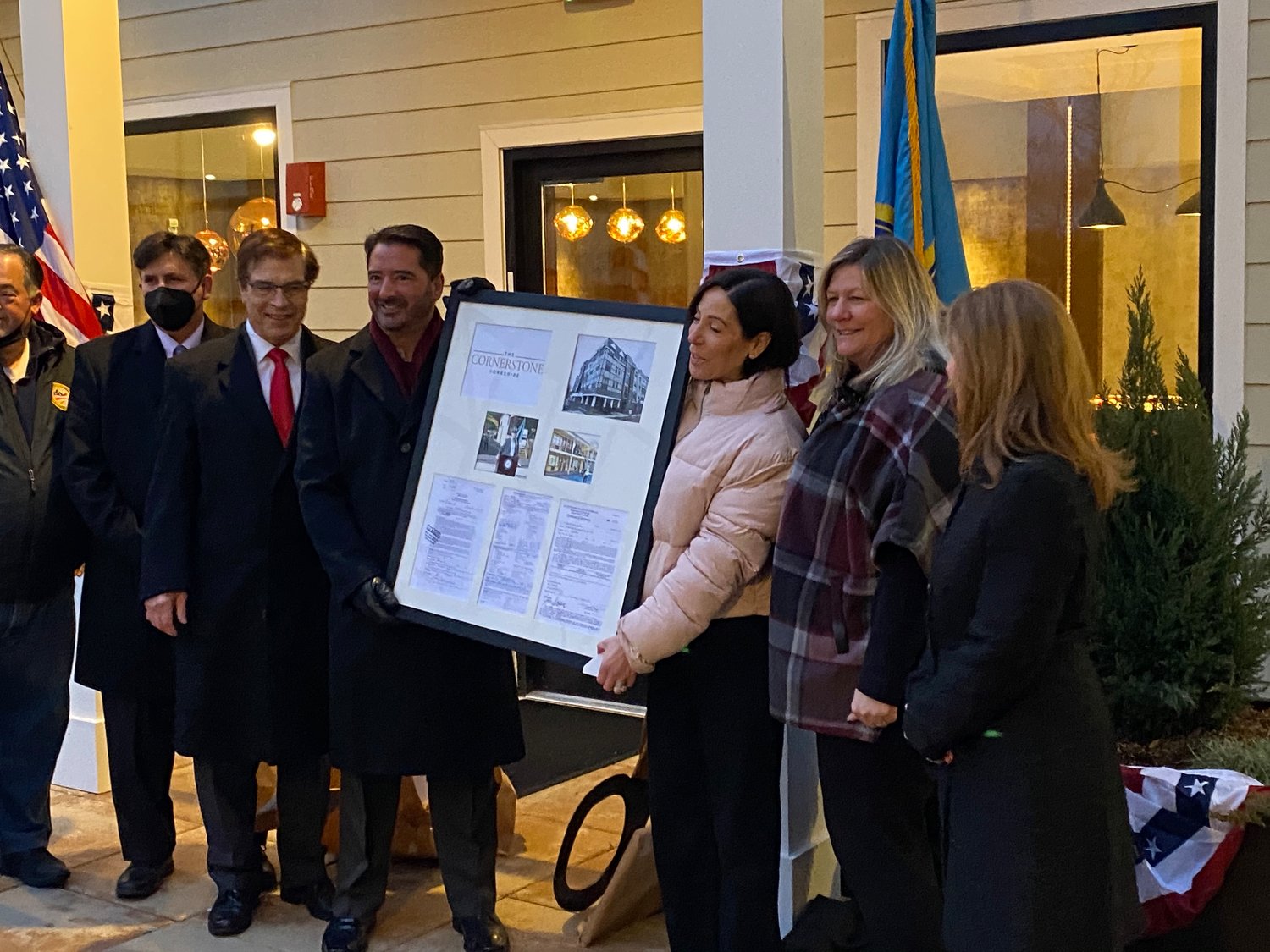 Beach and the village board presented Terwilliger and Bartone with a framed photo of the Cornerstone, the demolition permit for the Capri Lynbrook Motor Inn and the certificate of operation.
Mike Smollins/Herald 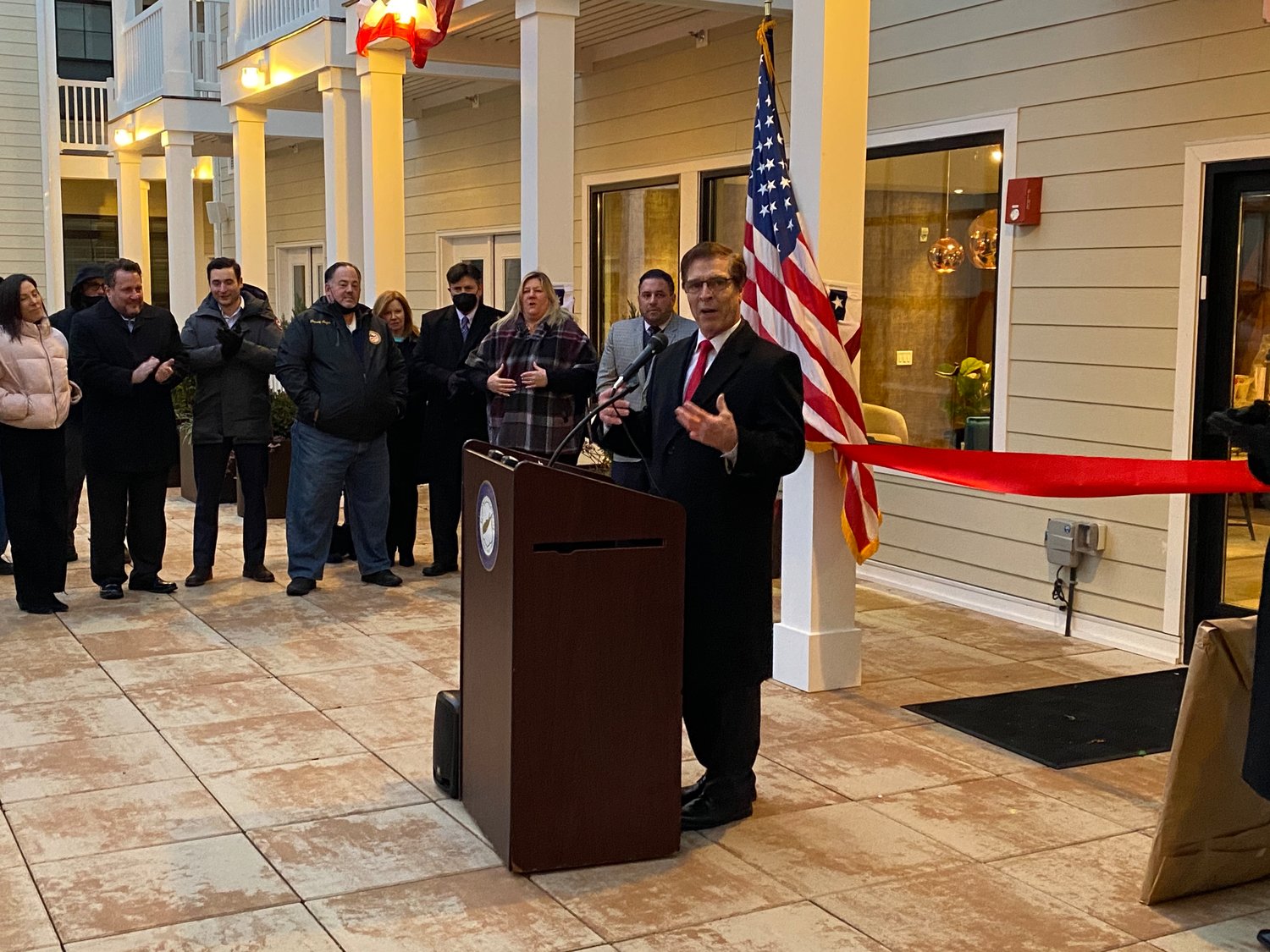 Beach said that having the Cornerstone at Yorkshire replace the Capri was like turning a dream into reality.
Mike Smollins/Herald 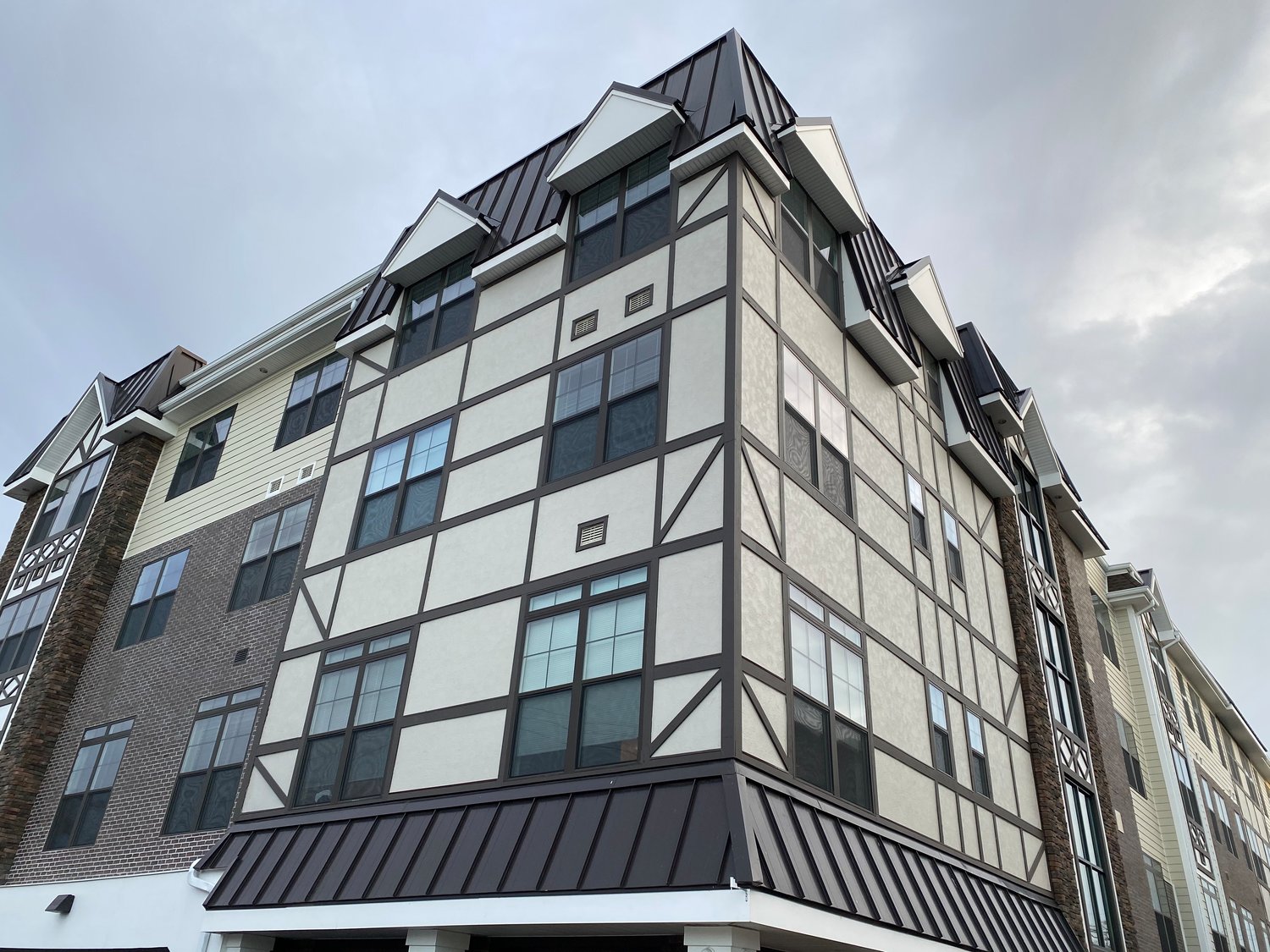 The exterior of the four-story, 80-unit, $24 million apartment complex.
Mike Smollins/Herald
Previous Next
Thoughts on the Cornerstone

“This is something that is critically important for the future of Long Island. It’s transit-oriented development. You can walk to the train station, and it will bring people to Lynbrook.”

“You’re transforming one of the worst motels on Long Island, probably, to this, which is just stunning . . . Around Long Island, there’s this myth that communities are against development, but they’re not against good development, and this was so well done.”

“This is a game-changer for Lynbrook . . . To eliminate the Capri and put this in its place is more than just a wow. This is probably one of the best projects we’ve seen at the Nassau County Planning Commission.”

“This is what Lynbrook needs, in my opinion. We need this infusion of young people, of people who are coming in here and looking for luxury apartments and want to be a part of our community, who are going to patronize our stores.”

Standing at a lectern in the courtyard of the Cornerstone at Yorkshire building at the former site of the much-maligned Capri Lynbrook Motor Inn, Mayor Alan Beach prepared to cut the ribbon on the new complex, while reflecting back on the decades of battles that several administrations had with the former motel.

At the Jan. 20 ribbon-cutting, surrounded by village trustees, developers, Chamber of Commerce representatives, elected officials, Nassau County Industrial Development Agency members and tenants of the new building, Beach discussed the sordid history of the Capri and how the Cornerstone represented a new beginning. He also noted how the Guggenheim Museum, built by Frank Lloyd Wright, opened in New York City on Oct. 21, 1959, and that around the same time, 17 miles to the east, the Lynbrook Building Department received a submission for a new motel to be built at 5 Freer St.

“Weren’t we lucky?” Beach said with a laugh. “It’s kind of funny, but sad. While the museum quickly became New York City’s biggest tourist attraction with its discounted admission rates, the Capri became Lynbrook’s. Discounted short stays, hourly rates and a $10 upgrade for a Jacuzzi that was attached to the room. And many came 17 miles to Lynbrook.”

A four-story, 80-unit, $24 million apartment building replaced the motel, which was razed in June 2020, after several battles between village officials and the motel’s owners over alleged crime at the site. The development, approved by the village board in November 2019, was completed by the Farmingdale-based Terwilliger & Bartone Properties.

Anthony Bartone, a managing partner for Terwilliger & Bartone, said the apartments are about 30 percent leased, but he expected them to be fully occupied soon. He praised the village board for its leadership in seeing the project through, and said he was pleased to open the development on schedule, despite many challenges.

“We said we’d deliver this building in 18 months,” he said. “Through Covid, through supply chains and everything, guess what? We opened in 18, and I’m very proud of that.”

Fran Terwilliger, also a managing partner, said she was pleased that despite the obstacles caused by the coronavirus pandemic, the complex’s opening went smoothly, and she was pleased village residents offered their opinions on the building’s design during open houses.

Of the building, she said, “The exterior is the past of Lynbrook, which has so much character to it, and then the interior is the new, modern, going-forward look into Lynbrook.”

Chamber President Cory Hirsch recalled that, as a former Lynbrook firefighter, he was called to the Capri several times over the years, adding that he was excited there would be an influx of new residents to patronize local businesses.

Cornerstone apartments include quartz counters, stainless-steel appliances and high ceilings, and the complex has a fitness center, clubroom and courtyard. It comprises eight two-bedroom apartments that rent for about $3,400 per month, 44 one-bedroom units that cost roughly $2,800 and 28 studios, which are about $2,300 per month. Eight units were set aside as workforce housing, which, under federal Department of Housing and Urban Development regulations, must offer reduced rents for households earning up to 80 percent of the median income for the area. The building’s first story houses a parking garage, and three stories are for the apartments over the nearly one-acre site.

The Nassau County Industrial Development Agency unanimously granted a PILOT, or payment in lieu of taxes, agreement for it in February 2020. The IDA granted a mortgage-recording tax abatement, a sales-tax abatement and a 20-year PILOT, which will begin at the present tax level of $228,155 per year and gradually increase to $1.1 million by its final year.

Terwilliger & Bartone Properties has tried for years to build an apartment complex in Lynbrook, including the Cornerstone at Lynbrook project, which spurred community backlash and a contentious mayoral race between Beach and his former deputy mayor Hilary Becker, who did not seek re-election when his trustee term came up last March. Beach said the board was united in its efforts to rid the neighborhood of the Capri and to welcome what he called smart development.

“This was a dream,” he said, “and for it to become a reality is unbelievable for me.”