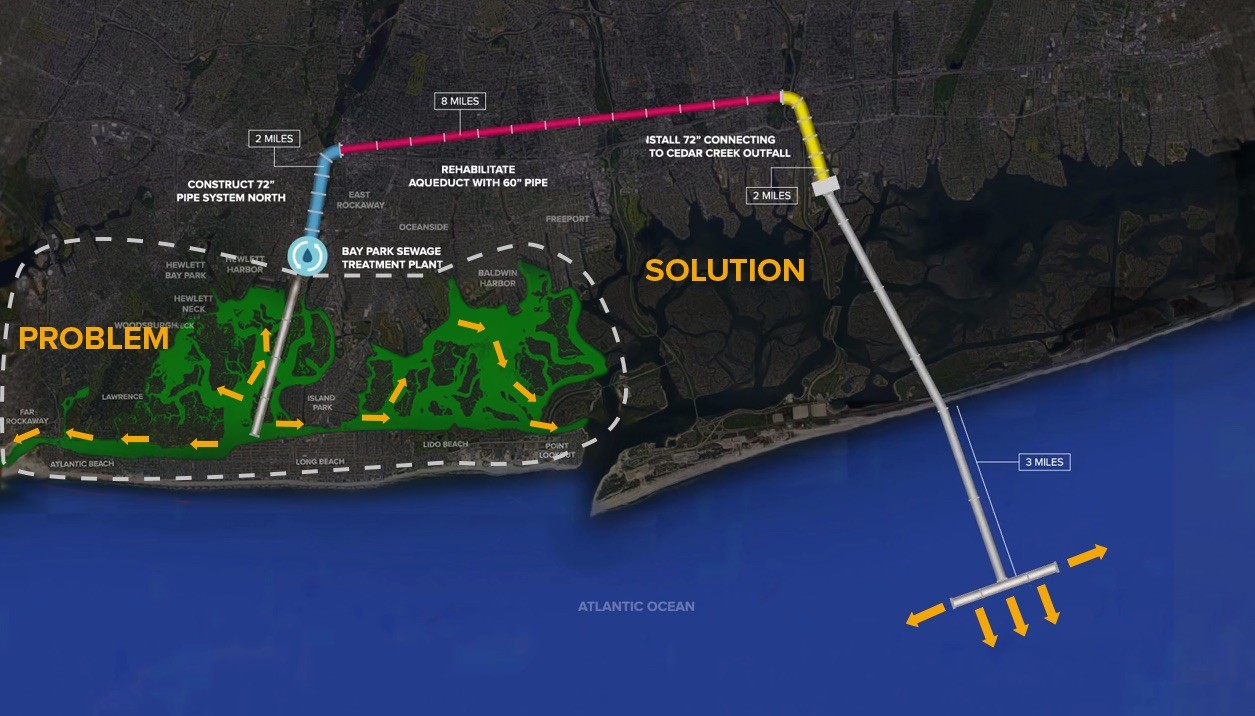 The federal Emergency Management Agency is providing $5 million to help cover engineering costs for a planned project to send partially treated sewage from the Bay Park Water Reclamation Facility in East Rockaway to the Cedar Creek Water Pollution Control Plant in Wantagh, where it will be sent for discharge three miles out in the Atlantic Ocean.

Nitrogen-loaded wastewater from the Bay Park plant, called effluent, is now being discharged into Reynolds Channel, just north of Long Beach, where it is harming marine life, officials say.

The pipe project, which is projected to cost $354 million, will involve refurbishing a 100-year-old aqueduct beneath Sunrise Highway that is now unused. Before construction begins, the New York State Department of Environmental Conservation will conduct an environmental review.

Nassau County will contribute $157 million to the project, while the state will put in $78 million, and the New York State Environmental Facilities Corporation will loan $41 million. The county applied for FEMA funding, and was recently granted the $5 million.

Referring to the financing of the pipe project, Brian Schneider, the county’s deputy public works director, said, “Final details are being worked out between all entities, but preliminary work has already begun.”

According to Michael Martino, the outgoing communications manager for Suez, which manages the Bay Park facility, the majority of the work will be completed by 2020. “A couple of projects will extend beyond that date, but for the most part, the 2020 date should cover the majority,” Martino wrote in an email.

About 50 million gallons of raw sewage from roughly 500,000 Nassau County homes is treated at the Bay Park facility each day, according to Schneider. The effluent’s high level of nitrogen accelerates seaweed growth in the Western Bays. As the seaweed grows unusually long, it disintegrates and robs the water of dissolved oxygen, which in turn kills marine life.

The Western Bays stretch for 10 miles, from the Rockaway Inlet in the west to Jones Inlet in the east. They are home to a large concentration of salt marshes, and provide essential habitats for birds and marine species. The Bay Park plant has been sending treated sewage into the bays, which were once productive fishing and clamming areas, since the 1940s.

Many parts of the bays are now considered “dead zones,” according to environmental experts. Adrienne Esposito, executive director of Citizens Campaign for the Environment, said that her organization and other Long Island environmental groups, such as Freeport SPLASH (Stop Polluting Littering and Save Harbors), have been concerned about the state of the waterways for more than a decade. Environmentalists like Esposito say that pumping effluent through the Sunrise Highway pipe and out into the Atlantic, rather than into Reynolds Channel, should restore the Western Bays in a matter of years.

In July, the county determined that the aqueduct is a “viable host pipe” to transport the effluent. “The aqueduct has been extensively tested and has been found to be an excellent candidate for repurposing, such as transmitting treated sanitary effluent,” Schneider said. Though its structure was deemed sound, an eight-mile stretch of the aging pipe will have to be rehabilitated as part of the project, the study determined.