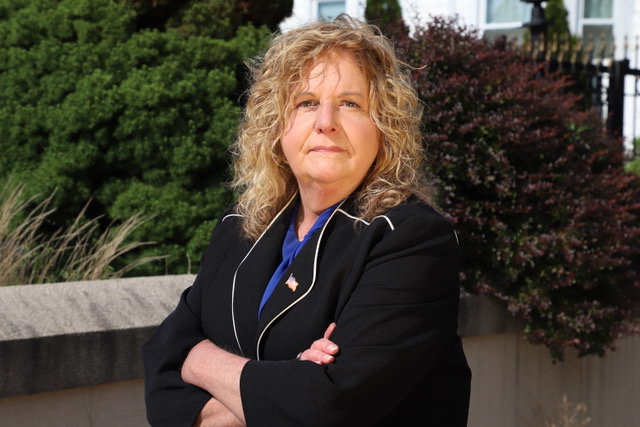 Anne Donnelly, a career prosecutor who this week was named the Nassau Republican’s nominee for county district attorney, wasted no time calling out what she sees as her opponent’s chief vulnerability: State Sen. Todd Kaminsky, she says, is the author of the ”get out of jail free laws.”

Kaminsky, a Long Beach Democrat who has served in the State Senate since 2016, was a supporter two years ago of the controversial bail reform legislation, which allowed suspects in some type of crimes to be released from jail without bail. The bill was amended last year to give judges more discretion to assign bail for violent and other crimes. Now, more than 20 crimes are once again “bail eligible.” Kaminsky backed the changes to the law, which was originally passed through the state budget.

Nonetheless, Donnelly, a 32-year career prosecutor who is currently deputy chief of the Organized Crime and Rackets Bureau, has taken aim at Kaminsky, only days after being nominated by the GOP for the race.

In her first news release last week, Donnelly, of Garden City, blasted her opponent as “a political opportunist who has spent his time in Albany writing get out of jail free laws to turn loose more dangerous inmates onto our streets."

She also charged that he is a “career opportunist who has worked to turn loose dangerous criminals into our neighborhoods.”

Nassau GOP Chairman Joseph Cairo Jr. said in a statement that “the choice for district attorney this year is clear. Republicans have put forth a candidate who has dedicated her career to keeping the public safe and putting dangerous criminals behind bars."

“Senator Todd Kaminsky is a fearless former federal prosecutor who has put Long Islanders’ safety first his entire career,” Jacobs said in a statement. “When fringe groups were crying ‘defund the police,’ Todd did the opposite: He added more money for Long Island cops and strengthened our criminal laws. Todd is the right choice for the next Nassau County district attorney. I’m thrilled to support him.”

The bail reform bill was a major issue last year when Kaminsky ran for re-election against Republican Victoria Johnson, who centered her campaign on the matter. Johnson, in the view of political analysts, fared better than expected, garnering about 60,000 votes, compared to 68,000 for Kaminsky.

“I'm delighted to be a candidate for Nassau district attorney,” Donnelly said. “I have dedicated my career to keeping the public safe and prosecuting those who commit crimes. I want to be the district attorney in order to protect Nassau County residents from dangerous criminals who pose a threat to society."

In an interview earlier this week, Donnelly said the bail reform bill — even amended — remains an issue. “The loss of a judge’s discretion is major,” she said. She said some people charged with serious crimes are still released without bail. “They put a Band-Aid on it,” she said of the amended law.

Donnelly said she was running to “help strengthen” the D.A.’s office, where she has worked for more than three decades. She said, if elected, she would beef up the office's cybersecurity unit and crackdown on gangs in the county.

Rich Orsillo, a Kaminsky campaign spokesman, said, “Todd Kaminsky is a fearless prosecutor who has put violent criminals behind bars and led the convictions of corrupt politicians from both parties—and his record is second to none. As district attorney, he will continue to protect Long Islanders and be a tireless champion for Nassau County, delivering again and again for our families without being beholden to party bosses.”