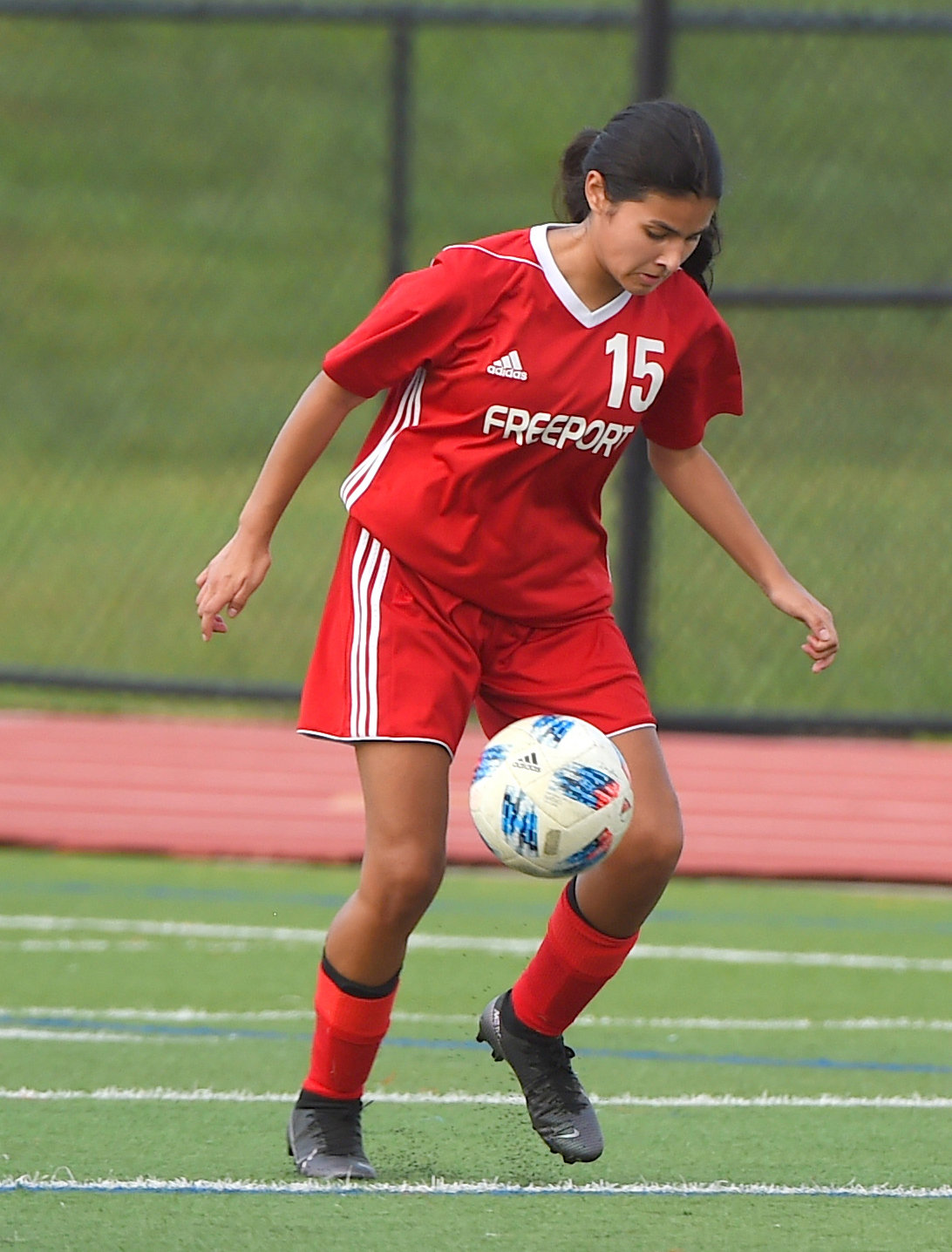 Senior Vanessa Mendoza has enjoyed a solid season for the Red Devils, who held their own against conference foes throughout the campaign.
Donovan Berthoud/Herald
By Brian Kacharaba

Despite missing the playoffs, the Freeport girls’ soccer team was much improved this season with some convincing wins while having their best player place among the Long Island leaders in goals. With some more experience and consistency, the Red Devils could be even better next fall.
On the eve of the regular-season finale, Freeport (6-7-0) had a chance to finish at .500 after winning just twice during the abbreviated spring season. The Red Devils won two of their last three games after a 2-0 triumph at Uniondale last Thursday and will finish fifth in Conference AA-2.
But Freeport has been the quintessential Jekyl and Hyde team this fall, winning its six games by an average margin of almost five goals while losing its seven by five. Coach Helen Saballos chalked that up to her team’s inexperience.
“It gets very frustrating because they kind of stopped playing,” she said. “Now they play through the end and that’s why the results were better towards the second half than it was the first half. Some of them just started playing soccer freshman year.”
One player who is far from inexperienced is star senior Ancksu Dixon, who scored both goals against Uniondale to bump her season total to an astounding 31, good for second in Nassau County. It was her eighth multi-goal game of the season, which also includes three five-goal efforts that occurred in the two games against Westbury and at Hempstead on Oct. 7.


Dixon has been pumping in goals despite some coaches putting multiple defenders on her.
“She’ll still get around them,” Saballos said. “She does a lot of it on her own, but it’s her teammates [too]. We’re not a one-player team and I tell the girls that if you have the shot, take it. If you don’t feel comfortable taking that shot, find Su and let Su rack up her scoring.”
Some of her goals were set up by midfielder Alisson Caceres, who had eight assists in the first 13 games along with three goals. Saballos said Dixon went out of her way to help the budding sophomore refine her skills on the pitch.
“She’s going to be my star player next year,” Saballos said of Caceres. “I need more confidence from her, but she can be as good as Su.”
Senior Arianna Martinez had an “amazing” final season on the back end, according to Saballos. She mustered a goal and four assists while playing through injuries and refused to leave any of the games.
Senior midfielder Vanessa Mendoza and junior defensive back Makayla Perreaux scored the other goals for Freeport this season. Mendoza’s came in a 5-0 home win against Uniondale on Sept. 24 and Perreaux tallied during a 7-1 rout at Westbury on Sept. 29.
Saballos also saw a glimpse of the future in junior goalkeeper Kricia Lopez after she got called up from the JV squad late in the season as an injury replacement. Lopez recorded the shutout against Uniondale.