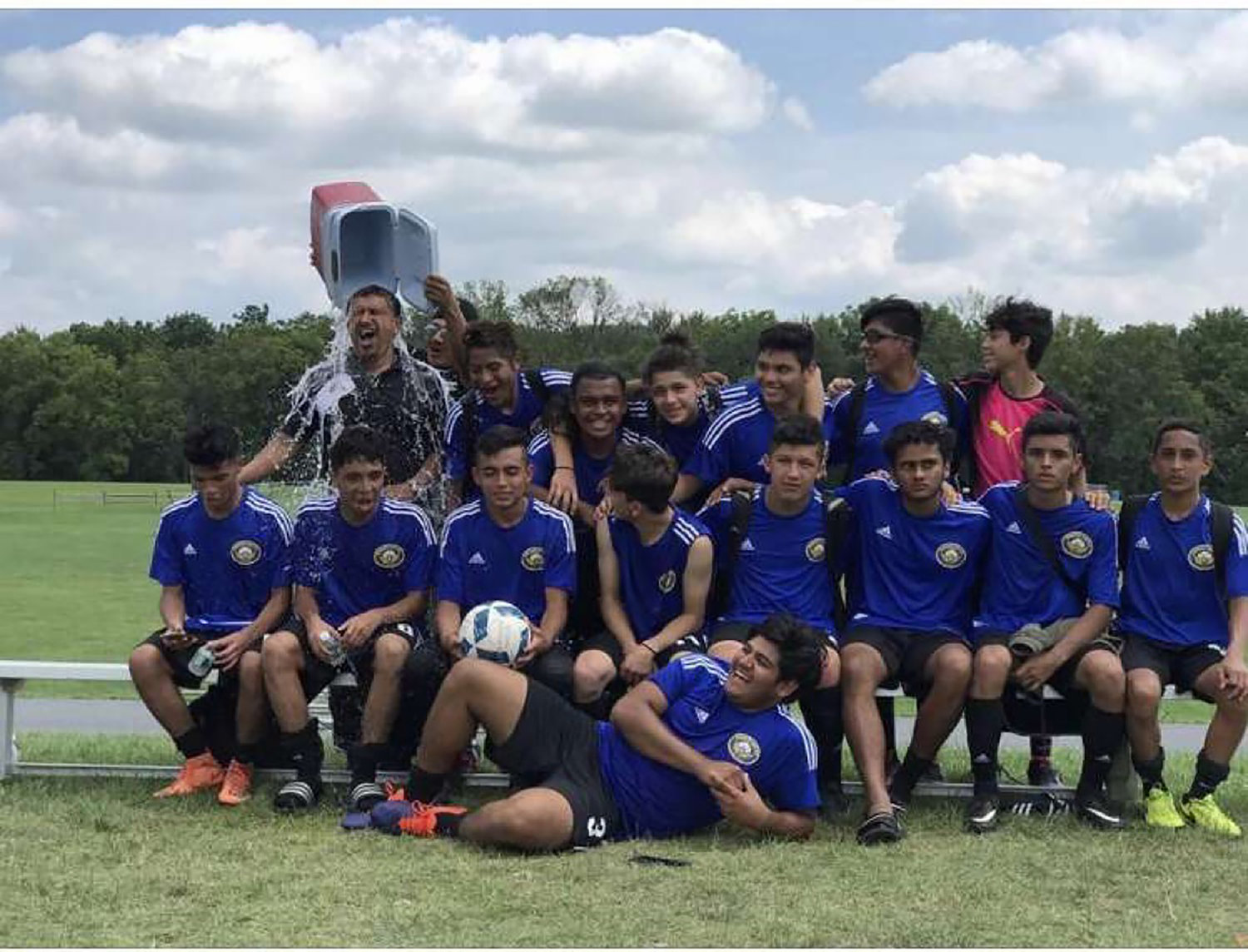 Coach Marlon Navarro had a bucket of water poured on him as a prank during a team photo when Luis Magana was in the club four years ago.
Courtesy Luis Magana
By Letisha Dass

The Inwood United Soccer Club has been a steppingstone for many amateur soccer players to express their love for the sport for the past 10 years.

Founded in 2012 by parents in Inwood, the club has succeeded in giving children an opportunity to learn, socialize, exercise and long-lasting friendships.

“We work for free, just to see our kids playing [and] doing some exercise,” Mayra Martinez, a mother of Inwood United players.

Coach Marlon Navarro, the coordinator for Inwood United, said the club was founded to provide an inexpensive way to teach children “discipline [and] tools, so they can use it in life through soccer.”

During the pandemic, Navarro said the club has had to downsize and raise its prices. Divided by age groups, the Inwood United once had teams for all ages, ranging from ages 7 to 16. Now, there are only two teams: the Inwood Pride for ages 14 and Inwood Dragons for ages 16.

At one point, Navarro said, the club had up to 300 players but because of the halt to sports due to the coronavirus, it now only has 60 children registered.

As a nonprofit, the club heavily relies on parent support and registration. To cover the cost of equipment, uniforms, and field rentals with the declining number of players, registration prices have had to raise to at least $360 per child.

“Just the parents pay for them,” Navarro said. “We got no support from other organizations or government help. We run the program by ourselves.”

Over the years, the club has struggled to find a home base to practice. “Sometimes we don’t have places to practice in [the] wintertime or at this time [spring],” Martinez said, “and we go anywhere.”

Luis Magana, 20, of West Hempstead, was a part of the club for about five years throughout his middle school and high school career. He learned about the club after playing against his friend, who lived in Inwood and was in the club.

The affordability of the club, which he said was cheaper than most soccer academies, and the opportunity to play in a higher league attracted Magana. “All the coaches there were amazing,” he said. “It wasn't an academy club. But we had a good team. It was a good thing for the amount that we were paying.”

Through the club, Magana was able to grow his passion for the sport and has continued to play at Nassau Community College. Magana said, he hopes to play professionally.

He attributes his motivation to further pursue soccer to the club’s support, training, and the lessons they taught him. “They taught me a lot of life lessons, not even just soccer like just in life in general,” Magana said. “I knew I could text any one of those coaches, and ask them for advice, and they'll be there for me.”