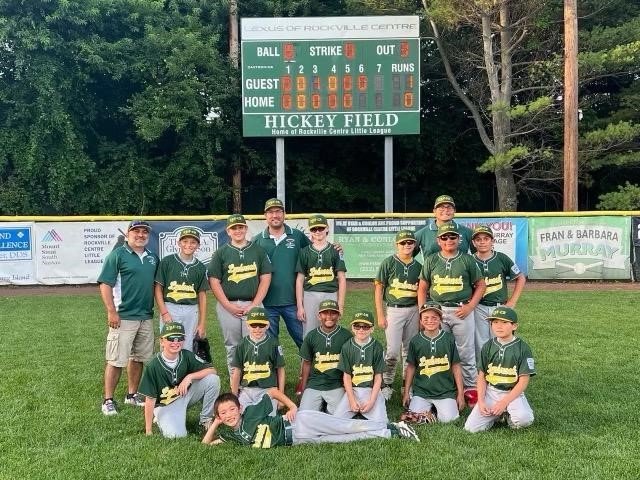 We started this at the 10-year level last year, being our first taste of playing on a tournament team, and at that level, we did very well, but we just couldn’t close it out at the end.”
Billy Becker, Manager
Brian Pfail

David Smollett, vice president of the Lynbrook East Rockaway little league said, “Congratulations to the 11-year-old champions representing Lynbrook and East Rockaway communities, we are very proud and looking to them and their success playing in the sectional tournament coming up next week.”

The team is part of the chartered Williamsport Little League. It has been since 1956. The league features a tournament leading up to the Little League World Series in August, the same one shown on TV for the 12-year-old division.

“It’s the regionals, and then there’s another tournament at which point we go to Bristol,” said team manager Billy Becker.

“We started this at the 10-year level last year, being our first taste of playing on a tournament team, and at that level, we did very well, but we just couldn’t close it out at the end,” said Becker.

The team manager said he looks over a great group of kids who will be even better after the tournament, whether they win or not. He went on to talk about what held them back in the prior year.

“It was our first year at the 10-level. It was new for the kids; when you play little league, you have a great deal, a mixture of kids,” said Becker. “So [what] you do here is grab what you think is the most qualified and put them on.”

This year had a couple of changes for Becker, but his team’s pitching strengthened. “They’re wonderful. They all can hit; they all know the game,” said Becker. He acknowledged kids would make a couple of errors which contributed to their losses. The year prior, pitching was lacking, but the kids were still “very resilient.”

“It sounds so cliche, but we really have a good team at this age,” said Becker. “I feel like I was a part of that, in that, watching these kids evolve.” He remarked how travel baseball helped improve some of the players' athleticism. All in all, they were a “great talented group of kids. They understand the sport.”

He said it was too soon to see where the kids were headed and that errors shouldn’t be held too much to account as even the Yankees miss a few.

“I think it's awesome for the rest of the kids and their families. It’s a very proud moment for us as a little league,” said Becker. He commented the merger between East Rockaway and Lynbrook gave them the “best of the two towns.”

Becker said, “It’s a great organization. It’s a great bunch of guys on the board, and they really do a great job with this little league.” He also remarked how playing outdoors removed his son from playing video games to enjoying sports.

“He’s got his glove in his hand [and] he’s like are we going to warm up?” Said Becker, “we practice every other night. Kids [are] out there, [and] ready to go.”

It’s been over 10 years since any Lynbrook or East Rockaway team has reached sectionals, with next year bringing them possible stardom in the 12-year-old division’s showcase of the little league world series in Pennsylvania.