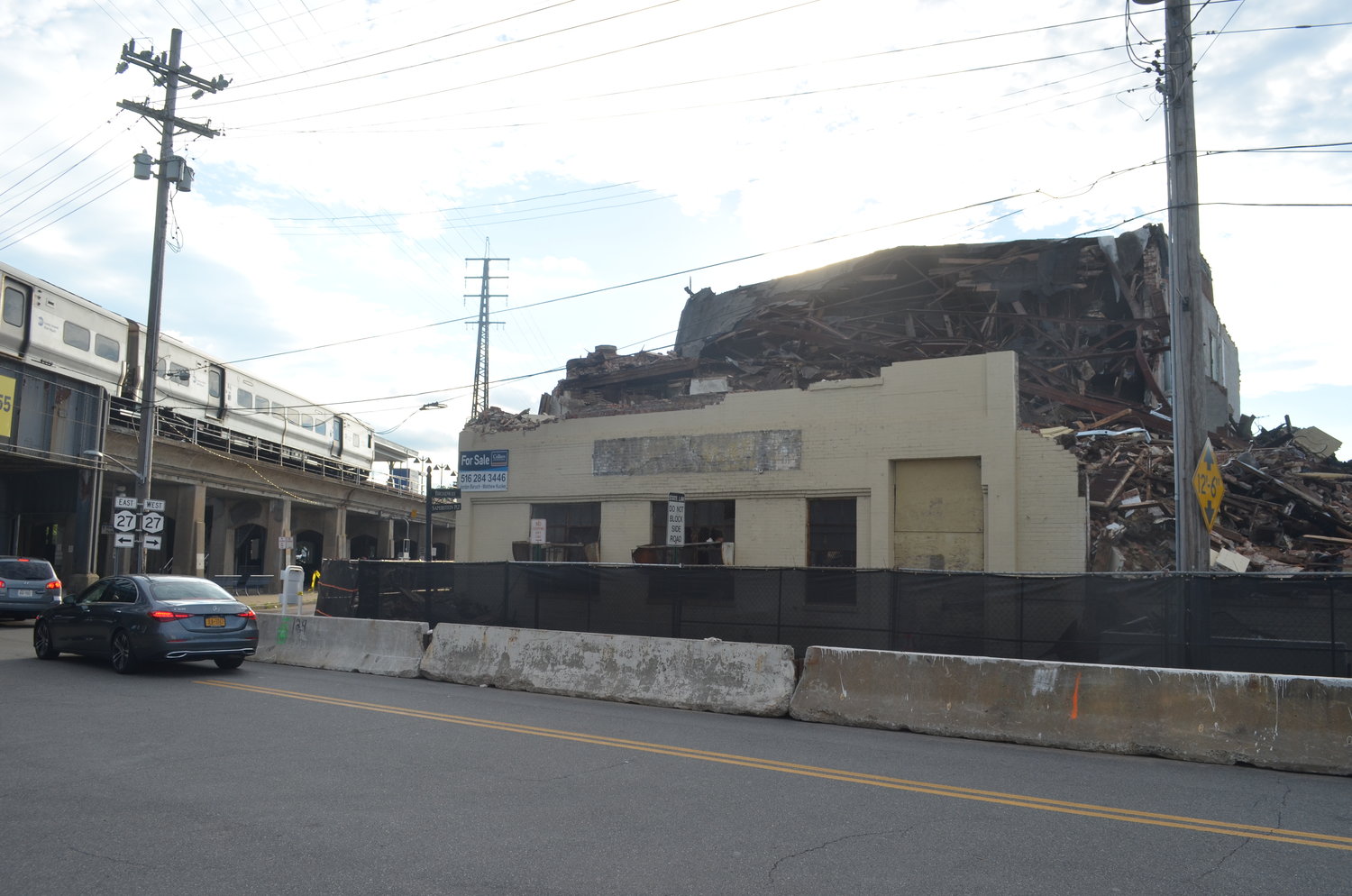 Demolition is now well underway for the former feather factory on Broadway. New transit-oriented housing is planned for the space.
Tim Baker/Herald 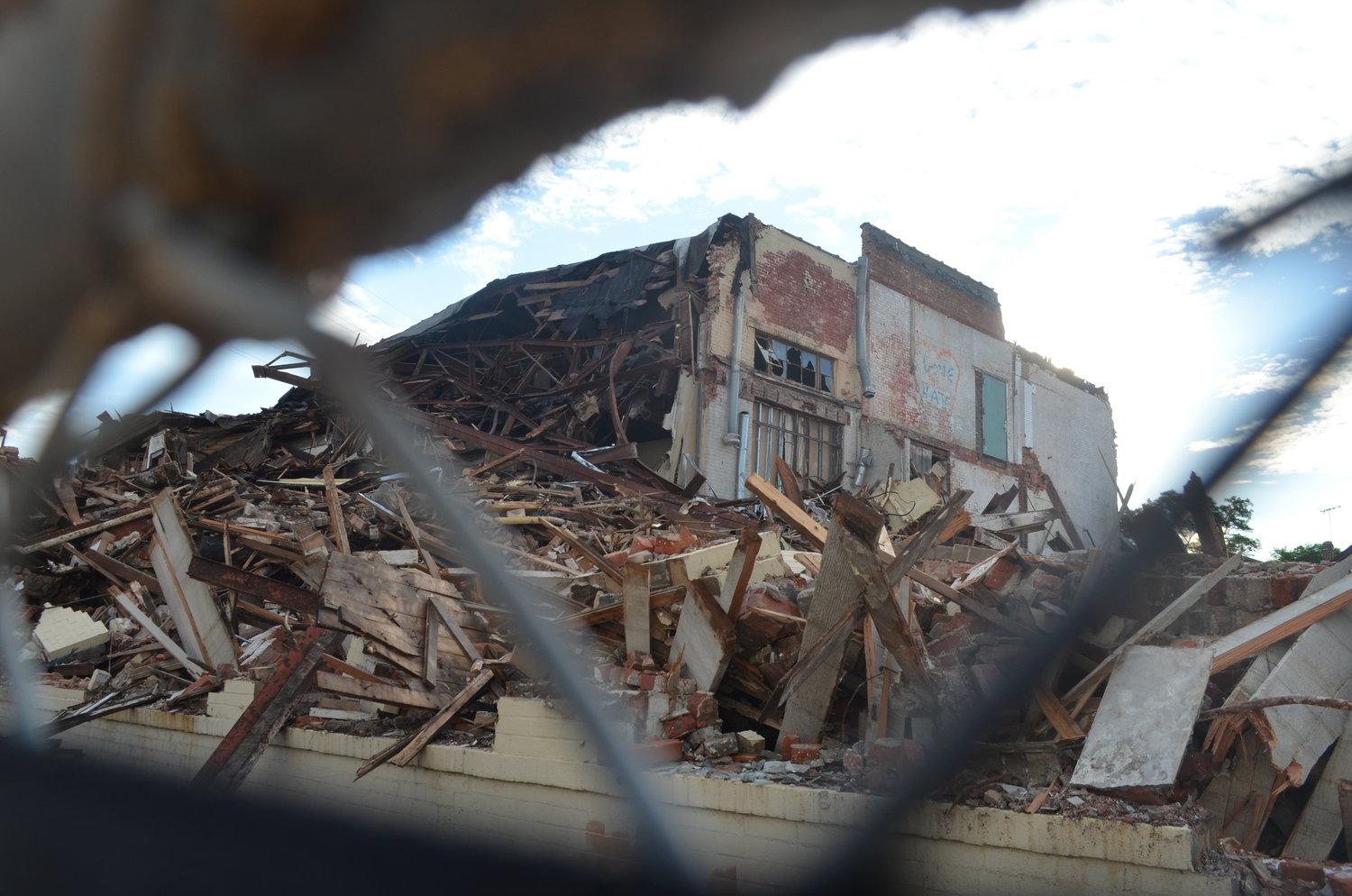 The new housing planned for the space once occupied by the feather factory has picked up nearly $23 million in financing.
Tim Baker/Herald
Previous Next
By Brian Pfail

The property at 4347 Broadway in Lynbrook was a former feather factory, opera house, and knitting factory and will soon be 201 transit-oriented apartments. The estimated $95 million project is scheduled to take two years. To many, it has been long overdue.

Seeing the start of the demolition, Harry Levitt, a former president of the Lynbrook Chamber of Commerce, said it was “a great day in the village to finally be rid of the eyesore that we worked very hard and closely with the village administrators starting almost 30 years ago.”

A state review board approved a variance March 10 for the development to be built by Garden City-based Breslin Realty. Last November, the Town of Hempstead Industrial Development Agency approved a 30-year payment in lieu of taxes plan, what is called a PILOT. Much of the project’s funding, $22.7 million comes from San Francisco-based investment firm, PCCP.

Breslin Realty stepped in five years ago to convert the structure into a high-density residential complex. Breslin’s chief development officer, David Orwasher, told the Herald in June, “We’re happy and proud to be a contributor to the revitalization of the walking downtown in the Village of Lynbrook,” and that “this is a noble project that will add value across the board to the residents of Lynbrook.”

Due to its proximity to the Long Island Rail Road station, the 278,014-square-foot development is geared towards young professionals who commute to Manhattan. “I think it should bring in a lot of new blood to Lynbrook–a lot of new people,” said Lynbrook Chamber of Commerce President Cory Hirsch.

“I’m hopeful that it should continue bringing new businesses, and I think it’s a great thing for Lynbrook to have these apartments that’ll be right on the train–it’s very convenient to people (and) hopefully (will) entice people to move to Lynbrook.”

It will also provide 205 spaces in its parking garage along with a retail cafe, clubroom, concierge and rooftop terrace along with other amenities. Ten percent of units will be designated for affordable housing–those below 130 percent of the area’s median income.

“I grew up in Lynbrook, and I walked past that building for the past 20-plus years.” Hirsch said. “It’s really nice that from an eyesore that was just a decrepit rundown building, we’re getting this gorgeous new apartment complex.”

The new construction where the “eyesore” once stood will operate as a possible stimulus to Lynbrook’s economy. Hirsch believes it the Lynbrook community attractive to a new demographic.

Holiday Inn Express and Marriott Courtyard expressed interest in the site but those projects did not progress and the building remained vacant.

Support for change has been widespread. Jeff Greenfield, a board member of the directors of the Chamber of Commerce, said, “I applaud Mayor (Alan) Beach and the current village board on removing this blight in the down business district.

“They succeeded where two previous administrations failed. Credit also goes to David Orwasher of Breslin Realty for his persistence with Rabbi Singer when others failed. A great team effort for enhancing (the) quality of life in Lynbrook for generations to come.”
Report an inappropriate comment