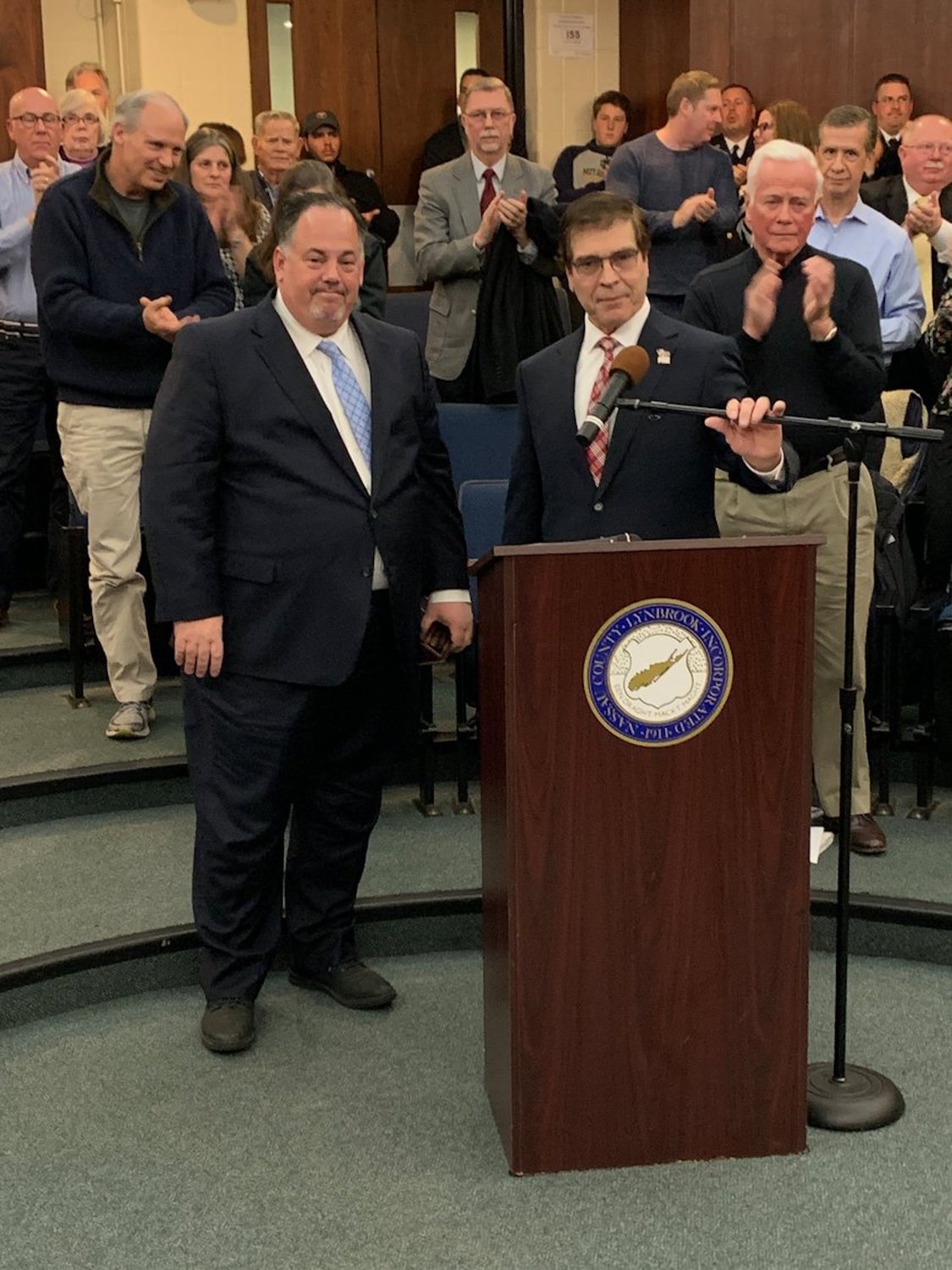 Lynbrook Mayor Alan Beach said the village was taken by surprise when Rite Aid announced it was closing. Above, Beach, right, with Deputy Mayor Michael Hawxhurst at a board meeting.
Mike Smollins/Herald
By Mike Smollins

has been the pharmacy manager at the Lynbrook Rite Aid since it opened in November 1995, but even he was among those who were shocked to learn that the store was set to close on Wednesday, after the Herald went to press.

“I was very surprised, and I thought this store was running well and we were told that it was profitable,” he said, “so it did come as a surprise to myself and my staff. A lot of customers are upset because they found this was their neighborhood drug store, it was something many of them could walk to and most of them are very sad we’re leaving.”

Giovanniello said that he wasn’t sure why the store, at 400 Sunrise Highway, was closing, but the announcement to staff was made abruptly earlier this month.

In an emailed statement to the Herald, a Rite Aid spokewswoman said that the company regularly reviews its locations to ensure that they are meeting the needs of customers communities and businesses, and the Lynbrook store was one of 145 stores it chose to close between last fall and this June.

"A decision to close a store is one we take very seriously and is based on a variety of factors," the statement read, "including business strategy, lease and rent considerations, local business conditions and viability and store performance. We review every neighborhood to ensure our customers will have access to health services, be it at Rite Aid or a nearby pharmacy, and we work to seamlessly transfer their prescriptions so there is no disruption of services."

The news was met with wonder and disappointment from many of the store’s longtime customers. Amanda Whitney said the business has been handy for her over the years.

“As a new mom close by, it was convenient for me to pick up baby items,” she said. “So I’m definitely disappointed about the store closing suddenly.”

Lisa Scotto Blank said she was fond of the employees there.

“I’m so upset they are closing,” she said. “I’ll miss the store and the staff.”

Helene Belding said she believed that competition was too much for the store.

“CVS has a stranglehold on Long Island,” she said. “You can’t throw a rock without hitting one.”

The Lynbrook store was open daily from 7 a.m. to midnight, and offered prescription home delivery, sold food and beer, offered money transfers, and had a station where customers could check their blood pressure. It also provided several types of immunizations.

According to a news release posted to Rite Aid’s corporate website on April 14, the company’s full year revenues increased by $525 million to $24.6 billion in 2021, its sales increased by 12 percent, its pharmacies generated $379 million in operating cash flow and reduced net debt by $212 million. It also noted a strong fiscal outlook for 2022 and 2023.

Lynbrook Mayor Alan Beach said he has not been provided with details as to why the store closed.

“I have no particulars,” he said. “It was a surprise to the village.”

Building Department Superintendent Brian Stanton said he was looking into the issue. “We are very concerned as a village when something that size closes up,” he said.

Beach said he was seeking to find out if the owner planned to sell it for another use, noting that it is a large parcel of land and he hoped that it wouldn’t be vacant for too long. The village has several projects completed or in the works. It recently ushered in the Cornerstone at Yorkshire apartment complex, a four-story, 80-unit, $24 million apartment building at the site of the former Capri Lynbrook Motor Inn. Construction will also soon begin on a $95 million, 201-unit transit-oriented apartment complex at the site of the former Mangrove Feather factory.