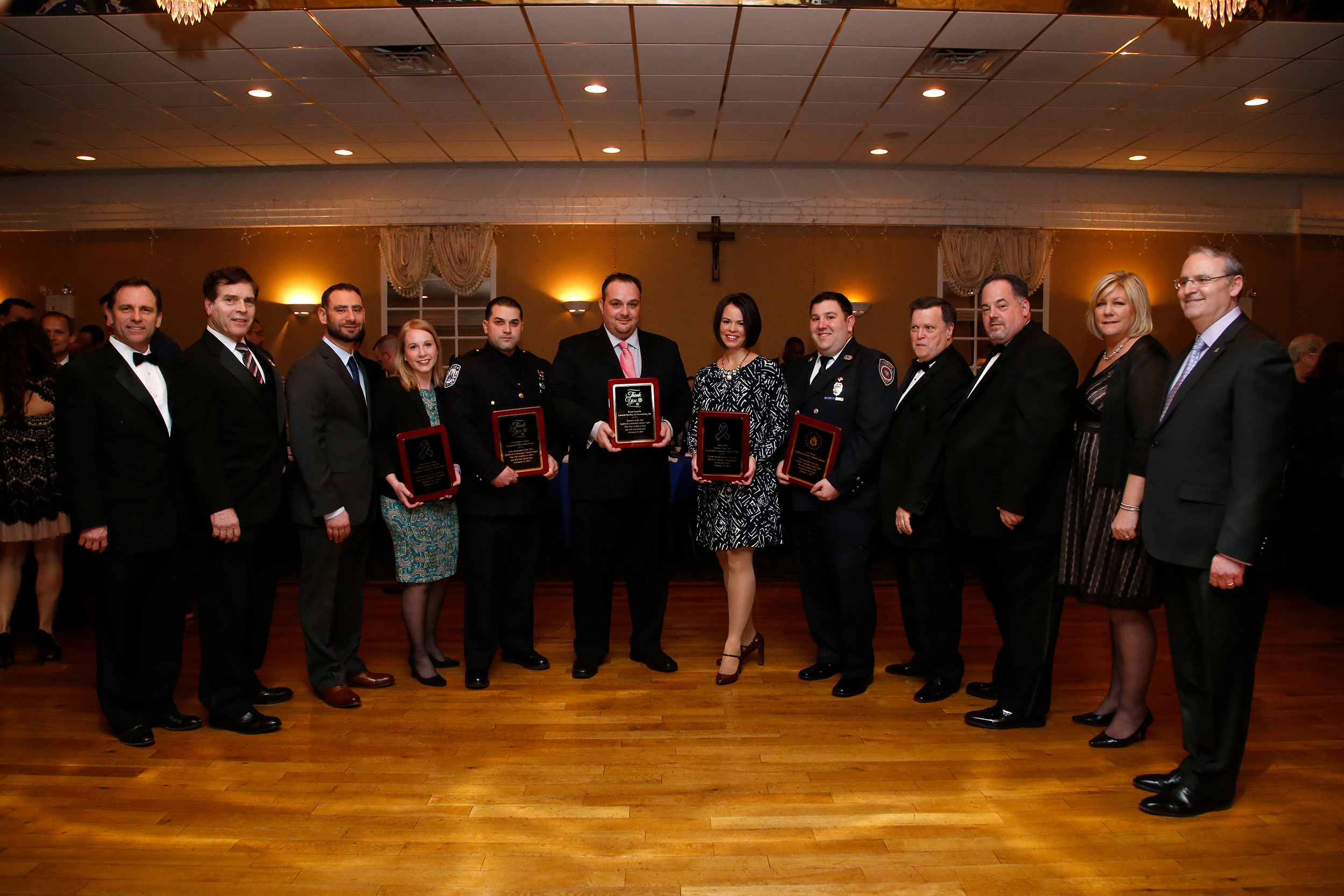 Brett and Eileen Linzer, third and fourth from left, were among the award recipients. They were honored with the Humanitarians of the Year Award.
Sue Grieco/Herald 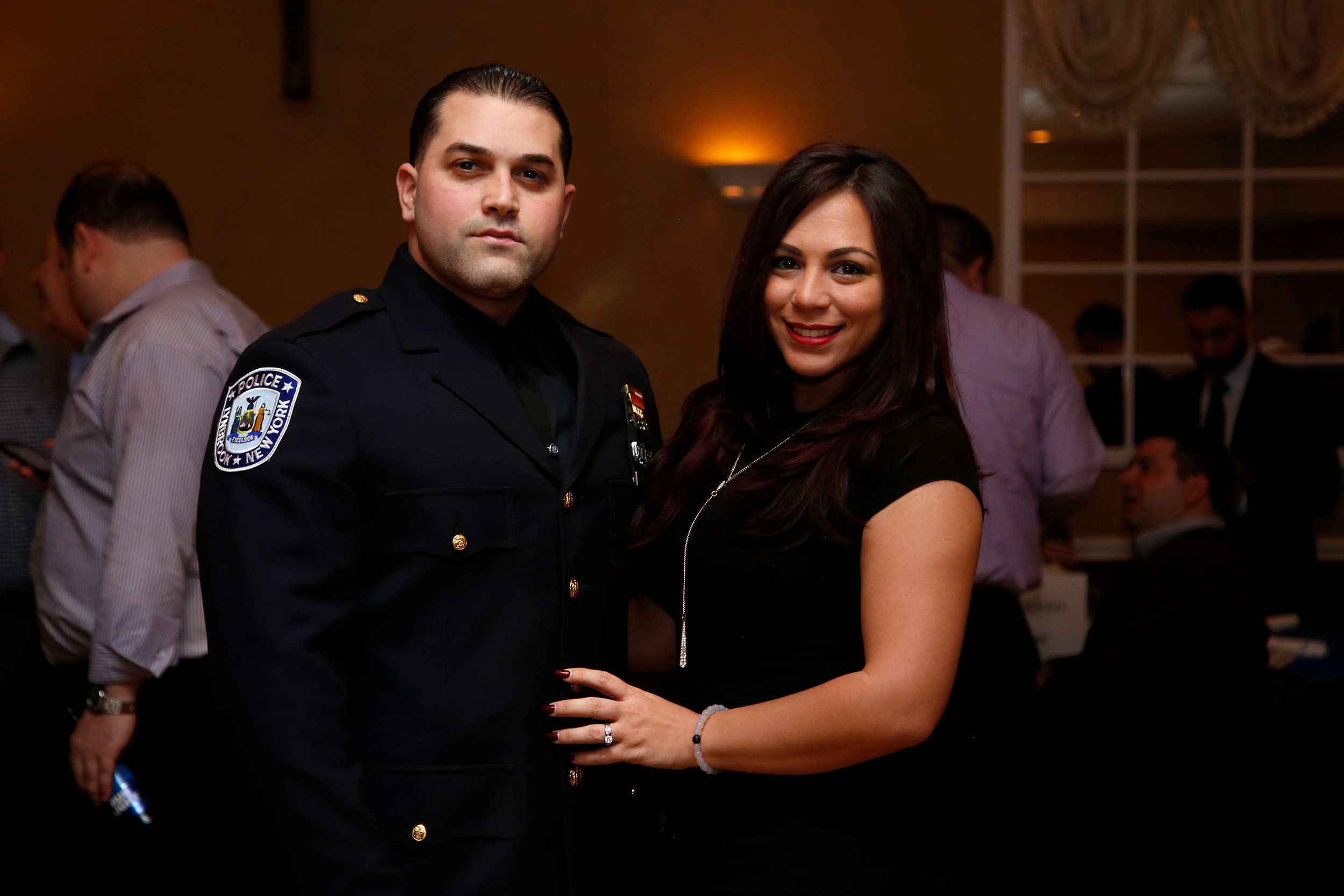 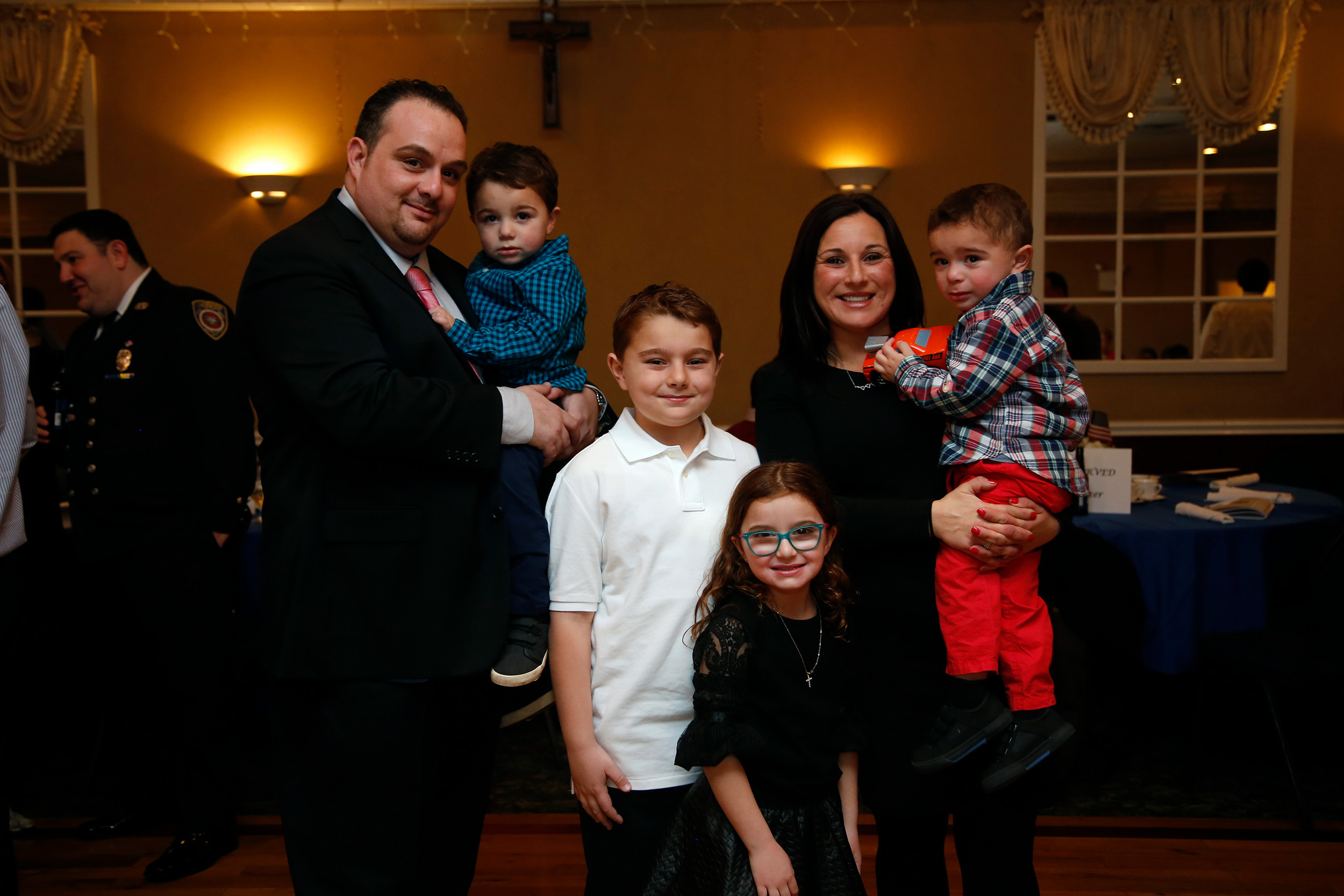 Bryan Lanzello, left, celebrated with his family after his company, Lanzello Roofing and Remodeling, Inc., was named Business of the Year at Lynbrook Mayor Bill Hendrick’s annual awards ceremony at the Saint Mary’s Knights of Columbus on Feb. 17.
Sue Grieco/Herald 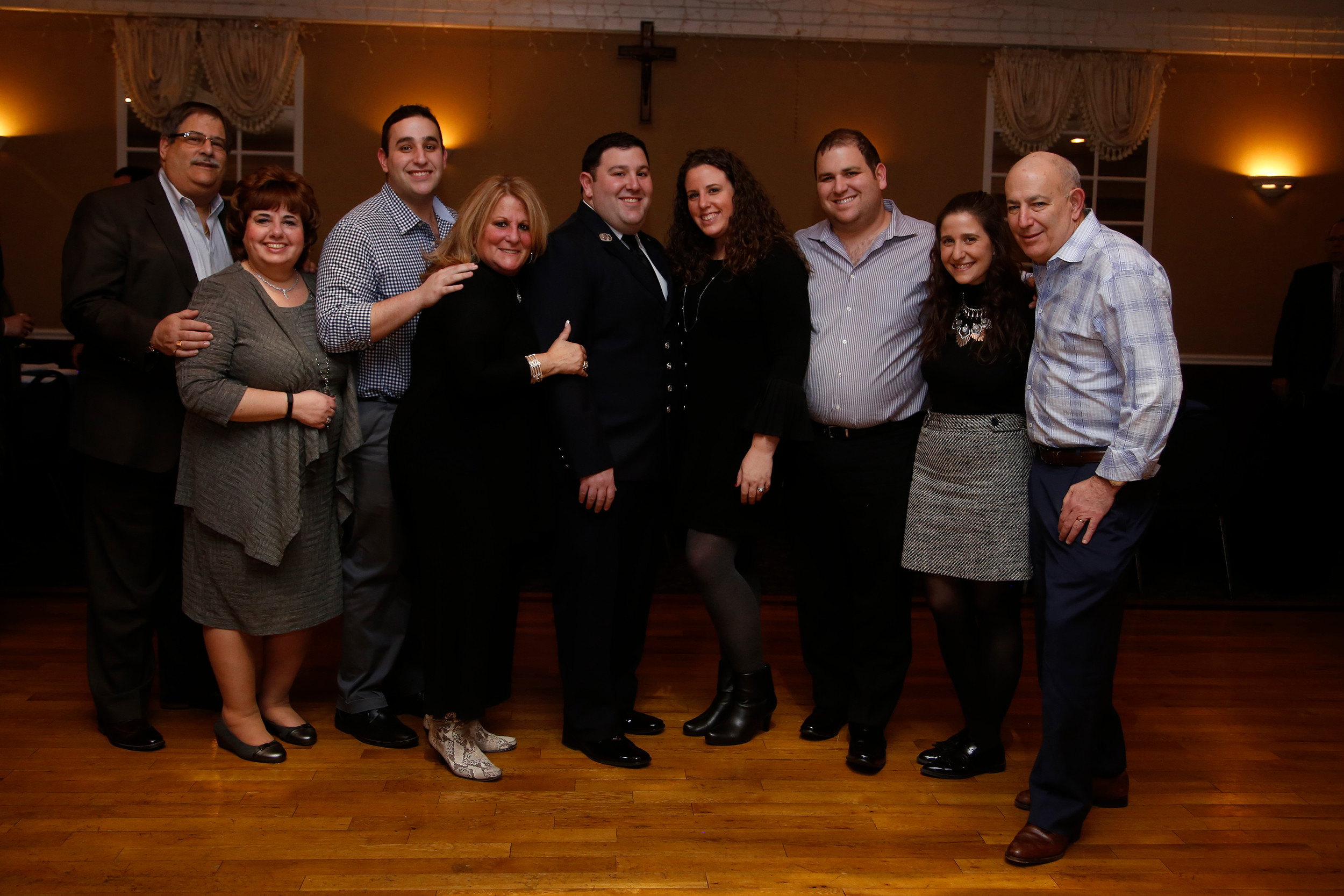 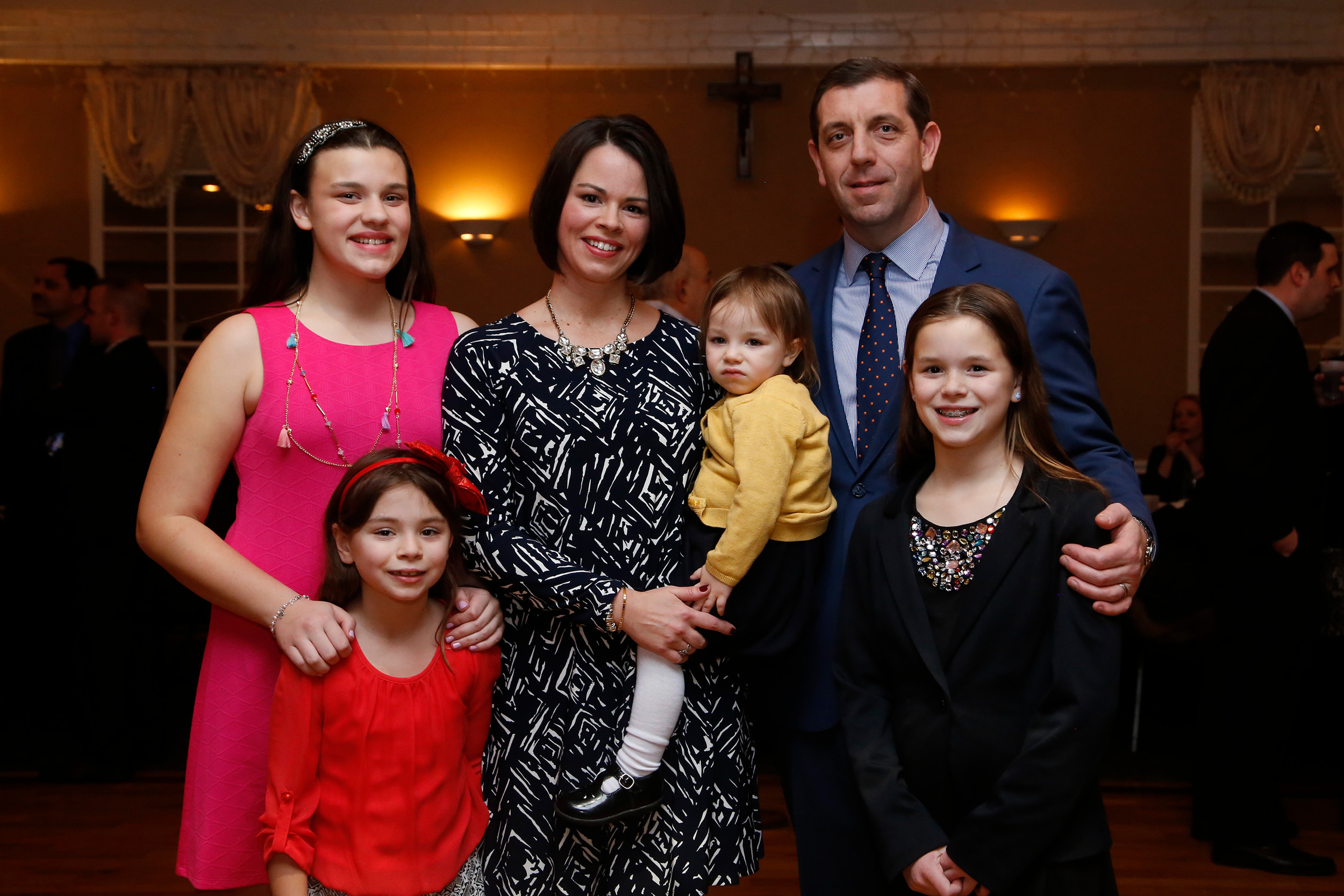 Susan Kelly, center, was awarded Citizen of the Year and enjoyed the honor with her husband, Alan, and children Elaine, Erin, Colleen and Cara.
Sue Grieco/Herald
Previous Next
By Mike Smollins

Among those honored at the event were Eileen and Brett Linzer, who were named Humanitarians of the Year for their work with the Quinn Madeleine Foundation.

The foundation was set up in their daughter’s name. Quinn died when she was just more than 14 months old from complications of Niemann-Pick Disease, Type A, an inherited disease in which a person has an abnormal lipid metabolism that causes a buildup of harmful amounts of lipids in many of their organs.

The Linzers created the foundation in 2014 as a way to help and grant wishes for terminally ill children, including those who suffer from the disease that took their daughter’s life. Eileen Linzer said she was not expecting to win the award.

“It was surprising and it was very humbling,” she said. “It was not something that we were looking for recognition. Everything we do is not entirely altruistic in our minds, because it’s in our daughter’s name. We’re really doing it to keep her name out there and help kids like her. But it was surprising and wonderful.”

According to its Facebook page, the Lynbrook New Vision Party is a local village group that is open to all residents and businesses regardless of any political persuasion, who are sincerely interested in continuing to make Lynbrook a great place to live and work. The awards night recognizes the businesses and residents that help Lynbrook thrive.

“The Mayor's Community Awards Night is always a premier event for Lynbrook,” said Hilary Becker, the executive director of the LNVP. “It gives us the opportunity to recognize the amazing accomplishments of some of our finest residents.  This year's honorees are truly exemplary of the people who go above and beyond in the service to their Lynbrook community.”