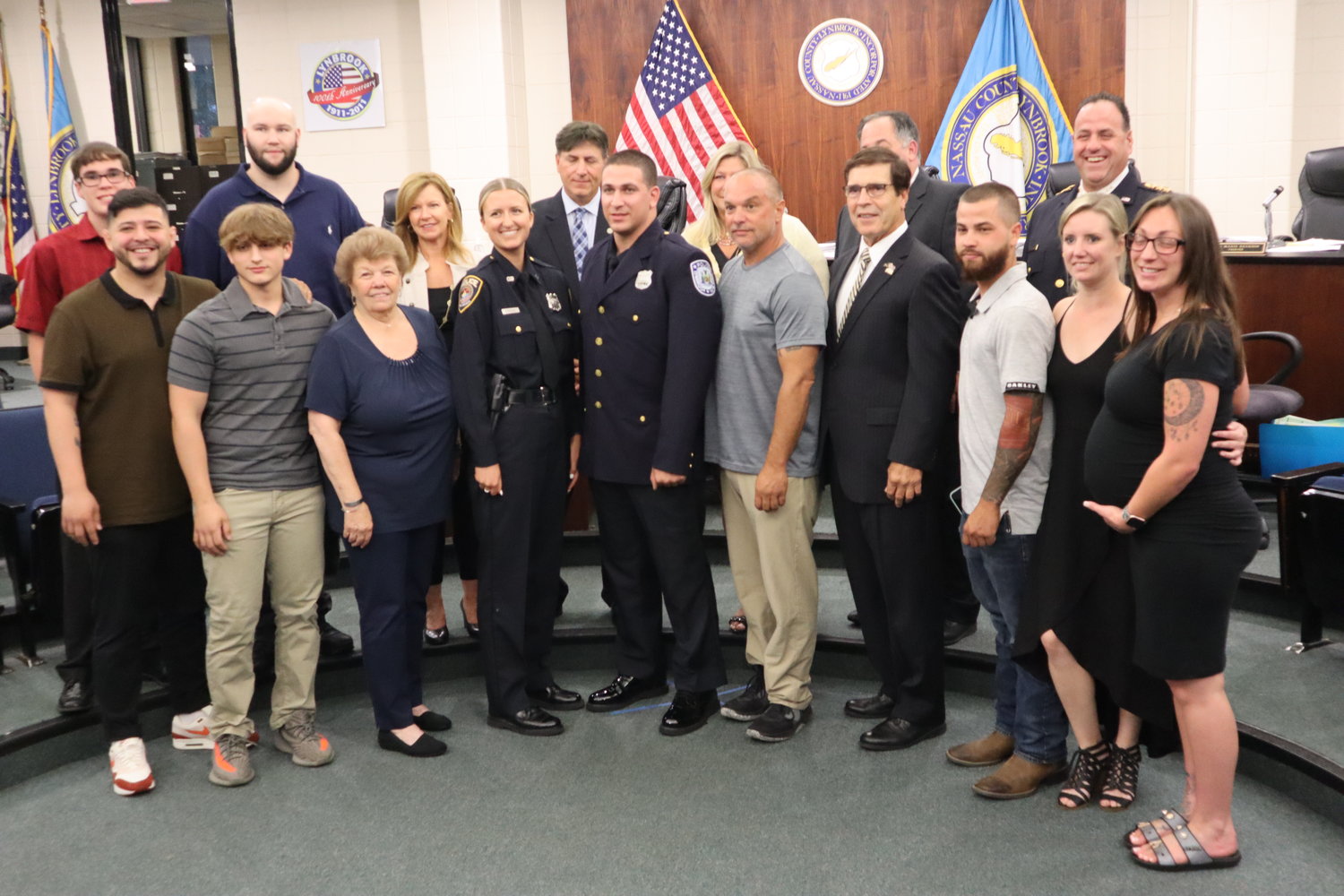 Newly minted Lynbrook Police Officer Joshua Crowley took his oath to protect and serve, surrounded by family and members of the village board.
Daniel Offner/Herald 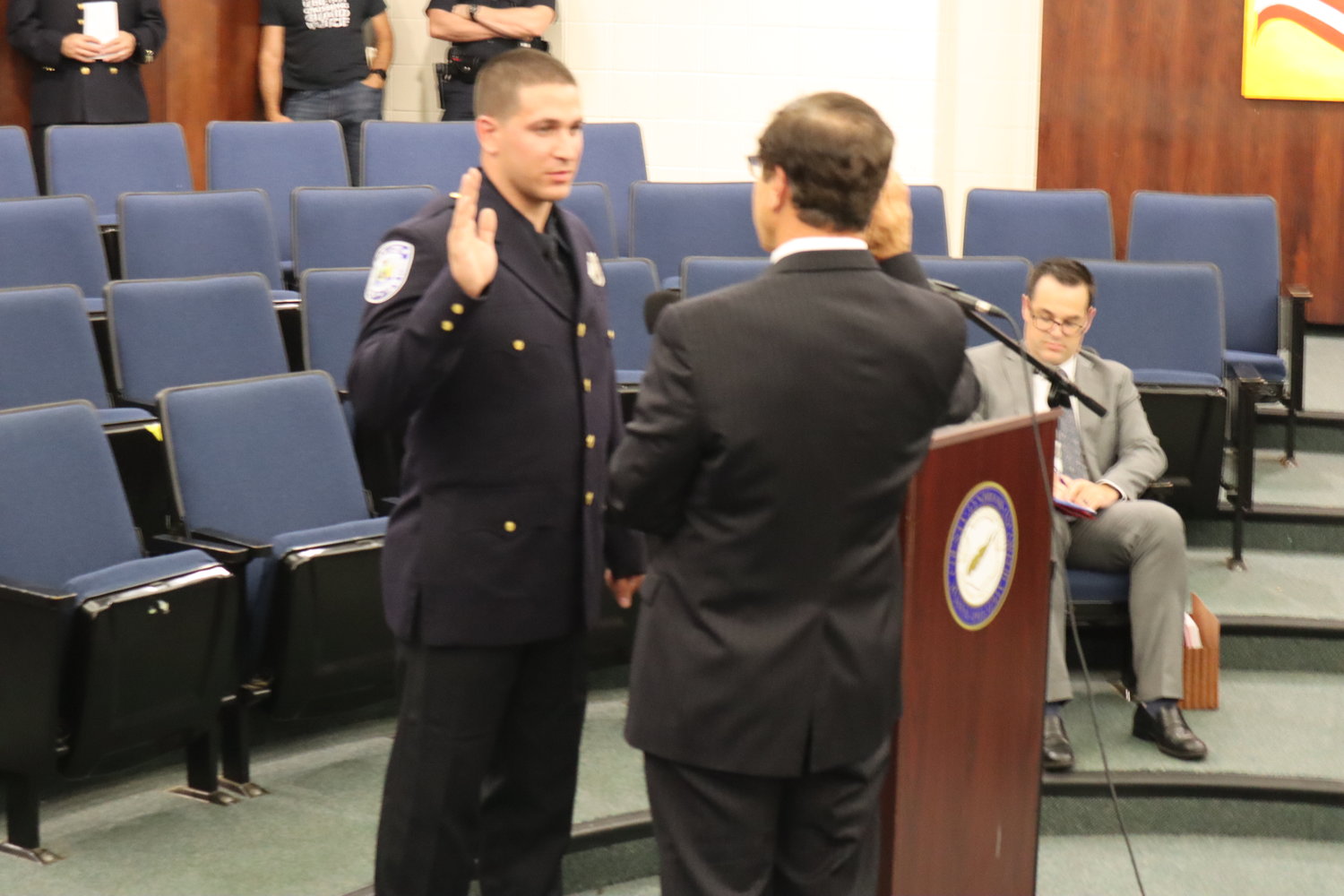 Lynbrook police officer Joshua Crowley was sworn in at the Lynbrook village board meeting on Sept. 12.
Daniel Offner/Herald
Previous Next
By Daniel Offner

Decorated New York City Police Officer Joshua Crowley was patient and kept the faith in his quest for a position with the Lynbrook Police Department.

Crowley, who grew up in Mastic and graduated from Eastport South Manor High School in 2012, left the NYPD to return to Long Island. Several departments jumped at the opportunity to hire him, including Nassau County and Garden City, who made offers.

He held out for the Lynbrook P.D., and his patience paid off.

“Josh said that after interviewing with the Lynbrook Police Department, he knew this is where he wanted to work,” Lynbrook Police Chief Brian Paladino said. “He turned down guaranteed employment by Nassau County and Garden City police departments until we were able to hire him this past July.”

Crowley was sworn in by Mayor Alan Beach at the village board meeting on Sept. 12, taking the oath to represent the village with the utmost pride every day, officially making him the newest member of the Lynbrook police force.

When the Garden City Police Department made Crowley an offer, he was told he would need to respond in 12 hours, or they were going to move on with their search.

He went back and forth between the departments to make his decision when he felt the need to reach out to his father, Steven, for words of wisdom.

His dad reminded him that all he had been talking about prior to this point was working with the Lynbrook Police Department.

“He called me up and I asked him to have faith in me,” Paladino replied. “We were able to clear some guys and get them out of the way and told Josh and got him set as far as who’s working. It sounded like I gave him a winning lottery ticket. It was the coolest thing. I love when I can give someone a chance.”

Paladino said that when he offered Crowley the job, he was happy and excited. He said got a little broken up on the phone after being given the chance to work at his first pick of police departments on Long Island.

“We like it when people say yes and they want to come here,” Beach said. “We love that.”

After high school, Crowley, like many high school grads, went off to college at the start of the fall semester. His collegiate career was short-lived.

He recognized college was not right for him at that point in his life. After two months, he made the decision to return home to work as an electrician with his father, with whom he is very close.

It wasn’t until five years later he was drawn to the idea of pursuing a career in law enforcement and decided to join the Police Academy at Winston-Salem, North Carolina in 2017.

He was one of six recruits from Long Island approached by Winston-Salem Police Sgt. R.B. Readus, to make the 600-mile trip down south.

Unfortunately, it was around the time his mother fell ill. He decided to return home to help out during that difficult time.

His father would continue to serve as an inspirational figure in his life. Through his determination and work ethic, Crowley motivated himself to pursue his dream of a career in Law Enforcement. He re-enrolled at Suffolk Community College, where he would earn an associate degree in Criminal Justice in 2019.

Not long after that, he joined the rank and file of the NYPD, the nation’s largest police force. He was assigned to the 69th Precinct in Canarsie, Brooklyn, where he received two excellent police duty awards and two meritorious policy duty awards for his service to the department.

“That’s pretty incredible for the short time he was there,” Lynbrook Police Chief Brian Paladino said.

Apart from his duties as a police officer, Crowley said he loves spending time with his family, who were in attendance at Lynbrook Village Hall for his induction.

He thanked everyone who was able to join them, including his mother, father, and grandmother, who he said helped make him the man he is today. He also thanked his girlfriend, Kelsey, and his brother and sister, Nicholas and Sara, for making the trip out to see him sworn in.

“Thank you for everything. You always helped me out with everything,” Crowley said.

“Thanks to the chief, the mayor, and the inspector. You guys were always good to me even while going through the process.”