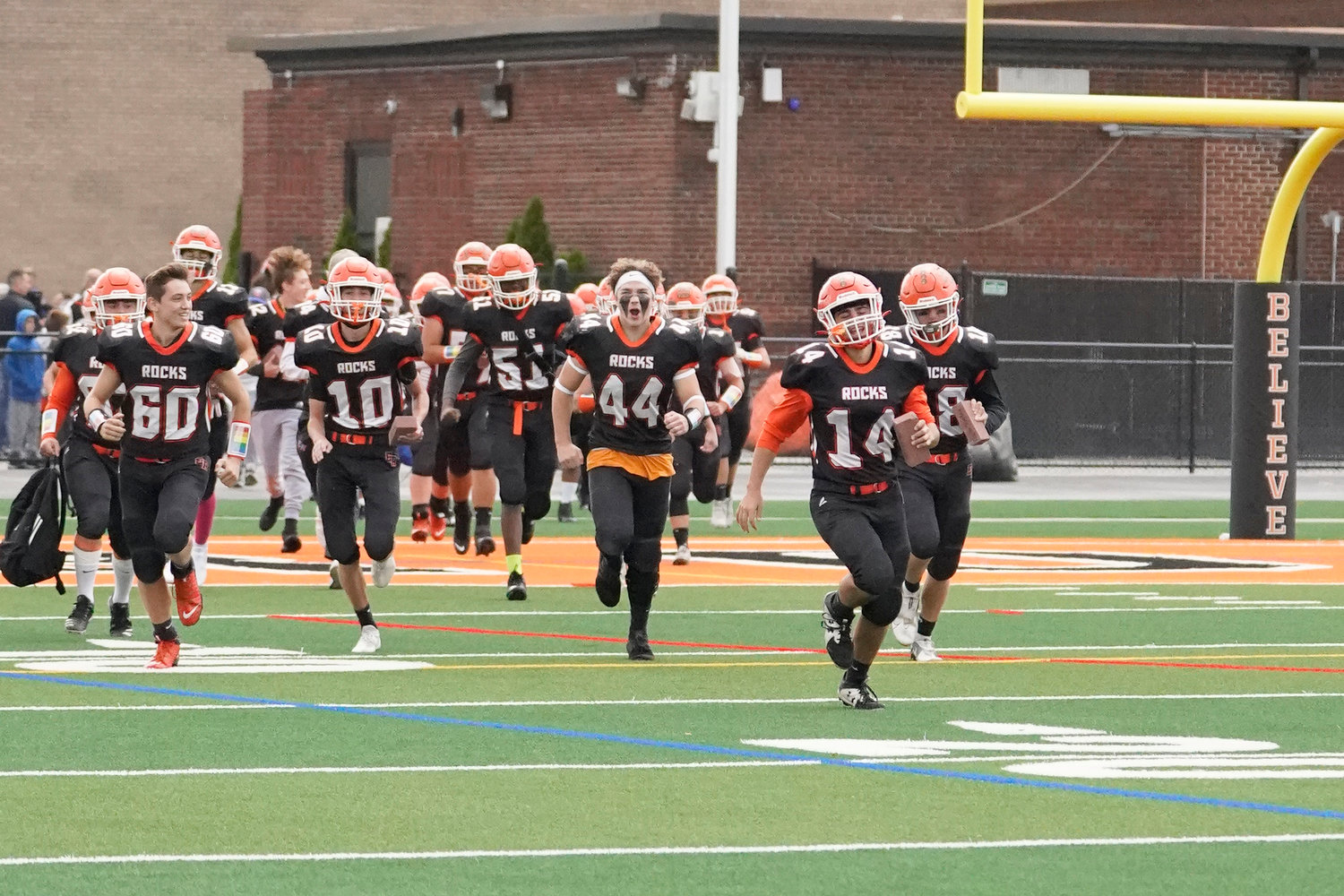 On Saturday, East Rockaway High School christened its new field, which finally became a reality after voters approved a $27.7 million bond in 2019. The Rocks stormed the field before the inaugural game.
Ron Manfredi/Herald 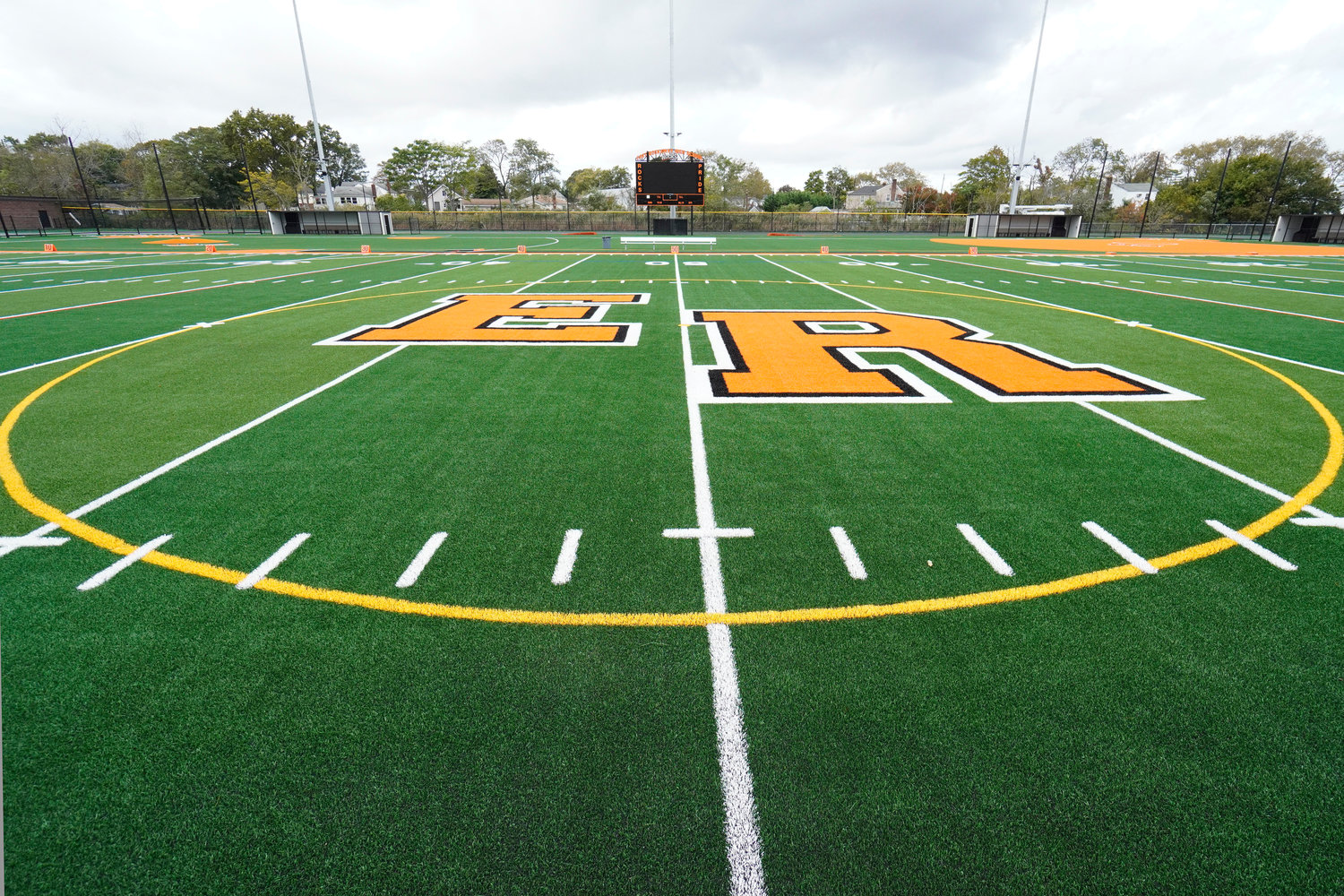 The artificial-turf fields will be used by many teams.
Ron Manfredi/Herald 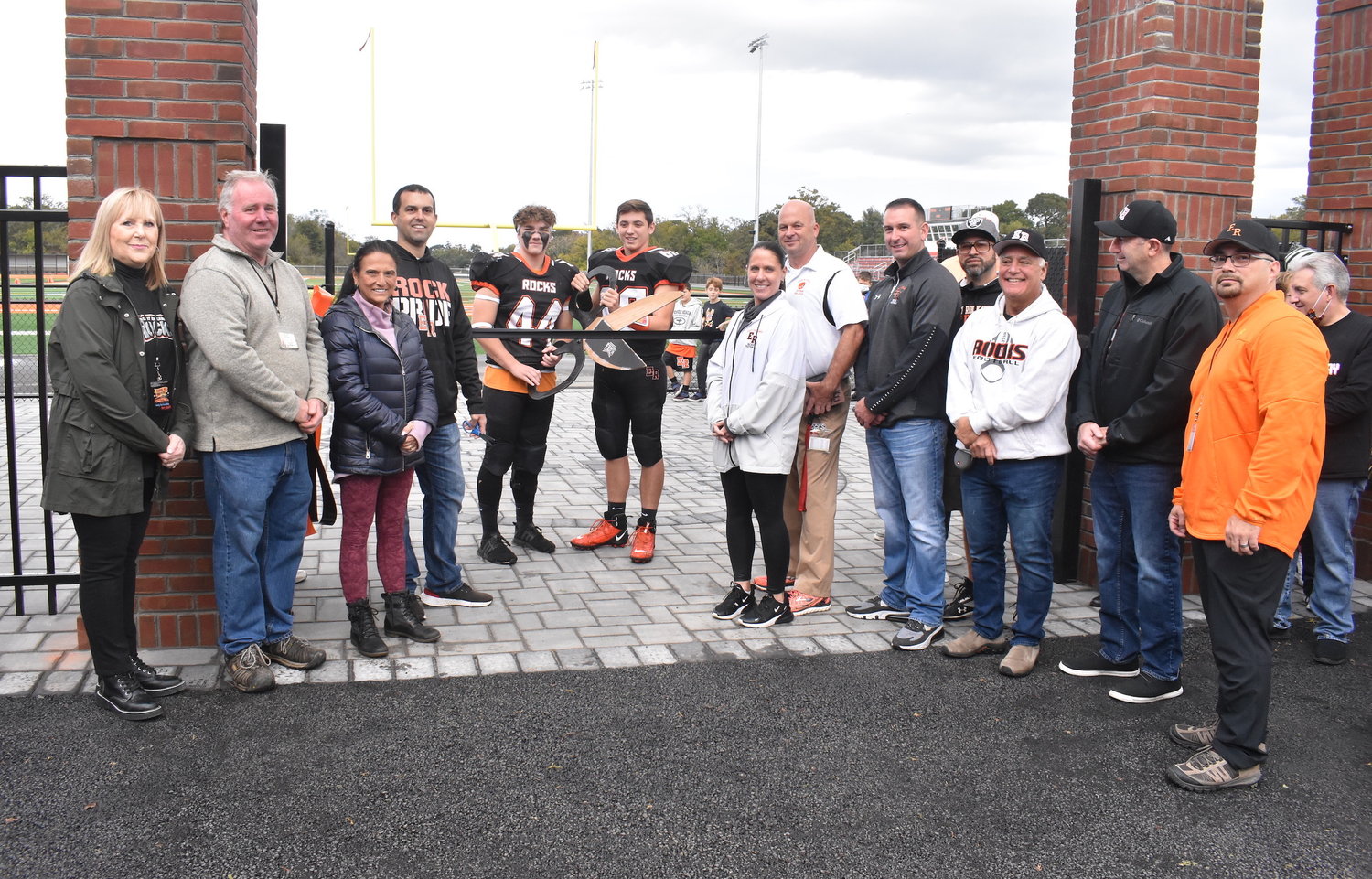 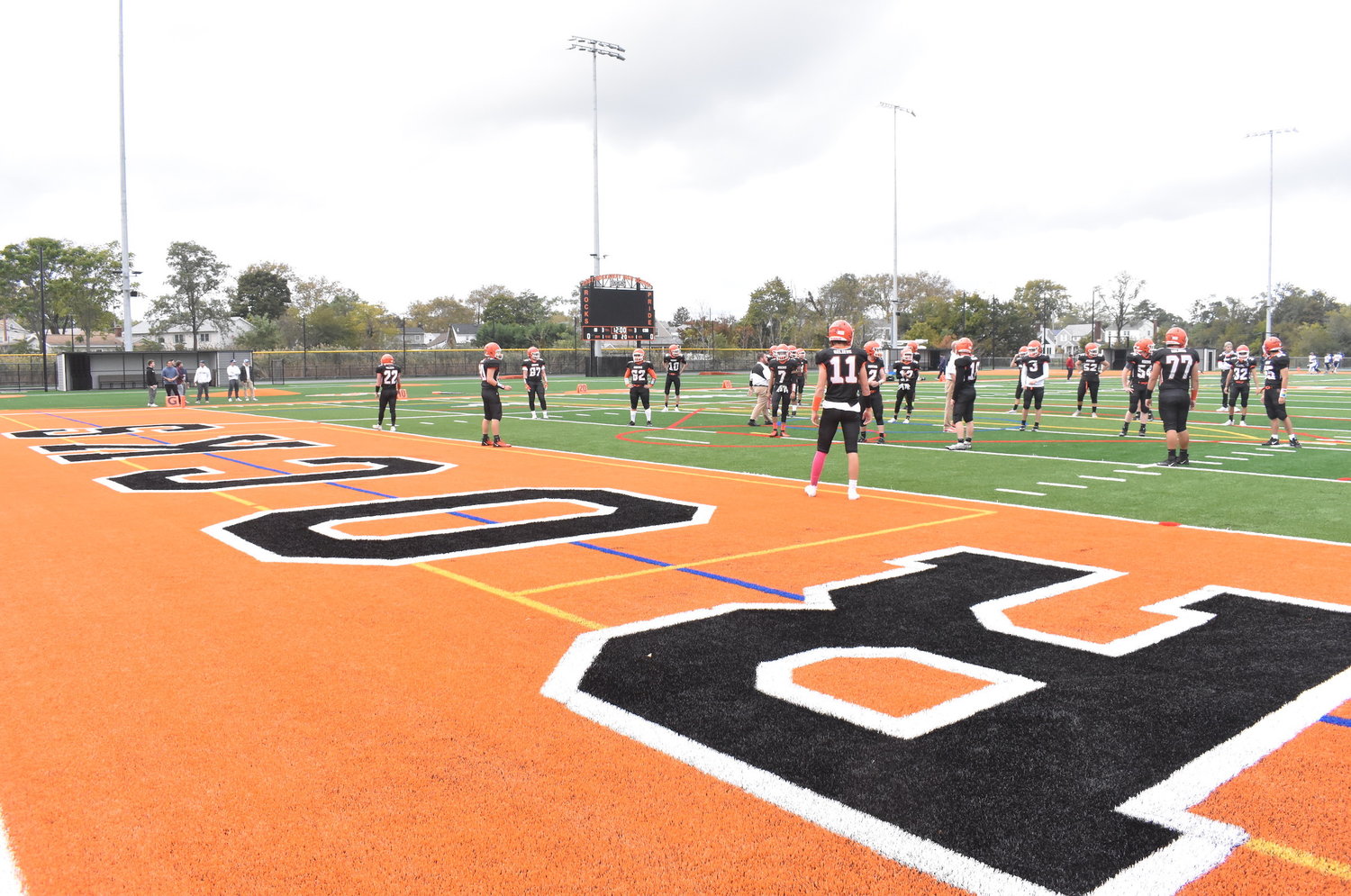 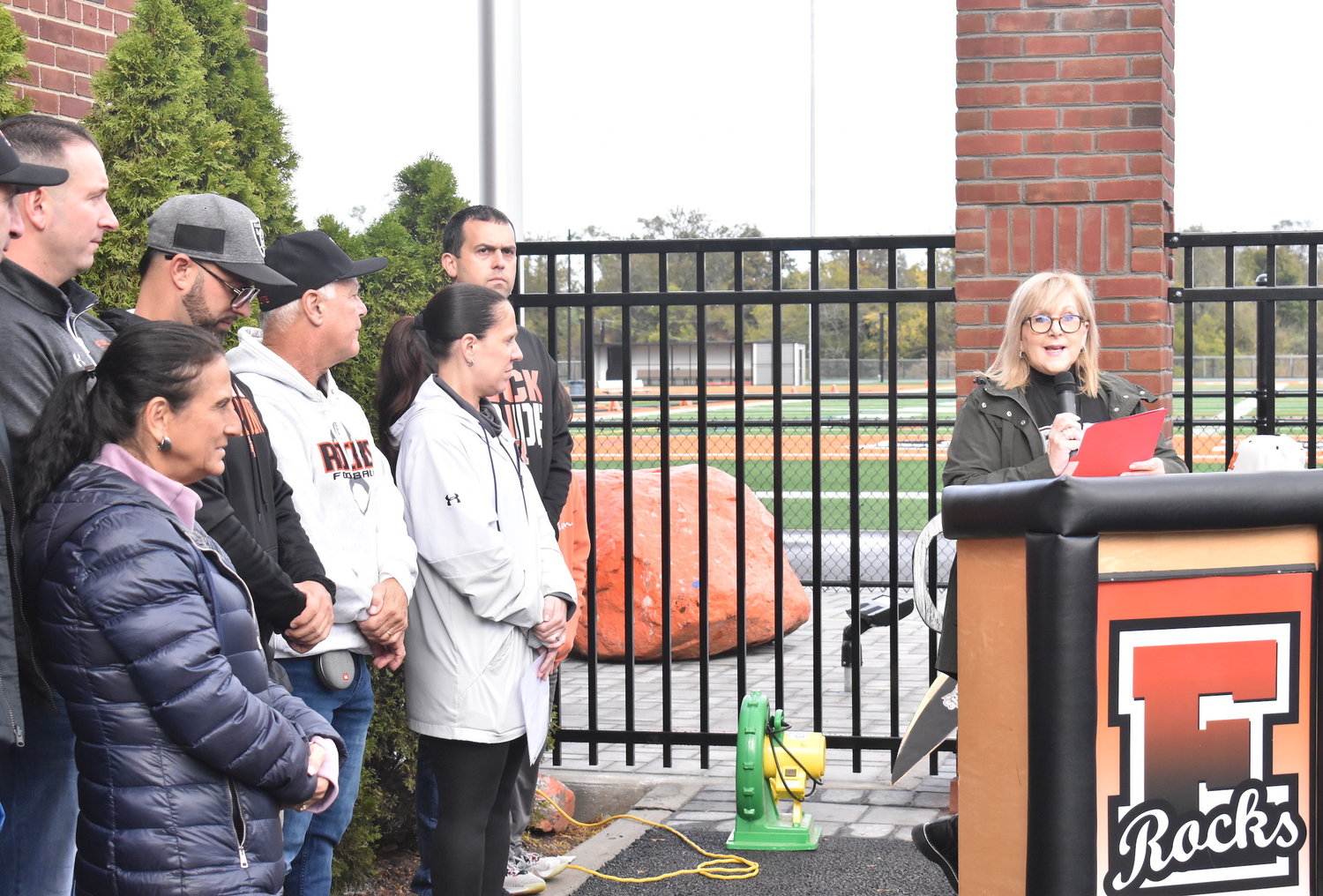 Superintendent Lisa Ruiz thanked everyone who helped prepare the field for the team’s last game of the season.
Courtesy East Rockaway School District
Previous Next
By Mike Smollins

When the East Rockaway Junior-Senior High varsity football team stepped onto the new artificial-turf field at the school’s revamped athletic complex last Saturday, it marked the end of a years-long campaign to improve the facility.

The game also marked the first contest on the new field, which was built after voters approved a $27.7 million bond in November 2019.

“We’re thrilled that our seniors were able to play their last game of the regular football season on our extraordinary new field,” Superintendent Lisa Ruiz said. “We had a huge turnout from the community, and we want to thank everyone for their continued support throughout this process. Even though the complex is not 100 percent complete, this was a great way to highlight the wonderful opportunities that our district will offer its students and community in the future. We’re looking forward to an official ribbon-cutting ceremony of all the completed work in the spring.”

Before the game, which the Rocks lost, 28-12, Board of Education trustees, administrators, teachers, students, residents, alumni and village officials held a first ribbon-cutting ceremony for the new complex. The event included performances by the high school marching band and the varsity cheerleading squad.

“I know the football team was psyched about it for some time,” Schaffer said. “Just those initial steps of the kids onto the field, running onto the field before the game started, you could just tell that they were excited, and for some of them it was, as seniors, their last home game, so it was a really memorable experience. It’s really uplifting.”

In addition to varsity football, the complex will be used by the boys’ and girls’ soccer, track, cross-country, lacrosse, baseball and softball teams as well as the cheerleaders, and for phys. ed. classes. Schaffer said it could also be used for special events, such as movie nights. The complex has lights, allowing for night games, he added, and because the field is artificial turf, games can be played in bad weather because there will be fewer puddles when it rains compared with a grass field.

In addition to the new fields, the bond covered many projects at the high school and the Rhame and Centre avenue elementary schools. They included:

— New bleachers and a press box at the high school.

— Installation of about 750 feet of bulkheading to protect the fields from Mill River.

— Renovation of art, science, and family and consumer science classrooms at the high school.

— Alterations to the high school’s technology building to create four single restrooms for use during outdoor community and sporting events.

Athletic Director Gary Gregory, who started work Aug. 27 after serving in a similar role at various districts over the years, said he was excited about the possibilities created by the new complex.