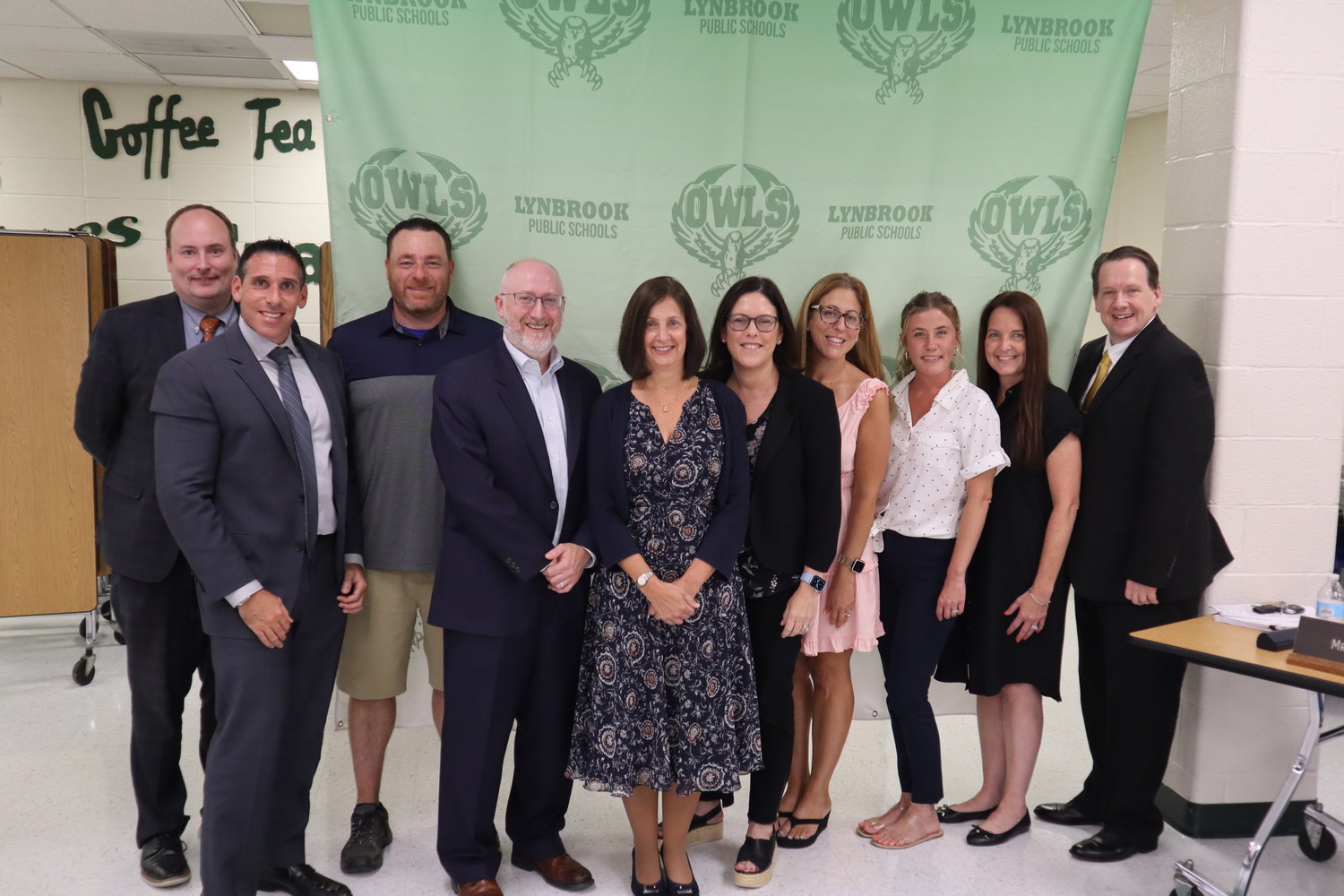 Superintendent Melissa Burak, center, announced her plans to retire in July 2023, after 30 years in the district.
Courtesy Lynbrook Public Schools
By Daniel Offner

Lynbrook Schools Superintendent Melissa Burak has set her retirement calendar, and plans to stop down on July 1, 2023, after 30 years of service.

It was a bittersweet moment for members of the Board of Education, which voted to accept her resignation letter, expressing their heartfelt gratitude for her many years of service and for helping elevate the district to new heights.

Burak’s career with Lynbrook Public Schools started as a second-grade teacher at Marion Street Elementary School, where she initiated a year-long pen pal project with students from East New York, before going on to Lynbrook High School, where she taught computer literacy. She received her administrative certification and was appointed director of communications, technology, and library media services shortly thereafter.

Burak went on to help launch one of the first districtwide area networks in Nassau County, helping bring the internet directly into the classroom. She moved up the ranks, becoming the district’s assistant superintendent of business where she oversaw payroll, benefits, and accounts payable. She helped shore up the district’s long-term financial stability by creating and funding several reserve funds, and helped establish Lynbrook as one of the few districts to receive the Government Finance Officers Association’s Certificate of Achievement in Financial Reporting.

Following the unexpected death of Superintendent Santo Barbarino in August 2012, the Board of Education voted to appoint Burak interim superintendent.

A few weeks in her new role, communities along the South Shore of Long Island were ravaged by Hurricane Sandy, which swept up the coastline, leaving major flooding and wreckage in its wake.

“When you stepped in as interim superintendent, it was a really difficult time,” Vice President Ellen Marcus said. “There was a lot going on, but you didn’t hesitate. You took the helm, and we would not have been able to get through that without you.”

Burak’s leadership during this time prompted parents across the district to hang up lawn signs expressing their desire for her to be appointed to the role permanently.

Marcus said that throughout her 11 years as the district’s superintendent, Burak accomplished great things for the district, including the addition of new staff members, a new curriculum, new programs, and the expansion of the district’s facilities. “You’ve always had a vision. You’ve had a way to direct how that should be implemented, and always follow through with it,” Marcus said. “So, you really leave behind a lasting legacy here and will be sorely missed.”

Board Secretary Lesli Deninno said that she still remembers a time when she had one of those same signs out on her own front lawn. “One thing that resonates with me is your visibility at everything in the district and your ability to know what’s going on everywhere and having everyone’s child in your best interest and being involved, whether it be a sporting event, an art event, a music event, or an academic event. You’re just always there and always involved and that’s what resonates with me,” Deninno said.

Burak is often seen in the hallways of the schools asking students insightful and provocative questions, which helped her to shape several school programs including the redesigned Voyager program, Owls Flight School, One to World Tablet program, the STEAM program, and the Owls Success Academy.

“People don’t realize how much she does and how passionate she is because she is generally pretty quiet and humble,” Trustee Sean Murray said. “But get her behind closed doors and there is nothing that this woman wouldn’t do for your children.”

Lynbrook Public Schools implemented new programs for students with disabilities, and students learning English as a new language. She increased support for the social and emotional well-being of students by increasing the number of social workers, guidance counselors, and psychologists. Under her stewardship, the district saw an expansion of facilities, including a music suite, an artificial-turf field, tennis courts, basketball courts, a baseball field, a refurbished track, science labs, an auditorium, installation of new elevators, and the establishment of the 48,000-square-foot Alice Marie Bresnihan wing at Lynbrook High School.

“The time and effort you put into this place is remarkable, and your professionalism and thoroughness are pretty impressive,” Trustee Patrick Palleschi said. “There is not much that gets past you which is exactly what you need, somebody leading the ship like this, because every detail needs to be accounted for and you have done that, from what I’ve seen over the last two years.”

Burak faced her greatest challenge to date in March 2020, when she was tasked with navigating the district through the impact of the Covid-19 pandemic. During this time, she placed the health and safety of students, faculty, and staff above everything else working to help the community by overseeing the distribution of thousands of meals to families affected by the resulting economic downturn.

Burak knows it takes a village to raise a child. Her staff and the Lynbrook community answered the call. “I really could not ask for a harder working team,” Burak said. “Together we make Lynbrook. None of the things that were in the resolution would have ever happened if we didn’t work together as a team. I thank the community for your support and for entrusting your children with us and I hope that trust continues, and together, Lynbrook will grow and strive to be even better and better. I know there are more good things to come, some sooner rather than later, and I look forward to sharing all the good news with you for the next nine and a half months.”