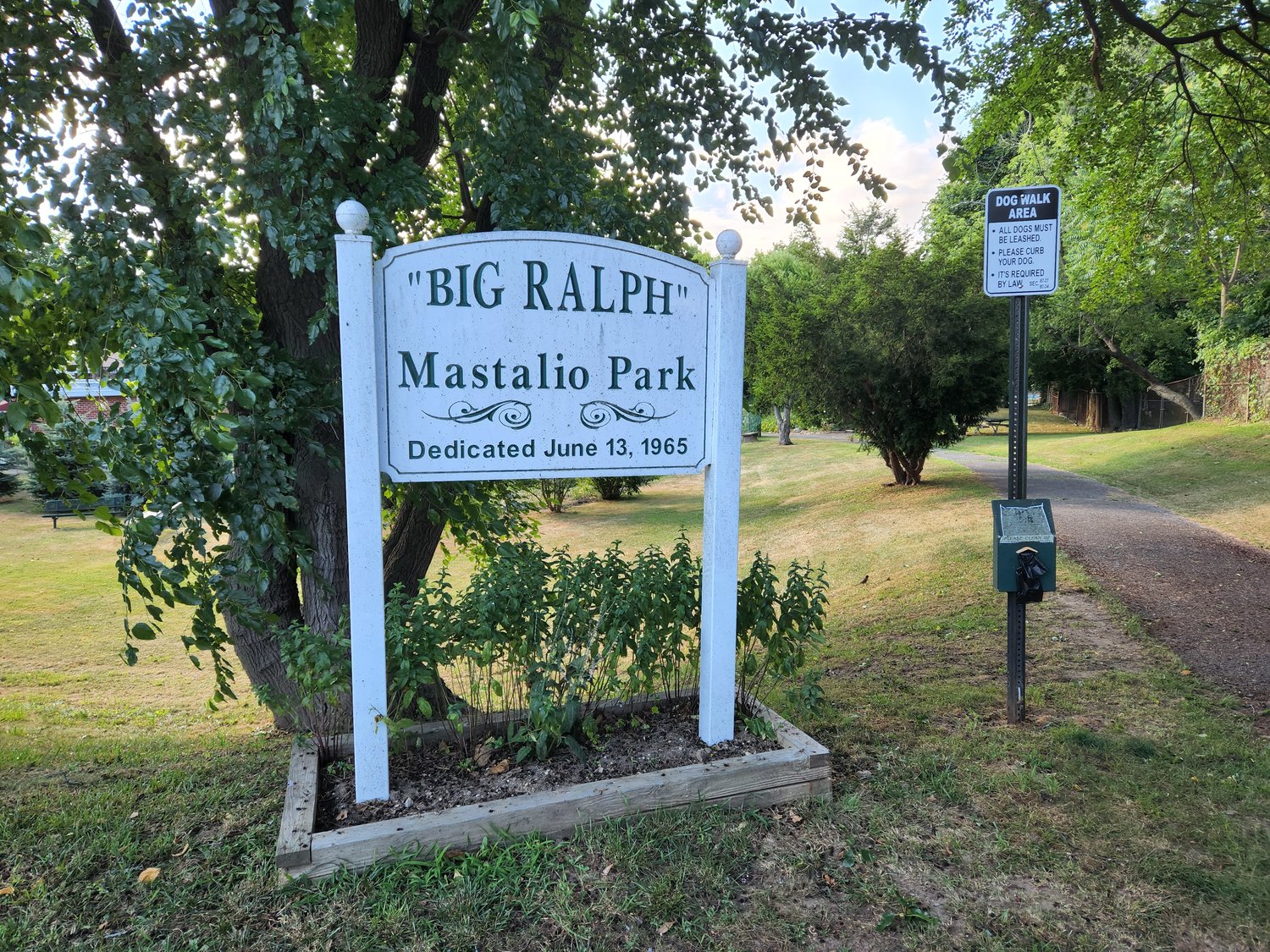 In 2013, Big Ralph Park was rededicated to Big Ralph Mastalio, who served in both World War I and World War II. He received the Bronze Star and Purple Heart. Mastalio, who was committed to the city, volunteered as a fireman for Glen Cove for 32 years.
Roksana Amid/Herald 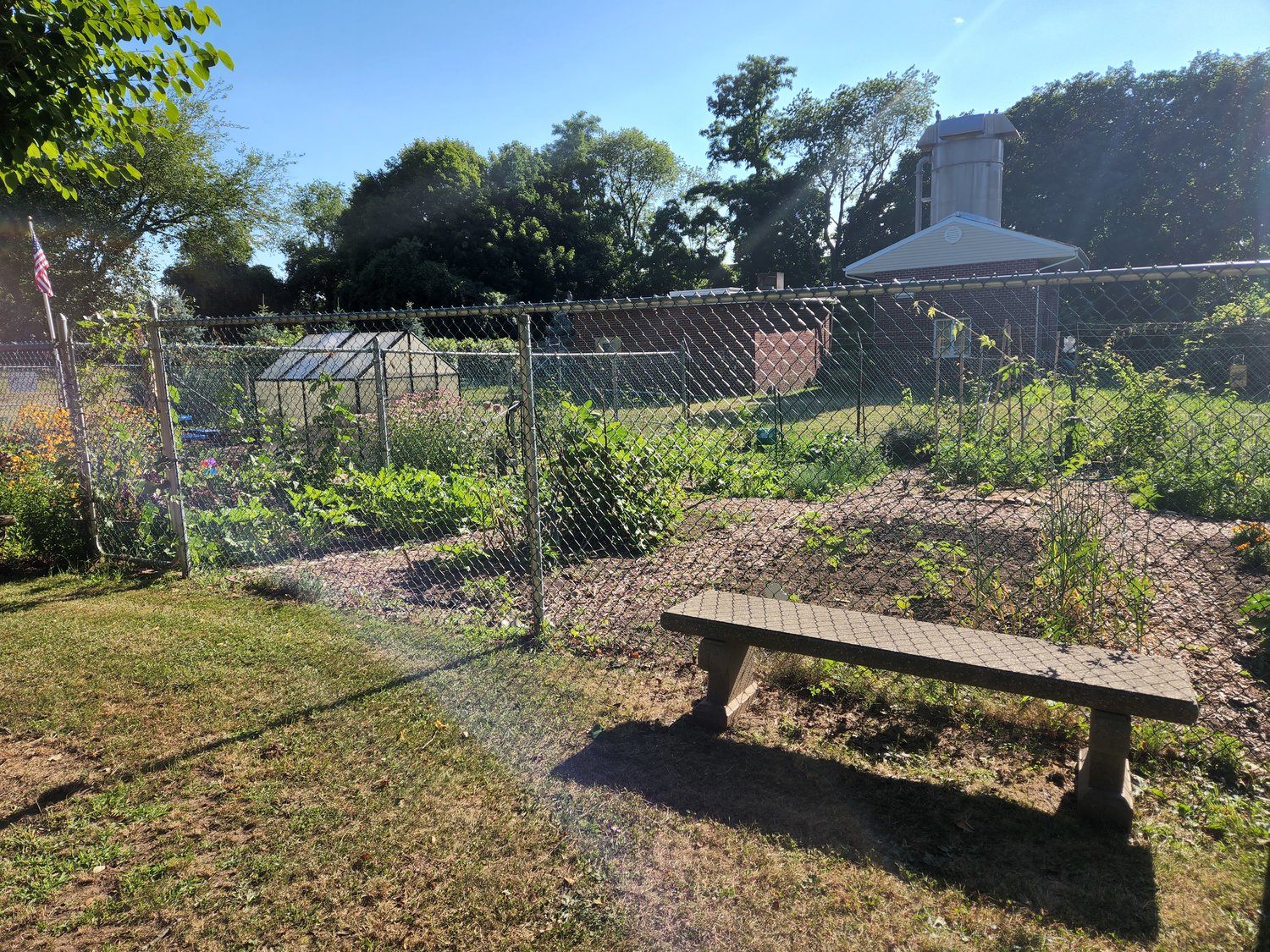 Inside Big Ralph Park is the Youth Bureau community garden. It is fenced in and not available to the public.
Roksana Amid/Herald 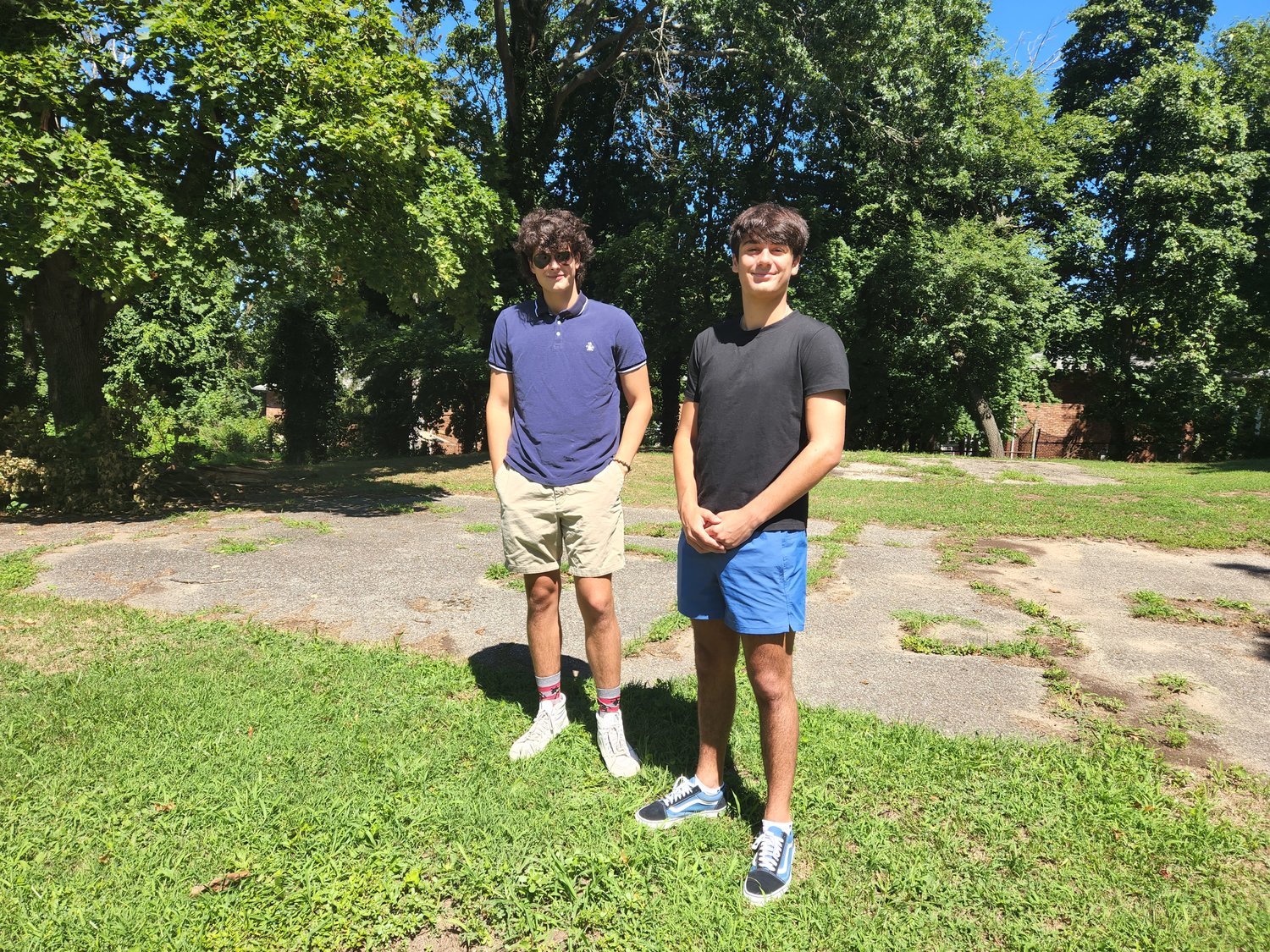 Glen Cove High School seniors William Santamaria, left, and Aiden Costella, plan to renovate Big Ralph Park, where one issue is cracked cement. They have started a Gofundme page to raise money for supplies.
Roksana Amid/Herald
Previous Next
By Roksana Amid

Tucked away on the corner of Kelley Street, and situated near the Coles School, sits Big Ralph Park. It’s smaller than other parks in Glen Cove and is not a place that sees many visitors. There are cracks in the concrete on the park’s basketball court, handball court and what passes for a children’s play area. The lflora and fauna in the park are centered towards the middle, leaving the surrounding areas desolate.

“When I was a kid my two best friends lived in that area,” Aidan Costella, of Glen Cove, said. “When we would go to that area, we realized it was very unattended to. Our parents warned us about going to the park.”

The 17-year-old senior and class president from Glen Cove High School wanted to take the initiative after hearing the city’s youth lament over the lack of places to go in the area. It was then that Costella decided to use his role as a leader not only inside his school, but outside of an academic setting to help his community.

Costella founded Adolescent_Advancement, currently in its beginning stages on Instagram. He hopes this organization will catalogue efforts made to improve the community by youth, as well as help provide leadership opportunities to future generations of youth. Big Ralph Park is the first project by Adolescent_Advancement.

When Costella reached out to his friend and classmate, William Santamaria, he knew he wanted to be involved because Santamaria said, “it would be a great change to the community.” He will help with the physical tasks when renovating the park, in addition to being the projects aesthetic designer. Santamaria brought Costella’s vision forward by drawing blueprints which were presented to city hall.

When Costella contacted city hall with his initial ideas, not all the plans were accepted. He was told he couldn’t change the wired fence in the middle of the park due to city infrastructure. He does, however, have permission from the city to proceed with their renovation.

“It’s fantastic when teens want to contribute in such a positive way to their community,” said Jacquelyn Yonick, secretary of the city’s Beautification Commission and Youth Program coordinator. She added that there were efforts made in 2009 to transform Big Ralph Park from an unused green space to a youth garden as well.

As it stands, Costella and Santamaria hope to create more pathways, incorporate bird baths and feeders, add more plant life, and add sources of water such as fountains and a pond. They also want to purchase more picnic tables, which are valued at $800 per table. But he needs help.

“If we don’t have the funds we can’t really start, “Costella, said.

To help with costs, Costella and friend Alessandra Juarez collaborated on a few ideas. They created an online campaign and will collaborate further on future fundraising events. As of Aug. 15, the Gofundme page has raised $790 of its $5,000 goal. While funds are highly appreciated, Costella also said he’s looking for supplies and anyone who is willing to help with physical renovations as well.

Glen Cove Mayor Panzenbeck stated that she is in favor of the students’ efforts in taking the initiative to renovate the park. “My only advice is don’t get such big ideas that you can’t complete,” she said.

Panzenbeck plans to contribute to the online campaign herself. Reminiscing on her time as a teacher at Levittown Central School District for 34 years, she said, “We support any students doing good for our community. It’s wonderful.”